I’ve always wanted the chance to stay in a vintage VW camper. In fact, it’s on my list of 50 things to do before 50 – the new, vaguely anxiety-inducing list I’ve created since turning 40. (50? I will surely never be 50 years old?)

I’ve done a couple of longer road trips in big, modern motorhomes and absolutely loved them – the simplification of life, minimal stuff, and that feeling of being away from the real world is magical. There’s something very relaxing about it taking half an hour and a trip to an outdoors tap to make a cup of tea.

I’ve always wondered though how I’d get on in something a little less luxurious. It hardly counts as roughing it in a van if your double bed comes down from the ceiling at the press of a button does it?

Happy Days is a family run business near Falmouth. They’ve been doing campervan hire in Cornwall for less than a year, but their two 1970s Volkswagen Westfalia Campervans are already proving very popular for weekend breaks and longer holidays. Both vans feature beautiful vintage interiors and are small but perfectly formed. They have full width double beds, space in the roof for a small one, and in good weather you could sleep another couple of people in a drive-away awning.

Now what I probably should have said when Happy Days got in touch, asking if I wanted to have a play with one of their vans for the weekend, is ‘that sounds amazing! How about doing something in the spring?’

What actually happened was that I was so over-excited that I looked at the calendar to find the nearest possible date I could feasibly do and said ‘Yes please! How about December 15th?’

I don’t know if you remember, but the weekend of December 15th was the one with the incredibly high winds and torrential rain. Couple this with a remote campsite on the most southerly coastline in the UK and it would be fair to say that it wasn’t exactly what you’d call optimal camping conditions.

The sound of rain on a camper van while you’re tucked up inside is ace isn’t it? We packed our blankets, downloaded some films onto the laptop, filled a bag with ginger biscuits, hot chocolate and jumbo salted peanuts, and off we went.

We picked up Olive, the aptly named green VW campervan of the pair at Happy Days, at teatime on Friday. At a sensible time of the year it would have been still light of course, but we managed a pretty smooth handover by torchlight, and I took the wheel confidently, putting Belle in charge of directions to our campsite, half an hour away. 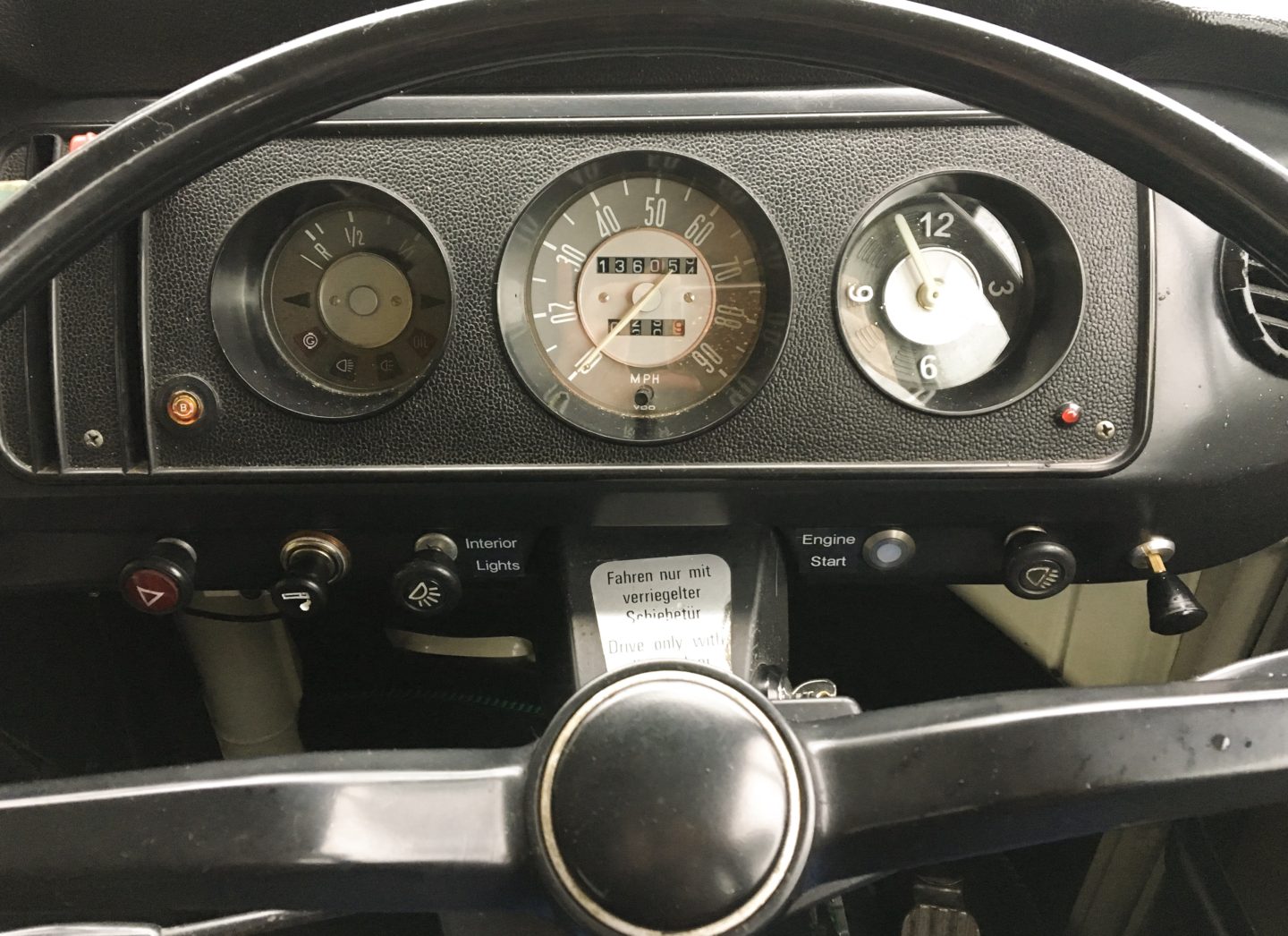 The ‘taking the wheel confidently’ bit is important. I’ve found over the years in these sort of situations that with Belle, the best thing to do is not let any nerves show at all, but to just assume the role of ‘person in charge who absolutely knows what they’re doing and definitely doesn’t have any doubts at all about how to change gear.’

As it happened, I absolutely did know what I was doing. Sure, the van is old, but my first car was a 1983 Talbot Samba, and then there was that mid 80s Metro I bought on eBay for £87 in 2008… it’s not like I’ve not driven my fair share of old vehicles. In fact, not wanting to brag, but I even did a difficult three point turn in the middle of a country lane after we missed the entrance to the campsite in the dark. So.

We arrived, luckily, before the rain had set in, so we were able to fumble around quite happily in the dark, connecting up the electric hook-up, getting the fairy lights and the heater switched on and cracking open the peanuts. This would normally then be the point in a mini-break where I pour a glass of wine, but not being especially keen on the idea of clambering over Belle in the middle of the night to then walk across a field in the rain to the toilet block, I was adhering to a self-imposed ban of all fluids after 6pm.

It was annoying mind, as I kept forgetting, eating a handful of peanuts, and then getting thirsty. Normal people: open wine here and enjoy. 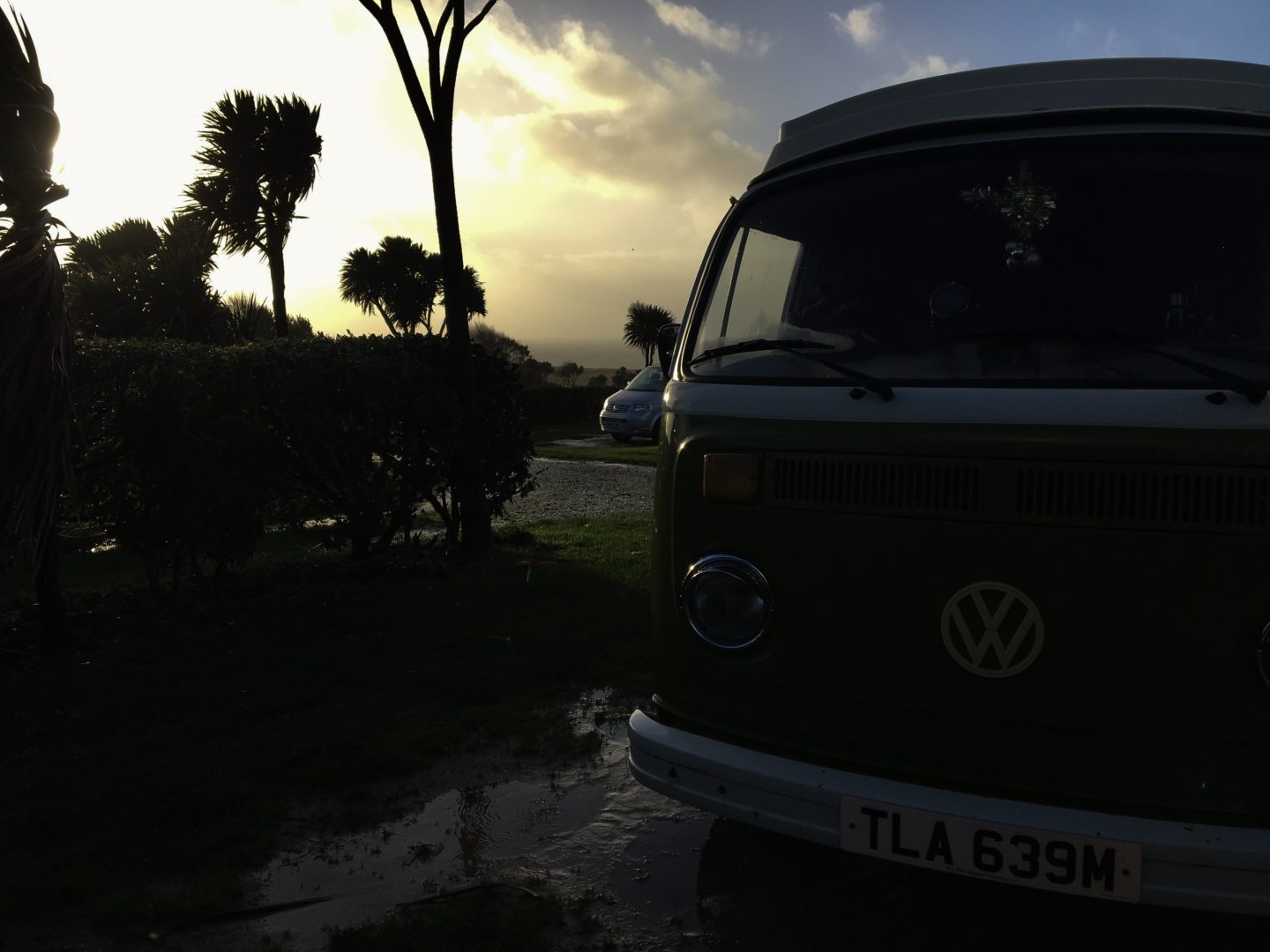 The sofa was very easy to convert into a bed – one swift action – and Happy Days had kitted us out with a super cosy duvet, pillows and extra blankets. Not that we needed them. Despite the weather outside, the tiny fan heater had us toasty in no time, so much so that we only needed it on for five or ten minutes at a time throughout the evening.

Olive had her own blankets too – a foil layer that we fixed around her windscreen and side windows to keep her insulated overnight, and to keep out the light too. (This would be especially useful in the summer when it gets light very early in the morning.) 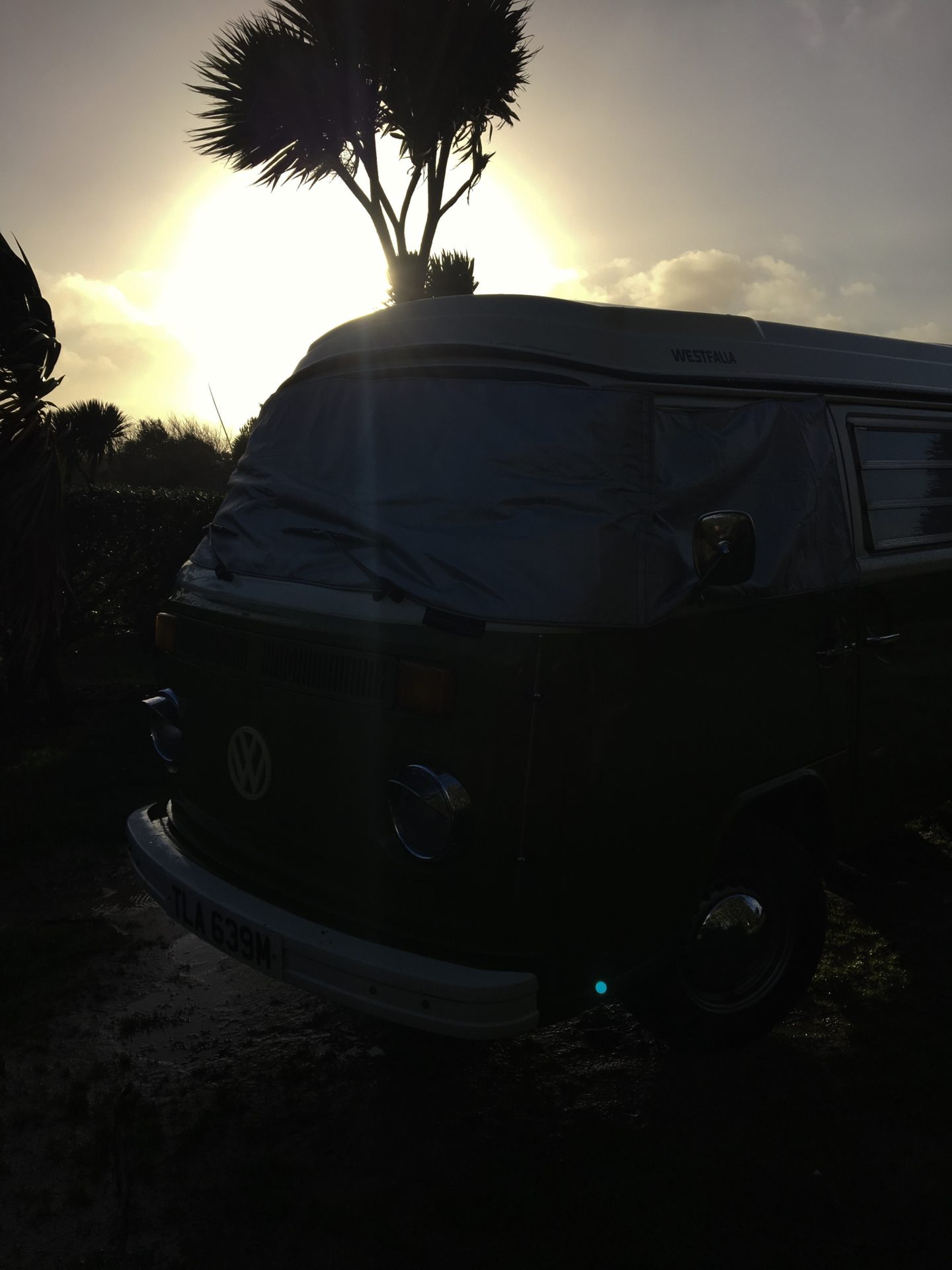 Overnight we weren’t cold at all, and slept well to the sound of the rain and the wind buffeting the van. We could hear the lighthouse too, calling eerily out to sea at regular intervals. It was pretty spooky, but in a fun way.

Come morning, we were able to see Olive properly in all her glory.

(We had about ten minutes of blue skies, where I rushed around taking pictures!) 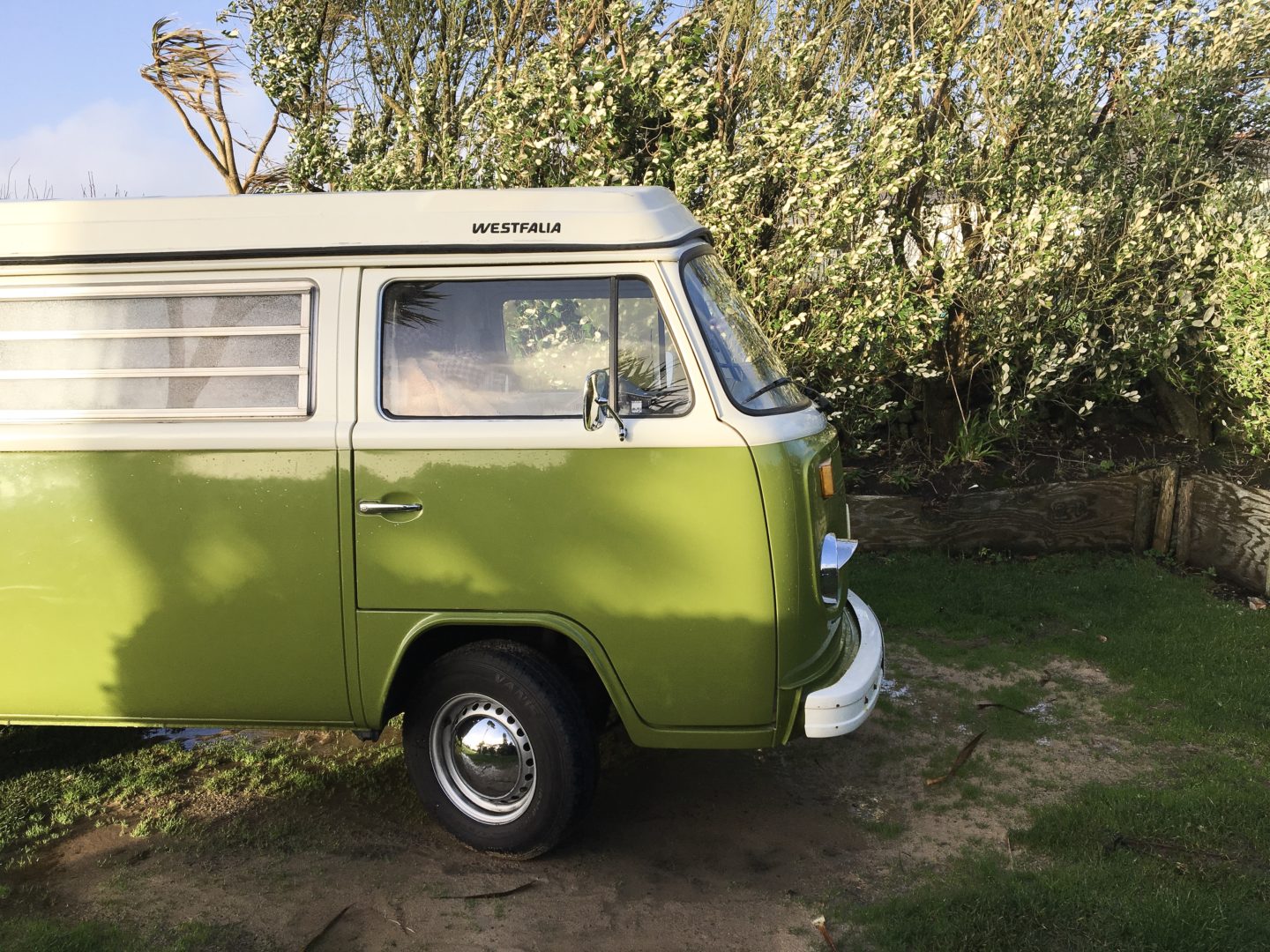 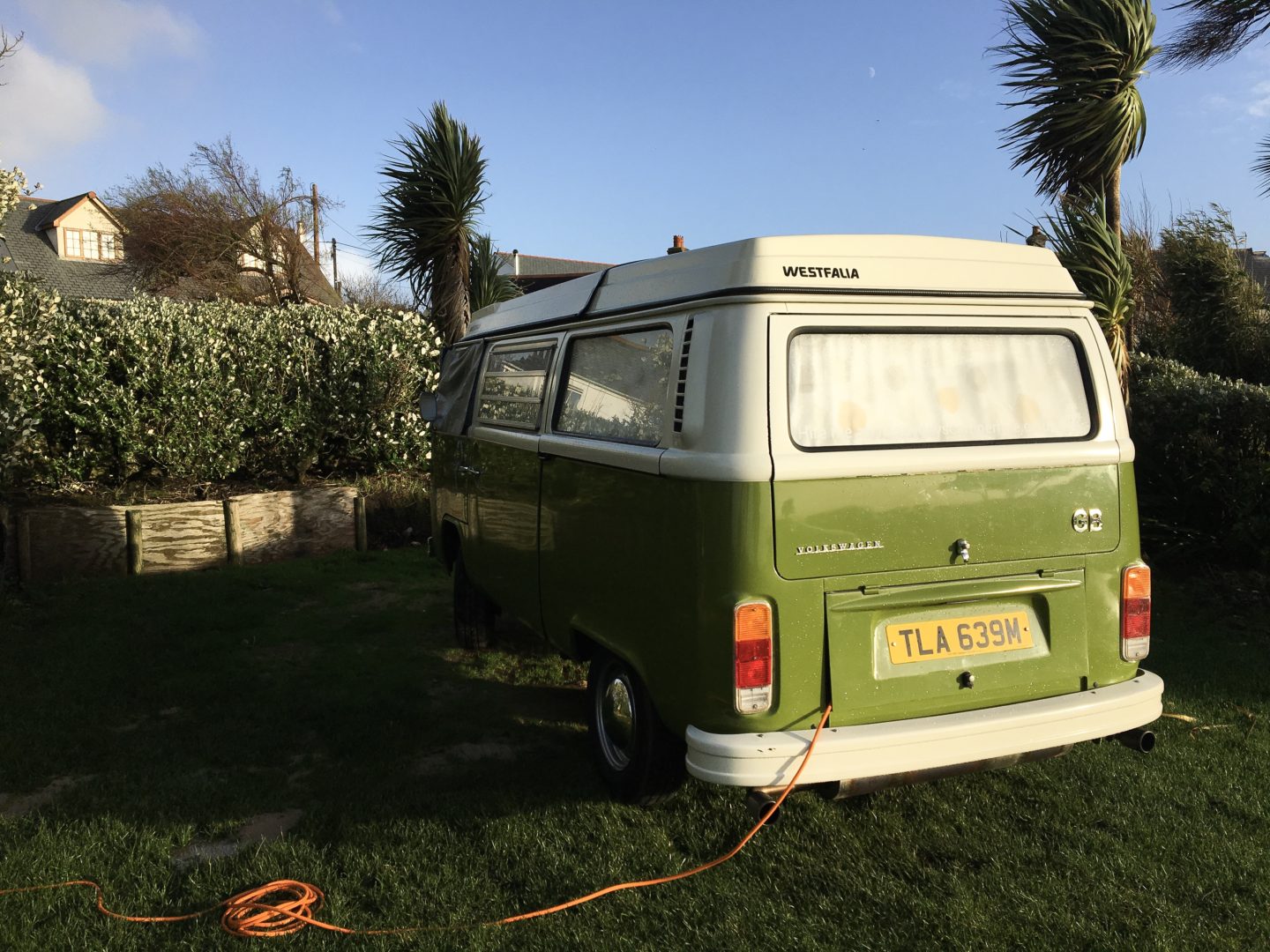 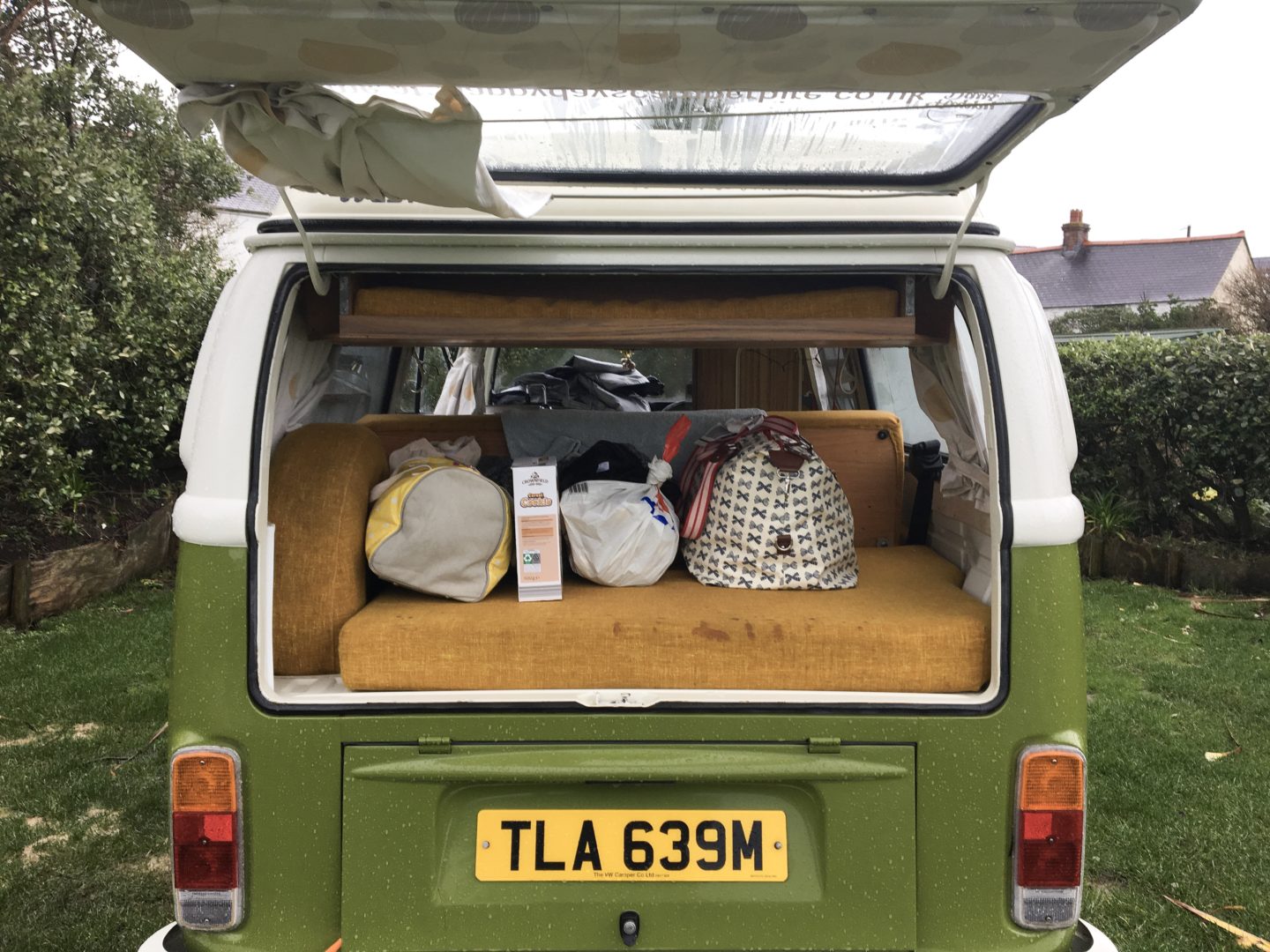 What’s great about a small van like Olive is that in just a few minutes you can be packed up and on the road, exploring the local area. It’s very easy to get around, and Cornwall, obviously, has masses to do and miles of gorgeous coastline to explore. We’ve actually visited Cornwall a lot over the years, and because of this and the weather we decided to go all in for the remote, windswept experience and stay put.

After a long lie-in then, we eased ourself into the day with a spot of miniature stove brunch. Olive is kitted out with all of the basics, including an ice box, gas stove, pots, pans, crockery and cutlery. There was even a cafetiere, tucked away on the tiny shelves under a flip up table, which I was very excited about as Happy Days had also provided an assortment of tea and proper coffee. Belle had a family sized chocolate brioche loaf to keep her happy, so all in all a very pleasant start to the day. 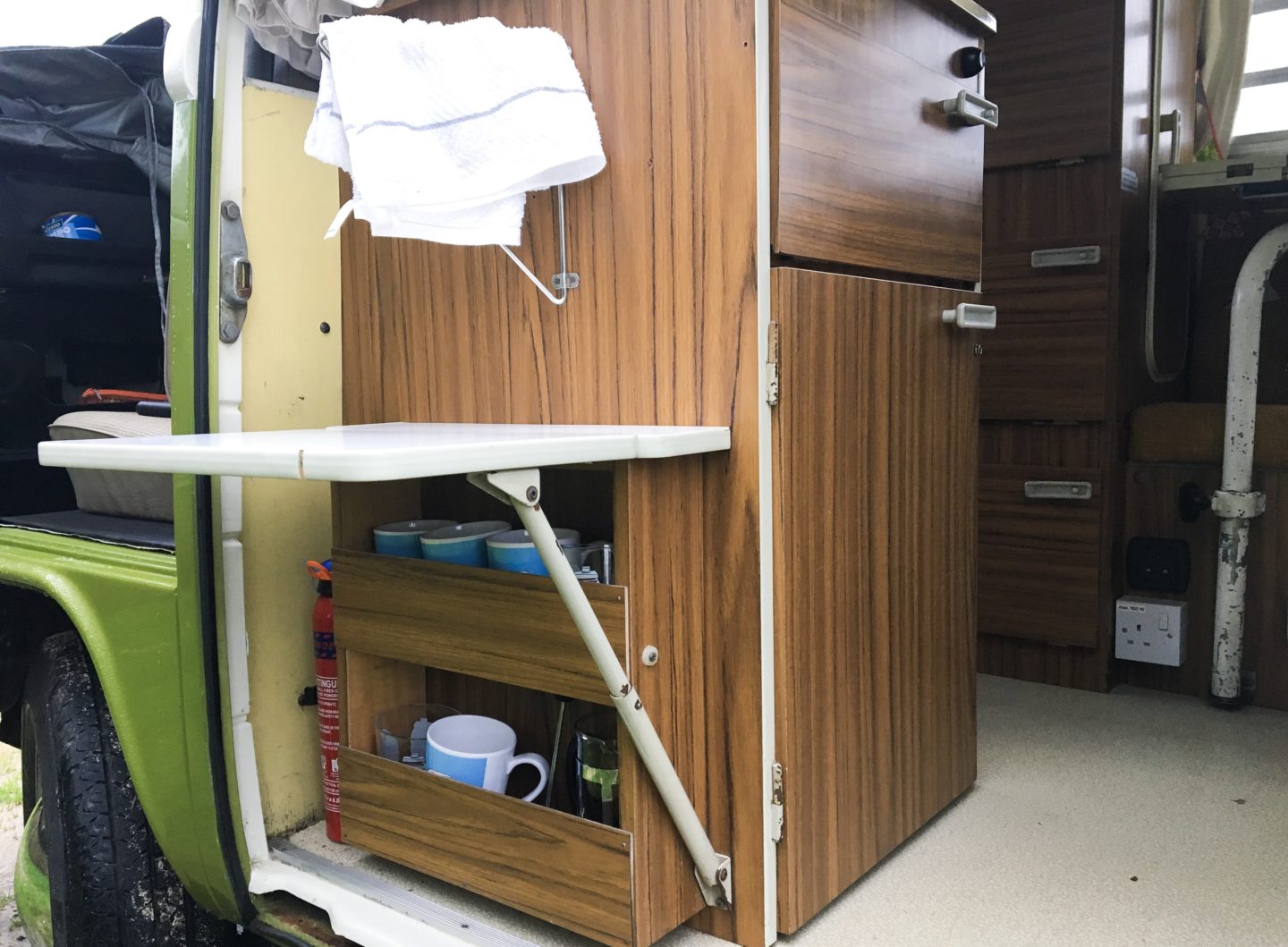 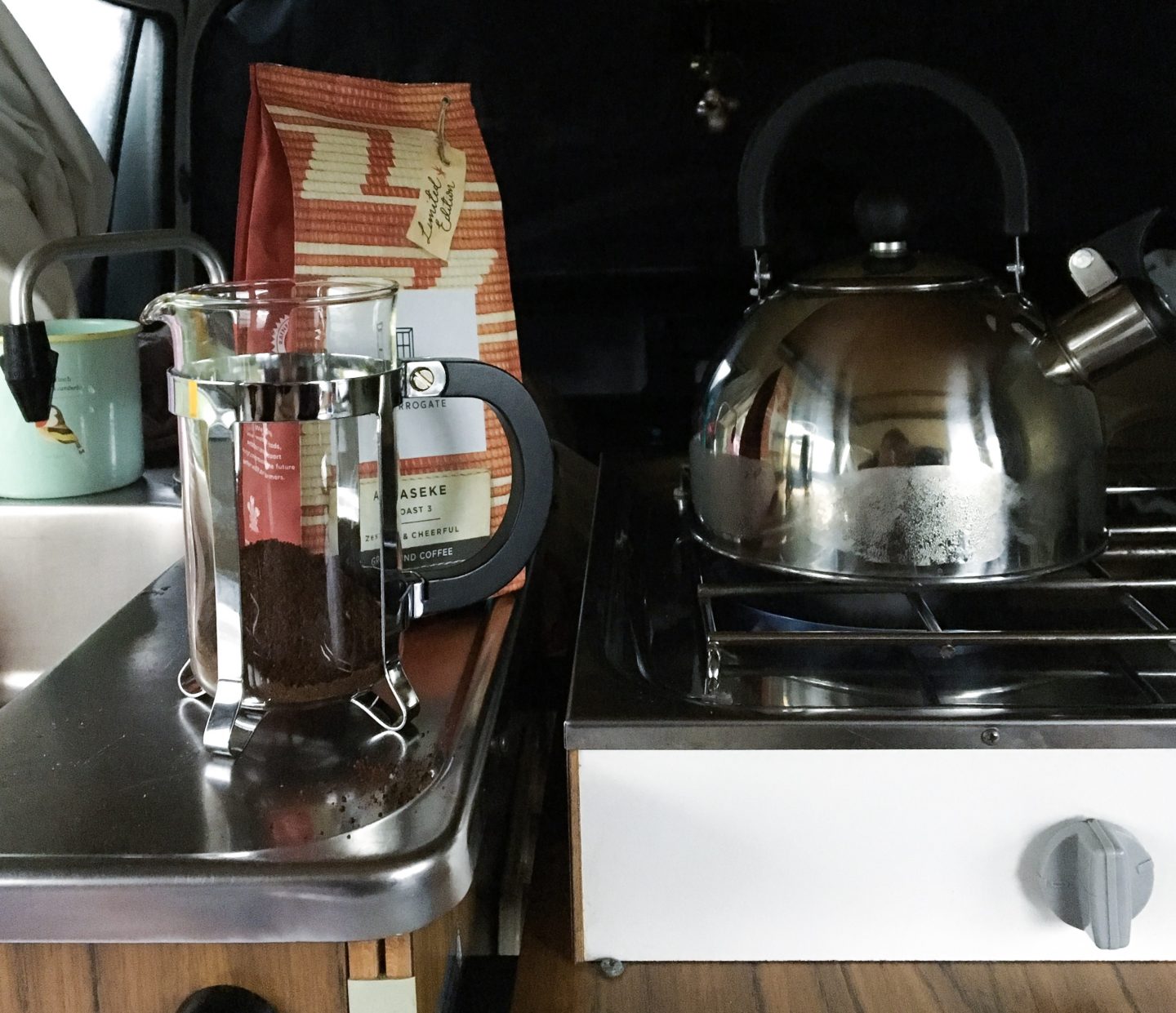 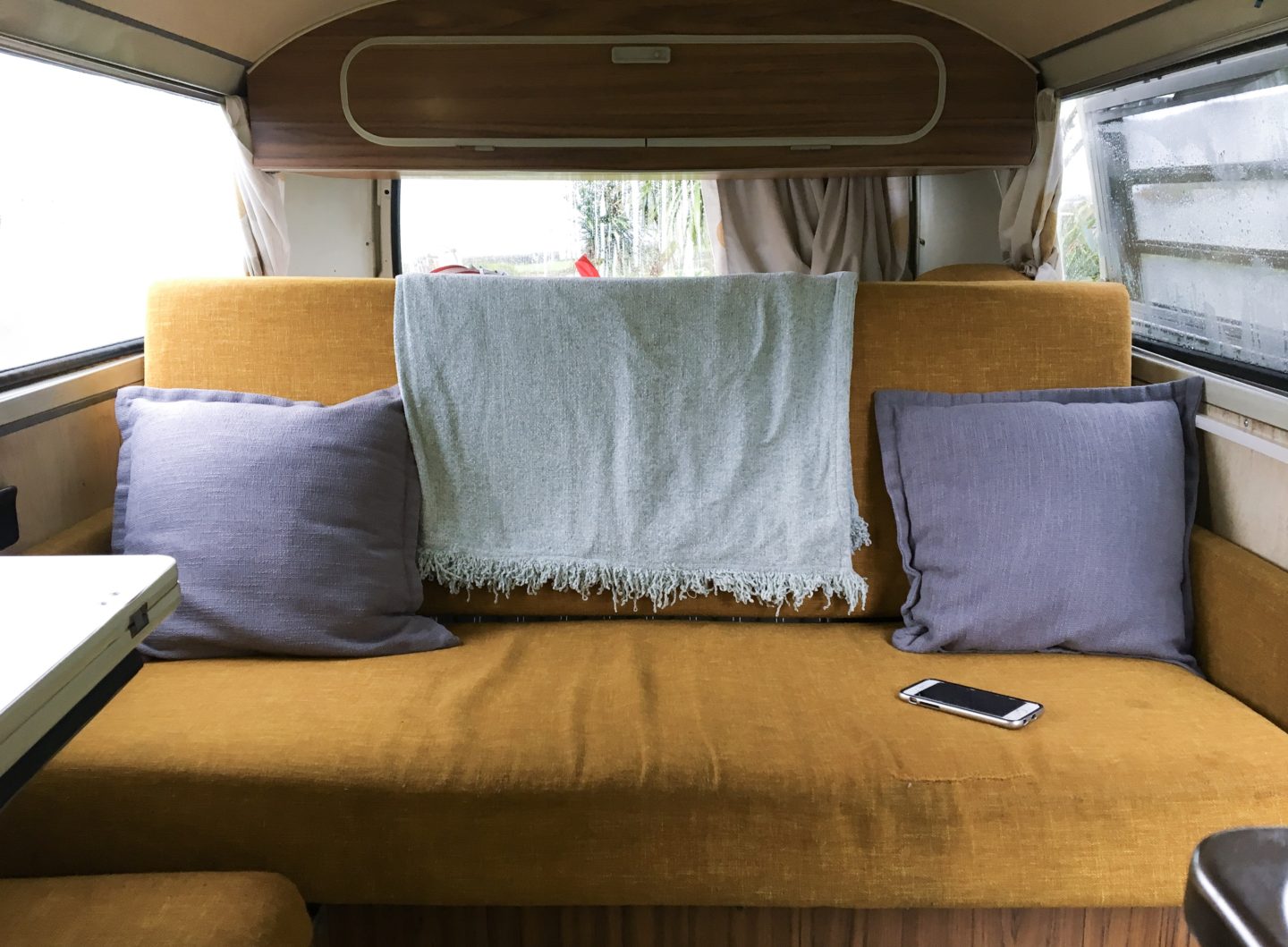 After brunch I ventured out to walk down to Lizard Point. It was only about a 15 minute walk from our campsite, and Lizard Point is Britain’s most southerly point on the mainland, so I didn’t feel I could be that close and not walk down to the cliffs, even though I had to stand a way back from the edge for genuine fear of being blown off. The sea was frantic, the spray that was blown up and into my face like tiny ball bearings.

It was pretty amazing though. It’s hard to be on edge of a cliff, surrounded by water, the wind shoving you from side to side, and NOT feel a little bit taken out of yourself.

After my bracing walk I coaxed Belle out of the van with the promise of exploring the village. Mid-December it turns out is not peak tourist season for small Cornish villages, but we found the pub open – the most southerly pub in the UK no less – and so whiled away the afternoon playing pool and eavesdropping on an old man at the bar telling the young barmaid about a local lad who, although he had his license back, had vowed ‘never to drive again’.

Failing to discover what had happened to lead the young man to come to such a conclusion, we headed back out into the dark and rain, stopping on the way back to the van for fish and chips and cans of bitter shandy. Who could fail to feel smug when the wind is howling outside and you’re cosy inside a van with a big duvet and a battered sausage?

When we’d stuffed ourselves with as many chips as we could muster, I used the gas stove to heat some water to make hot chocolates with marshmallows and we watched a film about a coin heist. (I love a good heist, especially if it involves someone dangling from the ceiling, unbeknownst to the people underneath, which unfortunately this one did not. Never mind.)

After another cosy night, we were ready in the morning to get Olive straightened out and back on the road. Next time I think I might go for a time of the year with slightly more daylight, but in a way the dark and the weather added to the adventure. If you want to escape from real life for a while, (and have time to play some of your favourite slot sites), and take yourself back to a simpler time, then I would definitely recommend a stay in one of the Happy Days vintage VW campers. 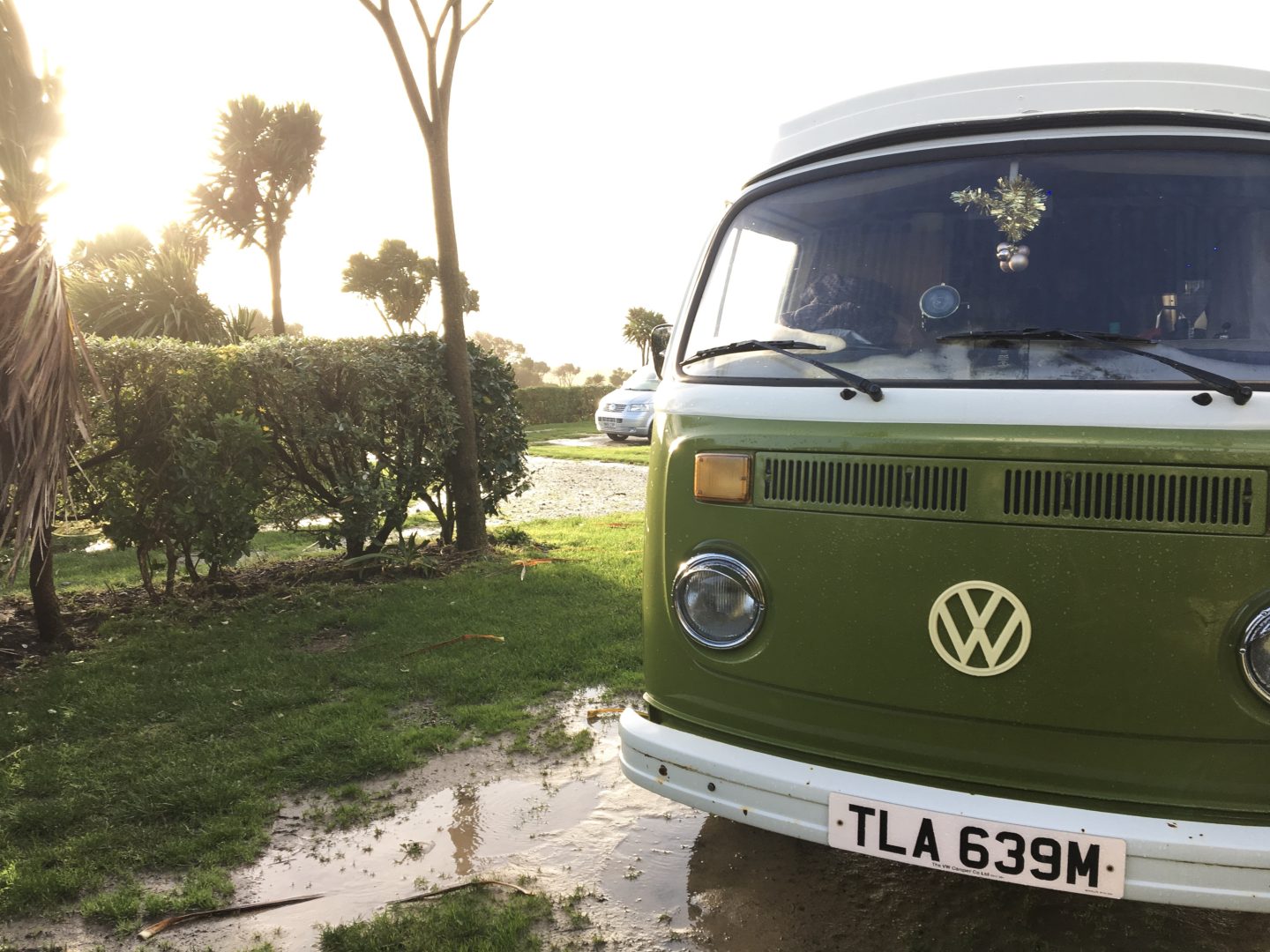 We were loaned Olive for the weekend in exchange for this review. All opinions my own.