In association with Gumtree

Today I want to set you a challenge.

I’m calling it the £147.06 Gumtree challenge, but you’re allowed to change the amount. (I’m nice like that.) My amount is £147.06 because that’s how much it is costing for me and Belle to fly from Bristol to Ireland to stay with my sister over Christmas. We’ve been every year since they moved there and although we have flight costs, petrol and car parking, I easily make it back, eating my way through the Bendicks Mints and assorted savoury nibbles.

Still, it’s a chunk of money, and it’s always nice NOT to have to spend chunks of money if you can help it, so when Gumtree asked if I was up for a money making challenge, it seemed like a good idea to set myself a goal. I love a good goal – the more specific the better, as you will know if you’ve read my new ‘50 things to do before you’re 50‘ list.

We apply the whole SMART goals thing to business a lot – specific, achievable targets with measurable time frames – but it makes a lot of sense in all areas of life really. Take these two examples:

‘Ergh, I could really do with a bit of extra cash, I should probably clear out the garage sometime.’

‘I want to sell enough of the unwanted stuff around my home to cover £147.06 of flight costs before Christmas’

I know which one makes ME want to sort through my garage more.

So where to start? The good news is that if you hoard an average amount of clutter, chances are you easily have £147.06 worth of unwanted stuff lying around the house, in your attic, or out in the garage. According to research carried out by Gumtree, households selling unwanted and unused items have made an average of £378 in the last year, and on average we’re potentially sitting on £881 per household – that’s not bad for a poke around the attic and an hour or so on Gumtree is it?

I was at a slight disadvantage starting the challenge as I’m one of those annoying people who says things like ‘Ooh, clearing out the wardrobe is just so relaxing!’ There is nothing more stressful for me than an untidy cupboard, so I’m already pretty streamlined. Still, in a way this proves the point even better – if I can find things to sell on Gumtree then anyone can.

I’ve actually used Gumtree quite a bit over the last few years. Scrolling back through my account I’ve sold all sorts – a fish tank, a pink ukulele, an air purifier, chests of drawers – I must have made over £400 altogether, which is a promising start to the £147.06 challenge. I’ve always found Gumtree very straightforward and quick to get things listed, especially because I’m of an age when online selling used to involve uploading photos, (slowly), to a PC, and going through a long and complicated listing process. Gumtree really isn’t like that.

Listing something to sell on Gumtree takes literally minutes and if you have a few things to sell then even better, as you can whizz through photos of everything all at once. I use the Gumtree app, which means you can take photos on your phone and add them directly to your product descriptions, write up a little blurb, and you’re good to go. When you take your photos, remember to take them in decent light and make them look as appealing as possible. This isn’t Tinder you know – we don’t need topless photos in dingy bathrooms.

The product description – a bit like a dating profile – is probably the bit that could benefit most from a little bit of thought. The temptation is to just list details about the product but, like any good salesperson, what you actually need to do is create an aspirational idea BEHIND the product, get people thinking about themselves using it. 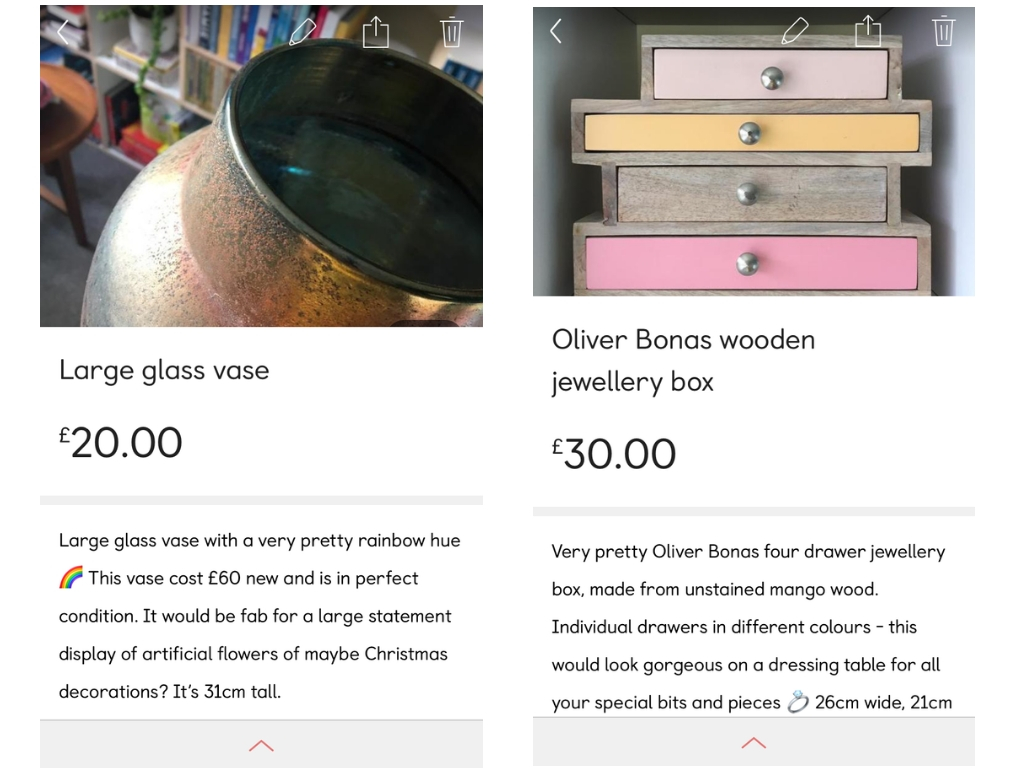 Let’s say you’re selling a laptop. Yes, you could just list the details about the memory and processing speed, but what is it that people WANT from a laptop? What annoys them about their old laptop?

‘Super lightweight laptop, ideal for travelling and perfect for sitting in your favourite cafe getting some work done away from the noise of the office. Fantastic eight hour battery life, so you’ll never have to worry about finding a seat next to a plug again – you can use it out and about and not have to think about recharging.’

Okay, so that’s just a quick example, but you see what I mean. Gumtree has actually put together a downloadable buy and sell guide that goes into this in more detail using the AIDA formula, which talks you through how to write a compelling product title and description. 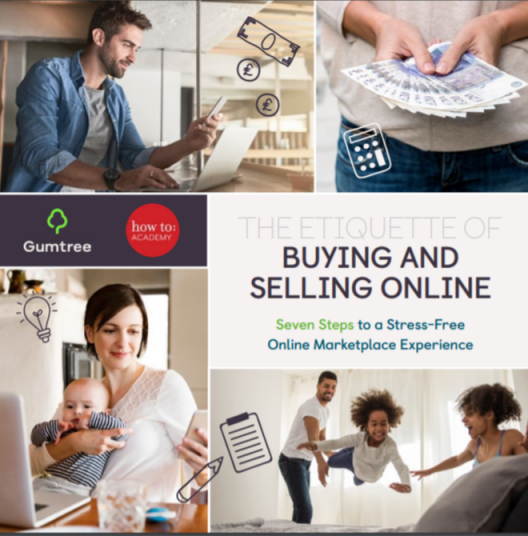 The guide also gives some advice on pricing, which is always a tricky one. I’ve listed things on Gumtree before that I thought were reasonable, only to be met with stony silence, but then listed other things that I thought might be less popular and had dozens of messages in hours. I guess you never really know, so you need to do your research and be flexible.

Sometimes it can take a little longer for things to generate interest, but there are promotion options in case you’re in a hurry and want to get things seen by as many people as possible. (These are just examples – they’re relative to the listing price.) 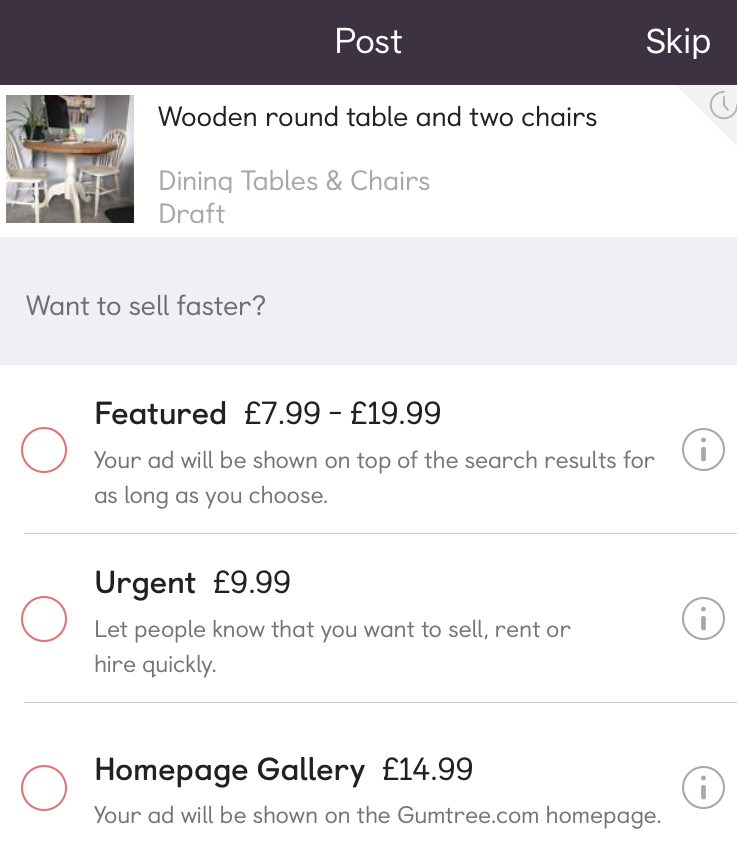 According to the Gumtree research, cars, books, music and DVDs are the top things that Brits buy second-hand, but I wonder if this is true more generally rather than specifically on sites like Gumtree? I definitely buy a lot of second hand books in charity shops, but it might not be something you’d turn to an app for.

DIY and electronics take the number 8 and 9 spots on Gumtree’s top ten and these are the sorts of things that I’ve had most success selling in the past. I tapped into this for the £147.06 challenge and found a couple of bits in the garage that I knew would be popular – some sturdy garage shelving, still packaged, and a four way ladder, bought for a particular purpose and only used once.

I was right about the shelving. I listed it at £70, even though it’s available new for £119, and had about half a dozen messages straight away. There were a few silly offers, but that’s just people trying their luck. You do need to be prepared to negotiate, but when it’s something that’s proving immediately popular you’ll normally find someone happy to pay full price, which is exactly that happened to me. I sold the ladder for £40 too, so I was up to £110 already – a solid start.

Also in the garage I found a shredder that I used to have in my office, and that sold for £10. The selling process was really straightforward for all three items and everyone turned up when they said they were going to. That’s one thing I really like about Gumtree – no faffing about going to the post office or anything like that. (Although you can offer the option to post if you want to.) In the past I’ve normally done cash on collection, but if someone wants you to hold something for them, or you have a lot of interest and want to secure the sale, you can also ask for payment by PayPal – that’s really up to you to negotiate. (More tips about this in the Gumtree guide.)

£120 is my running total, but I’m really pleased with this given how good I am at keeping clutter to a minimum at home. I still have a few weeks to go until Christmas and I still have the vase and mini drawers listed, plus I’ve added the table and chairs in my kitchen. I really like them, but they were a bit of a panic buy when we moved in and don’t really FIT.

I can sort of fit myself there to work, at a push, but then you can’t open the back door, so it’s all a bit of a faff. I need to replace them with something rectangular that fits in the alcove and doesn’t mean my chair is always in the way of the cat flap. 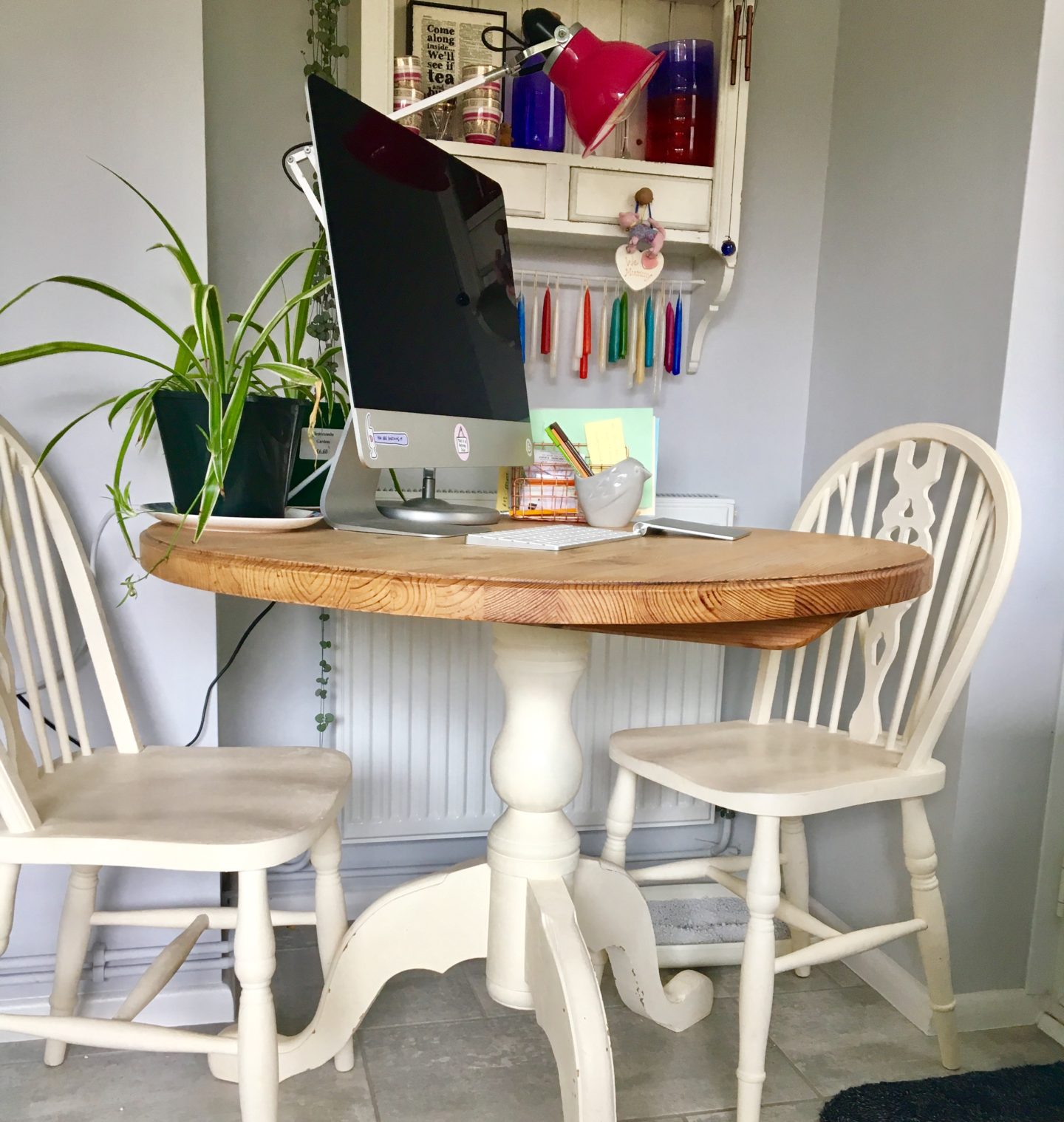 With these few bits still to sell, and my roving, minimalist eye constantly on the lookout for things I can get rid of, I’m confident I can make the extra £27.06 I need to complete my challenge before Christmas. Who knows, if I sell all the remaining items I might even make enough to cover the airport parking too.

So my challenge to you – what do you have around the house that’s ripe for Gumtree and what would you do with the cash?

Why not download the Gumtree etiquette guide to get you started?