Designed to stand out from the crowd, just like you.

That’s what the website says about the SKODA Kodiaq SportLine. I look down – I’m wearing red tights and a dress covered in red, orange and blue flowers. You’d spot me in a busy Tesco, that’s for sure.

The SKODA Kodiaq SportLine isn’t wearing red tights when it’s dropped off at my house on a sunny Monday morning, but it certainly stands out next to the ten year old Renault Clio I normally drive. I think it might be genuinely twice the size. It’s a beast of a car, demanding you look at it in all it’s shiny, four cylinder turbo diesel glory.

It reminds me a bit of one of the cats when they really want my attention, and they sit on my lap and nudge aggressively at my hand with their face until I stroke them. 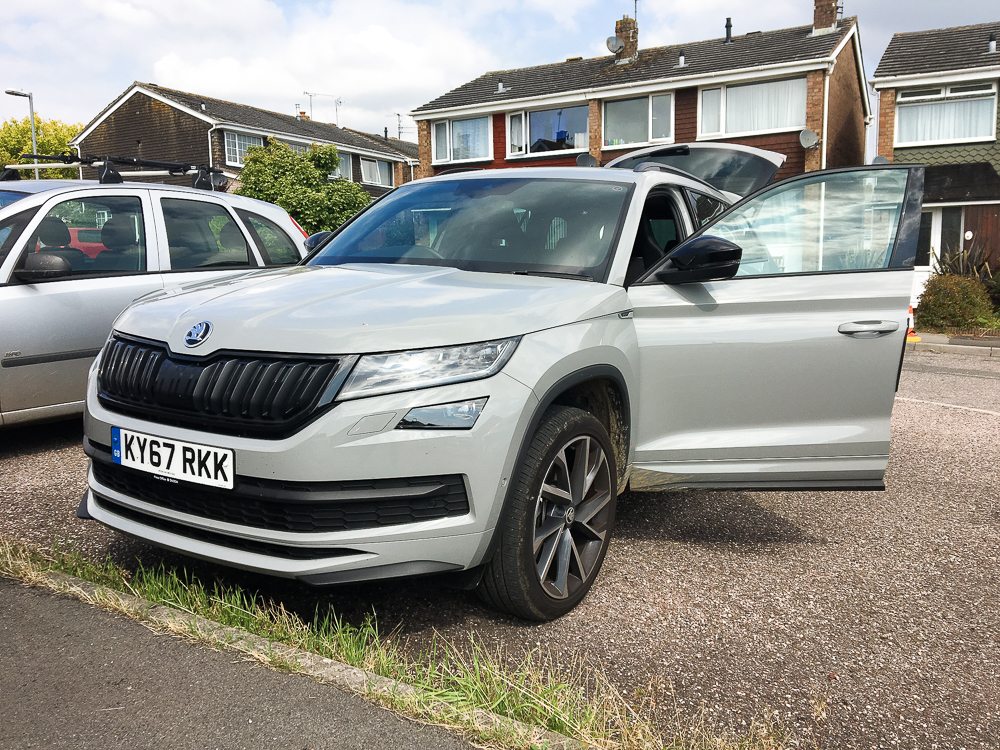 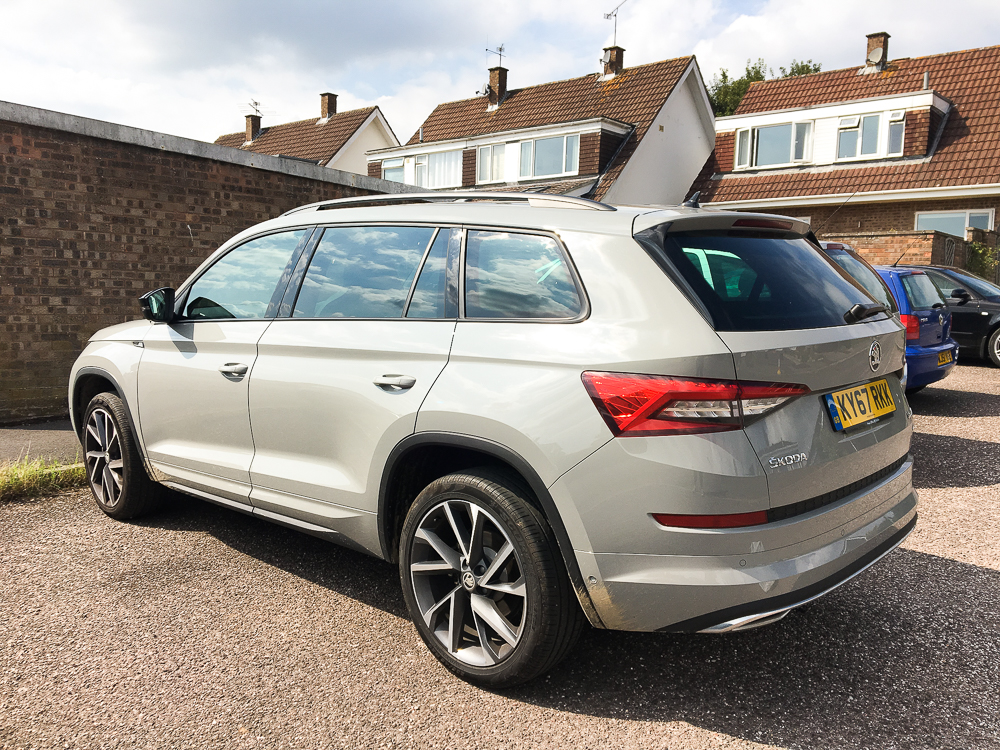 Let’s be honest though, I don’t know much about cars. Not really.

I’ve heard the word ‘torque’, but that’s about as far as my technical knowledge stretches. What I can tell you about though is how sad I was to say goodbye to the SKODA Kodiaq SportLine after our two week loan, and how rubbish it was going back to driving my crappy small car – how heavy the steering felt and how disappointing it was to put your foot on the accelerator and have nothing much happen for half a minute or so.

Because that’s one thing the SKODA Kodiaq SportLine definitely does not lack – acceleration. Whatever you’re doing, put your foot down and the beast is unleashed. I could overtake things ON HILLS. Amazing. It has all the usual bits and bobs that make a new car so easy to drive too, like automatic lights and windscreen wipers, the little light on your wing mirror that points out things in your blind spot, parking sensors – all that jazz.

In fact I’d say of all the new cars we’ve reviewed in the last couple of years, the SKODA Kodiaq SportLine is the one that just seems to KNOW. When you move your finger near the touchscreen it gets excited and ready for action, when the car in front of you pulls away it notices and restarts the engine for you. For the first few days it was almost creepy. I half expected it to pull into a services when it sensed I needed a wee.

There were perhaps a couple of the more modern features that I could manage without. For a start I’ve never been entirely convinced by the stop/start button, other than making you feel a bit like James Bond. Perhaps there is some kind of high tech security reason that I’m not aware of that makes it a good idea, but it just means the car is constantly reminding me to switch the ignition off when I get out, and then I have to lean back in again because I’ve forgotten to take the key with me.

My other issue is with the boot.

Sure, it’s nice to have the boot open and close automatically, but it does it really SLOWLY. I like to be able to chuck things in the boot and then slam it shut before it all falls out, but there is no chance of that with the Kodiaq. By the time the boot has geared itself up to shutting, your yoga mats are well and truly unravelled. 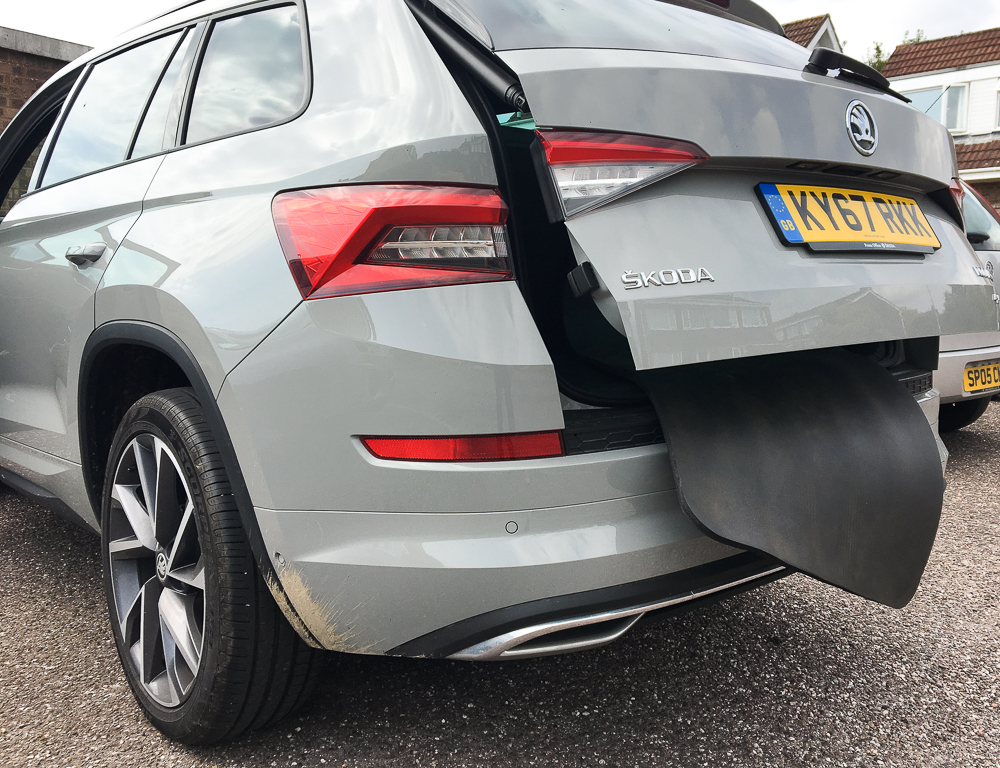 It’s a small thing maybe, but in my opinion a case of technology making things harder than they need to be.

The ‘infotainment’ centre however is a technology that I did miss when I went back to my old car. It contains a lot of information on top of the standard radio and navigation functions, including tips for fuel economy and a green score. It also has CarPlay, so you can plug your phone in and do things like access your Spotify playlists and have WhatsApp messages read aloud to you. 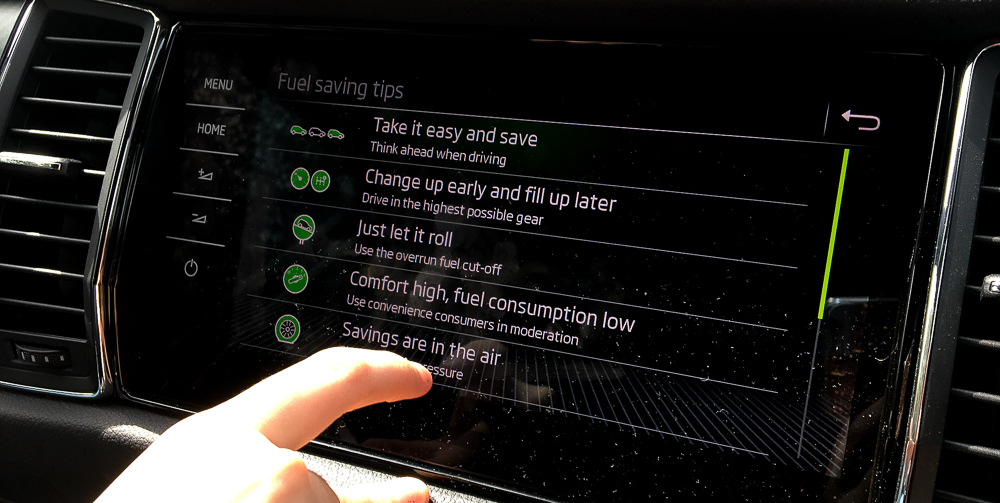 The SKODA Kodiaq Sportline is a seven seater, but not one of these seven seaters that scrunches a couple of dwarfs into the back – the back two seats are proper seats, that grown up people could sit in comfortably. If you’re not using them though, the front row of passenger seats are adujstable, so you can slide them back to maximise leg room. 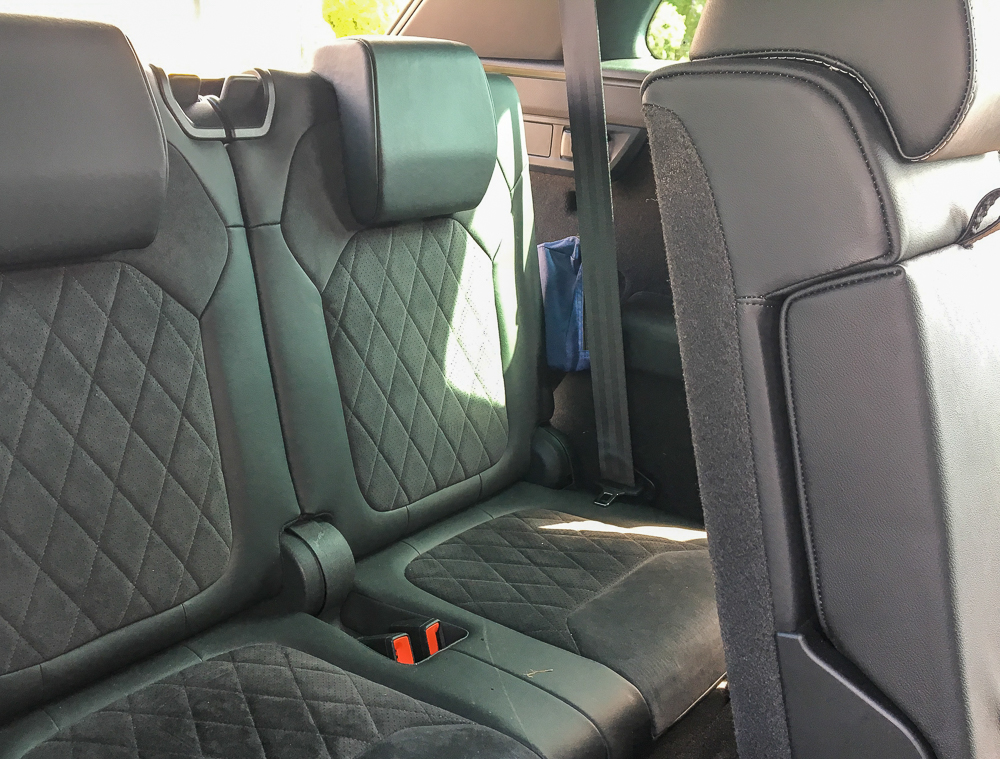 Having the extra seats means you have to compromise a little bit on boot space, but you can flip the seats down in seconds if you want to, creating an extra large boot. Fiddly back seats are a pet hate of mine, but these lie completely flat with just one simple movement and can be pulled back into place through the boot with an easy to reach handle. 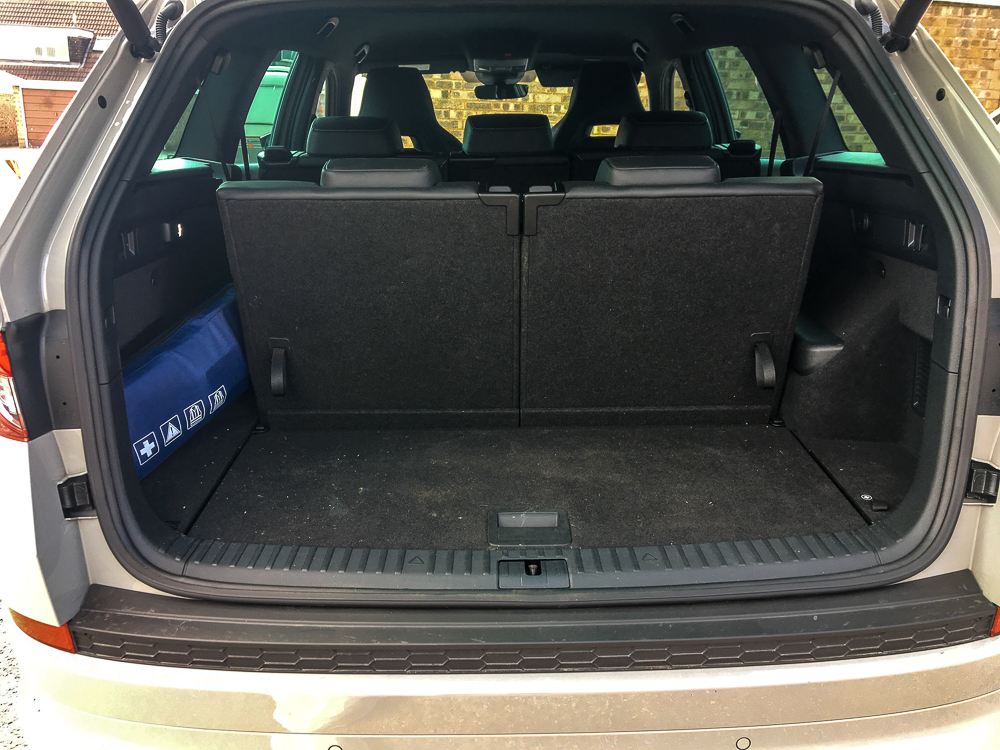 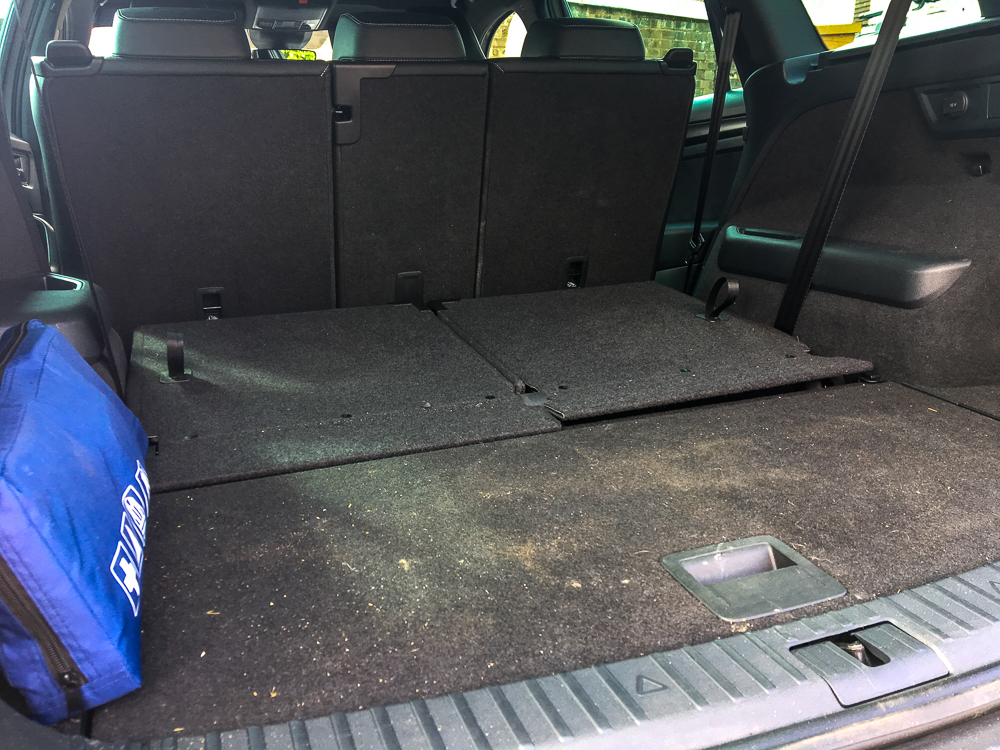 What’s also very cool is that although it can carry a lot of people, it doesn’t feel like a people carrier – it maintains a sporty, grown-up look, rather than immediately making you imagine hoards of messy children spilling out from it. In fact, it took me about four days to even notice that it HAD an extra row of seats. It’s pretty impressive that it can be that spacious and yet so subtle about it.

The SKODA Kodiaq won the What Car? award for ‘best large SUV’ and they said that ‘what makes the Kodiaq our winner are the neat touches that go that extra mile.’

I’m a sucker for those little extras and the SKODA Kodiaq SportLine is full of them. There are hooks and cubby holes galore, an extra compartment in the dashboard for your passenger, and fabulously spacious door pockets. They’re perfectly shaped to hold a bottle of wine when you’re on your way to a casual dinner party, and still leave room for an assortment of other essentials. Honestly, it’s such a good fit, you’d think it was made for it. (Note this is the passenger door – don’t drink and drive kids.) 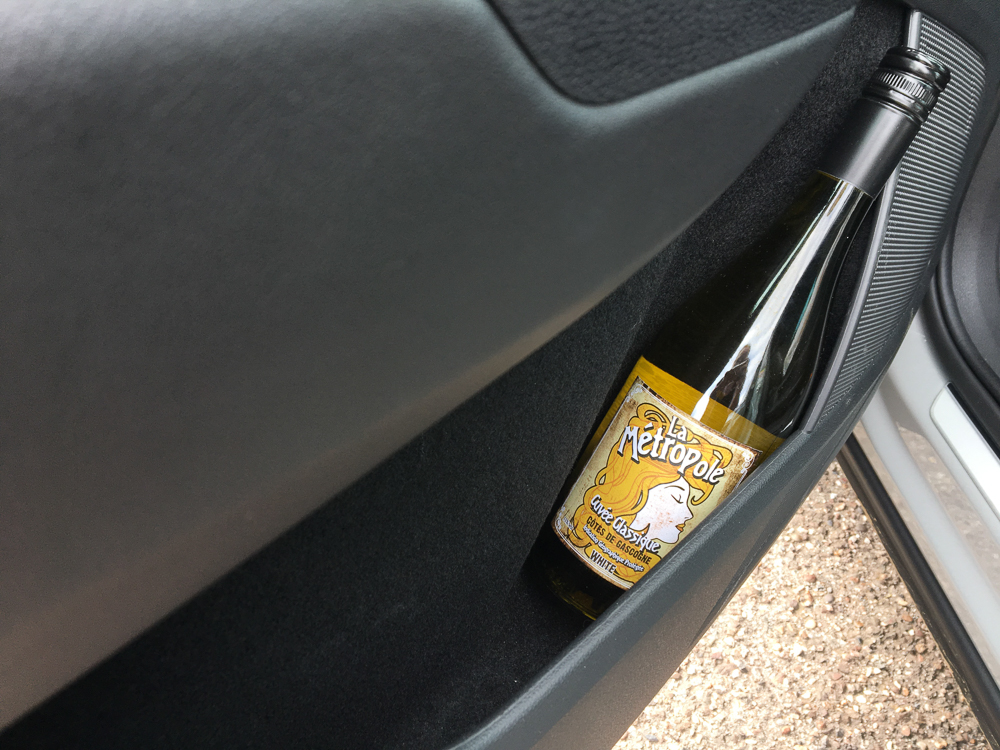 One of my favourite features is that both the driver and the passenger doors have secret compartments fitted with slide out umbrellas. I am one of these people who looks out of the window when they wake up, sees the sunshine, and wears flip flops. An emergency umbrella is never going to be wasted on me. 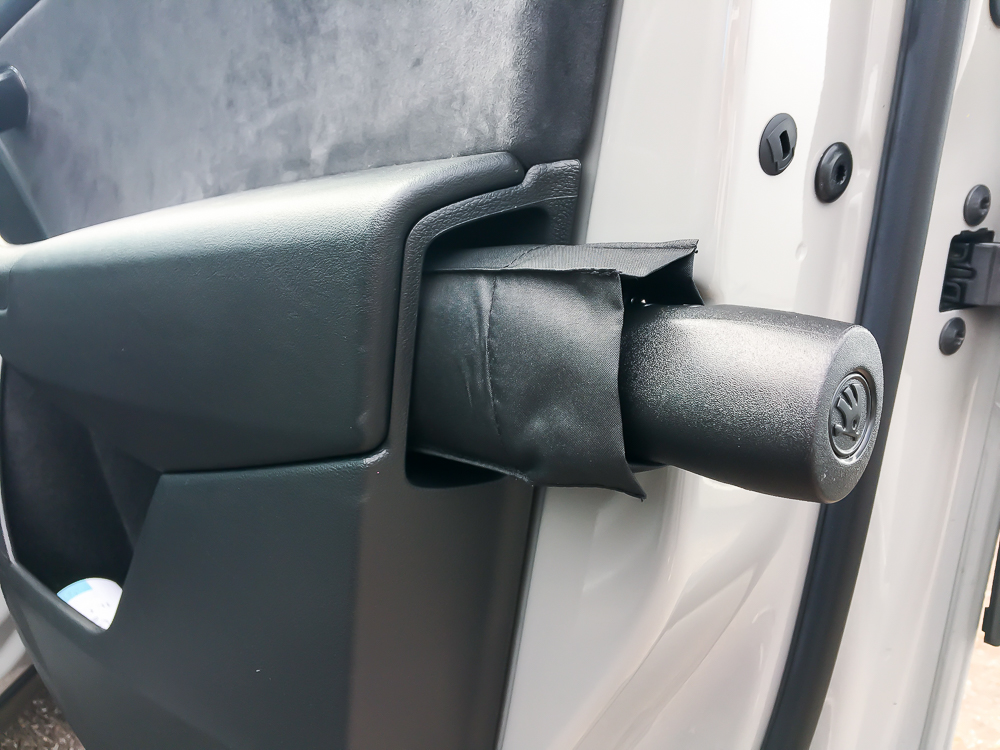 Even better though, should you want to keep say just one umbrella in the car, and another in your handbag, you can utilise the space as a biscuit storage area. I found the space accommodated both Tesco malted milks and Choc Leibniz well, although I can also see a packet of party rings fitting nicely.

Top marks to the SKODA Kodiaq SportLine here for versatility. 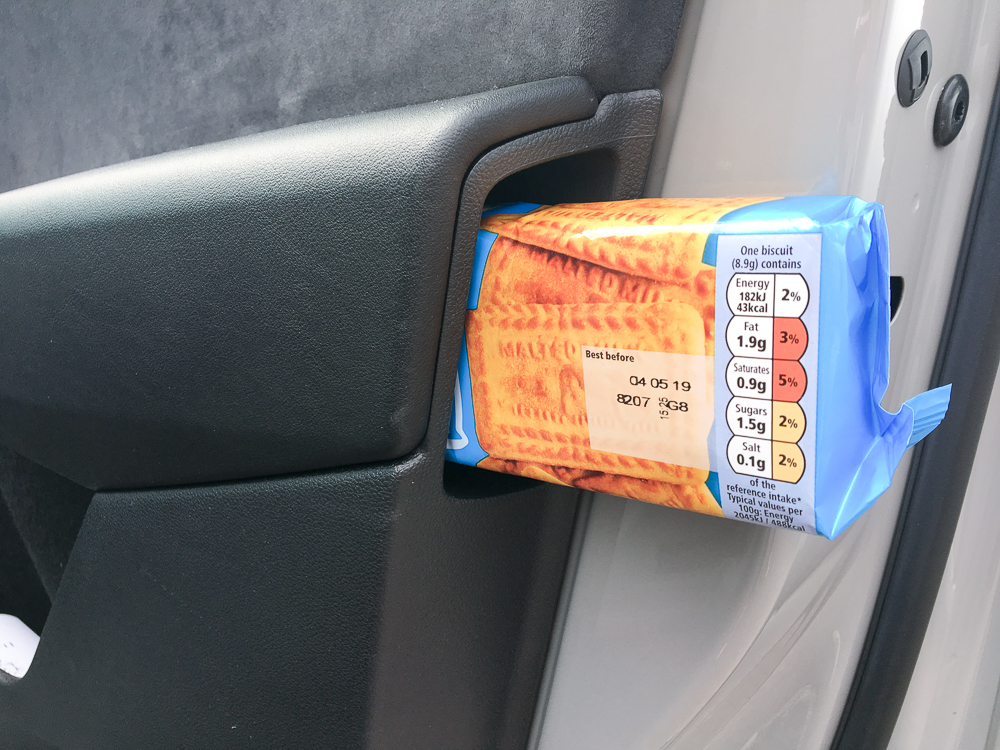 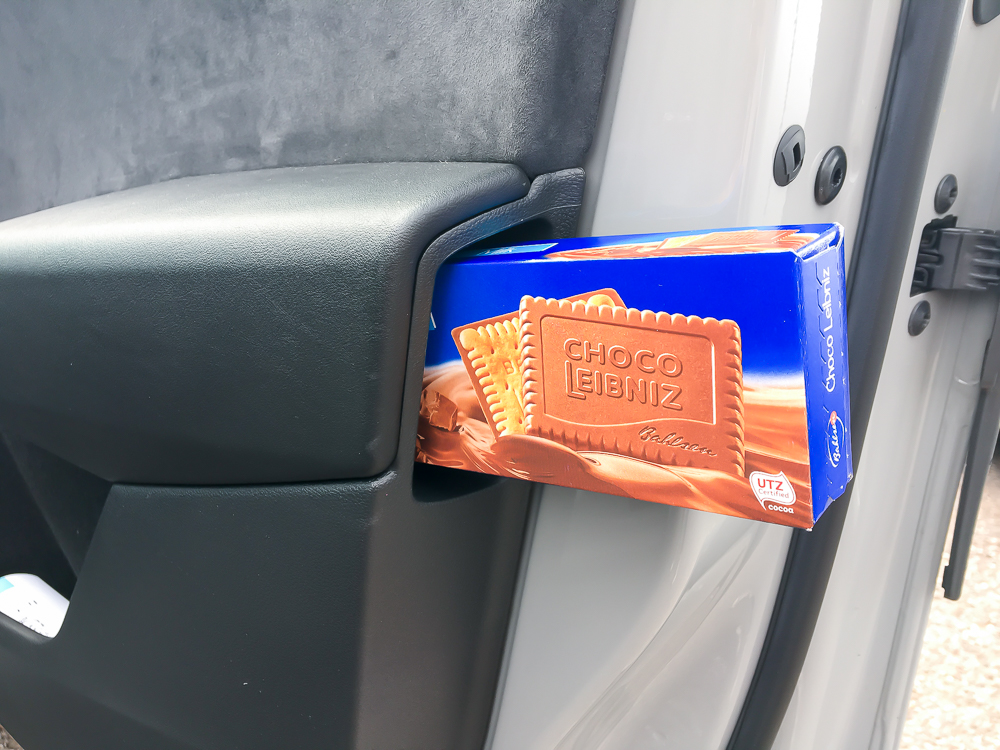 Overall then, we loved the SKODA Kodiaq SportLine for its marriage of luxury, performance and practicality. It’s exactly the sort of car you’d want if you have a big family and a couple of dogs but are secretly clinging to the idea of yourself as a sporty singleton and want Alcantara bucket seats and multifunctional sports steering.

I feel like it’s a car that could neatly avert a mid-life crisis.

My very best bit though is that every time I switched off the engine, it said ‘Goodbye Graeme L.’ I’m assuming this was programmed for the previous user and isn’t just that the Kodiaq thinks I look like a Graeme.

Find out more about the SKODA Kodiaq SportLine.

We had the SKODA Kodiaq SportLine on loan for two weeks for the purposes of this review. All opinions my own.