This was a review trip. All opinions my own.

You know I love a mini break.

They’re slightly more complicated now we have the kitties, as I have to arrange for someone to be in charge of meaty chunks, (theirs), and then deal with the separation anxiety, (mine), but I have about 1,329 pictures of them on my phone, so I do my best to be brave.

I was really looking forward to our weekend at Oakdown in Devon though, as knew it was a couple of weeks into GCSE exams and that I was definitely going to need to lie in a deckchair drinking cider out of a camping mug for a while. And yes, Belle is stressed too, but this is MY blog, so I get to complain about ME. 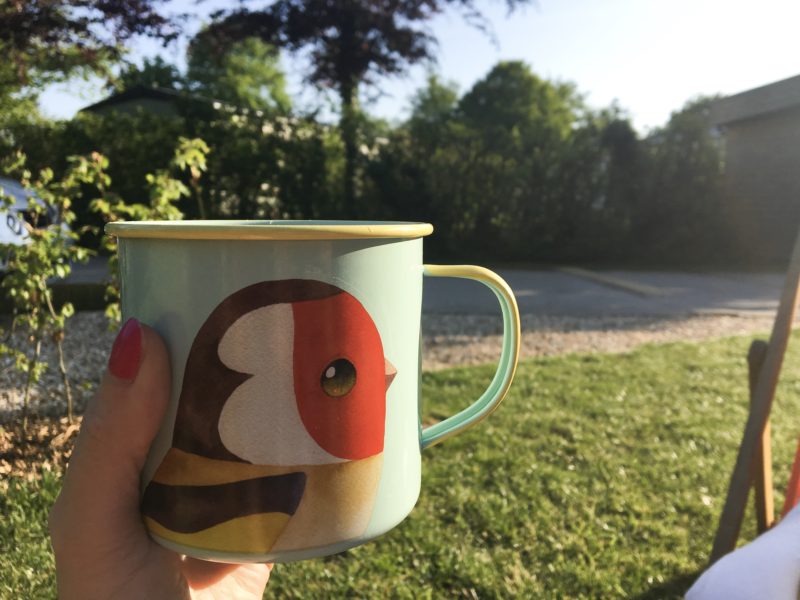 One of the things I’ve found about parenting is that there is a definite trade off as they grow up between responsibility and control. When they are small you long for the days when they are able to take themselves to the toilet and you’re not required to watch a dance every ten minutes, because you imagine that this passing on of responsibility will take the pressure off you.

Instead it is replaced with something else. When they are teenagers they still have endless needs and wants, it’s just that now you no longer have any real control over them. You can SEE it, but you can’t do anything about it. You hover on the edges of their lifes, offering snacks and making suggestions, but you can’t make them happy. You cant make them do anything at all.

You also find that you STILL have to do things like make sure they eat and drink properly, because apparently it is easy to forget when you’ve got important video edits to watch.

But it’s okay, because I had the mini break.

Oakdown has won dozens of awards over the years for its camping and caravans and you can see why. The site is beautifully kept, with great facilities and extremely friendly and welcoming staff. There are play areas, nice clean toilets and showers, and a just across the lane is the site shop and cafe.

We weren’t camping or caravanning at Oakdown though, we were trying out their new glamping facilities. They have three types of glamping accommodation – shepherds huts, camping pods (which look a bit like upside down boats) and premier pods. We stayed in a premier pod. (The third picture.) 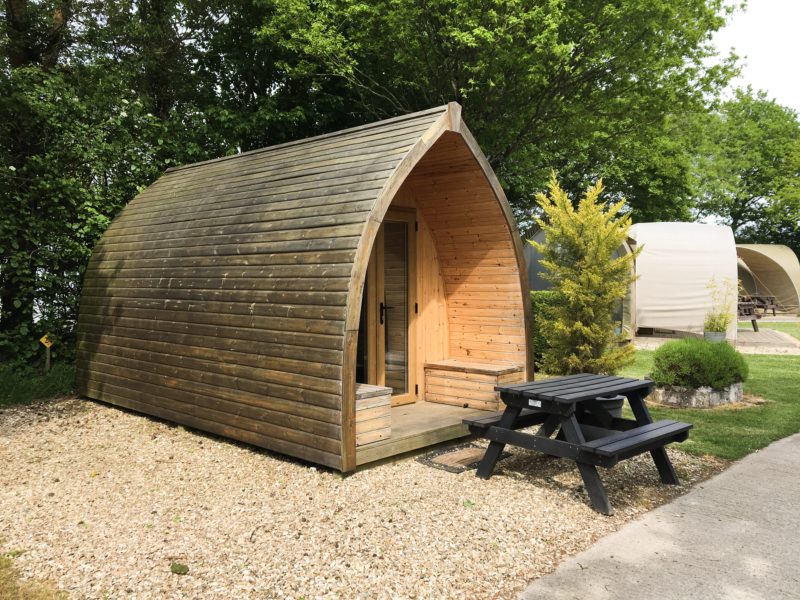 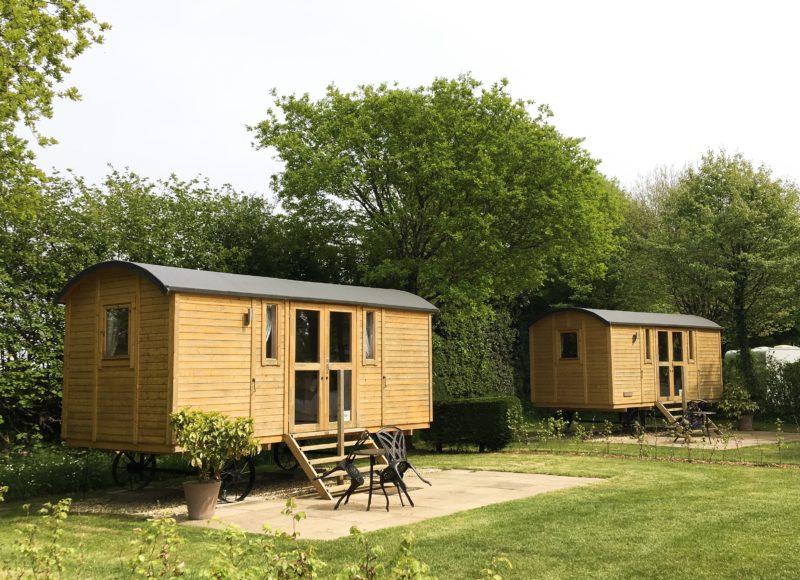 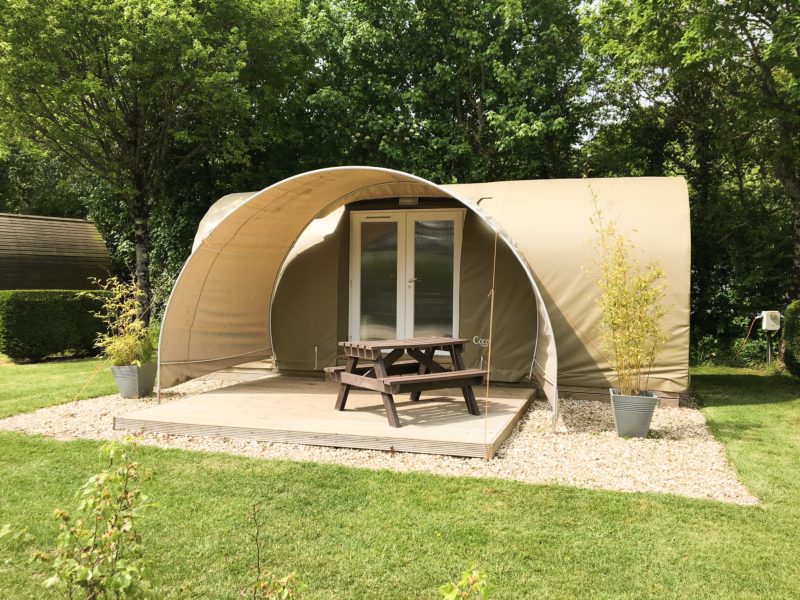 I’ve done a lot of glamping in my time, some of which has basically been like staying in a hotel. I’m not entirely sure that the ‘amping’ part really counts if you get hair straighteners and a coffee machine.

The glamping at Oakdown was a bit more old school though, which I liked. You don’t have to pitch a tent or sleep on the floor, you’ve got a couple of plug sockets and a kettle and microwave if you want to be a baby about it (me) but apart from that you’re camping. There’s no Moroccan style earthenware crockery provided, no antique tea chests stacked with tealights and lanterns and vintage butter knives – just good old fashioned ‘bring your own sleeping bags and tin plates and don’t forget the bottle opener’ kind of camping.

The central section of the premier pod has your kitchen area, including a pull out table and four stools. On each side of this is another little room – one has a double bed and one has two single benches which you can sit on during the day and turn into beds at night. 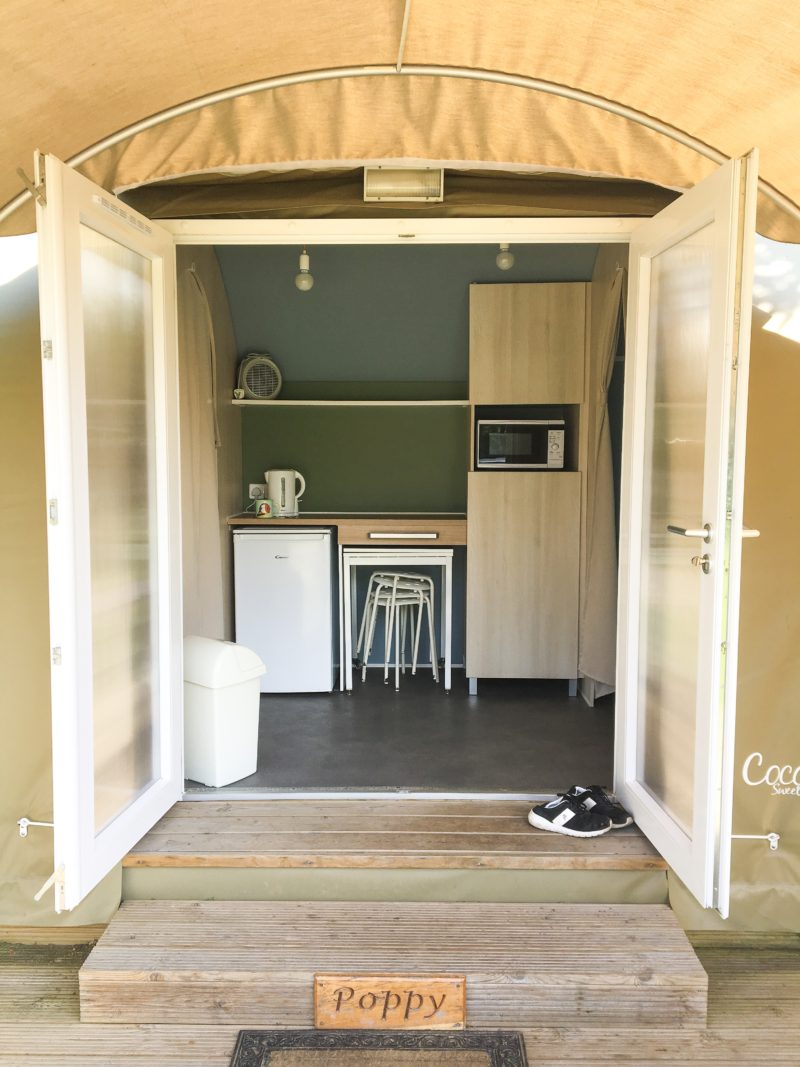 There’s an outside picnic table too, and four deckchairs. (I set up my own personal camp on two of these with a pillow under my feet on one of them and the royal wedding on my phone.) The glamping area also has its own mini toilet block, with a sink and drinking water taps outside too.

I have to admit that having become used to the fancier end of the glamping scale the ‘back to basics’ approach did catch me off guard a little bit. Despite Oakdown being very clear on their website about what is provided, I probably packed a little on the sparse side. (I.e. no cooking or eating equipment.)

It was fine though, as I had bought my camping mug, just because I like to drink outside in it for fun, and I do carry a plastic spoon and fork in my handbag so that I don’t have to get new ones when I’m eating train station food. Also the coat hooks in the pod work well as a bottle opener.

Plus there was the cafe. 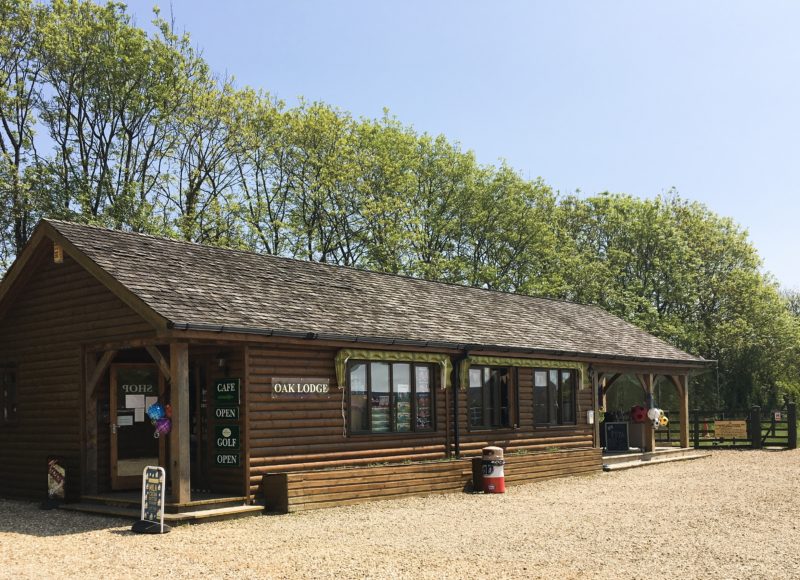 You expect the food to be a little ordinary sometimes in cafes like this, but the Oak Mead cafe is excellent and gets five stars on Trip Advisor. We had cooked breakfasts with slices of toast about an inch thick, spread with real butter. 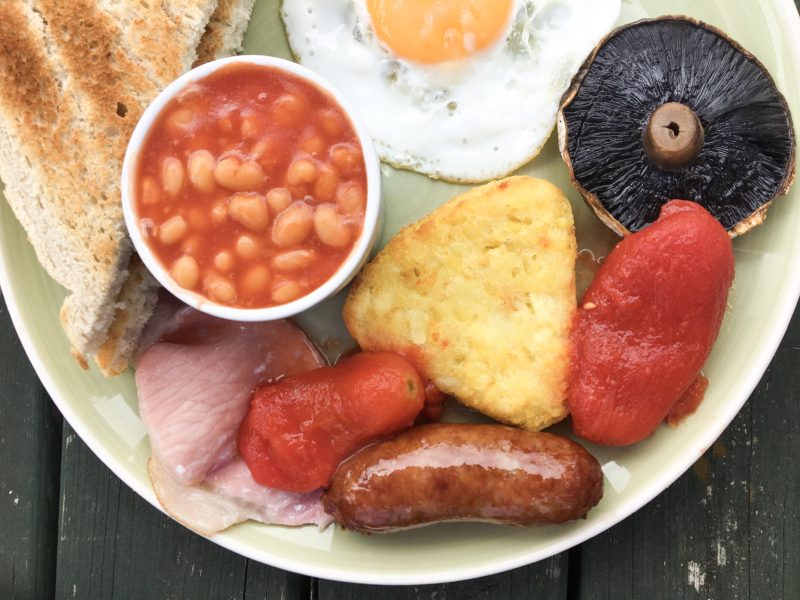 They do breakfast every day until midday so it’s a good job we weren’t staying a week or I would have put on about four pounds. And that’s without even taking the homemade gelato into account.

The gelato was something pretty special – soft and creamy and in an amazing selection of flavours. It was pretty hard to choose but in the end I went for Parma violet because I have never seen violet flavoured gelato anywhere before and I like to life live on the edge.

This was ONE SCOOP my friends. ONE SCOOP. 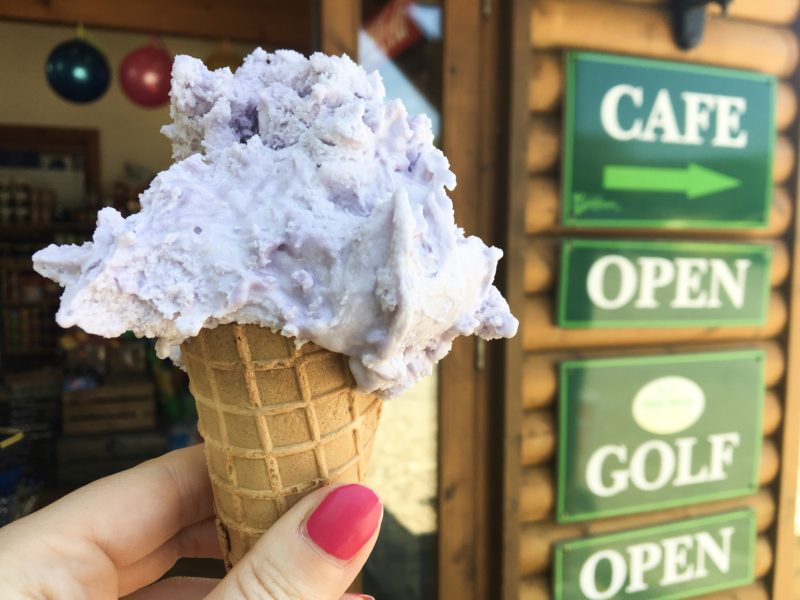 They also make their own pizza, and you don’t need to be staying at the holiday park to visit, so definitely one to keep in mind if you find yourself nearby.

We don’t actually live that far away from Oakdown, so we have explored the area quite a bit already, but if you haven’t then you are spoilt for choice really. Sidmouth is very close and is a lovely little seaside town, and Lyme Regis is definitely worth a visit if you’ve not been before. There are smaller places along the coast too, like Beer and Branscombe. Fun fact: Branscombe is believed to be the longest village in the UK!

If you’re a donkey fan, the Donkey Sanctuary is just a short walk across the fields and gives me the perfect excuse to put in one of my favourite ever pictures of Belle, where she looks to me like she is presenting a donkey documentary. 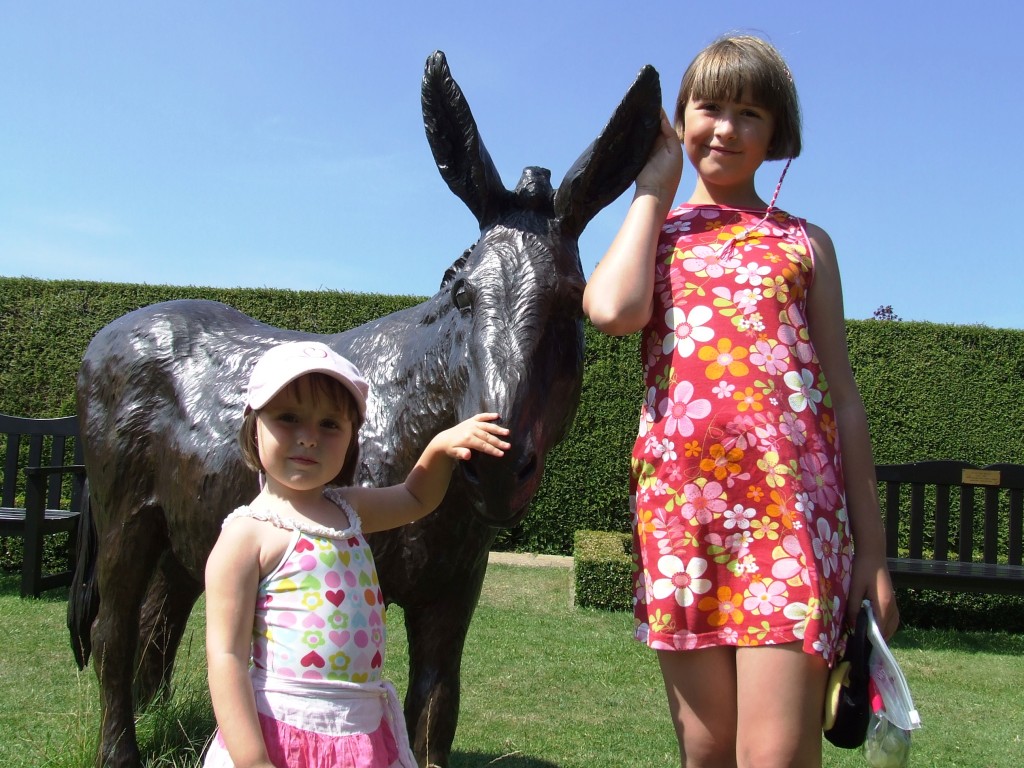 So there you have it. Thank you to Oakdown for inviting us to come and stay for two nights to try their premier pods. It was a very much needed break and the Devon and Dorset coast is always worthy of a visit.

Find out more about Oakdown camping and caravan site here.