When couples experience difficulty in getting pregnant later on in life, it can be extremely disheartening. If you’ve shared this struggle too, you’re not alone. In fact, the chances of a woman falling pregnant begins to decline from the age of 35. When it comes to sperm, men over the age of 50 produce around 55% less sperm every day than the average male.

In addition to fertility problems which come with age, the risk of complications in pregnancy and miscarriages also increase. However, that’s not to say that women who give birth in their 40s aren’t able to carry a healthy baby to full term.

In this article, we’ve explained how age and fertility issues are related, and which treatments can help you overcome them.

Chances of conception decrease with age

Naturally, the chances of conceiving without support decline with age, due to biological changes which take place in your body. At around age 35, there is a significant decrease in the number of healthy eggs, which will result in irregular ovulation.

As shown by the graph below, women experience their best fertility age during their early 20s. A study conducted at Duke University found that a woman in her late 30s has around a 20% chance of conceiving naturally per cycle. As we get older, the chances of facing fertility problems increase. 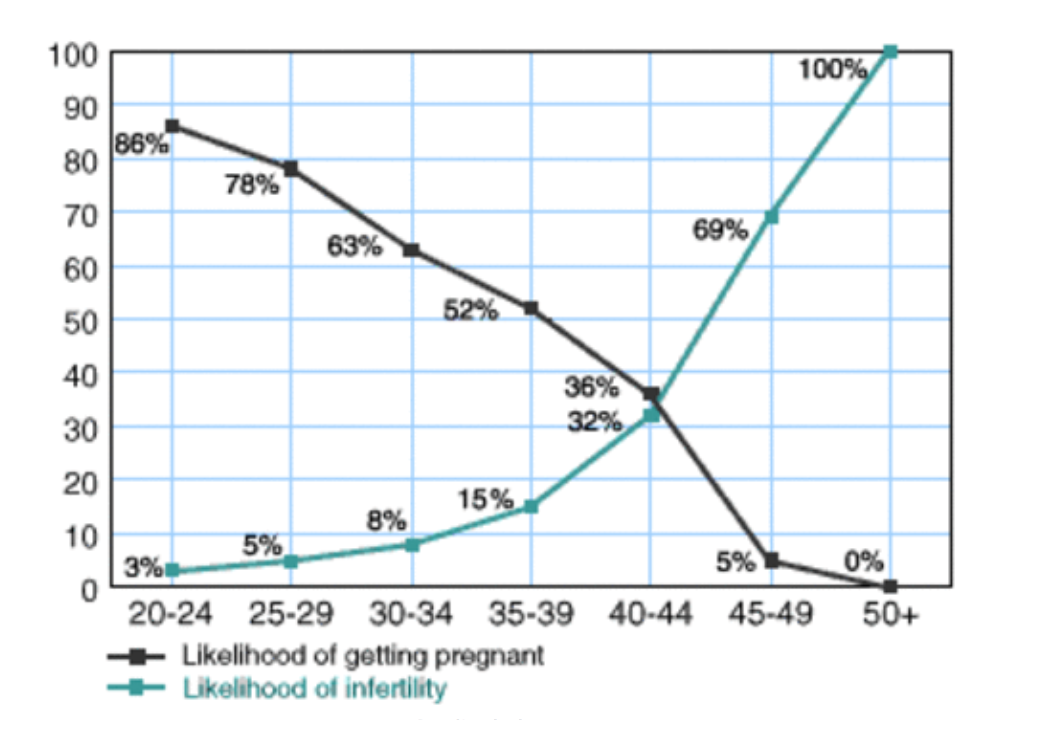 Conceiving later in life carries complication not just for your baby, but also for the mother. For example, the risk of preeclampsia over the age of 40 increases from 3% to 10%.

Research also shows that due to fertility issues, around a third of pregnancies in women over 40, end in miscarriages, and due to hormonal changes, pregnancies this late in life are more likely to be multiple, putting additional stress on your body.

The egg is a crucial part of conception, but as you get older, their quality declines. A common misconception is that fertility depends on the number of eggs produced, but it’s also important to consider the quality of eggs produced.

After reaching 40, there’s a greater risk of your new born having genetic disorders such as Down’s Syndrome, because your eggs are more likely to have chromosomal problems.

The average female is born with around one to two million eggs at birth. Contrary to popular belief, you only get the eggs that you’re born with. Unlike men, who continually make sperm in their reproductive organs, women have a finite supply which dwindles over time.

If you have a low egg count, it’s safe to assume that your chances of running into fertility issues are more likely.

But despite all of the above points, women over the optimal fertility age of 25 shouldn’t dismiss the idea of starting a family. In fact, there are fertility treatments available to support conception.

If you’re a woman in your 20s, concerned about fertility problems but not ready to start a family, then freezing your eggs is a viable option. This relatively new technique allows mature eggs to be stored for a long time at very low temperatures.

They can be stowed for up to 10 years, and then used as part of a specialised form of IVF called Intracytoplasmic Sperm Injection, or ICSI. This involves injecting the egg with a single sperm and leaving it to fertilise before inserting the successful embryo into the womb.

The current chances of having a live birth using frozen eggs, fertilised with ICSI, depends on the age at which the eggs have been frozen.

There has been no research to show any link between using a frozen egg for treatment, and any birth defect of chromosomal abnormalities.

Another treatment which can help you overcome any fertility problems is egg donation. Using eggs from a donor who has been fully screened and is at the optimal fertility age means you can be certain that your chances of conceiving are good.

If you’re concerned about your chances of conceiving or want to know more about things like low egg counts or the chances of hormonal changes, it’s always best to consult your doctor for any advice.