It’s a common misconception in my family that I have absolutely zero sentimentality.

If you ask my mum, I would throw away a precious family heirloom soon as look at it, and while she’s right that I’m not a hoarder and don’t keep old stuff just for the sake of it I DO keep things that I think are worth keeping.

I mean sure, I’ve had my fair share of having to deal with children pulling paintings out of the recycling and asking ‘how did THIS get here?’ whilst looking sad, but every parent has that don’t they? Not every single thing your child ever touches is worth keeping. But some are, and so I do.

For years I kept all of our special family bits and pieces in a battered old suitcase – one of those old ones that you imagine Laura Jesson in Brief Encounter would have used to run away with Alec Harvey, had he ever been interested in more than just sleeping with her.*

When that became too small – (you see Mother how I amass these treasures?) – I upgraded to a very sturdy plastic box with a clickable lid. Practical maybe, but it doesn’t exactly say ‘precious memories’. Also, it is just one massive box, so everything is jumbled up in a messy heap.

What I needed was something a little more personal to organise things into, something pretty that would make our family memories feel cherished rather than just STORED.

And it was exactly at this moment that Harris & Jones got in touch to see if fancied having a look at some of their beautiful keepsake boxes. (Sometimes these things are just meant to be aren’t they?)

The lovely thing about Harris & Jones keepsake boxes is that they are all handmade. I mean PROPERLY handmade, by husband and wife team Steve and Vanessa and two helpers, Zoe and Clair, all working from converted chicken huts just a few miles from the family home.

(I’m assuming that it’s one very large chicken hut that they’ve converted into a workspace rather than the four of them individually crouched in separate coops or anything like that.) 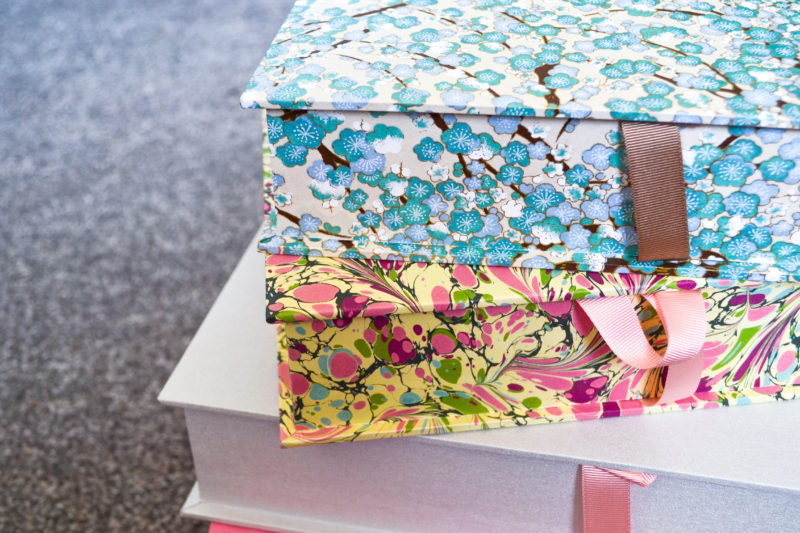 Harris & Jones sent me four boxes in total – two A4 baby keepsake boxes and two A5 boxes, one marbled and one made with beautiful Japanese silkscreen printed paper. The quality is impeccable and the patterns are really gorgeous.

At this point I was going to show you the personalisation on the top of each of the baby keepsake boxes, but then I wondered if showing you my children’s full names and dates of birth in one place might be akin to taking a picture of my credit card, so I didn’t.

Suffice to say they are beautifully done. You’ll have to look at the website for examples. The baby keepsake boxes come in a choice of four colours and three different ribbon options, so you don’t need to have masses of pink or blue if that’s not your thing. I went for one pink and one ivory linen, both with pink ribbons. On the top of each I have their names and birth dates.

Time to get out the massive plastic box and put together the treasures.

Both of the girls have similar things in their keepsake boxes, including the plastic tags they had around their ankles in hospital, congratulations cards and the cardboard tags from the end of their hospital cots. They each have a photo or two from just after they were born and Bee has the babygrow she came home in. 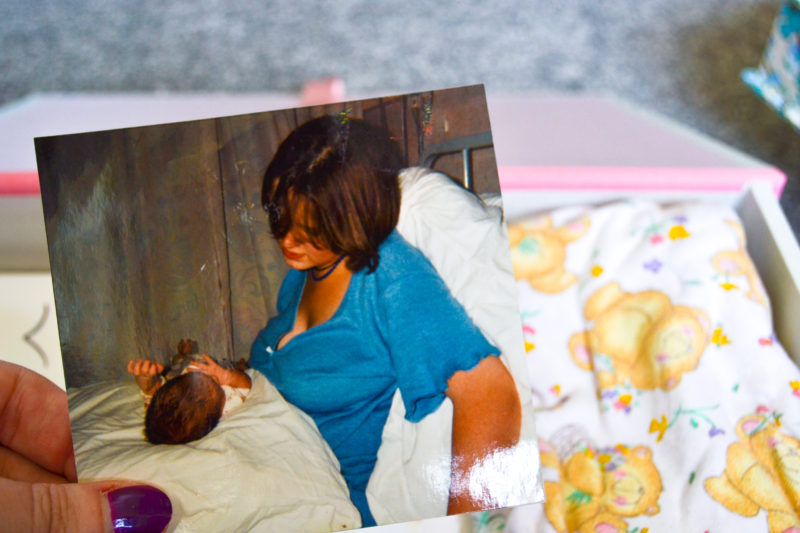 They each have their red books, although Bee’s is a lot more used. By the time Belle was born when I was the grand old age of 24 I thought I knew everything and didn’t really bother with taking her to the health visitor.

Can you tell from all the stickers that I was only 17 when Bee was born? 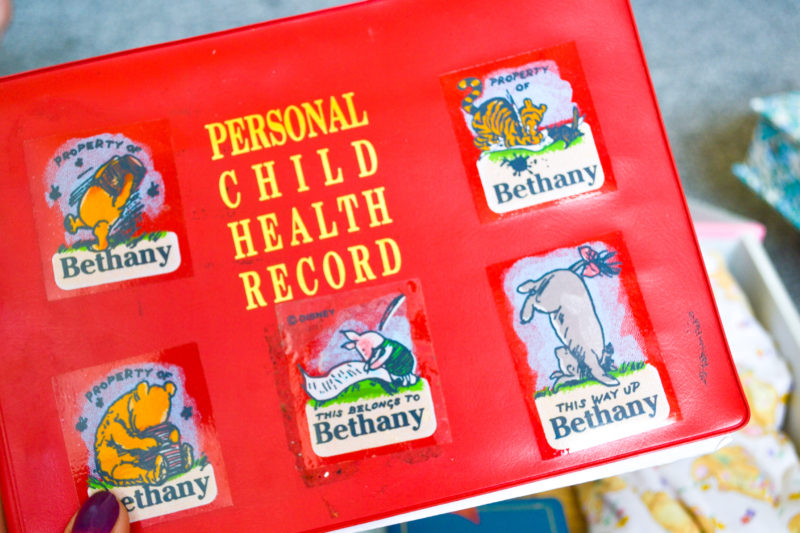 Both Bee and Belle also have a lock of baby hair in their boxes.

I say ‘lock’ – Belle’s is a bit more than that. She had hardly any hair for AGES, to the extent that even when she was about a year and a half old and walking around in dresses and skirts people thought she was a boy. Eventually it did grow, and we let it grow for ages and ages before giving her her first haircut, which involved putting her hair in a ponytail and cutting it off. 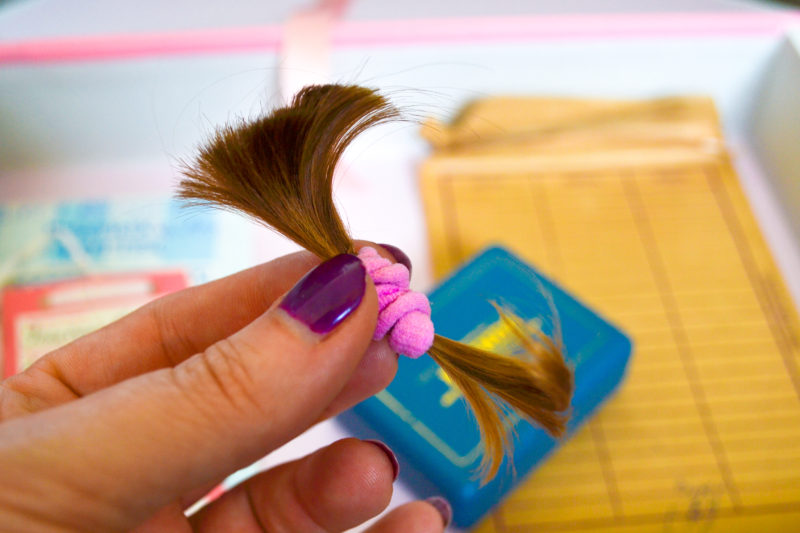 It did feel a bit sad going through everything and reading cards from people who are no longer alive, but it was lovely too to remember them, and to think about how loved Bee and Belle both were (and are) growing up.

I hope that they look back at these boxes in years to come and know that. 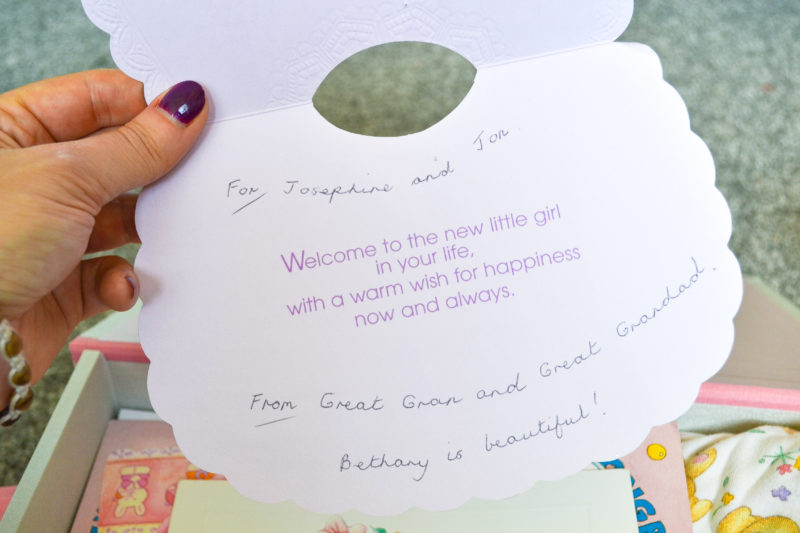 I decided to use the two smaller boxes for special cards and letters that I’ve received over the years, with one for things received from Bee and Belle and one for everything else.

I used the marble box for things from the girls. Harris & Jones’ marbled designs are created by a designer called Jemma Lewis. Jemma is a young and innovative marbler working hard to keep the art of hand marbling alive. Jemma’s designs are influenced by her love of antique books and the traditional marbled papers that bookbinders use. 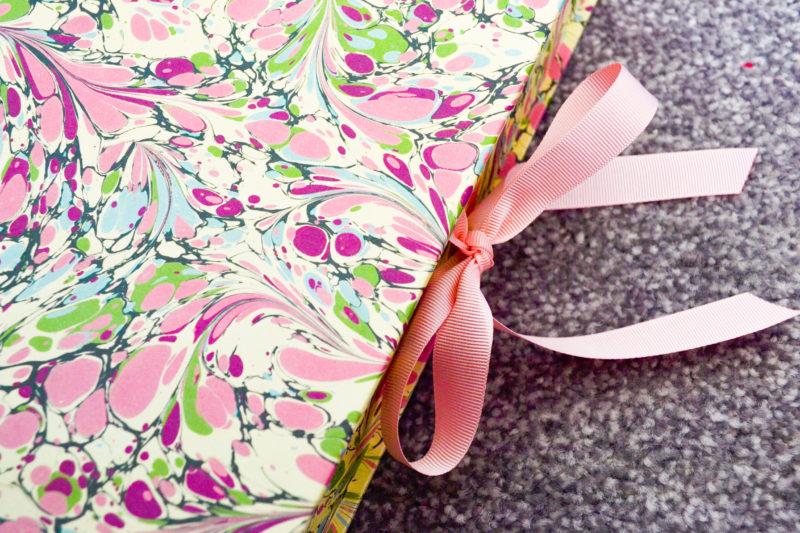 As well as the usual drawings, birthday cards and Mother’s Day cards, my marbled box contains quite a few sassy letters that Belle has written to me over the years, like this one.

My favourite bit is ‘I hope you will take this in.’ 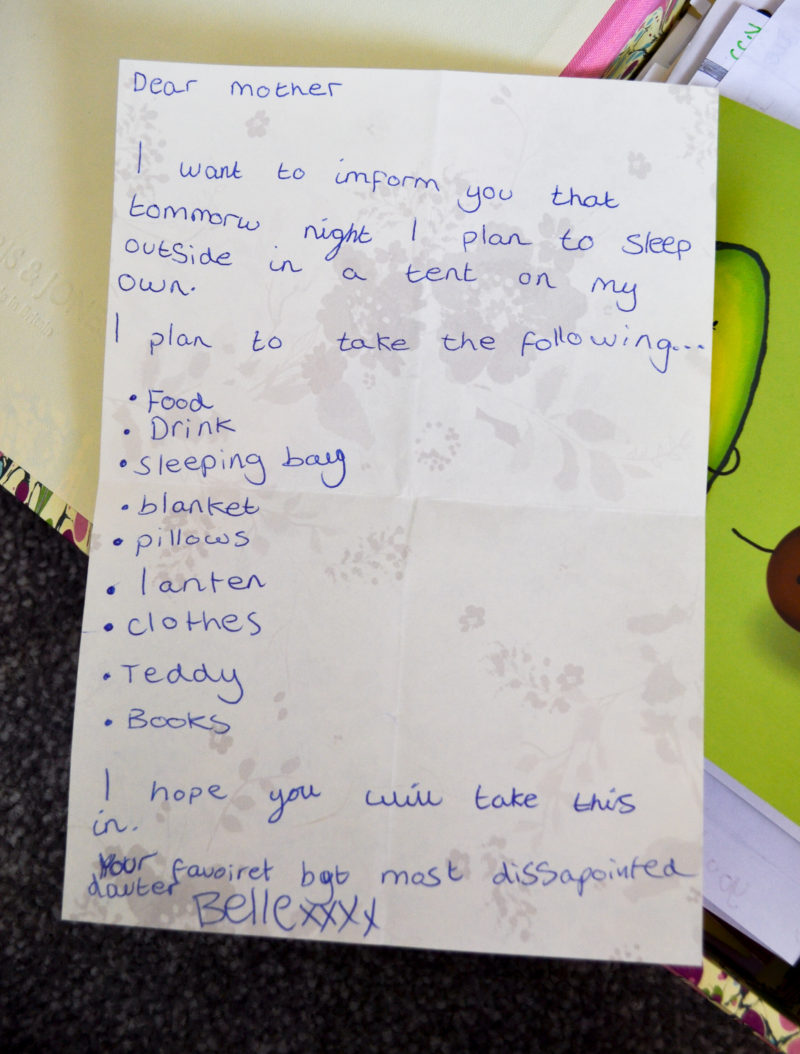 I don’t remember whether she actually did sleep in the garden. Knowing Belle at that age I think it unlikely, but she always did like making plans, so she probably enjoyed that part as much as she would have enjoyed actual camping.

Looking through all of these special memories was a really lovely way to spend a Sunday afternoon and I feel now like my treasures have a proper home. They certainly look much nicer on shelf than plastic stacking boxes.

Are you sentimental with things like this? Do you have something special to keep your memories in? 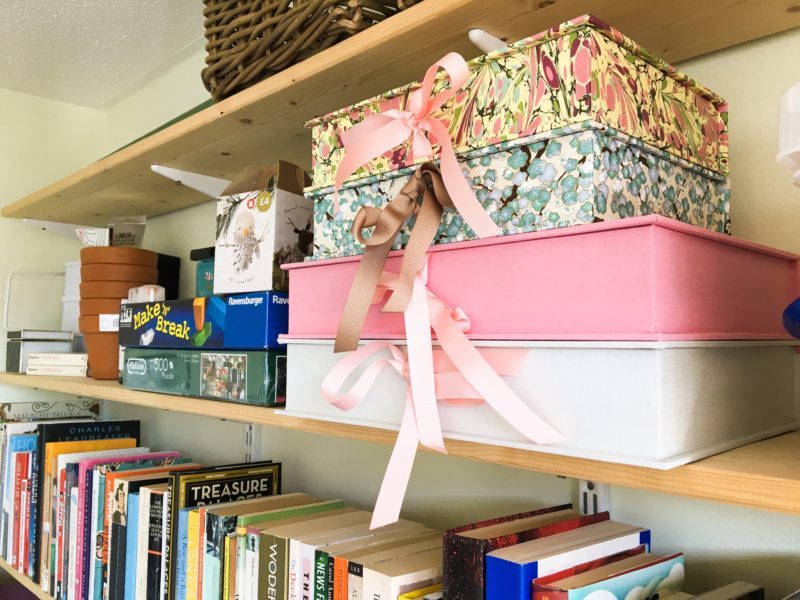 *Seriously, I watched this film for the first time about a year ago and I did NOT get romance. This guy just liked having sex on the sly didn’t he?? I definitely didn’t pick up any deep emotional connection. Feel free to convince me otherwise.