This week I had one of those moments where you feel like the universe is trying to tell you something.

I was having a bit of a funny morning one day, where I was feeling a bit unsure about something, and just kind of wandering about feeling twitchy and indecisive. I decided to go into Waterstones, because really, when DOESN’T looking at books make you feel better?

The first display I saw was this one: 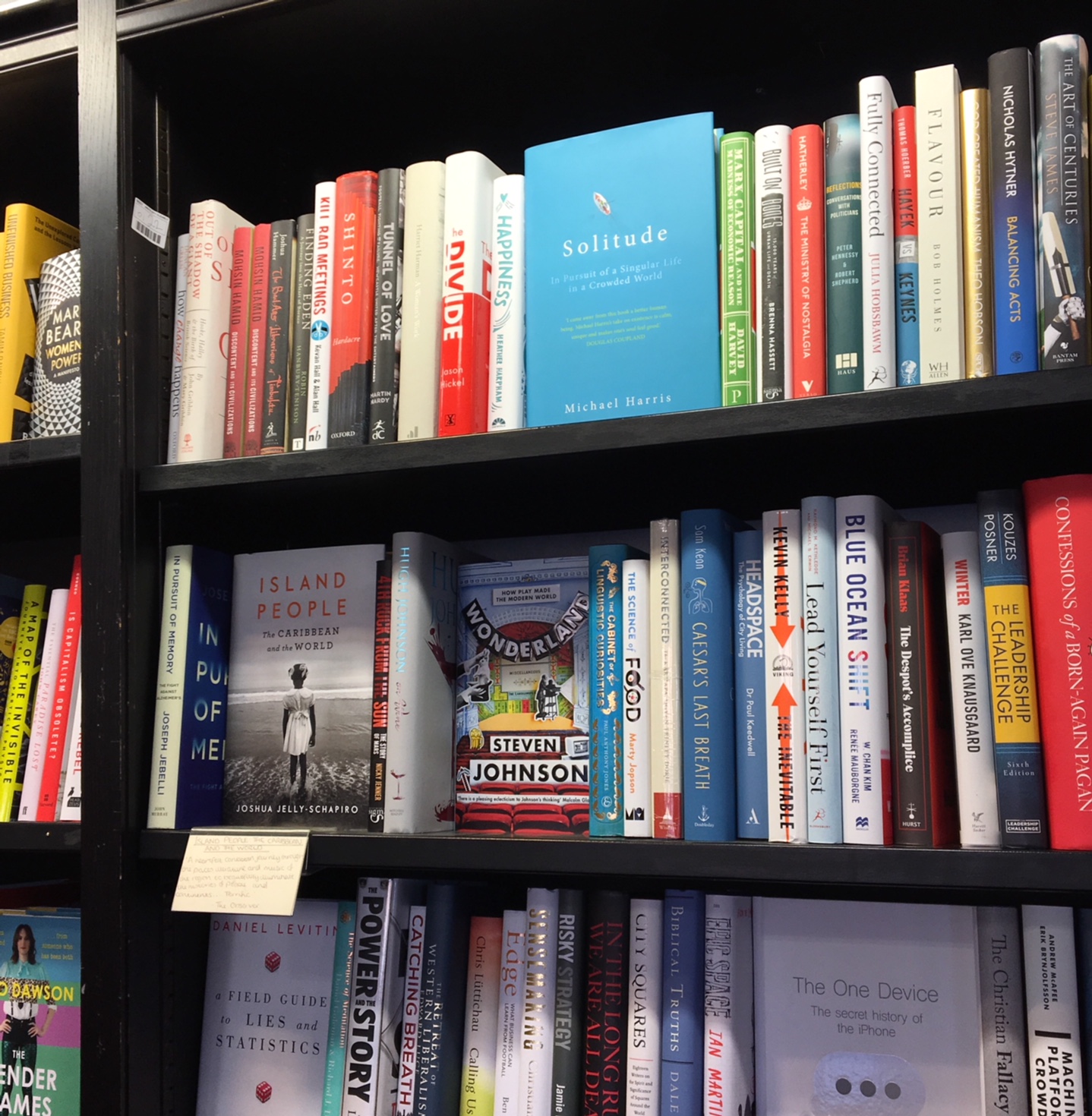 That book stands out a bit really doesn’t it?

I had a bit more of a mooch. I picked up a book at random and opened it at a random page. This page in fact: 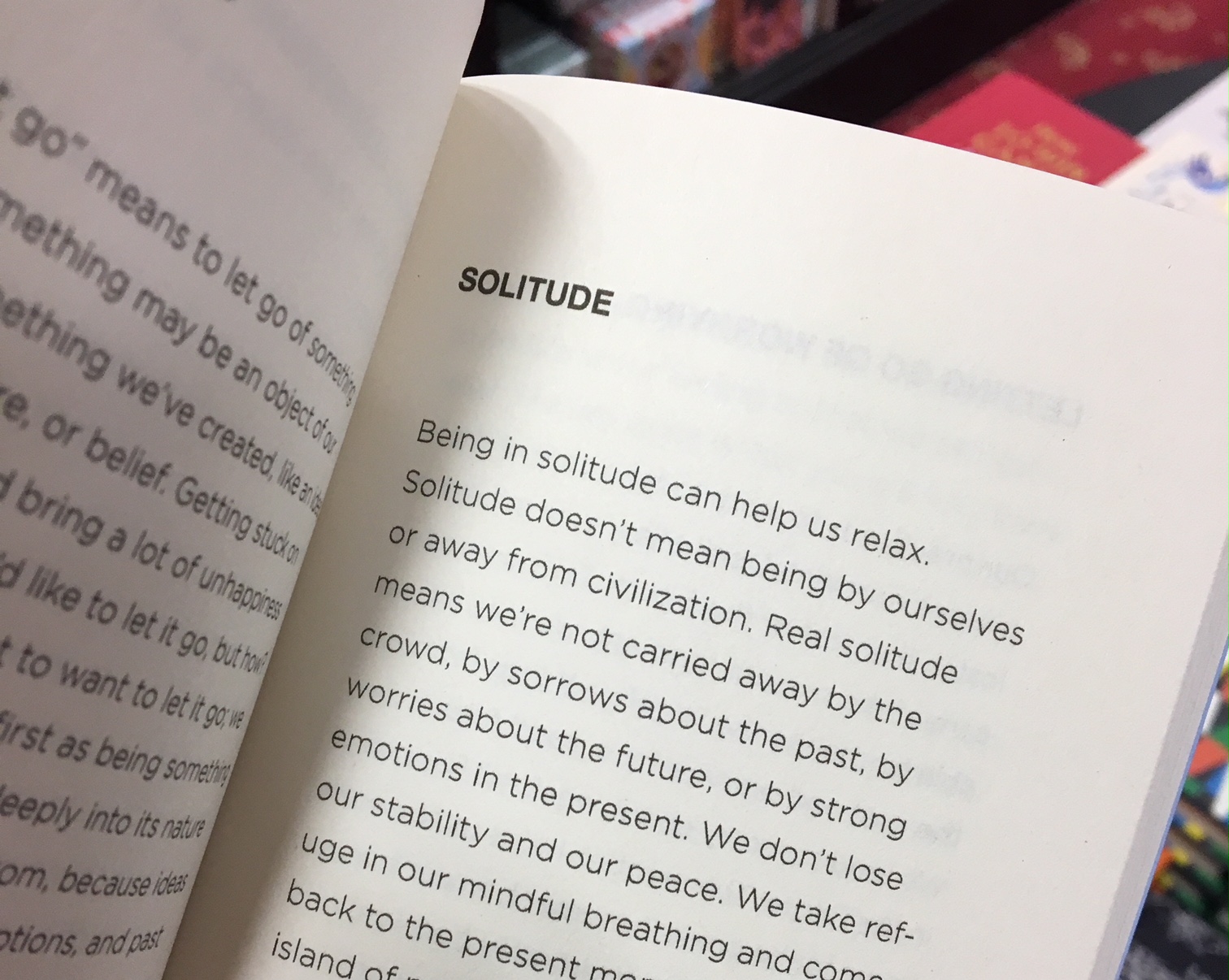 Bejesus. Could the world BE any more obvious? I get it universe, I get it.

And so I bought the Solitude book, because I couldn’t not really. I took it to the park and sat in the wintery sunshine for twenty minutes or so reading.

The book began with the story of a woman called Dr Edith Bone who was kept in solitary confinement for seven years. Now you might think that seven years in a mouldy cell not much bigger than a double bed would be enough to finish most people off, but this woman was mind-blowingly amazing. She kept herself sane for all of those years by doing crazy things like making an abacus out of stale pieces of bread and working out how many words she knew it different languages and moulding other pieces of bread into letters so that she could write poetry and then translate it.

I just couldn’t get my head around it.

The premise of the book is that in a world where we are more connected than ever before, we are, paradoxically, becoming increasingly isolated and lonely. Our social networks have swelled to potentially billions, and yet there we are, still endlessly Googling ‘fear of being alone.’

We need to step back, says Michael Harris, author of Solitude, from this crowded world, and rediscover the art of being alone. Solitude doesn’t have to equate to loneliness – we can have rich inner lives and be self-sustaining without having to have this constant social input from others and from technology.

Harris’s definition of solitude is more literal than the one in that second book I picked up. For him, solitude is about being properly alone, away not just from real people but from social interactions online. Mastering solitude is important says Harris, not just for our sanity, but for the creative process.

Think about the last time you really had a great idea. Like a properly good one, where you’d allowed it to develop slowly, and had chance to explore it in your mind. For me those moments normally come when I’m driving on my own. I have no one to talk to, nothing to interact with, no phones – it’s just me and my thoughts. Alone.

I’ve never been afraid of being alone. But then have I ever really had to be afraid? As a teenager, pre the internet, I loved being on my own. My dream day was a Sunday, when everyone else had gone out for the day and I was allowed to stay home by myself. I’d potter about, tidying my bedroom, picking things up, getting sidetracked, feeling generally pretty chill. It was only ever for a few hours at a time though.

And then I was 16 and pregnant, and then the Internet came along, and since then how much time have I ever really spent by myself? With children around you’re never left to daydream for long, and working online for a living means that it’s hard for me to justify shutting myself off from the virtual world.

Sometimes I want to though.

Sometimes I’ll be driving somewhere, and my mind has gone into that place of peaceful solitude, and suddenly I don’t want it to ever end. I want to just keep on driving.

Solitude includes a quote from Dr Bone, which sums up exactly where I want to be in life:

‘I believe I know only the cure, which is to make one’s center of life inside of one’s self, not selfishly or excludingly, but with a kind of unassailable serenity – to decorate one’s inner house so richly that one is content there, glad to welcome anyone who wants to come and stay, but happy all the same when one is inevitably alone.’

How richly is your inner house decorated? How happy could you be there alone?