I’ve never particularly been the sort of woman to have girl crushes.

I did have girls at school that I wanted to BE like (and as a result named by daughter after, because I was 17 and what else would you do at that age?), but that was really just because I dreamed of being as popular as them.

I do have a teeny tiny crush though on Reese Witherspoon. I think she’s just awesome and I love her in absolutely everything she does. If I had to put together a top ten favourite films of all time, it would contain Legally Blond AND Legally Blond 2. That’s how much I love her. I watched Legally Blond on a plane a few months ago and that scene in court where she nails Chutney for the murder of her dad – it actually gave me goosebumps.

‘Isn’t the first cardinal rule of perm maintenance that you’re forbidden to wet your hair for at least 24 hours after getting a perm at the risk of deactivating the immonium thygocolate?
…and wouldn’t somebody who had, say, 30 perms before in their life be well aware of this rule, and if in fact you weren’t washing your hair as I suspect you weren’t because your curls are still intact, wouldn’t you have heard the gunshot, and if in fact you had heard the gunshot Brooke Windham wouldn’t have had time to hide the gun before you got downstairs…’

When Sky Atlantic asked then if I fancied driving around for an hour in a Volvo XC90 to watch the first of a new Sky Atlantic series called Big Little Lies, starring Reese Witherspoon – well, I knew I was going to love it before I even saw it. (Volvo sponsor Sky Atlantic, it wasn’t just a weird PR with an overly specific interest in car manufacturers.)

I was not disappointed. 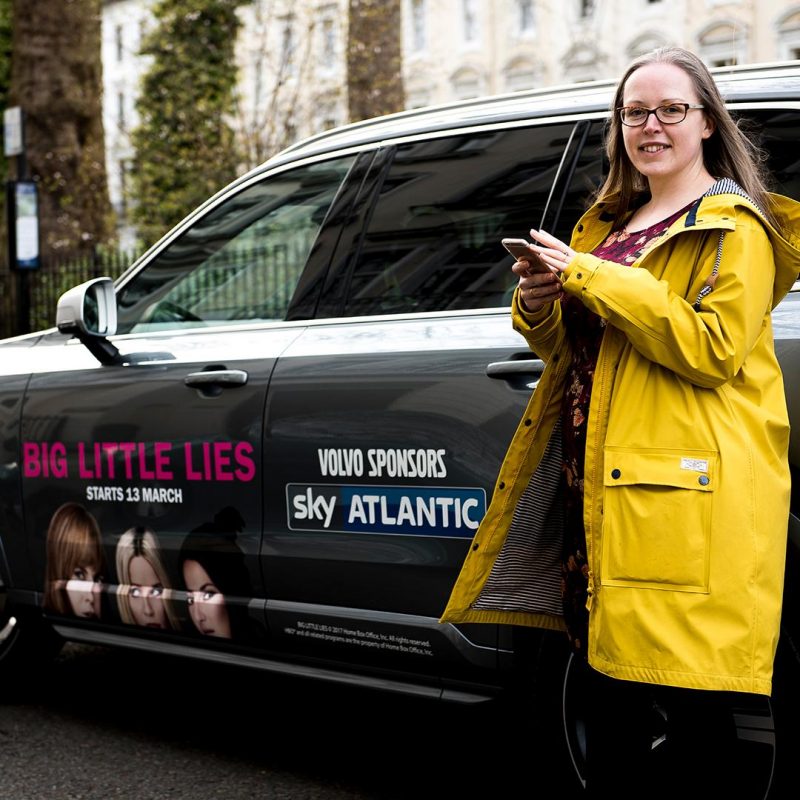 The first episode gives us a peek into the lives of four families living in the same small, American coastal town, all with children at the same school. The scenes of day to day life though are interspersed by police interviews with parents from the school. Someone had been murdered – dum dum DUM! – but we don’t know who did it. Even better, we don’t even know by the end of the first episode who the victim is.

Murder aside, we can already see in the first episode of Big Little Lies that everything might not be quite as it seems. Meaningful glances, odd conversations, awkward silences – it’s clear that while on the surface the town is a friendly one, underneath the sheen of kindness, something is simmering.

The experience itself was a lot of fun. I was slightly worried about feeling queasy watching TV in the back of a car, but the XC90 was a lovely smooth ride, and very spacious too – at one point I think we had six of us, plus camera equipment, and I still had room for a big box of cakes on my lap. (I’d been to visit a lovely woman called Olivia, who runs Livia’s Kitchen, before the session, so I had a whole load of homemade, wholesome treats to share with the crew. They seemed pleased.) It was definitely a treat to spend a casual hour in the middle of the day being driven around London, watching TV and eating a brown rice raw chocolate crispy cake.

As well as the wonderful Reese, Big Little Lies boasts a rather stellar cast, including Nicole Kidman, Shailene Woodley, (who you might recognise from The Fault In Our Stars and the Divergent films), Adam Scott, (who I find it difficult to imagine as anything other than the successful brother in Step-Brothers), and Laura Dern, (Jurassic Park.)

You’ll have to wait until March 13th, when Big Little Lies comes to Sky Atlantic, to see exactly what is simmering beneath the surface of small town America, but if the first episode is anything to go by, Big Little Lies is definitely worth setting up to record right now.

Post in association with Sky Atlantic and Volvo. All opinions most definitely my own.