I’m a bit loathe to call this a recipe, as the whole point of bubble and squeak is to use up leftovers. I don’t want you to look in the fridge and think ‘Oh, I’ve only got two leftover sweet potatoes, so I definitely can’t make this…’

That’s really not the point.

I’ll just tell you what I did, and then you can copy it, or have a look in the fridge and switch in other ingredients. I’m cool with that.

So, food waste. I’m actually pretty good at this, mainly because I’m so slack at doing the shopping in the first place that I never have enough in the fridge for dinner, let alone for leftovers. Since I upgraded my phone though, and no longer have to delete Twitter just to take a photo, food waste has become a bit more of an issue. I’ve rediscovered the joy on online food shopping you see, which means I get all over excited and order loads of things for actual recipes. Then I remember that I’m only home one night in the next four, and wonder what I’m going to do with it all.

This afternoon for example I’m leaving work early to make four steak and ale pies for the freezer (never done that before) because I have all the ingredients but we are going to my mum’s for tea.

Sainsbury’s is on a bit of a mission to reduce food waste too, with their #WasteLessSaveMore initiative.

Households in the UK waste a mind blowing 15 million tonnes of food and drink every year. To bring this to life, that includes 5.8 million potatoes, almost 6 million glasses of milk and an astonishing 24 million slices of bread everyday!

Not only is this a huge problem for our environment, but families are throwing away money along with food. In fact, the average British family wastes £700 per year on food that could have been eaten, but is thrown away instead, that’s around £60 a month.

Sainsbury’s is passionate about helping families waste less, and save more, which is why they’ve invested £10 million in helping shoppers reduce food waste at home. A big part of that is helping families make better use of their leftovers – which is where you come in!

The website is definitely worth a look as it has some great recipes for using up leftovers, tips on freezing food properly – loads of useful stuff. I love the look of their eight winter salads, especially the beetroot one. I love a bit of beetroot.

How to make spicy sweet potato and spinach bubble and squeak

I started off with one large sweet potato, which had been cooked the day before. Sweet potato is less starchy than regular potatoes, so it works particular well when they are genuine leftovers and have had chance to dry out a bit. If you’re cooking them fresh, make sure to drain them really well. Mash the sweet potatoes up with a little bit of butter, salt and pepper. You won’t need to add any liquids.

I used ground cumin and garam masala to spice my sweet potatoes as these are my favourites. I went with a liberal sprinkle – maybe around half a teaspoon of each? 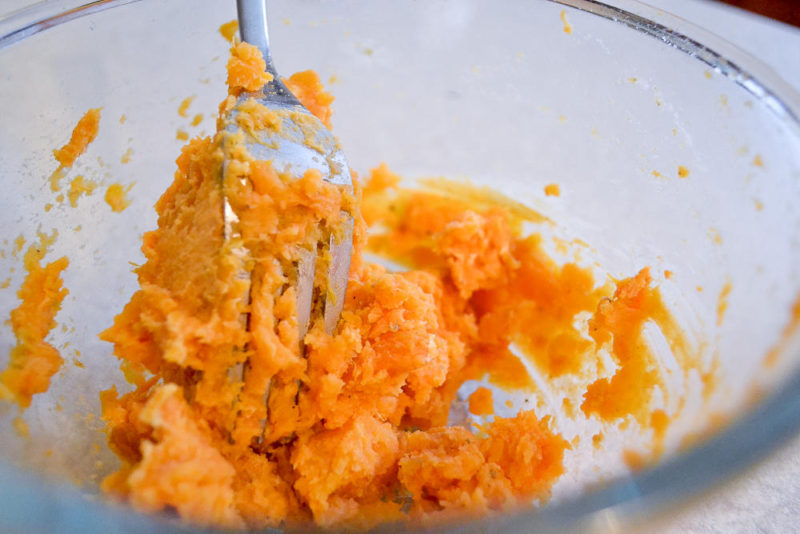 Now the spinach. If you have leftover cooked spinach you could use this, but I used uncooked spinach as I forever have half a bag of the stuff at the back of the fridge, plus I quite like that the spinach retains more of its consistency in the end product. Now spinach is one of those things that you can’t quite believe will ever be small, so be brave. I added a couple of handfuls of spinach to my sweet potato mixture, panicked a bit at the sheer volume of it, and then beat it vigorously until the spinach had miraculously shrunk to about a tenth of its original size. You could swap the spinach here for any kind of veg really – leftover cabbage, sprouts, peas – whatever you fancy.

This amount of mixture made four patties, which is enough for two portions. You could keep them chunky like this, but I squished mine down a bit so that they’d cook through a bit more easily, and I could then stack them. 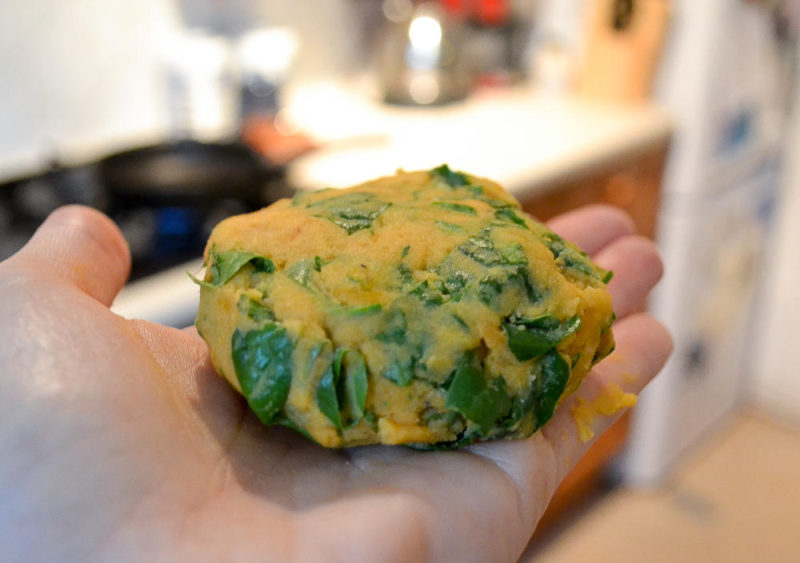 I fried the patties in a little bit of Fry Light coconut oil spray, but you can use whatever you have to hand. Cook them until they are nicely brown, and look like the sort of thing you might get served in a nice vegetarian cafe.

I decided to turn my spicy sweet potato and spinach bubble and squeak into a breakfast, by topping it with some sliced avocado, (smash your avocado for optimal hipster chic), and a poached egg. These could easily form part of a main meal though, or a tasty lunch. They’re extremely versatile.

Top poached egg tip – crack the egg into a cup first, so that you can carefully place it into your hot water in one easy movement.

Stack everything up into a tower, top with a little black pepper and tada! 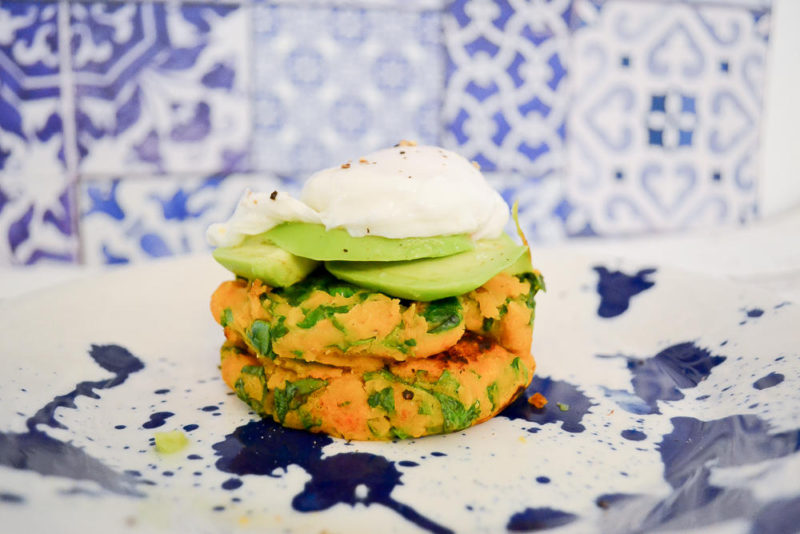 That looks nice doesn’t it? I was pretty pleased with it actually. It was really tasty, and the spices added just the right amount of interest without being overwhelming. There’s nothing quite like a runny egg to set you up for the day ahead.

Do you have any favourite recipes or top tips for using up leftovers? Leave a comment and let me know!

Like the sound of this non-recipe? Here’s a handy image for you to pin for later! I’m so good to you. 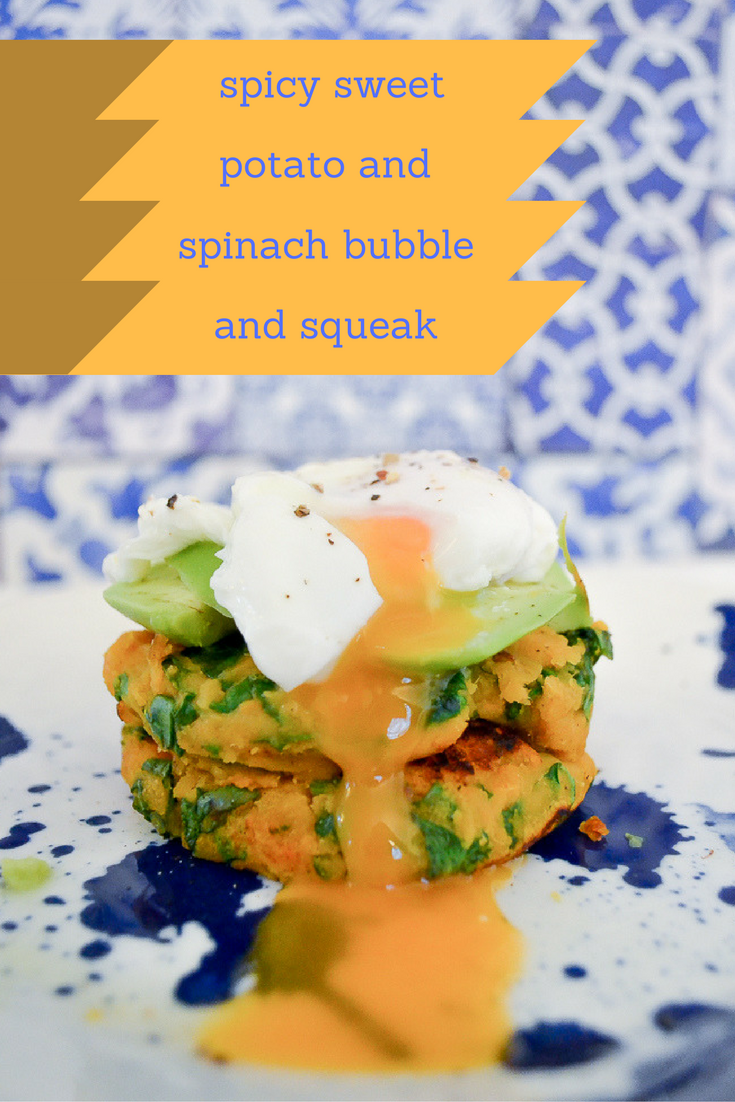 Produced in association with Sainsbury’s