Bee was round for tea the other night. Belle was cooking and we were watching Dirty Dancing because apparently neither of my children have ever seen it. (Which officially makes me a bad parent.)

‘Mummy’s smiling a lot,’ said Belle, from her position in the kitchen chopping onions, ‘it looks weird.’ (Our downstairs room is one biggish space that’s half a kitchen and half where we watch TV.)

‘Yeah, why are you smiling?’ asked Bee.

‘Yeah but not that good,’ said Bee, ‘not as good as Wikipedia said it was going to be.’ (I don’t understand why she can’t just watch a film and wait nicely to see for herself what happens at the end.)

‘No one likes life,’ she said, ‘they do it, but no one actively enjoys it.’

‘PAH!’ said Bee, looking really sceptical by this point, ‘NO ONE likes getting up!’

Because actually I do, most of the time. I mean sure, there are days when I’d rather not straight away, but that’s more because I’m enjoying so much the feeling of being in bed, not because I particularly have anything against life outside of bed. I’m just generally quite cheerful. (Which is why I find it so hard when I do have periods of feeling sad or anxious.)

Most of the time I just bumble along, looking forward to lunch, buying props for photos, not thinking too much about anything serious. 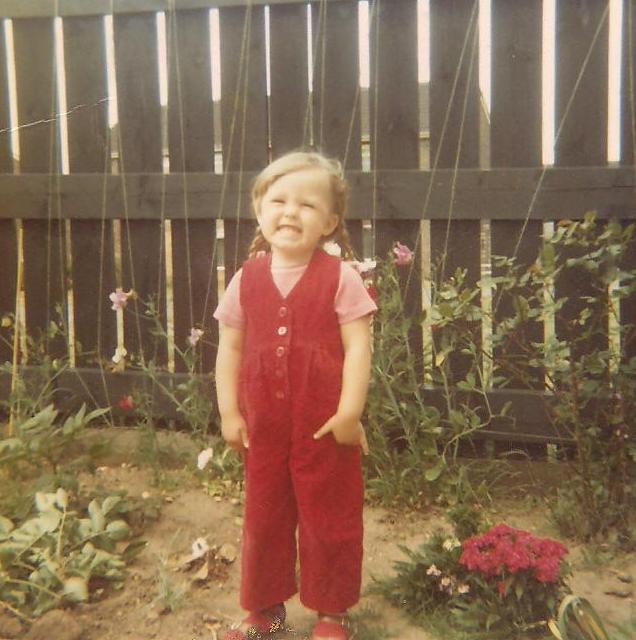 That’s me when I was little and I basically look the same now, but bigger.

I’ve found you see that if you smile, even if you’re on your own, you can’t help but feel a bit happier. When I went through a period of feeling crap a couple of years ago, I actually used to hold a pencil between my teeth, horizontally. It forces your mouth up at the corners into the shape of a smile and tricks your brain into thinking you feel better.

(Your brain is pretty gullible most of the time. It just kind of believes your body. If you slouch around, sighing and frowning, it will join in and make you feel bad. If you stand up straight and smile, it can’t help but feel better, even if just a little bit.)

Start with your mouth, just curl the corners up. And then make it fill your whole face – feel it in your eyes. Imagine you’ve just seen a tiny kitten being rescued by a Granddad with a big white fluffy beard, holding hands with a really chubby toddler. The toddler is laughing and stroking the kitten and looking at his Granddad like he is the best thing in the whole world.

And there you go, that’s what it’s like in my head.