When Belle was small she had a few key things that she liked to do:

4. Put things in the toaster

I only remembered number four recently when I found this photo of her. It was stuck inside a book I hadn’t read for a long time: 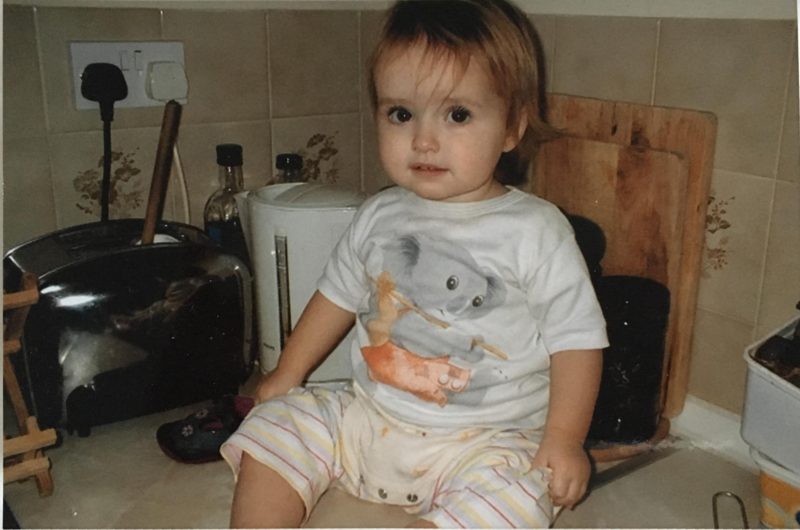 You’d be forgiven, if you looked at the kitchen tiles and her t-shirt, that this must have been taken at some point in the 1970s and that Belle is now 38, but she’s only 14. We’ve just lived in a succession of slightly questionable rented houses and, because of number 1 on the list, I couldn’t go back to work properly for two and a half years after Belle was born, so most of her clothes came from charity shops.

She’s also sat up on the kitchen side because of point 1. The floor was just too far away from me for her liking. She used to spend a lot of time sat up on the kitchen side. It’s okay though because you can see from the photo that I’ve been a responsible parent and switched the toaster off at the wall before letting her put things in it. Plus she only fell off onto the floor once and she seemed fine once I’d calmed her down.

Of course there were times when even though several of her conditions were met, that she still wasn’t happy. I have a photo somewhere for instance of Belle, in a white shirt and denim shorts, sat on the kitchen side, crying, and holding a Philips head screwdriver. Items 1 and 2 are checked, so I’ve no idea why she is upset.

It was lovely discovering this photo and being reminded of Belle as a baby, wedging random things into electrical appliances. She may have grown out of number 4 now, and isn’t quite so keen on milk, unless it’s the chocolate variety, but she still likes number 1.

That was always my favourite anyway.