Just lately, I’ve decided to embark on a tissue mission. (It’s not as creepy as it sounds.)

You know how much I hate sniffing? I mean, all parents do, but it really grates with me. Remember that time I sat next to that man on the bus who sniffed 104 times? I do. Even though it was nearly three years ago.

Well, I decided that instead of just complaining to you about it, I would take matters into my own hands. Who knows, that sniffing bus man might have been sat there, helpless, just waiting for someone like me to come along and offer him a Kleenex, and instead, all I did was write about him in a mocking way.

That’s not the spirit of kindness we need to be promoting in the world is it?

Instead then, I’ve started carrying around those cute little packets of Kleenex around with me, and offering them to people who seem a bit sniffly. (Yes, I am that crazy lady, hovering next to people with colds.) 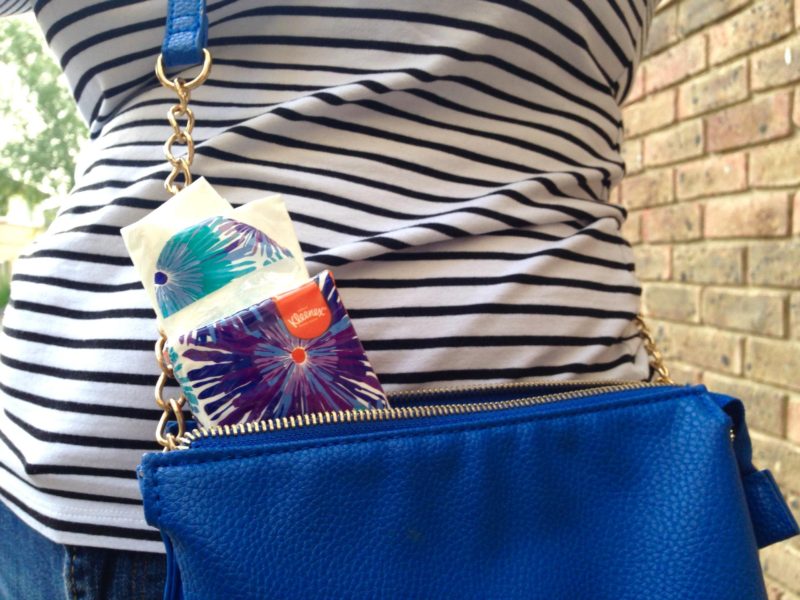 Never one to do things by halves, I decided that the London underground would be the best place to start. I love going on the underground and freaking people out by smiling, making eye contact and generally looking cheerful. Recently I went to meet my 20 year old daughter Bee, who lives in London. We were travelling back from somewhere, and I went as far as pretending to be a train on the escalators. I thought it was fun, she seemed less impressed.

To ease myself in gently, I started with a few ‘bless you’s when I heard people sneeze. People generally seem to like this. I actually had it happen back to me on the tube, from a fairly scary looking guy who must have been in his 40s. When I said thank you, and he smiled, he was suddenly far less scary.

I love making these little connections with people, especially in places where things feel so fast paced and impersonal, like the tube. It feels like we go into our own little bubbles, scowling out at the world, forgetting that we are all just people, doing our best, going about our business. When you pop that bubble, and connect with someone, even if just for a few seconds, it can give you a real lift. It’s like saying to someone ‘I can actually see you, I know you’re a person with real feelings’ and having them say it back, all wrapped up in two little words – ‘bless you’. I’d definitely encourage it.

The next step though is going as far as offering a tissue.

This is a little bit scarier, but I can honestly say that no one that I’ve offered a tissue to so far has said ‘What?! A tissue? Are you some kind of freak?’ So really don’t feel nervous about it. It’s pretty sad really to think that something as simple as offering a tissue to a stranger could be something to be nervous about. We’re all just people remember guys?!

Not everyone has said yes to a tissue, but everyone has seemed pleased to have been asked. A little confused perhaps sometimes, but always appreciative. I don’t think you could fail to feel a little bit better about yourself could you, if someone took the time to stop and offer a gesture of help, even if it’s something as simple as a tissue?

My favourite so far happened on a station platform. I heard someone sneeze as I was coming up the stairs, so my ‘bless you’ from the stairwell was probably a little bit of a surprise to the woman sat on the platform bench with her back to me. She took it well though and smiled, sniffing a thank you.

“Really?” she said, sniffing again. “That would actually be great, thank you!”

“You’re very welcome,” I said, getting out my little packet of Kleenex, and feeling very pleased with myself.

She took a tissue, smiled and thanked me again, and I walked away with an extra spring in my step, that little surge of happiness that comes just from doing a Nice Thing.

Why not go on a tissue mission of your own? You’ll be helping people, feeling good about yourself in the process, plus it means you’ll never have to sit next to someone on a bus while they sniff 104 times in a row.