I thought I would jump on the EU referendum wagon today, for a short rant, not because I am hugely political, but because I saw this outside Wetherspoons on my way to work: 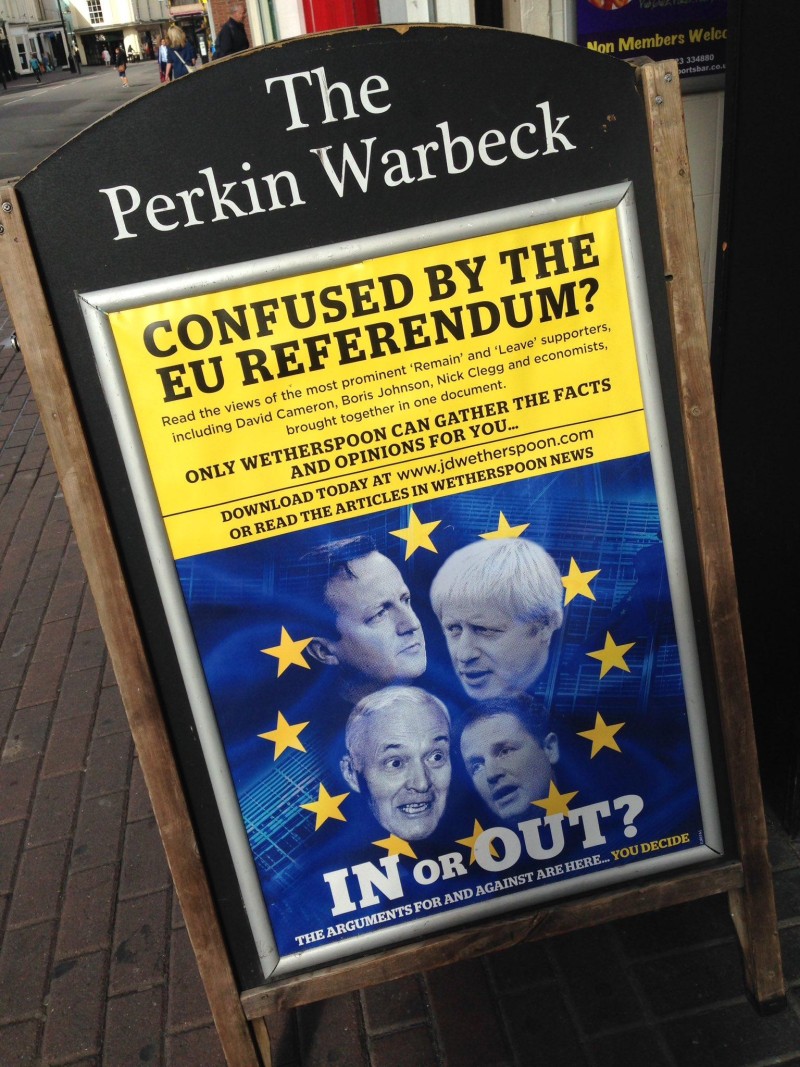 Let’s take a minute shall we?

“Only Wetherspoon can gather the facts…”

Now I’m no expert, but instinctively, this doesn’t feel true. Surely there are people other than Wetherspoon, better qualified, more experienced perhaps, who might be in a slightly better position to gather the facts about the EU referendum for me?

In response, someone on Twitter shared this picture with me, which I hadn’t seen, but is also very funny. This one is true.

@mummyblogger Have you seen the @PrivateEyeNews take on this! 😂 pic.twitter.com/wWNFiuETbj

You could argue I suppose that when it comes down to it, Wetherspoon may be as well informed as anyone else who will be voting, and this is the bit that really annoys me – why is this even a referendum? Most of us, myself included, are just too stupid to be able to make an informed decision about this. This is an example of why we have an elected government – we have picked people to find out about stuff, and make these sort of decisions for us. The fact that we, the ignorant masses, have been put in charge of this terrifies me. It feels like a parent letting a toddler gorge themselves on Haribo, knowing they are going to be sick – someone needs to step in.

We can’t be trusted.

The majority of us will be voting based on fear, or misunderstanding, or because the newspaper we read tells us to, or because a celebrity we admire has said they are voting in a particular way. I have a economics degree, and yet I will be voting to stay in mainly because Boris Johnson wants out, and I feel like I have to disagree with everything he stands for on some kind of principle, the very foundations of which I’m not entirely sure about.

We are not informed enough to make these sorts of choices.

Have the government not taken a moment to look around them and realise this? We go out in flip flops the minute the sun pokes through the clouds, we eat ourselves to the point of obesity just because sugar is fun, we watch X Factor year after year even though it’s ridiculous, we eat in Wetherspoons for heaven’s sake.

We are not clever enough for this shit.