If you don’t have time to read this whole post, please watch the video of Belle making tomato soup right at the end as it’s very sweet!

As you may have read last week, we’re currently taking part in a 21 day healthy eating challenge, supported by The Co-op. Last week we kicked off by looking at a typical day in the life of Belle, and I was slightly ashamed by the prominence of chocolate chip brioche on the menu.

Still, looking on the bright side, it gave us a nice low starting point, so surely it would be easy to make a positive difference?

As we’re just about 7 days in at the time of writing, I thought it might be nice to pick out one easy change for each day. The idea with any change is that you don’t need to do something massive to make a difference, and in fact change is often more sustainable if you start small. All of these 7 changes are things that you could do yourself, this week, now even. So what are you waiting for?

We could all do with doing this I’m sure. Getting Belle to drink enough water feels like a constant battle, so activity has cranked up a notch to make sure she gets what she needs. A lot of people talked in our healthy eating Twitter chat last week about swapping to sugar free squash to reduce sugar, but I’m wary of the artificial sweeteners that are crammed into squashes, so try to just to stick to water. It’s cheaper too!

Make the switch to wholemeal

This feels like such a no-brainer that I wonder why we’ve never done it before. Seriously, how have I gone 37 years eating white pasta when there is no extra cost, time or money wise, in switching? In fact, wholemeal or brown versions of things are really much tastier too. This week I made a variation of spaghetti bolognese, just using what we had in the cupboards, which inadvertently also turned out to be vegan. 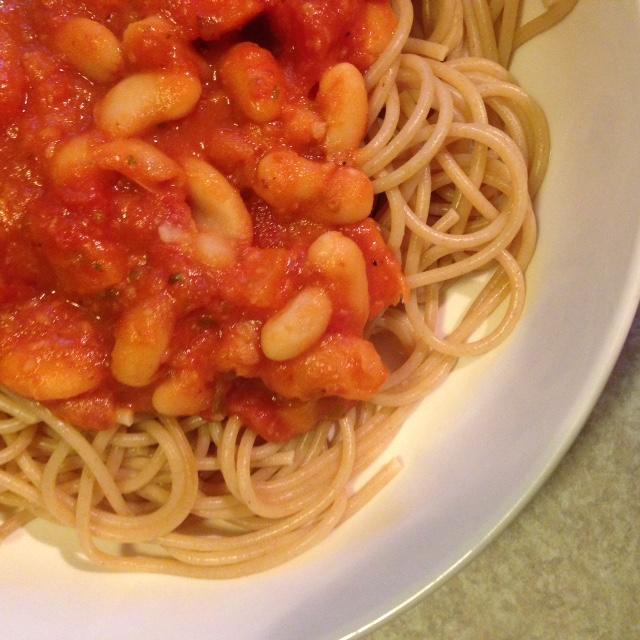 To recreate it, gently fry two diced carrots, (or onions, or peppers, or whatever needs using up,) then add a tin of chopped tomatoes and a tin of cannellini beans. I used these because I had them sat in the cupboard, inherited from when my sister moved to Ireland and made me rehome all her tinned goods, but you could use anything really. Add some water and seasoning and simmer until it’s a nice saucy consistency. (Technical term.)

Although this can feel time consuming, it’s a better way to eat as you will tend to use fresher ingredients and can see exactly what’s going into your food. It can be cheaper too. Take a jar of bolognese sauce for example. Have a look at the ingredients and you’ll see it mostly just tomatoes, but with quite a few extra ingredients, many of which you don’t even need. How hard is it really to switch instead to fresh chopped tomatoes, or even a tin, plus a pinch of salt, pepper and herbs? Not hard at all is the answer.

Be creative with fruit

I don’t mean Miranda style, we’re not looking to make friends here, I just think it’s good sometimes to think a little bit outside the box because let’s face it, sometimes apples are just boring. Smoothies are always a popular choice with kids, and there are lots of ways to get fruit into your diet that doesn’t have to be dull. My very clever fiance made a batch of Happy Pear homemade fig rolls at the weekend, made with dried figs, ground almonds and agave syrup instead of sugar. This recipe wasn’t cheap, but it was delicious, and full of good things. So really it was totally fine that I ate 18 of them. (True fact.)

I don’t know about you, but over the years I’ve come to dread that time of the day, around 4.30pm, when people start asking me ‘What’s for tea?’

Because truth be told, I very rarely know by 4.30pm what I’m going to cook. It very much depends on what I can find in the cupboards. (Hence the carrot and cannellini bean spaghetti.)

If you can plan your meals in advance you will save time and money, and will find that you naturally eat better because you can get an overview of the week, and a see what you need to include where. If you’re stuck for inspiration, The Co-op have a cool meal idea generator that you can try.

If I had a pound, or a penny even, for every time I had found a squished satsuma at the bottom of Belle’s school bag at the end of the day, I’d have enough money to pay somebody to come in and make her a smoothie every morning. Unfortunately, parenting is unpaid, bummer.

We have tried making lunchboxes a little healthier though with some simple swaps. Instead of crisps or chocolate bars, how about a Babybel or a squeezy yoghurt? Raisins instead of a Wagon Wheel? Or how about a tasty fruit and nut mix? This is Belle’s favourite:

I’m encouraging this as an after school snack for Belle rather than just the neat chocolate buttons or standard chocolate chip brioche. Small changes. @cooperativefood #livewell #healthyeating #cashewnuts

A photo posted by Josephine Middleton (@slummysinglemummy) on Oct 5, 2015 at 8:55am PDT

And last but not least…

Get children involved in the cooking process

This one works really well for us, as Belle really enjoys cooking and particularly enjoys being praised. She’s cooking more meals in school Home Ec classes too, like cottage pies and lasagnes, and likes to recreate them at home. This week I set her the challenge of copying this Co-op tomato soup recipe, as that’s one of her favourites:

My fiancé helped to put the video together and we think the soup looks pretty good!

What quick changes do you think you could make to your family diet?

Produced in partnership with The Co-op.