I had a check up on my list of 40 things to do before 40 the other day and had a mild panic. For a start, I only have 30 things on the list, which doesn’t feel quite comprehensive enough for a list of 40 things. I’m not so worried about that though, as I have purposely left space for random things that I knew I would forget about.

Slightly more concerning is the rate at which I am ticking them off. I made the list when I was 35, meaning I had to accomplish them at the rate of eight per year. I was 37 in April, which means I should have done at least 16 or 17 by now.

I have done nine.

Still, I have three years to go, so I will have to make sure the extra ten I’ve yet to add are simpler to achieve than some of the existing items. ‘Buy a house’ and ‘publish a book’ may have been a little ambitious.

A couple of months ago I did manage a trip to Bristol with Bee to tick off one more – place a bet in a casino. I included this on the list because I have watched and read so many James Bond films and books, and imagined that all casinos would be just like this – dashing men in suits, cocktails, me three stone lighter and wearing a floor length ball gown, that sort of thing. I researched the best UK casinos, fantasised briefly about a night out at the exclusive Ritz Casino, checked my bank balance and instead found myself in Millennium Square in Bristol at two o’clock on a Tuesday afternoon, wearing jeans.

You will not be surprised to hear that the atmosphere in a Bristol Casino on a sunny, weekday afternoon was not terribly reminiscent of Casino Royale. Altogether there were about seven people inside, all on their own. It was predominantly men, but there was one middle aged woman sat alone at the blackjack table, looking like she might at least have a vaguely interesting back story. All in all it was less than glam.

We mooched about for a little while, feeling suitably awkward, and wondering exactly how it worked. Nobody rushed to help us, or offered to teach us the rules, and all of a sudden I felt about 12 years old. It’s exactly the sort of situation I find myself unprepared for as a parent – guiding your teenage child through the minefield of daytime gambling with a confident and sophisticated air.

There were tables for blackjack and roulette, and other things we didn’t understand, but in the end we settled on roulette machines. The wheel itself was real, but bets were placed through an individual terminal, so you’re spared the embarrassment of putting chips down in the wrong place and generally looking stupid.

My strategy was classic James Bond – bet on one colour to win and keep to the same colour until it changes on the table. When it does, you swap, and stick to that one. It sounds a bit odd, but it actually seemed pretty effective. Its success is dependent upon getting good runs on the colours, but my table was spinning in my favour, giving successive runs of four or five colours at a time. Bee’s strategy of always betting on the number six, plus whichever random button she happened to press, was less lucrative, and her £5 stake money quickly dwindled.

My money, on the other hand, grew steadily. I decided I would wait until I had doubled my money, and then cash out, meaning I could cover Bee’s losses and still come away having made a profit on our combined £10 stake money.

And here’s my ticket to prove it. An overall profit of 40p! Not bad for my first try but probably not enough to warrant investing in the ball gown just yet. 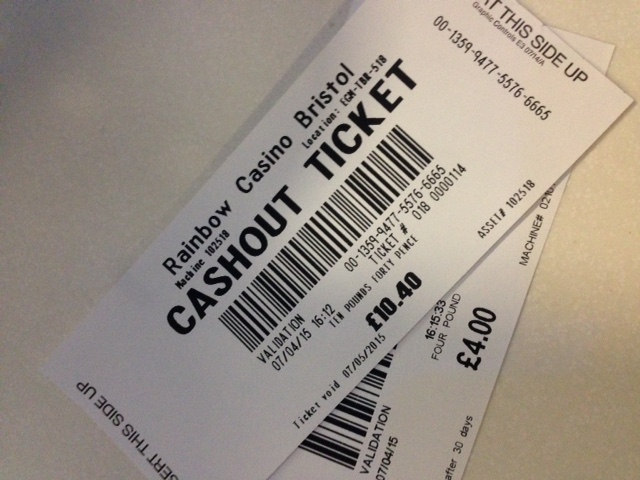