That’s six whole pounds. Be prepared for a rollercoaster of a story.

So, a couple of weekends ago we went off to Devon to stay at Ladram Bay holiday park. I’ll be writing more about that soon but I wanted to tell you a little story first about what may possibly have been the highlight of my whole weekend. My massive bingo win.

The weekend was a bit of a weekend of firsts. For a start, it was my boyfriend’s very first time in a caravan. Can you even believe that? I hadn’t realised that it was possible to get to 35 and not have had a caravan holiday. Perhaps this is just me though – when we were little all of our family holidays were in caravans in Devon or Cornwall, and Belle absolutely loves it, she’s all over any sort of mobile home mini break.

Secondly, he had never played bingo. This I could understand a little better, as bingo is not traditionally the preserve of privately educated men. I’ve had plenty of distinctly Glitzy Bingo experiences at random village hall ‘family fun evenings’, (I use the term ‘fun’ in the loosest possible sense), and have been once to Mecca Bingo with my mum, although I had a job to keep up with the regulars, fast as lightening with their bingo markers.

While we were at the caravan park then we thought we should broaden boyfriend’s horizons as much as possible. We made him play Dance Stage Megamix in the arcade, (creating in the process a video that I am never allowed to share), and we ventured out on Sunday night to sample the park’s entertainment. First on the agenda was bingo.

We arrived with only minutes to spare, adding to the excitement, and I quickly explained the rules. Belle was gutted that she wasn’t allowed to check off the numbers herself, (it is gambling after all), so I tasked her with just pointing at them, ready for me to mark off. If I’m honest this made the whole process a little more confusing, but hell, we were already pumped full of adrenalin, so barely noticed.

I could hardly bear it.

I had a split second of panic – what should I say? Bingo? House? I didn’t want to accidentally say the wrong thing and disqualify myself. What was the protocol? Every second counted though, as you have to declare your win before they call the next number, so I opted for making a random noise that sounded a bit like a duck trying to say ‘yes’ – a sort of aggressive, barky honk.

Whatever it was, it worked.

Another whole minute then of tension while the bingo assistant came over and called back my numbers, just to double check I hadn’t been getting over excited with the bingo marker, and then, finally, victory!

My hands were shaking slightly and my heart was pounding as I was presented with a money bag containing six whole pounds, the exact amount we had spent on three bingo cards and markers.

And thus was my boyfriend’s bingo virginity lost. 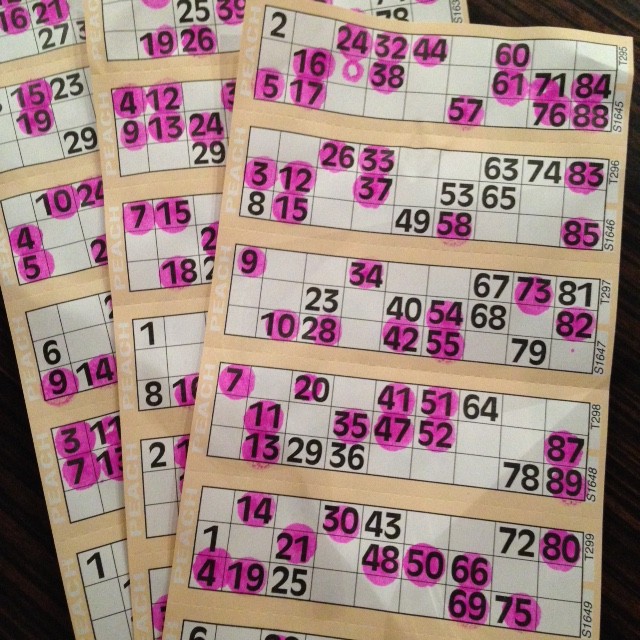