I have an alarm clock that wakes me up to the radio every morning. A while back I switched from being woken up by Radio 4 to letting the sounds of BBC Somerset drift into by subconscious instead. Listening to Radio 4 made me feel a little bit more important, but it made me miserable because everything in the news is so fucking sad.*

Seriously, pick up any newspaper or turn the TV on at 6pm (to something other than Eggheads) and you’d be forgiven for wondering why we don’t just set a massive nuclear explosion off in the centre of the earth and put us all out of our misery.

Take a look at the news today and you can see what I mean: 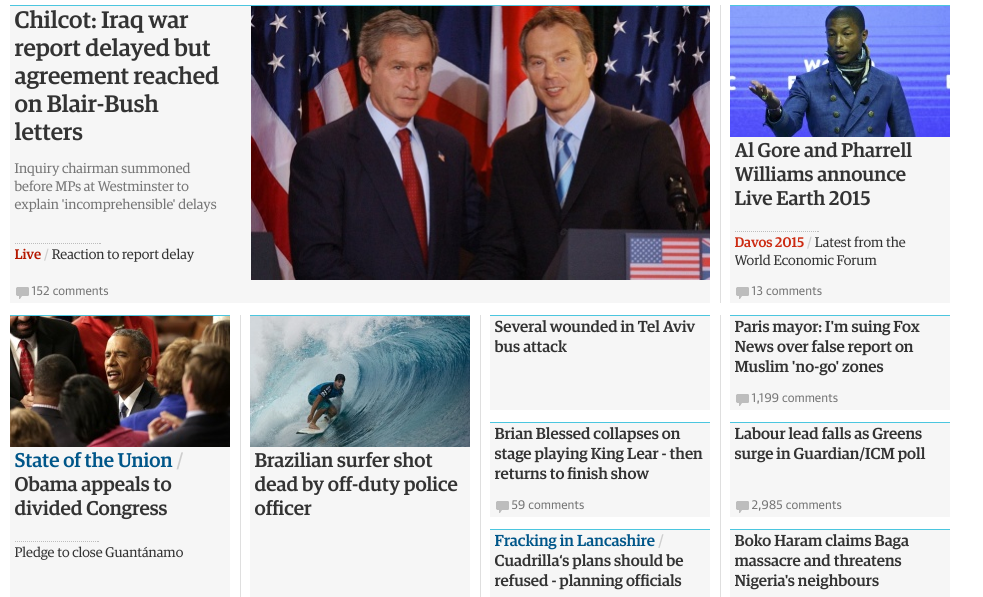 It’s shit. I mean well done to Brian Blessed and everything, but come on.

It’s death, war, destruction, crappy politics – is it any wonder the NHS is crumbling and GPs are overworked? We are all having to drink heavily and take prescription medications just to try and block out the hideous reality of life.

Except it isn’t hideous at all is it? It’s actually amazing, miraculous and beautiful, but for some reason that isn’t the stuff people want to read about. They want to know about disasters on a global scale when the really wonderful stuff is happening every day in your own town. Individual people are doing interesting and valuable things, changes other people’s lives, remaining positive in difficult circumstances, loving their friends and family and generally getting on with things.

Reading the news has actually been shown in numerous studies to be physically bad for us. This article gives multiple reasons for switching off, not least this:

“News is toxic to your body. It constantly triggers the limbic system. Panicky stories spur the release of cascades of glucocorticoid (cortisol). This deregulates your immune system and inhibits the release of growth hormones. In other words, your body finds itself in a state of chronic stress. High glucocorticoid levels cause impaired digestion, lack of growth (cell, hair, bone), nervousness and susceptibility to infections. The other potential side-effects include fear, aggression, tunnel-vision and desensitisation.”

Sounds pretty nasty doesn’t it? Personally I need all the hair growth I can get, I can’t afford to impair anything.

A university professor interviewed here says that “in addition to a burgeoning sense of helplessness, cognitive shortcuts triggered by the news can also lead us to gradually see the world as a darker and darker place, chipping away at certain optimistic tendencies.”

Is this what you want for yourself? A chipping away of your optimistic tendencies?? No thank you very much.

Now there will be a lot of people I’m sure who will think that my refusal to read the news is pure ignorance, that you can’t hope to bring about any sort of positive change without an international political and economic context, but I think that’s rubbish. Not reading the news isn’t about laziness, ignorance or apathy, it’s a very conscious decision to cultivate a more positive way of thinking and not have my head filled with horror that I am helpless to do anything about.

Some people may worry that ignoring the news means you don’t care or that you’ll cease to be an active member of society, but as my professor explains, the opposite can actually be true as constant exposure to bad news stories only increases feelings of hopelessness:

“When I’ve done studies and people watch coverage of, say, 9/11, they don’t then meet criteria for depression in the DSM,” she said. “But if you ask them how they feel about the world, what they end up with is this malaise: ‘Everything’s kinda bad’ and ‘Why should I vote? It’s not gonna help’ and ‘I could donate money, but there’s just gonna be another kid who’s starving next week.’”

I may not know who the president of some far flung country is, but that doesn’t stop me helping out a friend in need does it? An ignorance of the latest oil crisis doesn’t prevent me from holding a door open for a mum with a pushchair or giving money to someone on the street or generally being a nice person and doing little things that make other’s people’s lives a little bit better, if only for a minute.

They say that no news is good news, and I’m sticking with that.

How do you feel about the news?

*Sorry Daddy for the bad language but it really is very sad.