I love a good fad.

Some days I decide that soup is going to be my new thing and I drop everything to rush to the kitchen and chop some limp vegetables. Other times I vow that I’m going to start journalling every day and I buy a new notebook. I write my first entry – ‘So hello and welcome to my diary!’ – and then I find six months has passed and I have to write another entry apologising for the intermission.

(I don’t know why I do this in diaries, but I do always write with half a mind to someone else reading it. I like to set the scene. Heaven forbid anyone actually did.)

I started this month (vaguely) determined to complete a dry January, but I think that was mainly because I had drunk so much in December that I felt slightly queasy at the thought of even just a small sherry. Suffice to say it didn’t last. I’ve only had a couple of glasses of wine on a couple of social occasions, so I’m not exactly rolling in the gutter, but it demonstrates nicely my usual lack of willpower.

Today however is day five of my involvement in the Halfords #31FitterDays challenge. The challenge involves a different exercise every day and there is a plan for beginners and those with a little more experience, so you really have no excuse. I’ve been using my new  Garmin Vivofit as part of the challenge to help me track the number of steps I take and generally give me a bit of focus and motivation. (I know it’s the 12th already, but there was a bit of a delay in the arrival of the Vivofit and everyone knows you can’t throw yourself properly into a new fad without the right equipment.)

Look what I did yesterday! BOOM! I had actually done a few hundred more by the time I went to bed but I was so excited to have reached five figures. 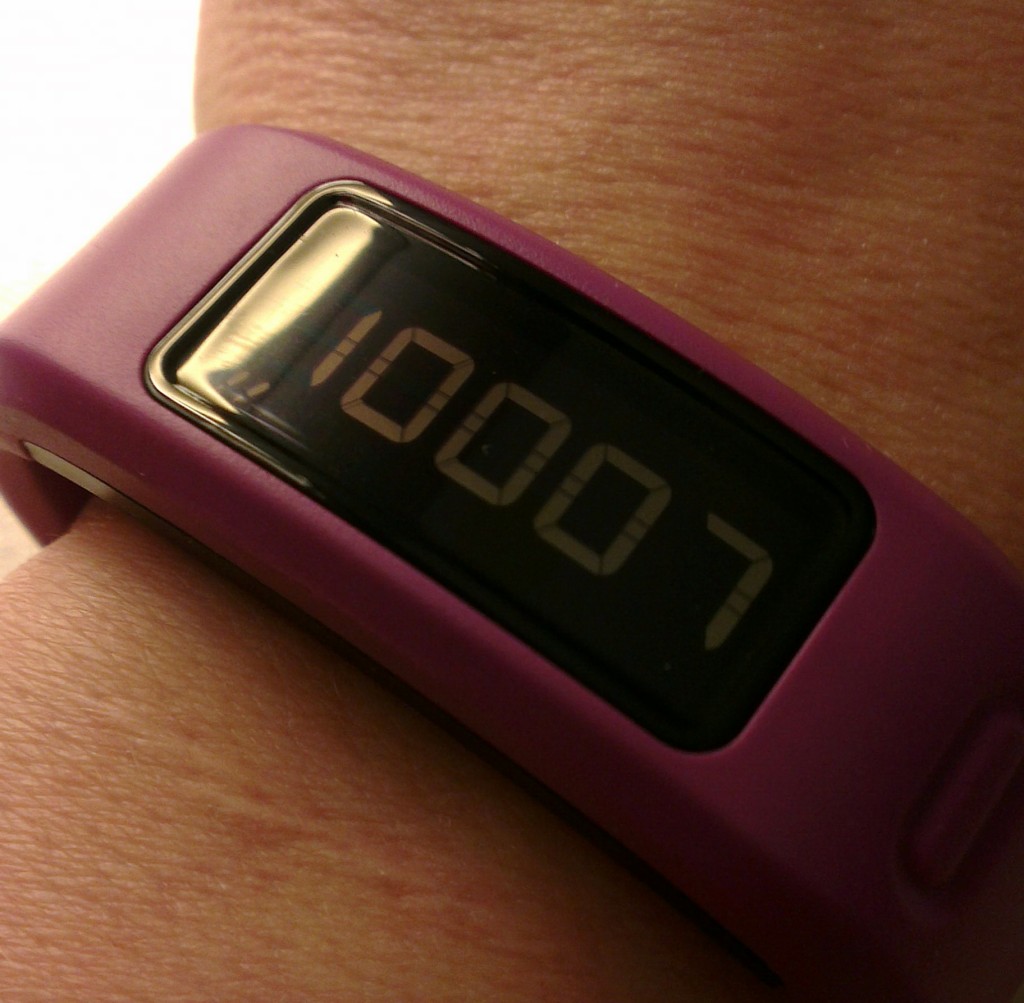 I’ve had pedometers before but I really like the wristband style of the Vivofit as it’s really easy to wear and just looks like a funky watch. The downside to it looking like a watch is that people you’re with assume they must be terribly dull as you look like you keep checking the time.

The band tracks how many steps you have taken against your daily goal, calculates this as an approximate distance and tells you roughly how many calories you have burnt in total during the day based on your weight, height and number of steps. N.B. This is total calories, not just the ones from the steps, so don’t get excited and think you’re clear to eat a Snickers every couple of thousand of steps.

According to the Vivofit I have done 34,000 steps in my first four days, equating to a distance of over 14 miles. I’m pretty pleased with this as it just goes to show what you can do with just a tiny amount of effort. I’ve not been deliberately going out for long walks or anything, but knowing I’m in competition, if only with myself essentially, gives me that extra push to walk when I might drive. I’ve also done a reasonable amount of jogging on the spot when I’ve felt I needed a boost.

Although you wouldn’t think that just walking would make much difference to your fitness I can honestly say that I feel a tiny bit different already. It’s a subtle thing – apart from the aching in my calves – but it’s noticeable. Yesterday, day four, I had less of an urge to stuff my face with sweeties and although I am still working my way through the Christmas treats I was definitely more moderate in my gorging. It feels like undoing all the effort you know you’ve made during the day to just sit down and pig out; it was much more about not wanting to eat crap rather than just feeling like I shouldn’t.

The Vivofit also tracks your sleep, so you can keep it on all night and see how much you moved about. I’m not sure that just knowing how much you moved is necessarily an effective indication of sleep quality as I know I can be a bit of a fidget, but it does help you see how much sleep you are getting and enable you to compare trends over time.

You can keep track of everything by syncing your Vivofit to your phone or computer and this is the one area so far that I have struggled with; the app doesn’t seem to be compatible with android so doesn’t work on my HTC phone or my Chromebook. I’ve had to dig out an old Windows laptop to set it up on, which is a little frustrating. It means I don’t get to sync as often as I otherwise might, so I’m hoping the band itself keeps the data stored for a while! Most people though wouldn’t be so Android-centric, so this wouldn’t be a problem.

Apart from that I am loving my new device and exercise routine and am determined for it to last longer than my dry(ish) January. Perhaps if I do it carefully then lifting a glass of wine to my mouth will register as a step…

Do you have any fitness related goals this year?