I logged on this week and this is what I saw: 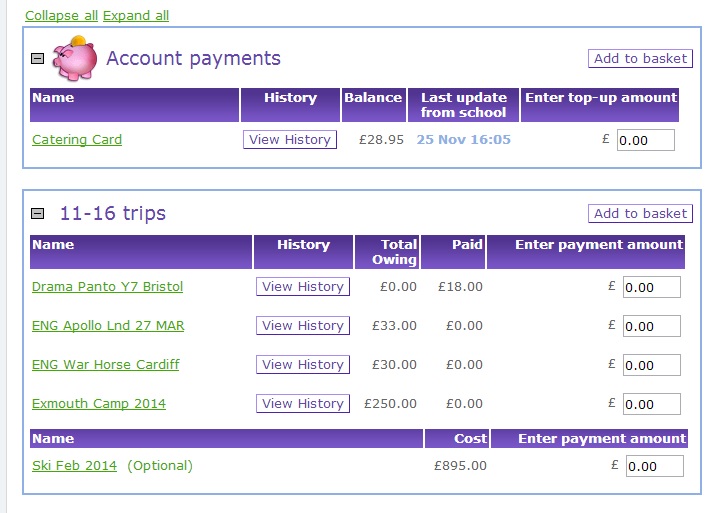 So first up, are the lunches. Belle tends to take a packed lunch about half the time and have a school dinner on the days when I can’t be bothered to get out of bed/don’t want to have a cook a meal in the evening/have forgotten to buy bread. Obviously when she does have a cooked dinner though, she chooses the one thing that I could make at home and that costs about three pence to produce – pasta.

Value for money there then.

Then we’ve got the panto. Sure, that’s all fun and japes, but in what way is going to watch Louie Spence in Cinderalla educational? It’s not exactly what I would call curriculum enhancing.

Then they are going to London to watch The Curious Incident of the Dog in the Night Time. I feel I might have bought this one upon myself to be honest. If I hadn’t gone on that Arvon course with Mark Haddon and developed that teeny tiny crush then I might never have persuaded Belle to read the book. She then wouldn’t have suggested it to her English teacher as a play to study, and then the trip would never have happened. Sorry other parents, my over-active hormones take the blame.

And then just in case two trips to the theatre weren’t quite enough for their tiny middle-class brains, they are off to Cardiff to watch War Horse.

Finally I have to fork out £250 for school camp. This I mind slightly less as it means Belle is away for five days and four nights and any parent will tell you that this is awesome. £250 still seems a bit steep though. In my day school camp meant sheltering from the rain in badly put up tents, falling in rivers and eating undercooked sausages that tasted of meths. Nowadays it’s all carefully planned fun –  deliberately wading through muddy streams in a bid to expose our children to a little bit of the outdoors, then rushing back to a cosy log cabin to check for snapchat messages.

I can pay this one in instalments, but £60 is needed by next week, along with all of the other trip money. Just before Christmas. Super. Who’s genius idea was that?

Don’t even get me started on the ‘optional ski trip’. We had a letter about this before Belle even started going to the school. £895?? Who on earth has an optional £895 lying around to send an 11 year old off skiing? For £895 I would expect her to be taken into the care of kindly nuns for at least a month, but this trip is five days!!

Bear in mind too that all of this is on top of the million pounds* I spent in September on school uniform. The trouble with going to a ‘good’ school apparently, (or perhaps just a school that isn’t in Bridgwater), is that they are very particular about uniform. Skirts and shirts I could get away with buying at Asda, but the rest is regulation stuff, available only from one of those scary uniform shops that always seems to be staffed by a scowling old lady. Belle’s kit list included a blazer, jumper, skort,** PE t-shirt and sweatshirt complete with school logo, and school coloured rugby socks. Then there’s the school shoes, trainers and coat. And next term she is going to need football boots.

What is this, Eton? I half expected a straw boater and bow tie to be on the list.

I had better stop ranting and do some work so I can afford it all.

(P.S. When Belle does woodwork next term, she has to take in her own wood. I’m not even joking.)

**Not a typo, actually a thing.