How many loyalty cards do you have in your purse? I actually had to buy a separate card holder to keep them in, so full was my purse becoming with little rectangles of card and plastic. Unfortunately what happens now is that I will pop out with my purse, leave all the other cards behind, and so not be able to get a stamp on my ‘buy 173 cups of tea and get a hobnob free’ card anyway.

Much more manageable for me are online loyalty and reward schemes that do all the hard work for you. Whenever I order from The Book People for example, points just get automatically added to my account, without the need for me to carry a two tonne handbag around with me everywhere I go. I was happy then to have a look at epoints, and to share my thoughts.

Signing up to epoints was refreshingly easy. I get quite annoyed with websites where they want to know every single thing about you, so it was nice not to have to spend hours completing forms about my marital status, favourite colour and sandwich of choice. As soon as I was registered I was immediately given a few ideas for ways to start collecting points:

Now before you get too excited, you can’t just log on, like them on Facebook and start claiming an iPad or anything. Looking at the number of points you need to claim various items I would say that 100 points is very roughly worth a pound but pricing did seem to vary – you can get the new hardback David Walliams book for 1260 points for example, but then I also found a bottle of Lynx shower gel for 638! If nothing else it shows that there is scope for a bargain if you take your time to browse.

As well as just shopping you can also earn epoints by doing things like commenting on articles or liking a brand’s Facebook page. For a social media floosie like me this is ideal.

I decided to try a little experiment to see how easy it was to collect points.

I earned 20 points straight away by completing my profile and liking epoints on Facebook. I tried to claim points for following them on Twitter but although it recognised that I was actually already following, it didn’t seem to think that counted. I then had a look at some of the other options, and registered at a site called Best For Film with the promise of 50 points. I also liked them on Twitter and Facebook. None of these points were showing up twenty minutes later though, so I’m not sure exactly how that works. I couldn’t find any other social channels to like, but I guess that as the site grows this functionality will too.

The epoints website has a directory of over 2000 online stores for you to search through and many will have double, triple or even quadruple points on offer. Getting 3% back on anything you spend at John Lewis or Marks and Spencer feels like a pretty good deal for doing nothing. My only concern is that I would forget to go via epoints in the first place and would end up kicking myself every time I shopped online. An app or widget of some sort that you could add to your browser bar would be useful – something that automatically lets you know if the site you are on has epoints available. 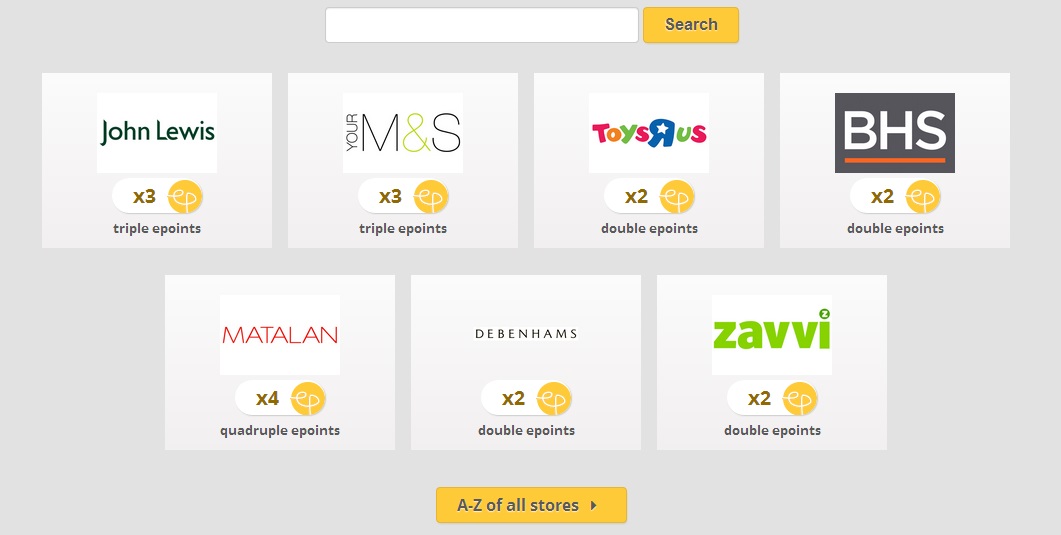 I needed to buy a few things from Boots so looked them up and found out that I could earn 1 epoints for every pound I spent. I clicked through to the Boots website and did my shopping as normal. Nothing showed up in my account or as pending immediately afterwards, which I guess is to be expected. Epoints say that points remain pending until your purchase is confirmed by the retailer, which can take up to 30 days. Let’s hope my Boots points pop up in my pending total soon.

In the meantime I decided to have a go at the fun part – the buying. Epoints had credited my account with 1000 points so that I could test out the system so along with the points I had earned already I had 1081 to spend. Epoints say they have over 11 million rewards available at the moment and you can search by category, points, or just do a straight search for a particular item. You can also choose to search for items within your exact points total, and then narrow down by category.

I have been going through a bit of a Sherlock Holmes phase lately, so I chose A Study In Scarlett for 1016 points. 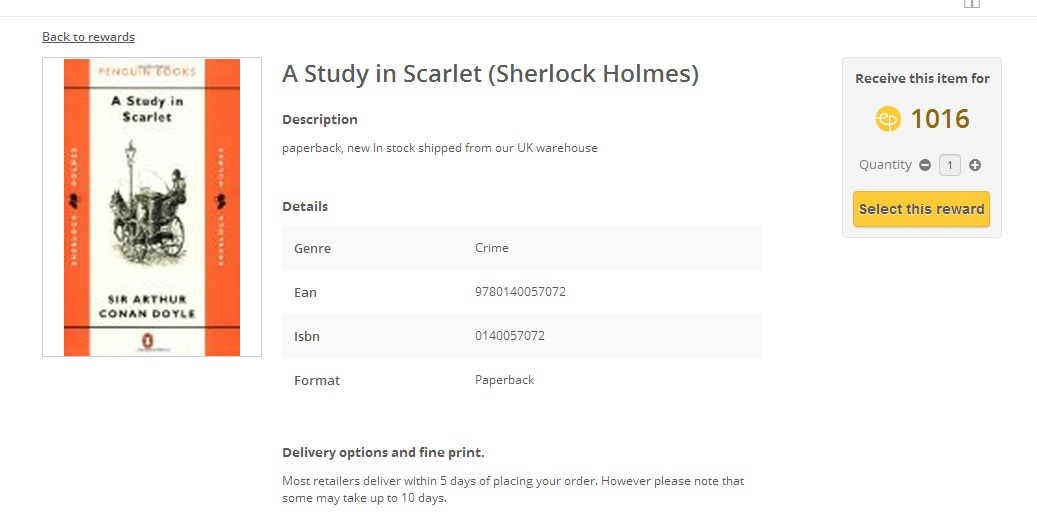 Before I confirmed my order I was told that delivery would most likely be within five days, but could take up to ten. Because I had already entered by address details to earn extra points earlier, checking out took about five seconds and was simply a couple of clicks. Now all I have to do is sit back and wait for my book to arrive.

Shopping as a reward for shopping – what’s not to love?