Mortgages are apparently at their most affordable level in 14 years. This could be good news for me as it was around 14 years ago that my Gran offered to lend me the money for a deposit for a house and I said ‘Nah, that’s alright, I’ve got loads of time to worry about things like that.’

A couple of years later and the rented house I was living in had doubled in value and it appeared that I had missed the property boat for good.

(I doubt I could even afford a boat.)

Starting my family young has made it even harder to get on the ladder as I don’t have the option to begin on the bottom rung. My children have shared a room before, but they were both under ten – I’m not sure it’s quite as fun at 11 and 18. To be honest I’m not sure it was terribly fun for Bee even at nine.

So, could there be a light at the end of my chucking-money-away-every-month-on-rent tunnel? I thought I should investigate.

There seem to be three elements to a mortgage. The first is how much can you borrow? This is based on your income, and you can get an idea of this using a tool like Tesco’s mortgage calculator.

This part went relatively well – between us Boyfriend and I have a decent enough income, and we could probably afford to borrow enough for a house, so long as we didn’t mind moving out of the city a bit. Unfortunately, I do mind moving out of the city a bit. This could be a pretty big stumbling block, but let’s focus on the mortgage for now. I also chose to brush over the fact that I am self-employed, as I’m not sure how this impacts an application.

The second thing to consider are the repayments. Again, this wouldn’t be a problem. We currently pay over £1,000 a month in rent for a normal size 3-bedroom house in Bristol, and the same repayments on a mortgage over 25 years would equate to borrowing around £200,000.

The third step though is the tricky bit. A deposit. I have checked the jar we keep on top of the fridge and it has around £11.26 in it. Based on this as a 10% deposit, we could afford to spend around £110. This is not ideal. 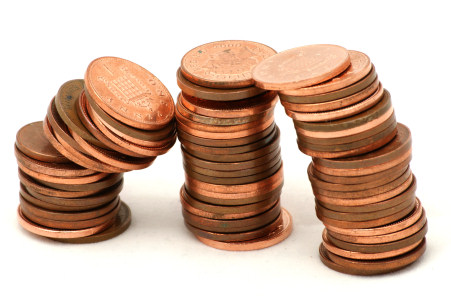 Step three I imagine is the sticking point for many families and can become a horrible vicious circle. You could afford the repayments, you could get the mortgage, but because you’re paying out so much in rent every month you simply can’t afford to save. Once you have children, moving back in with your parents for a year or so isn’t really an option, and because of the size of house you need you can’t start small. Without wealthy parents or a substantial inheritance on the horizon, how are normal families meant to ever be able to afford to buy a house?

Looks like I had better keep adding to that penny jar.

Do you rent or buy your house? If you were buying for the first time now, would you be able to afford it?