I was reading the latest copy of Psychologies magazine over the weekend. It’s one of the only women’s magazines I can tolerate because it actually includes features other than the eight secret ways to give the best blow job ever, top tips to drop a dress size in a week and six sexy shoe styles you can’t live without.

(These are obviously the only things we care about as women after all – how to impress men and other women.)

This month one of their features really got me thinking, although perhaps not in the way I was meant to. I think I was supposed to read the conversation between Kim Cattrall and Janet Street Porter and think ‘gosh, what two fantastically funny and self-assured women’. Instead I thought ‘bloody hell, so these women think of no one but themselves?’

The ‘conversation’ as far as I could see could easily have been split into two separate monologues. It read simply as each woman taking it in turns to say something about themselves, and I’m pretty sure you could have rearranged the paragraphs in any order you wanted and it would have made as much sense. Hardly ever did it feel like either woman was actually listening to what the other was saying, they weren’t asking questions, they were merely biding their time until it was their turn to speak again. It’s all ‘I want this…’ and ‘I find that…’ – no ‘so what do you feel about…?’

I have scanned a little bit of it here for you so you can see what you mean. Try reading each woman’s chunks on their own – it doesn’t even feel like the other peron’s input is missing does it? 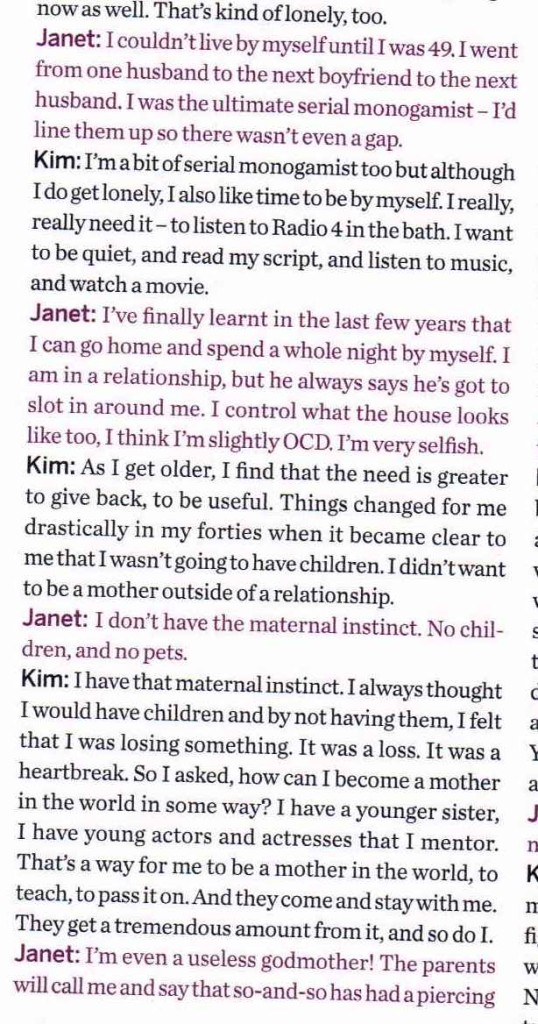 It got me thinking though about whether or not that’s typical of the conversations we have with friends every day. Are we really listening? Do we ask questions to find out more about how the other person feels or are we simply waiting for our turn to speak?

A few years ago when I trained as a breastfeeding counsellor I remember one of the hardest things to master was the art of listening. When someone is telling you about something that is happening to them instinct is to think of something similar that has happened to us and simply offer that as a response. It’s much harder to bite your tongue and just listen.

Even having the benefit of that training I still often catch myself falling into that trap – I hear someone say something that triggers a memory of my own and suddenly I switch off. I’m not listening to them any more because already I’m planning what I want to say and waiting for them to pause so I can jump in.

How good a listener do you think you are?