If I had a pound for every time I had used the word ‘amazing’ today I would be a rich woman, especially by Ethiopian standards. I actually used it twice in a tweet earlier today, which isn’t very clever, but the people I have met today really are amazing, so I make no excuses for the word.*

Today we went to visit an amazing** food project that has been supported by World Vision. The project is made up of around half a dozen women, all of whom were facing significant challenges when they started the group four years ago, including living with HIV and struggling as single parents to provide for their children on their own. One thing they shared though was ambition – a determination to makes their lives better.

The group were supported by World Vision and by the Ethiopian government to set up a business making the Ethiopian staple, injera. They wanted to do something that would provide an income for their families for years to come, a sustainable business that they could then grow into something much bigger as in turn their confidence and experience grew.

World Vision supported the group in two ways. Firstly they provided them with equipment and a small shop premises. One injera hotplate costs around 700 birr – totally put of the reach of most Ethiopian women starting up on their own, but the equivalent of only about £25. I don’t think I will ever be able to spend £25 again on something as frivolous as a ir of shoes now I’ve seen the difference such a small amount of money can make.

More importantly though, World Vision provided training, equipping the group of ambitious women with basic business skills. This type of support is priceless. Not only does it empower the initial group, but skills and knowledge can then be passed on to other women in the community, indirectly supporting many other families.

Enough of the background though. This isn’t about facts and figures, this is about real women.

Lemlem is the leader of the group, a sort of project manager if you will. Lemlem’s husband died unexpectedly 14 years ago, and after his death she struggled to make ends meet and to provide for her two children. Five years ago, after a period of illness, she discovered she was HIV positive, and it was the following year that she became involved in the project. 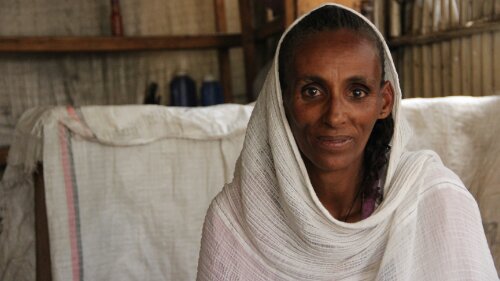 So succesful have they been that Lemlem is now able to pay for one of her children to go to private school, and she supports the other one financially while he attends university, sending him money for food. (We’re not really that different to mums in Ethiopia are we?)

Lemlem sits very still, her hands in her lap, while we ask her questions about how her life has changed since becoming in the injera project. She is softly spoken, but has a powerful presence – it is obvious that she is a woman with a wonderful strength of character.

I ask her how important it is to be a good role model for her children, for them to see her being ambitious for the future. “Anyone who is strong enough to work,” she says, “and is committed can change anything.”

They may currently be working for a small shack, but her dream is to grow the business and begin exporting to other countries, perhaps even the UK. Aiming high is clearly the name of the game.

Letay, a single mum of three, definitely couldn’t be described as softly spoken. Letay is the sassy one of the group, with a sharp sense of humour. Before we even begin our own attempts at injera making she is laughing, although it transpires that her friendly mocking is more than justified. You’d think that pouring a bit of batter onto a hot plate would be easy. It is not.

The aim is produce a smooth, thin injera, that cooks through evenly. I try to pretend the holes in mine are intentional, but I’m not sure Letay is convinced. “Good, good! Very good!” she says, but there is a twinkle in her eye. 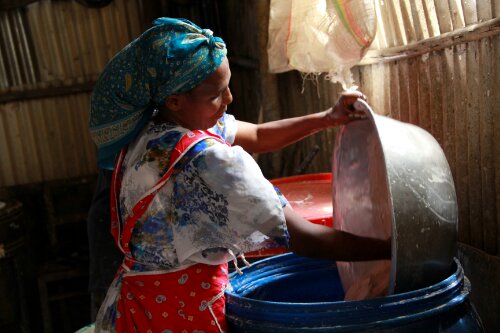 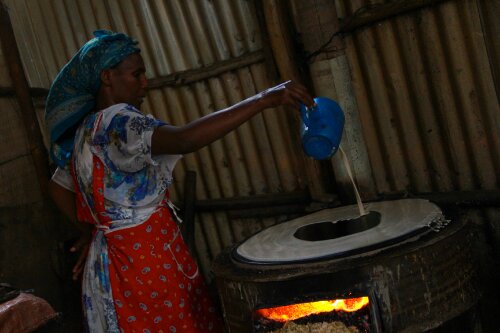 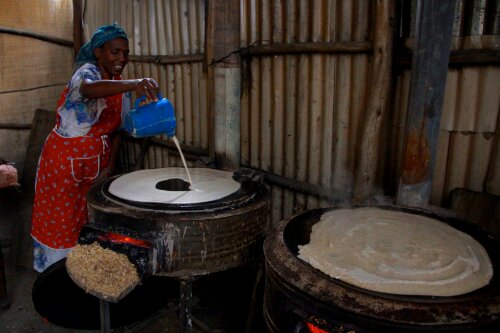 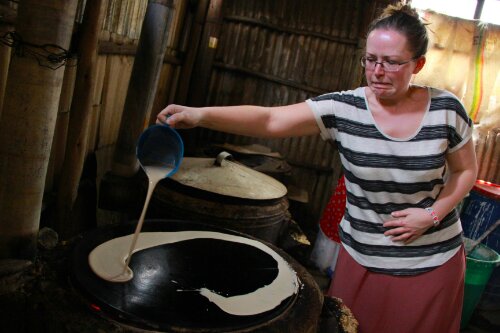 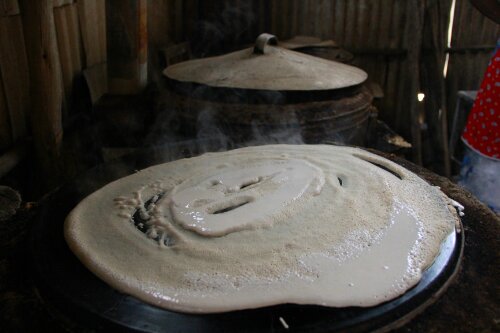 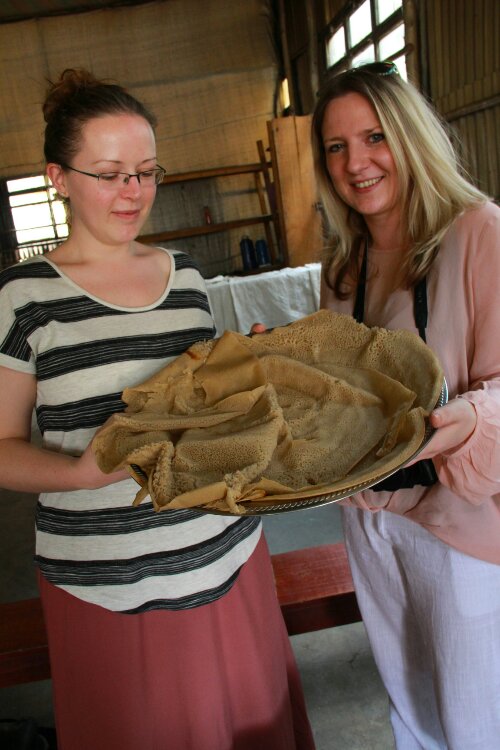 These women have high hopes for the future. What are your dreams and ambitions?

*Perhaps you could turn this post into some sort of drinking game where you take a swig of Ethiopian wine (not recommended) every time I say it?