This weekend I took a train up to Bristol to make some tapas. It might feel like quite a way to go when I have a perfectly good kitchen at home, but this was a special event being hosted by Jet2 Holidays to promote the fact that they are expanding their range of flights from Bristol airport. Plus I was promised free wine. I’ll go a long way for free wine.

The event was a tapas cooking class at Little Kitchen, which is a really lovely space in Totterdown, within walking distance of the station. They do a lot of private events, but loads of open cookery classes too, so if you like trying new things then definitely have a look. I’m seriously considering a scotch egg masterclass. 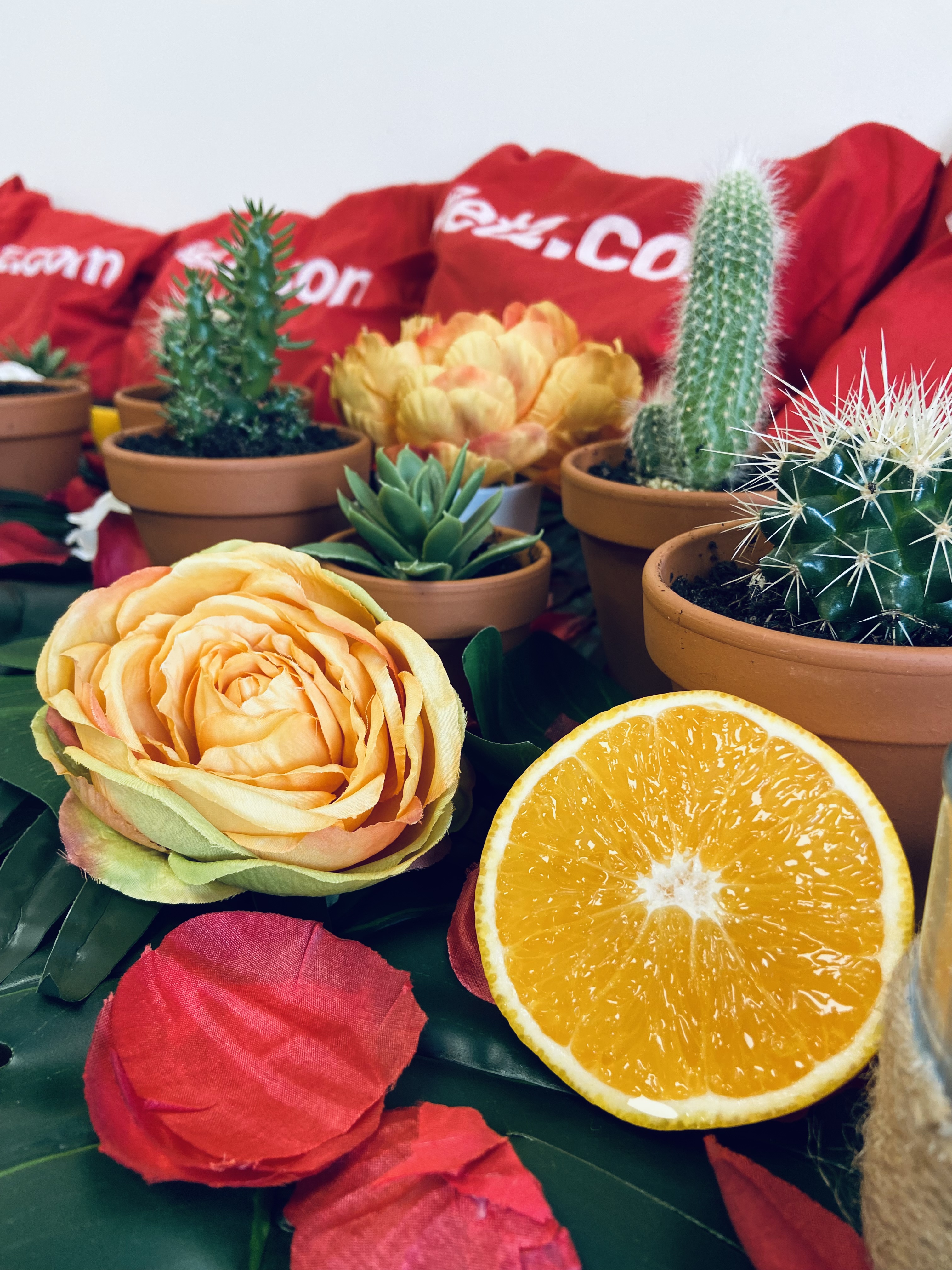 The aim of our cookery lesson was to recreate some of the Jet2 Holidays winter sun vibe that you would normally get by flying off to the Canary Islands. I have never been to the Canary Islands or had a winter sun holiday or even been on any kind of package holiday at all. I’m not sure why exactly – I guess money, as a young, single parent, and possibly just never having done it before, not being sure how it would work with kids on my own? That said, a week in a caravan in Cornwall is probably MORE expensive nowadays.

Lately though, now that Belle is older and I don’t have ‘children’ anymore, I’ve quite often found myself browsing package holiday sites like Jet2 Holidays and imagining how wonderful it might actually be to just lie in the sun and drink cocktails and not have to pack all the self-catering paraphernalia like tea towels and tea bags. Does any holiday ever feel like a real break when you have to pack tea towels??

There I am then, browsing the all inclusives, and into my inbox drops this event invitation, with the promise of wine and cooking and a quiz, where the winner would get a Canary Islands mini-break. Food, drink and competition – all of my favourite things.

The universe had provided. I had to say yes. 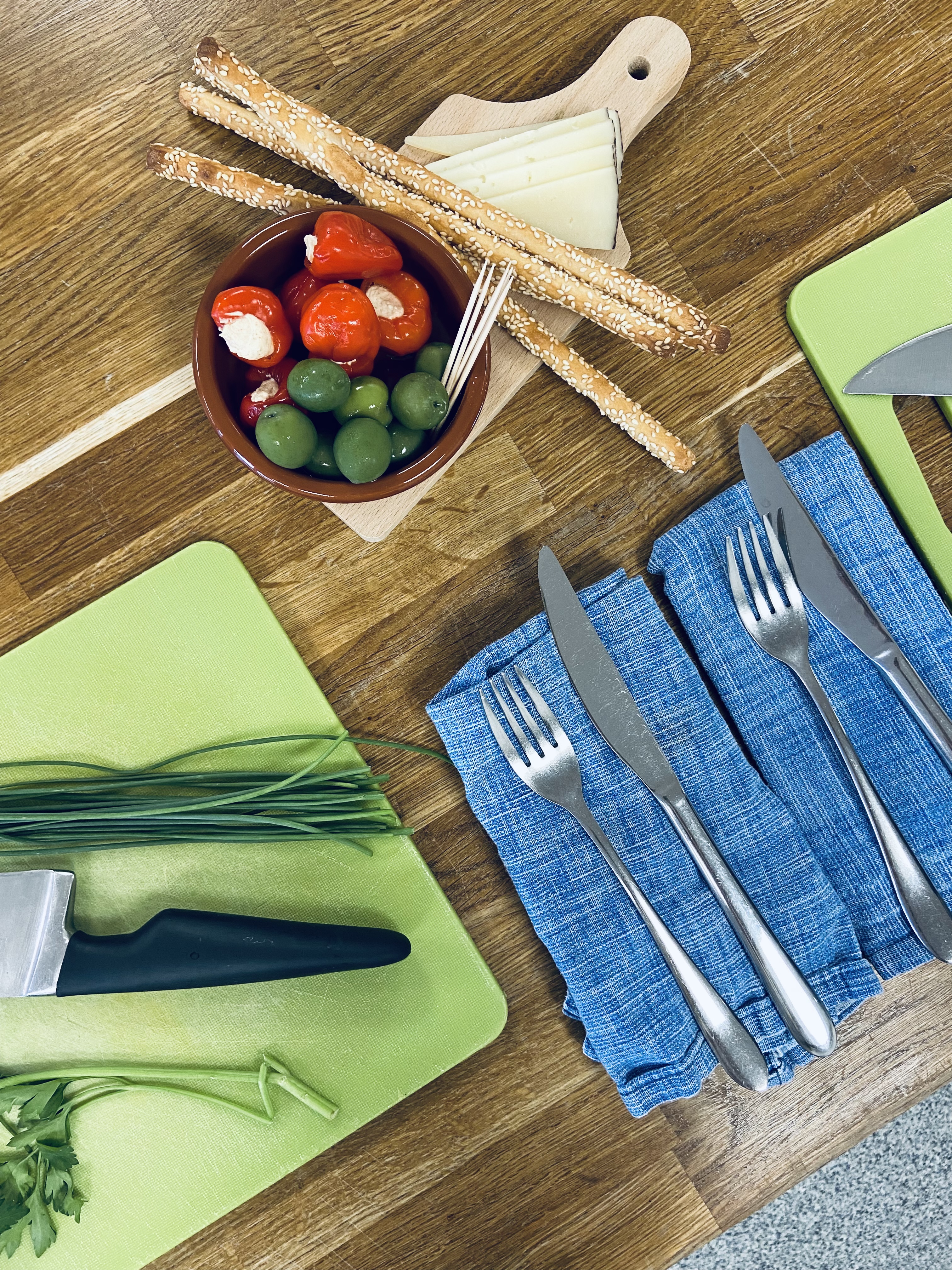 I was greeted on arrival by David from Jet2 Holidays, proffering a bottle of wine from Lanzarote, which is a lovely start to any event in my eyes. You’d be forgiven for being a little sceptical about how Lanzarote even makes wine as it has such an unusual volcanic landscape, with very little in the way of vegetation, but thanks to a complex system of deep hollows and protective dry stone walling, winemakers are able to tap into the nutrient rich soil locked beneath the lava and volcanic ash and produce wine that is actually rather delicious.

So delicious that I was basically obliged to drink at least four glasses. Plus everyone knows that anything you drink at the same time as cooking doesn’t count. 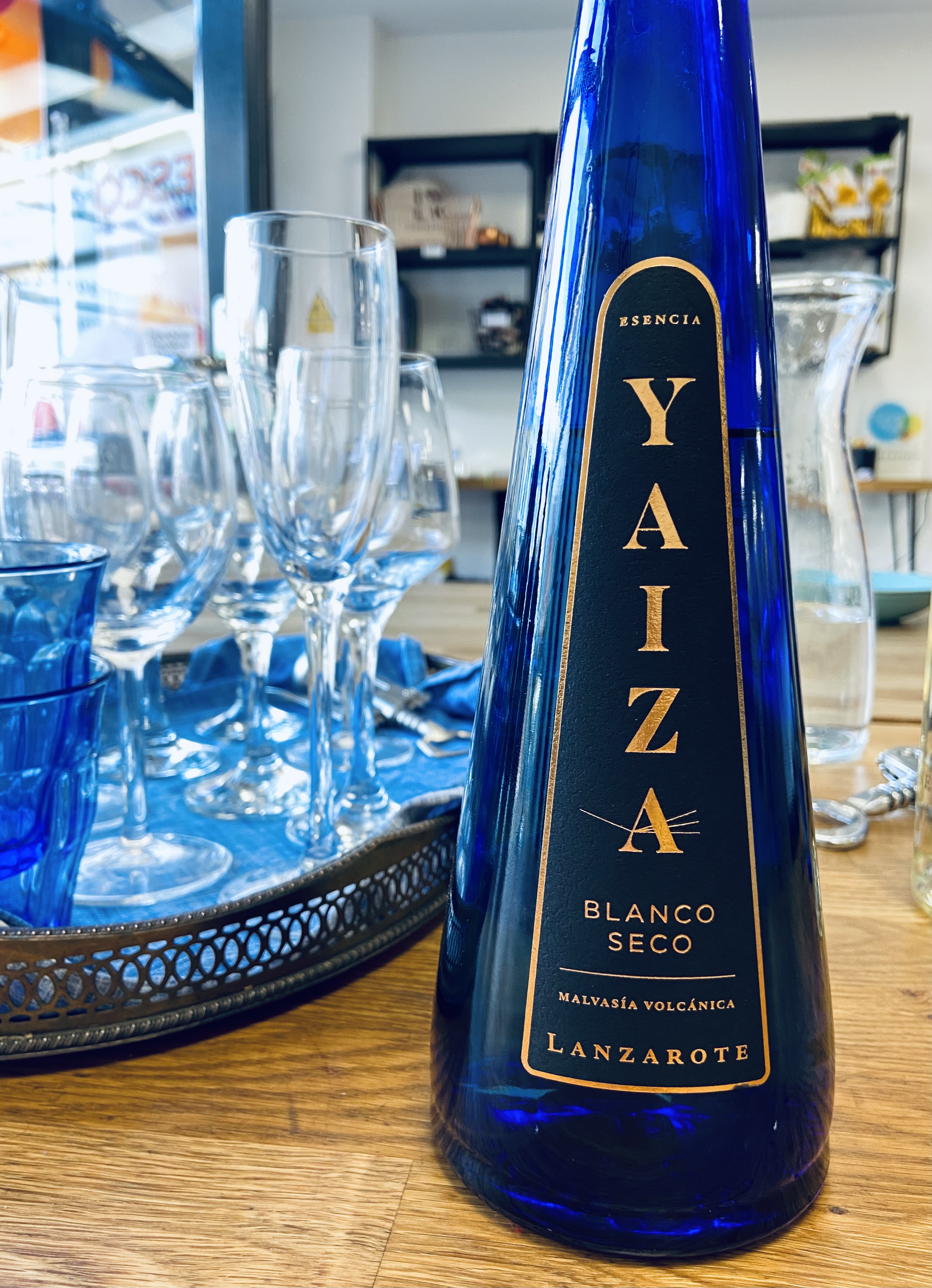 The cooking was a lot of fun, and we made all kinds of tapas that I’d never tried before, let alone made myself.

I love that when you do a cookery class – you try things that feel like they’d be too difficult, or not worth the effort, but they always are. Like cheese and leek croquetas – who knew that you could basically deep fry balls of white sauce?? Totally worth every minute of effort for those. 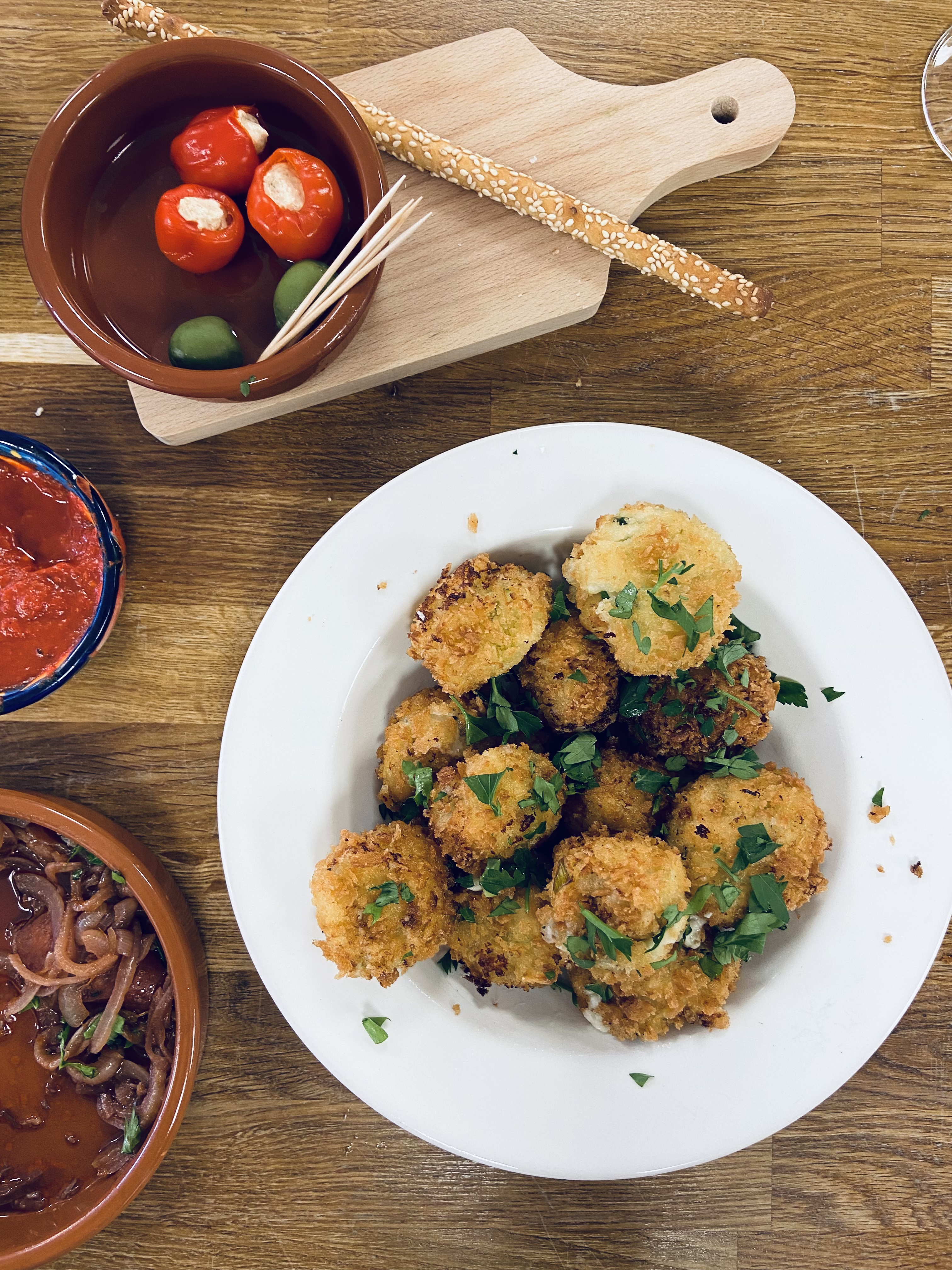 As much as I enjoyed the cooking, I was getting slightly nervous as the afternoon wore on, as I had done a ‘me’ amount of swotting for the quiz (i.e. a lot) but the free wine was loosening facts from my brain at a noticeable pace. I was trying to be nonchalant, like I wasn’t even fussed about winning and it was the taking part that I was looking forward to, but I think we all know that was a big fat lie.

Preparing for the quiz had been very interesting. I’m not sure I’d have been able to even name the Canary Islands beforehand, and I didn’t realise they were all formed from volcanoes, or that the bird was named after them at not the other way around. I didn’t know that they contain four of Spain’s national parks or that the closest mainline country is Morocco. (She says, showing off.)

They look absolutely stunning too. I only really know islands like Lanzarote from the 80s and early 90s when there was the package holiday boom and everyone called it Lanzagrotty, but all of the photos I looked at were just beautiful and I felt a bit silly for not realising sooner. A bit like the time I said to Bee, as if I was the first person ever to think of it, ‘wouldn’t it be nice to go somewhere with a beach, where you could just lie in the sun and have a little swim now and again and eat nice food?’ and she said ‘THAT’S A BEACH HOLIDAY MUM, it’s what everyone wants.’

I just needed to win the quiz and that dream would be me.

I had another glass of Lanzarote wine to steady my nerves.

If you are thinking of visiting the Canary Islands next year then it’s worth noting that Jet2 Holidays are going to be running lots of new flights from Bristol soon. We always fly from Bristol when we can as it’s such a good airport – the right mix of being big enough to have a lot of routes and not be too pricey, but also it’s super easy to get to, parking is really straightforward and the airport itself isn’t so big as to be overwhelming. Belle has flown from there on her own before as a mid-teenager and managed it very well.

The time had come for the quiz.

I tried to play it cool, but failed spectacularly. Every time people seemed stuck and David from Jet2 asked if we wanted a clue I would shout ‘NO!’ and cover my answers with a tea towel. (Turns out they do come in handy even in a package holiday scenario.) It was a very clear flashback to being at school and a reminder of why I had so few friends but such good GCSE results.

There were a few questions I wasn’t sure about, but I nailed the map labelling, and was feeling quietly confident until I swapped with Michelle, my cookery partner, and we marked the first round. I got 9/12 compared to her 11/12 and my Tenerife based fantasies started to fade. I internally practised my ‘congratulations!’ face and asked David if I would be allowed a holiday anyway for being really square about the whole thing.

We turned the page to mark round two. I got the map completely right, Michelle muddled two of her islands. We drew neck and neck. I held my own in the flags and pulled away with the picture round – I’d taken the lead! If I could just beat every single other person in the room…

David checked the marks. I casually nibbled some manchego in an effort not to appear bothered either way.

‘And the winner is,’ said David, not actually pausing, even though it felt like it in my head, ‘Jo!’

Huzzah!! I tried, (and failed), to look humble, but was of course extremely pleased, mostly for Belle who had put not inconsiderable effort into testing me in the car the day before in her special quizmaster voice. Between us we’d nailed it! At this point the holiday bit was almost irrelevant – the thrill I get from simply winning a test was enough. But also we get to go to Tenerife. 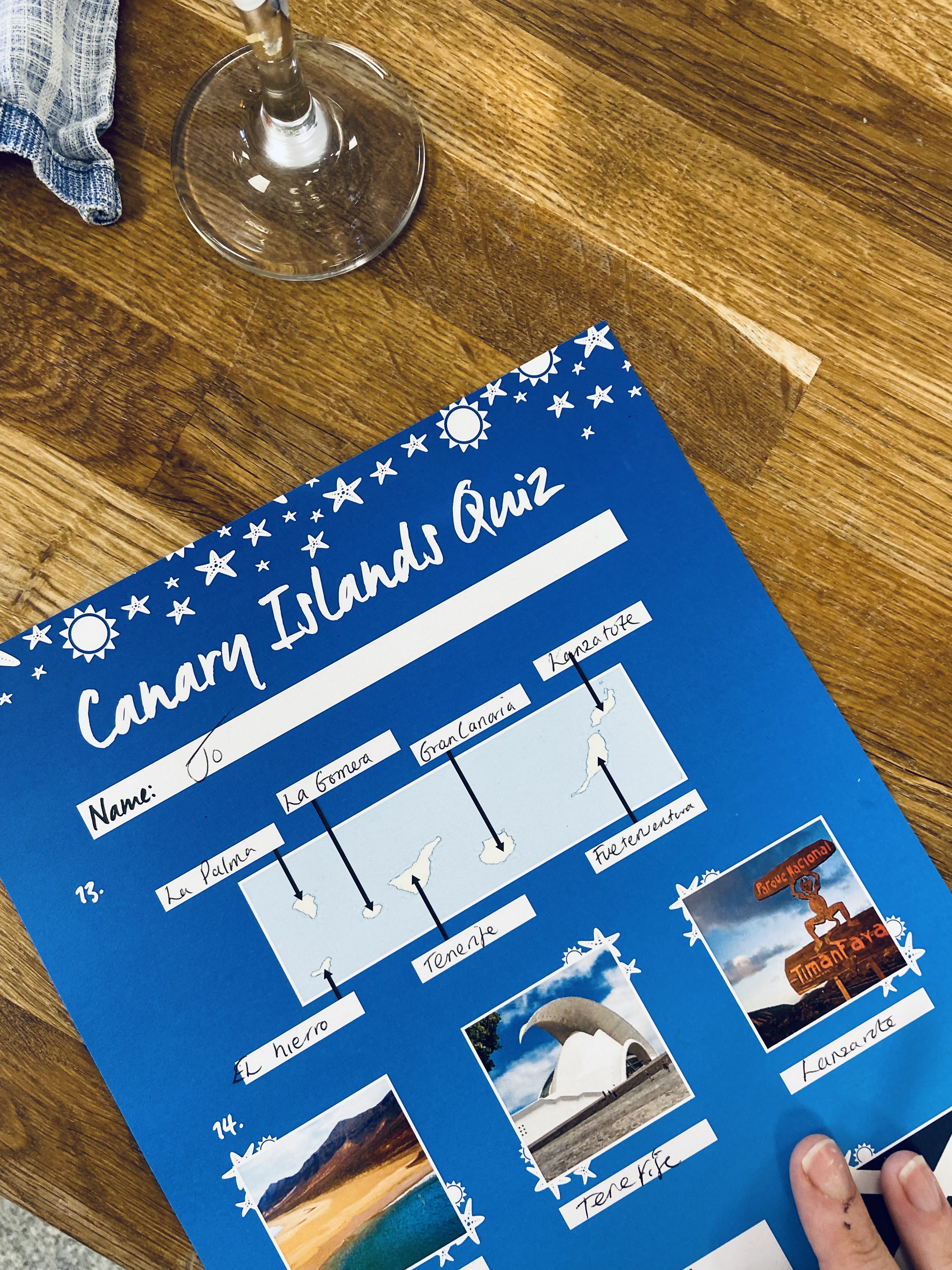