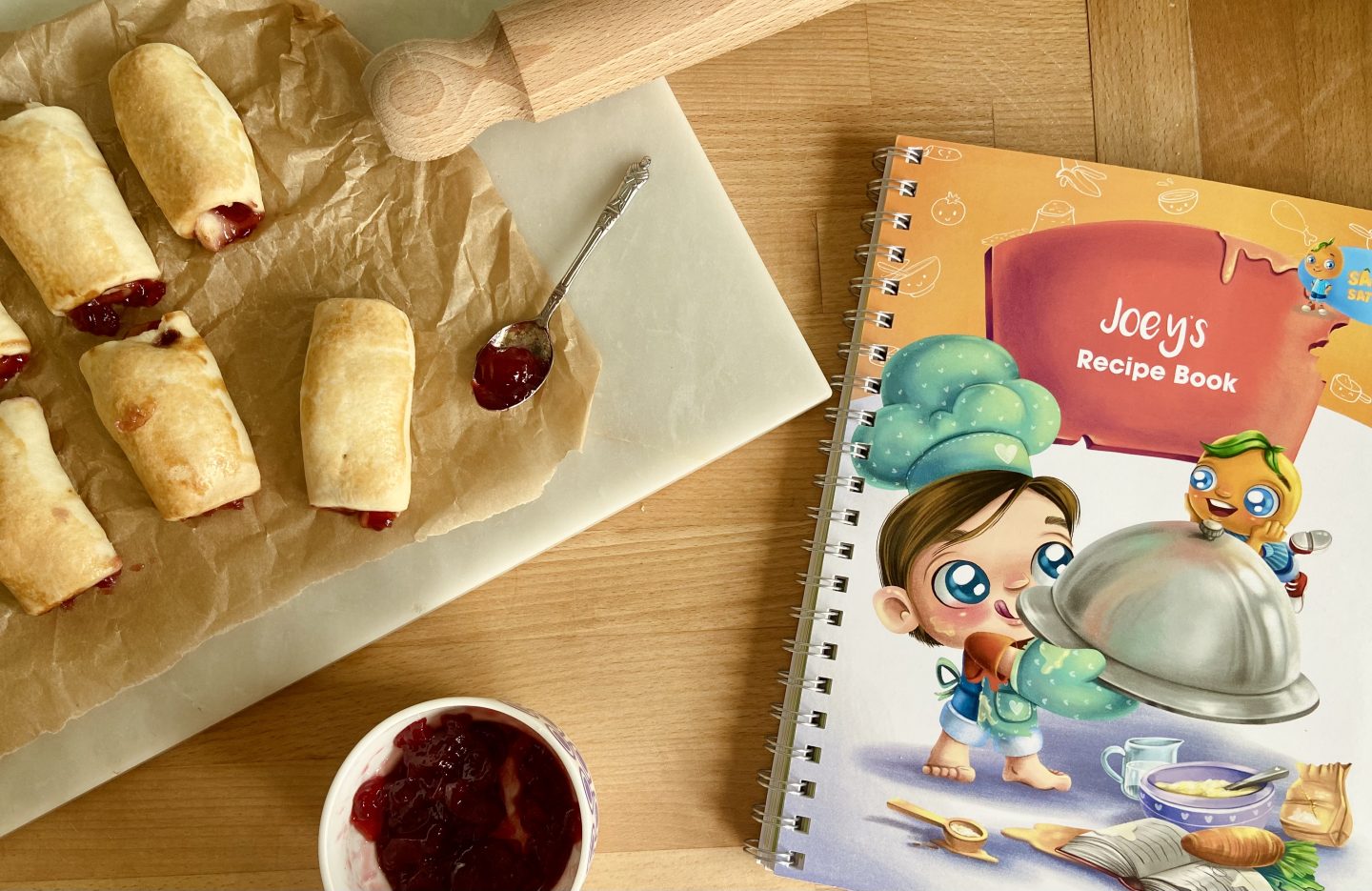 This week Joey came round for the afternoon to do some baking. He turned three last month, and although I wasn’t entirely sure how good he would be at concentrating, I thought it was worth a try as cooking with kids is one of my favourite things to do. I always volunteer for the cooking activities at Brownies because they just love it so much and there’s always at least one who tries something they thought they didn’t like.

Initially Joey was sceptical about standing on the chair and seemed more interested in putting a yellow football in and out of the shed and saying he was going on holiday, but as soon as I got him in front of the pastry and he realised there was jam to spread he was 100% invested. 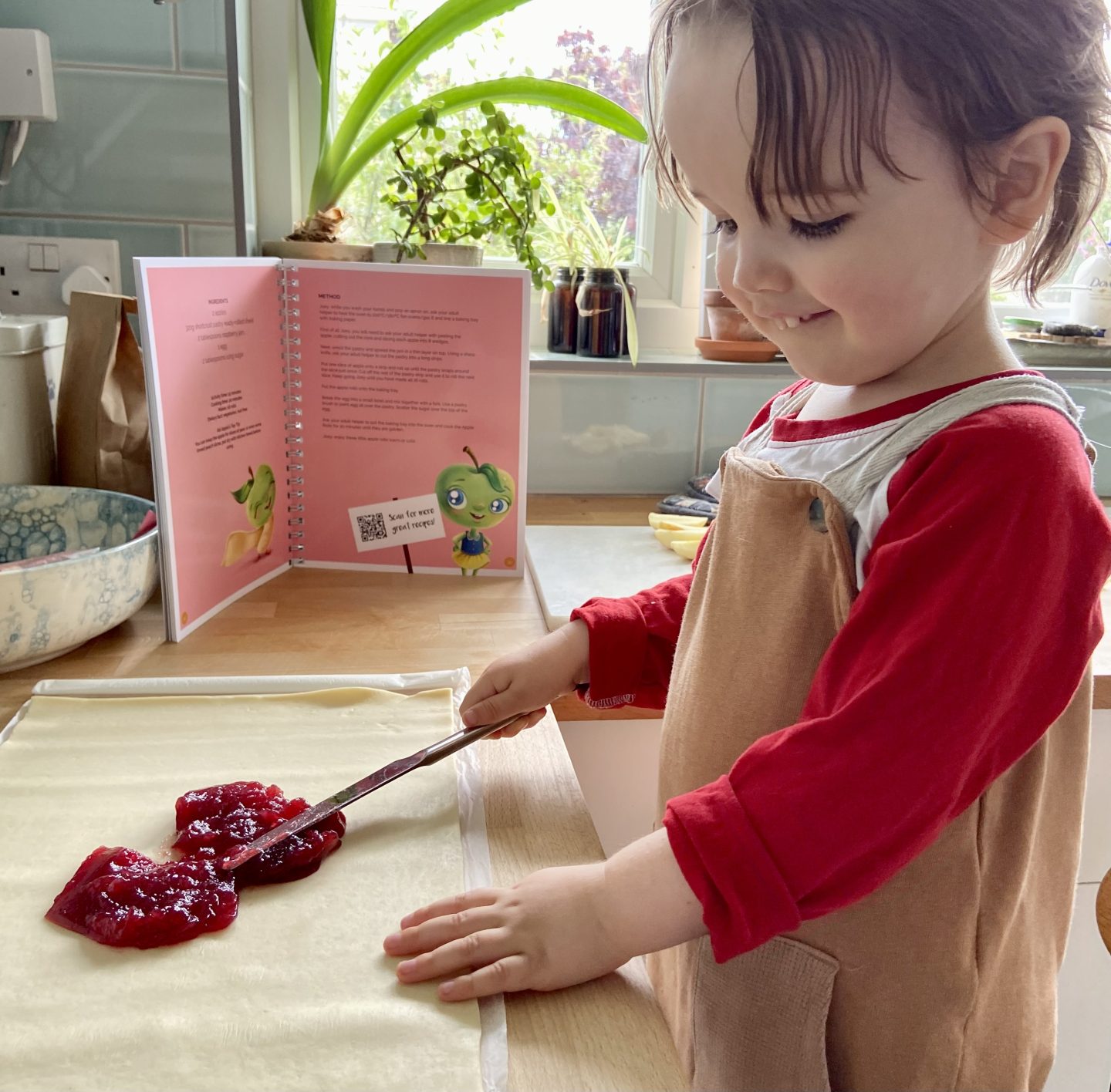 We were making a recipe from Joey’s new personalised recipe book from Sammy Satsuma. The concept behind Sammy Satsuma is simple – cooking is fundamental in teaching children about food and nutrition and getting kids involved in cooking means they’re more likely to try new foods. Being part of the cooking process gives them a sense of pride and investment in their food, which makes it a totally different experience from just having a meal plonked down in front of them.

Apart from all of that, cooking with kids is FUN. If the idea of the long summer holidays ahead is starting to make you nervous, then this could be just what you need. Baking treats or cooking a meal is a great summer holiday activity and there are loads of recipes to choose from for your book that would be perfect to cook and take out on a day out or picnic, meaning the baking becomes a part of a bigger day of fun.

Creating your personalised recipe book is super simple, you just add your child’s name, create them an avatar and choose your ten favourite recipes to feature in their book. The recipes are a mix of sweet and savoury and I picked some that I was sure Joey would like and some that I thought might challenge his taste buds a little more.

If you fancy making your own recipe book, either for your own children or as a gift for family or friends, then you can get 15% off with the code SLUMMYSINGLEMUMMY. I think it would make such a lovely present – so much nicer than just another plastic toy. 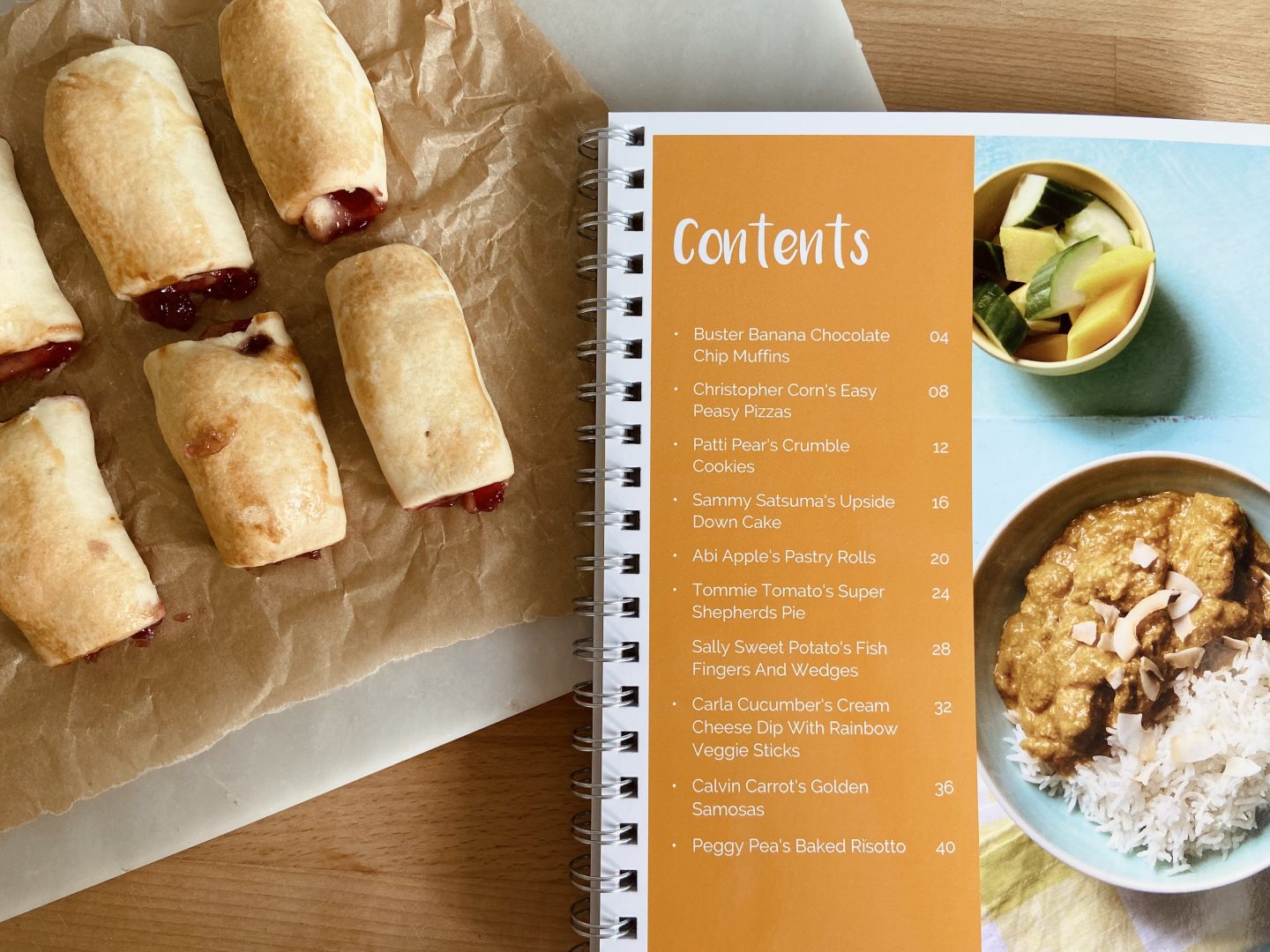 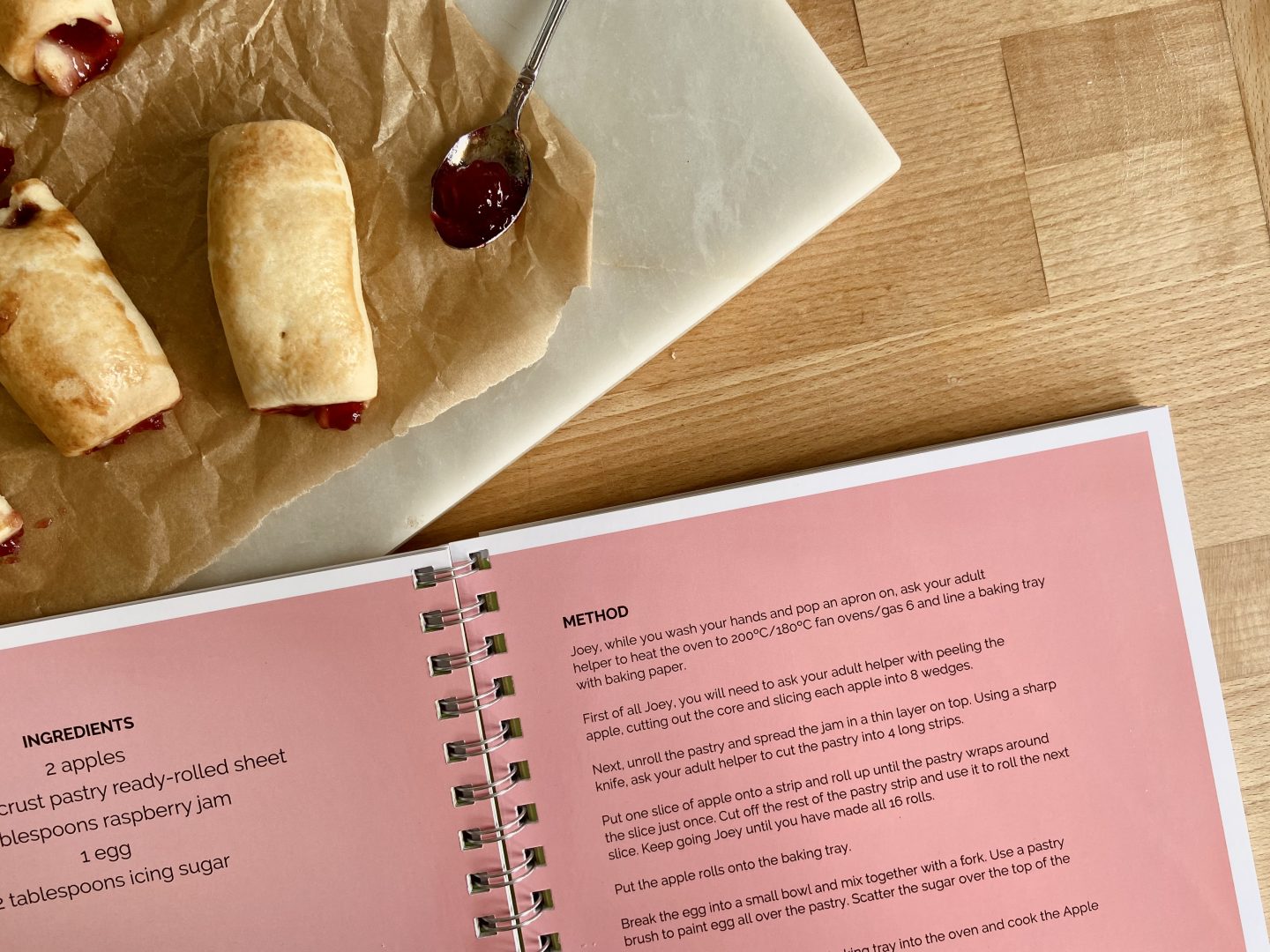 I included this apple pastry rolls recipe as Joey came home from preschool recently with the report that he was officially the best in his class at spreading mayonnaise.

‘Does he make a lot of sandwiches at home?’ they asked. 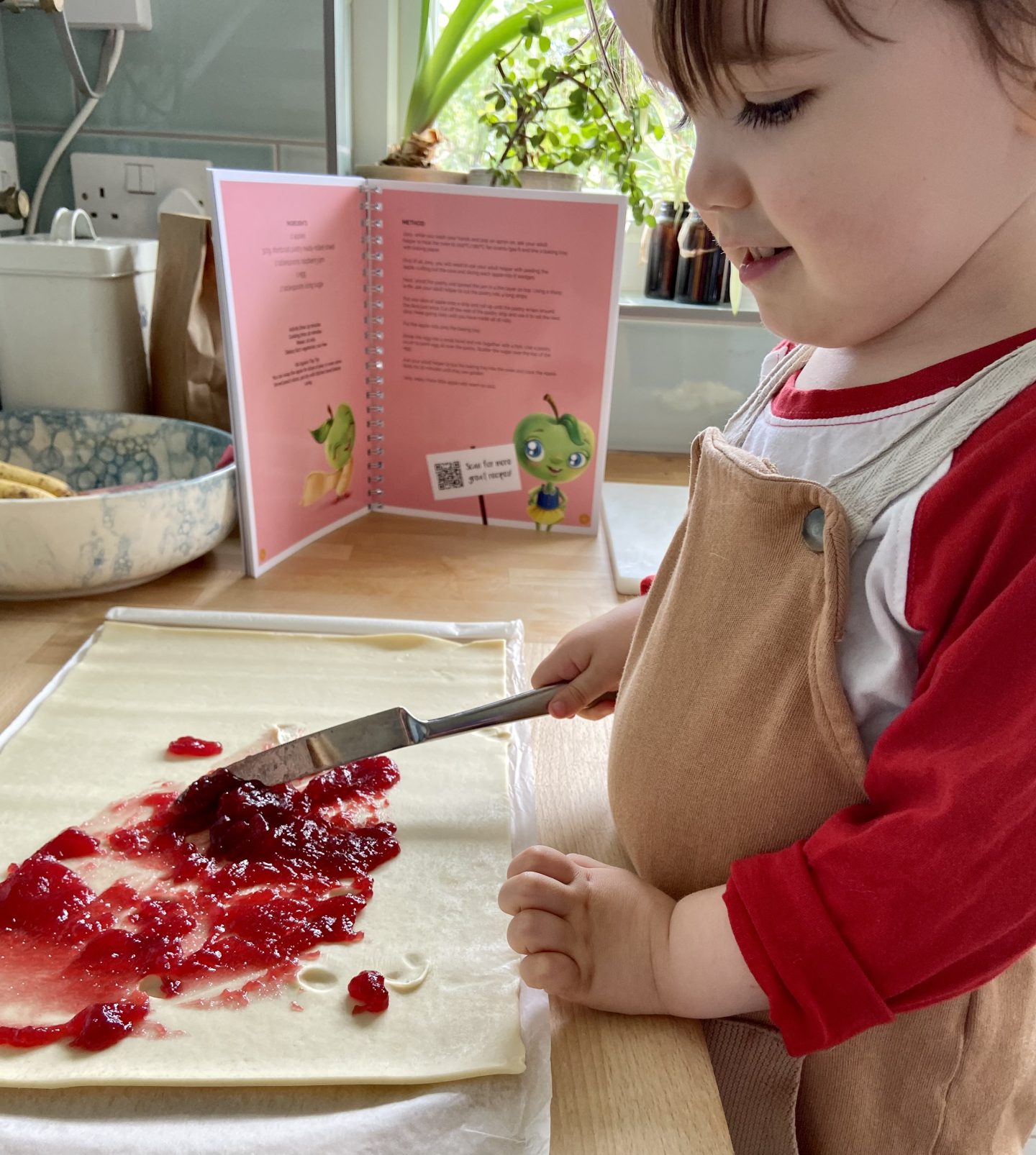 He lived up to the accolade and made a very concentrated effort to spread the jam, until of course he realised that jam is delicious, and then he decided that it might be more fun to just scoop up little bits of jam on his finger to eat. Every time he ate a little bit of jam he pulled his finger out of his mouth with a flourish and a POP sound, which honestly I thought was very professional of him. 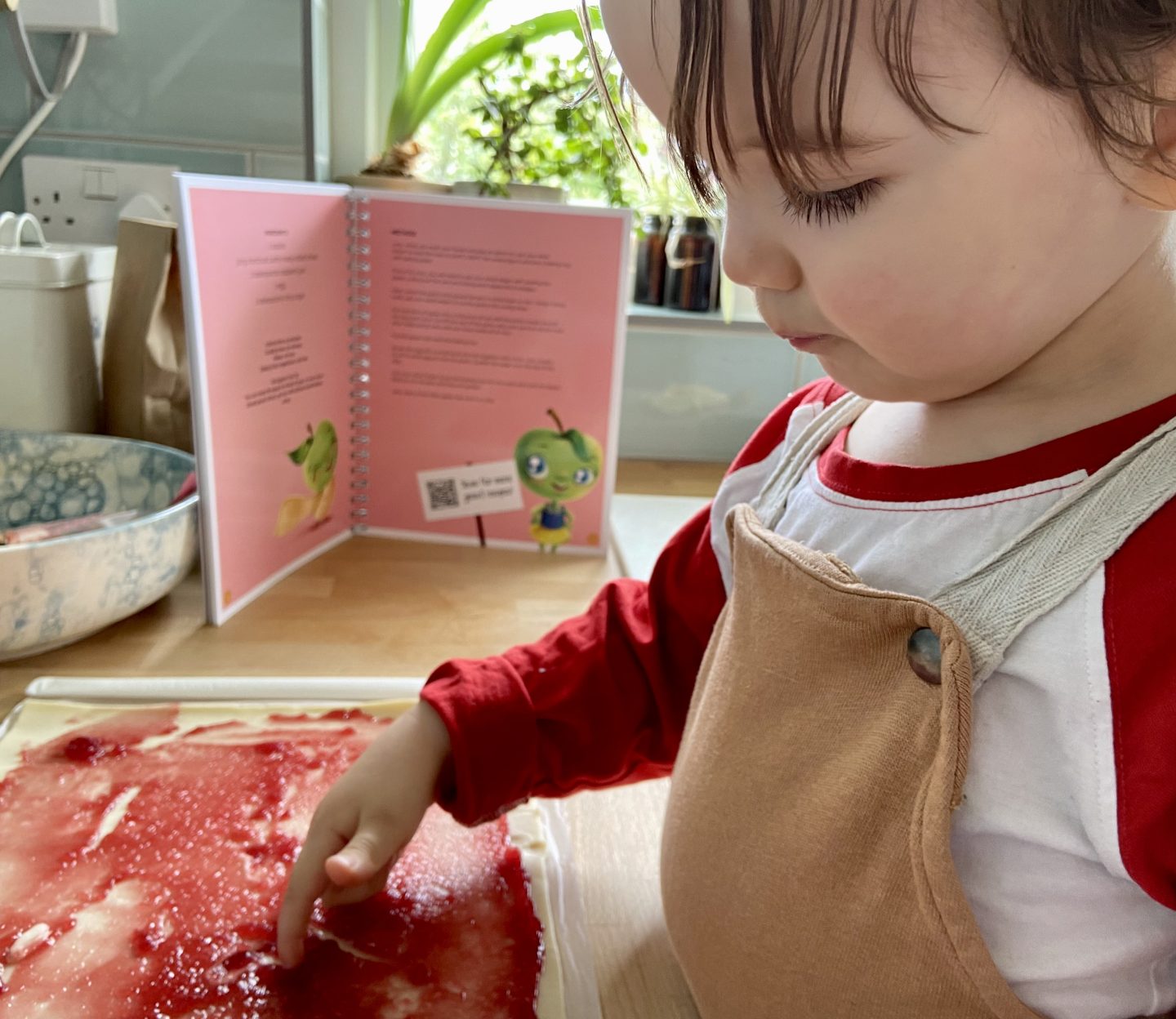 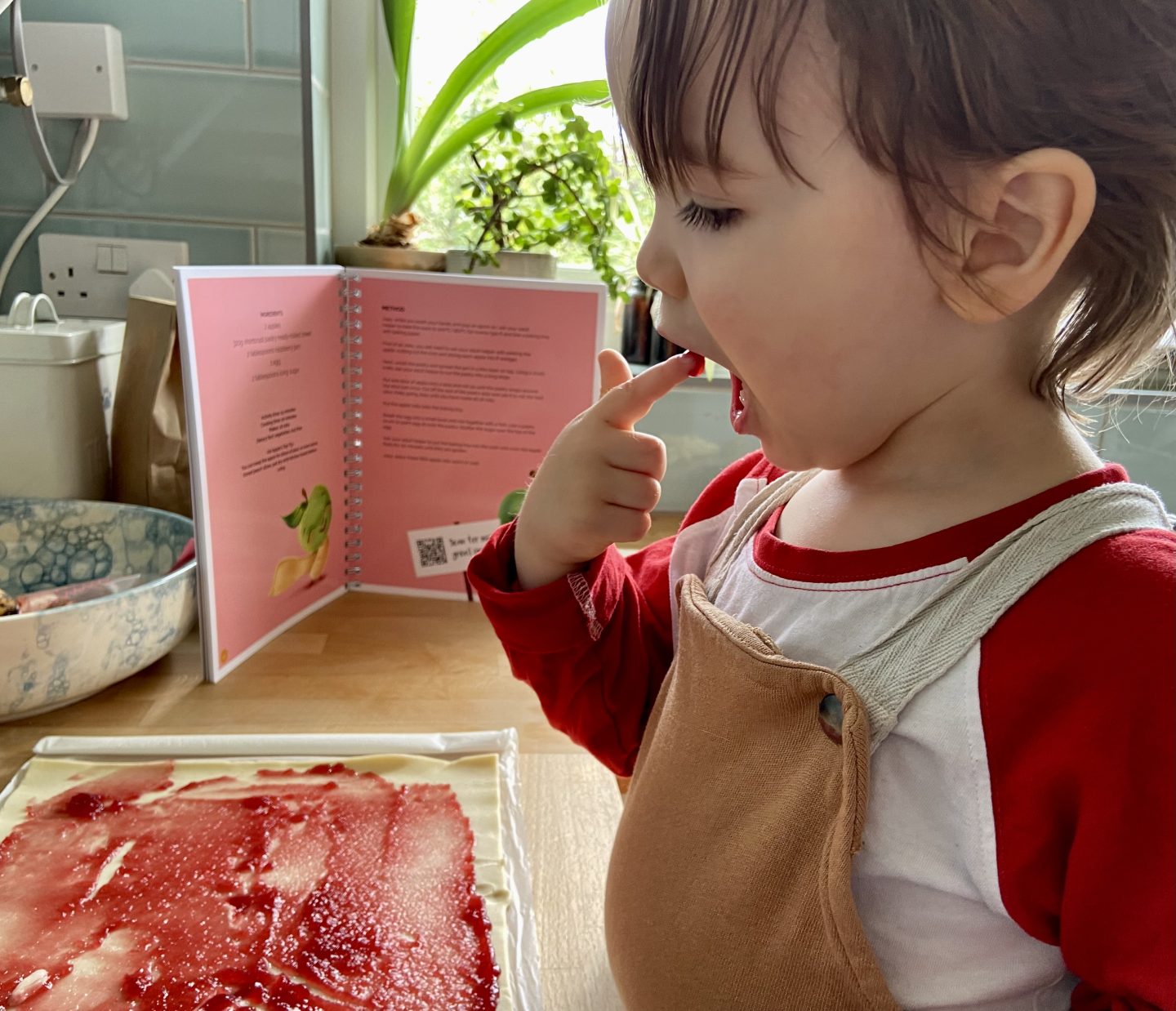 There are a lot of things I really like about the Sammy Satsuma recipe book. I like that none of the recipes are overcomplicated and that this makes them accessible for really small children. Joey might not be able to read the cute bits in the recipes yet that say things like ‘time to put your apron on Joey and wash your hands’, but there was plenty in this recipe that he could do himself.

I like the idea that he can keep the book and get more independent with it as he gets older. Sammy Satsuma would be suitable for very young, supervised children, right through to older children wanting to read and follow the recipe by themselves, with just help on the tricky bits. 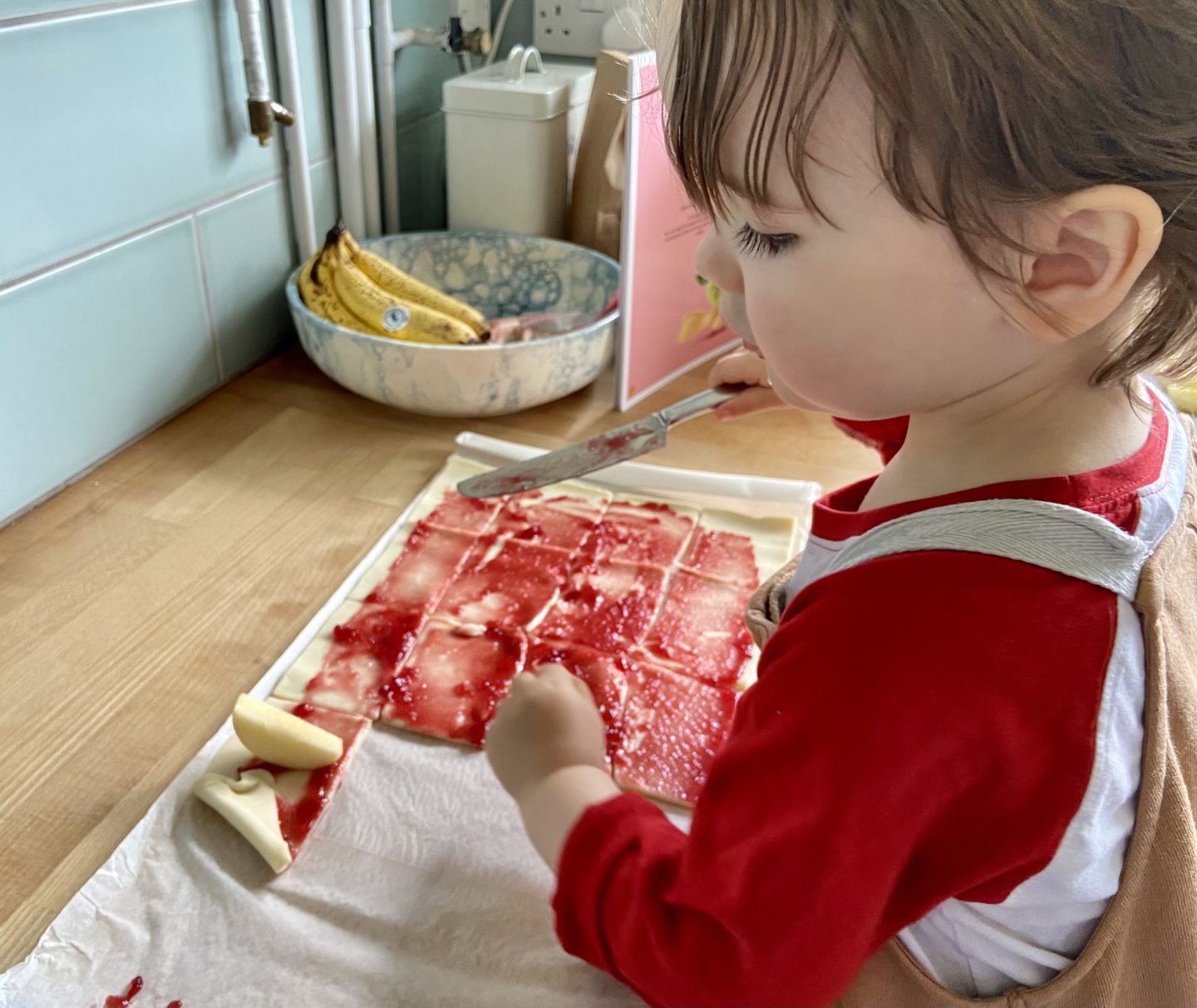 It reminds me of a book that Bee, (Joey’s mum and my eldest daughter), had when she was little – ‘Winnie the Pooh’s Tasty Smakerels’. There was a recipe in it for Tigger’s spicy biscuits that we used to make all the time and she still has the book now, which I love.

I also very much appreciated that the Sammy Satsuma recipe book has wipeable pages, unlike Pooh’s Tasty Smakerels, which will be forever encrusted with biscuit dough.

Joey’s absolute favourite bit of making his apple pastry rolls was the egg wash and saying the word ‘gloopy’. He concentrated so hard with the brushing and painted all of the rolls so delicately. He got a little carried away when it came to sprinkling the sugar and would quite happily have repeated the egg and sugar over and over again, but the pastry didn’t seem to mind. 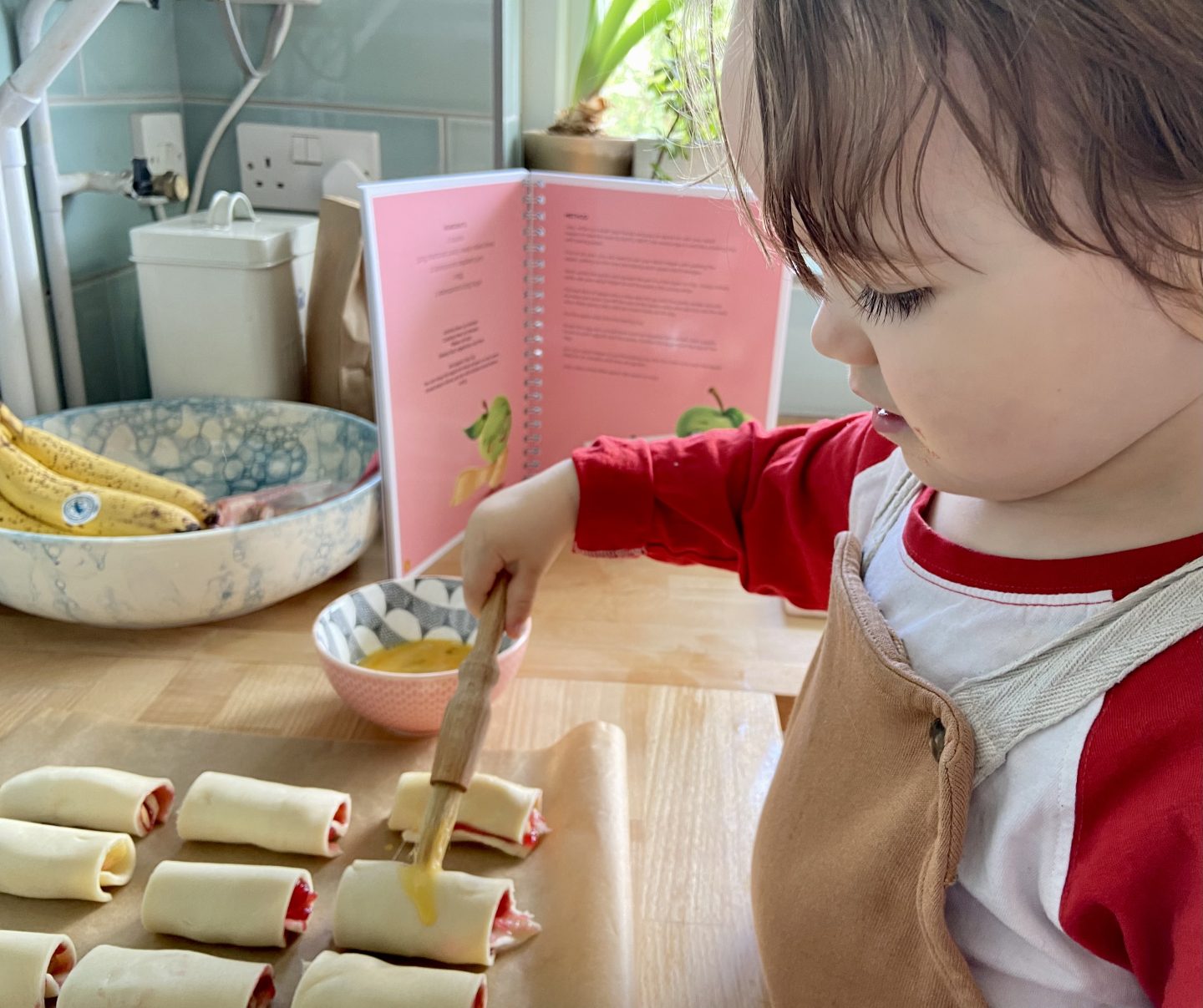 I was about to write something along the lines of ‘of course Joey’s favourite bit was getting the eat the apple pastry rolls once they were cooked and cooled’ but actually I’m not sure it was. He enjoyed the cooking process just as much if not more than the eating, and I loved doing it with him and seeing how well he responded to instructions and just how quickly he could learn new skills. 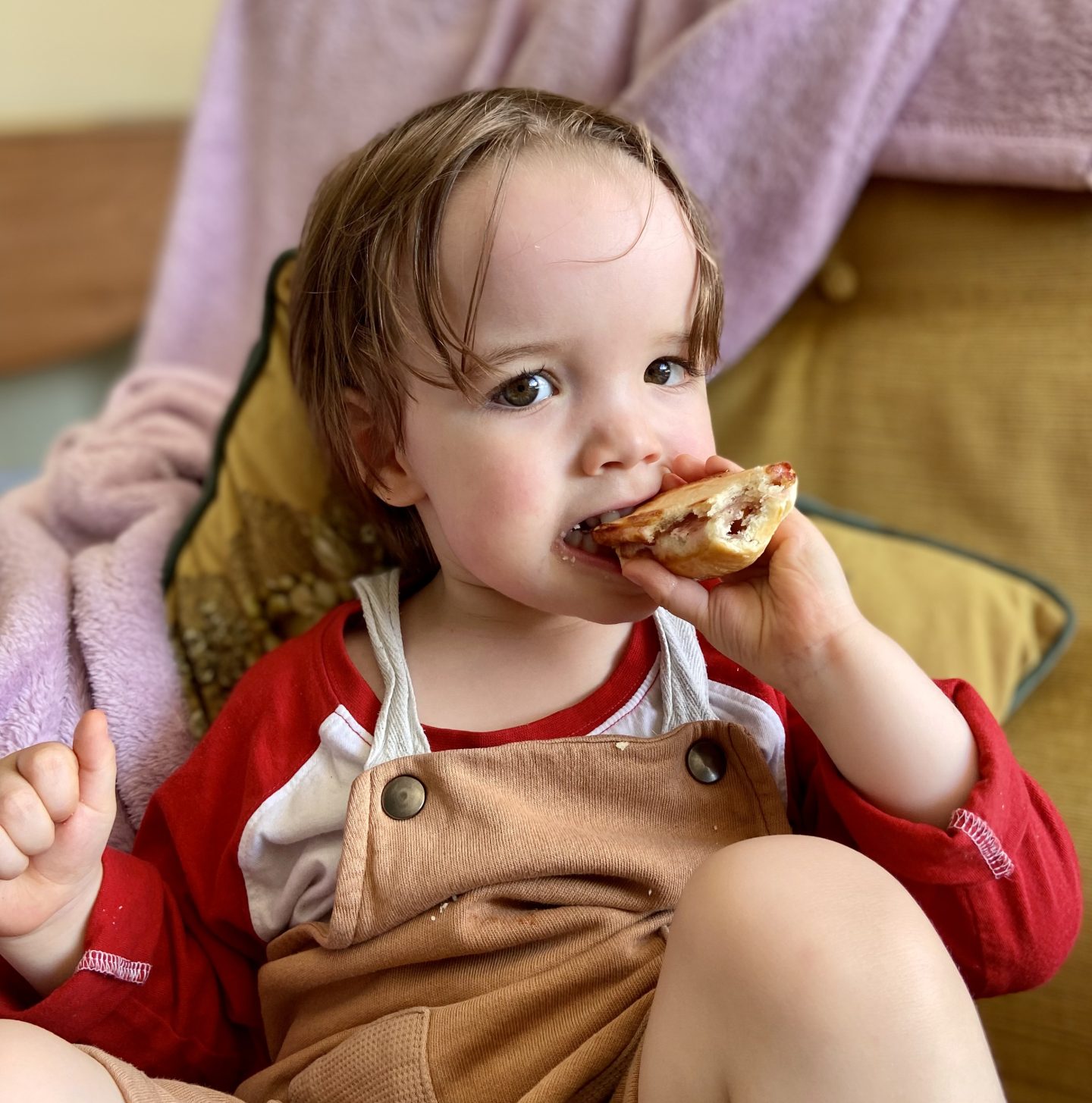 If you’d like to have a go at your own apple pastry rolls simply spread a sheet of ready made shortcrust pastry with jam, cut the sheet into 16 rectangles and roll a chunk of apple up in each piece, (two apples cut into eighths). Brush with egg and sprinkle with sugar and bake at 180 degrees for about 20 minutes.

Get this recipe and more as part of a personalised recipe book from Sammy Satsuma here. Don’t forget to use the code SLUMMYSINGLEMUMMY for 15% off.