Who doesn’t love a good candle? They may be the ultimate self-care cliché, but a good scented candle really does have a positive impact.

Scented candles have become a big part of my work from home life during the pandemic. Where once I’d head out to a cafe in town to work for the morning, (and not just for the brunch, honestly), I’ve instead had to create a workspace for myself at home. It’s been hard. I spent a lot of 2020 not working very much at all, and when I finally forced myself to put down the murder mysteries and come in from the garden, I repainted my spare room a dark green in a bid to create myself a serious but soothing work environment. (I have an Instagram highlight called workspace if you want to have a nose.)

I also bought about 48 scented candles.

I have a whole row of them lined up on the windowsill that faces me as I sit at my desk, and more on the desk itself. Whenever I realise I’ve been at my desk for an hour and done nothing but share Tinder screenshots on Instagram stories, I light some candles. I find the process of lighting them in itself can be a useful ritual, signalling to my brain that it’s time to get on with things, and the gently flickering light and the soft smells that quickly fill up my tiny green office lull me into a more contented state of work flow.

One of my favourite candles at the moment was a gift from Nooraa – one of their dark amber and sandlewood soy candles, made in the UK and with natural soy wax. Nooraa is all about sustainable luxury, so their candles contain no plastics, aren’t tested on animals and are 100% vegan. 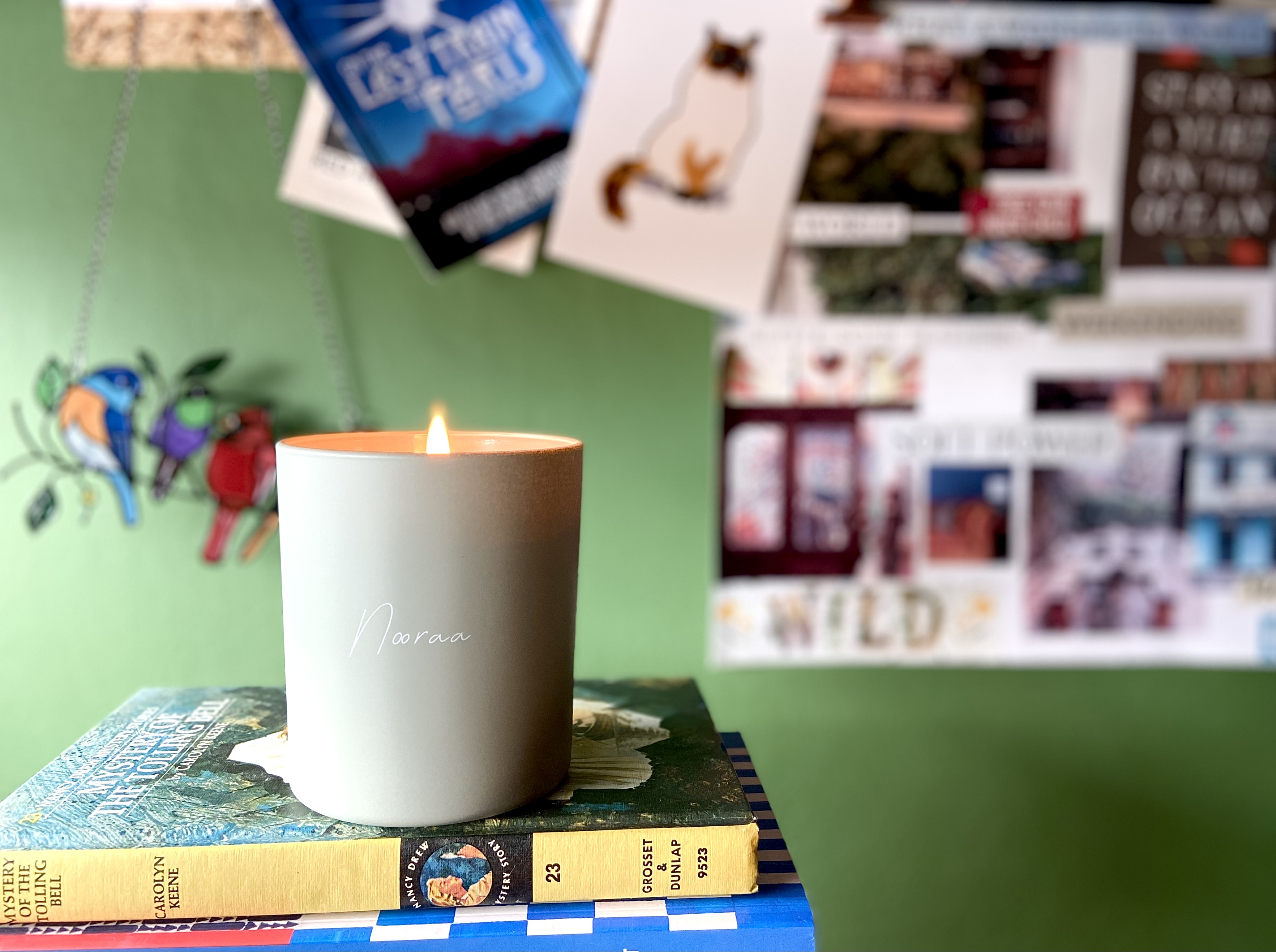 One other very cool thing about Nooraa candles is that they don’t do the annoying ‘tunnelling’ that so many candles do. You know when you first burn a candle, but you don’t burn it long enough for the wax to melt right to the edge, and then forever after it only burns to that first melting point? Nooraa candles don’t do that. I was so pleased to discover this, (accidentally), because I find it so irritating when you waste half a candle just because you were a chump on your first burn.

Anyway, the gist is that candles are great and Nooraa makes good ones, so if you fancy winning a Nooraa scented candle then I’ve got one to giveaway. Hoorah!

They’re normally £26 ans if you’re like me that’s exactly the treat level you decide you can’t justify spending on yourself, so it’s the perfect thing to win a competition instead. To enter, just do the bits it the widget below – the more you do the higher your chance of winning. The competition will close at 11.59pm on February 14th and is open to UK residents only. Full T&Cs apply.