‘I pressed the button.’

It turns out that the Nissan LEAF was on, but that the whole thing about an electric car is that you can’t hear it. Dur. I mean I knew that, or I knew the theory of it, but I didn’t expect it to be so quiet that I literally couldn’t tell whether I’d switched it on or not. Even pulling away it had an eerie nothingness about it, as though we were on one of those little trains giving us a tour of a theme park. Or a milk float.

If you’ve not seen the Nissan LEAF before, here’s a short introduction:

It felt a bit odd to be honest doing a car review during lockdown. How do you test out a car when you’re not really allowed to go anywhere? It’s a good question. I guess a lot of the features of a car can be tested without going very far at all, like the Nissan LEAF’s parking sensors and camera system – you only need to go to Tesco for that.

The Nissan LEAF allows you to see exactly where the car is in relation to the curb and to vehicles around it. I found really useful as despite always having been an excellent parker, I seem to have become hopeless at it over the last few years. I pull into a parking spot and think it’s fine, and then I come back to the car and it’s all at weird angles and over the lines, like someone has come along and moved it while I’ve been shopping.

Honestly, I went on a date at the end of last year and he walked me back to my car and it was EMBARASSING how badly I had parked. If I could have got into another car I would have done.

The Nissan LEAF also has handy extras like a little light that shows on your wing mirror when something is in your blind spot – I’m a bit of a driving nerd for looking over my shoulder on motorways but it’s always useful to have a back up.

Your battery life is displayed on the dashboard at all times, so you always know how far you have left.

Charging is pretty straightforward – you download the ecotricity app, set up a payment card and then just scan the QR code at the charge point when you want to charge the car.

We did a slight issue with the charging as the first charge point we went to wasn’t working. I’m not sure what was the matter exactly, the screen on the charging point was just blank, so we had to switch our plans and go down to the next motorway junction to recharge. (I also forgot to take my credit card for the three digit security number, so we had to go home for that, but that was entirely user error.) 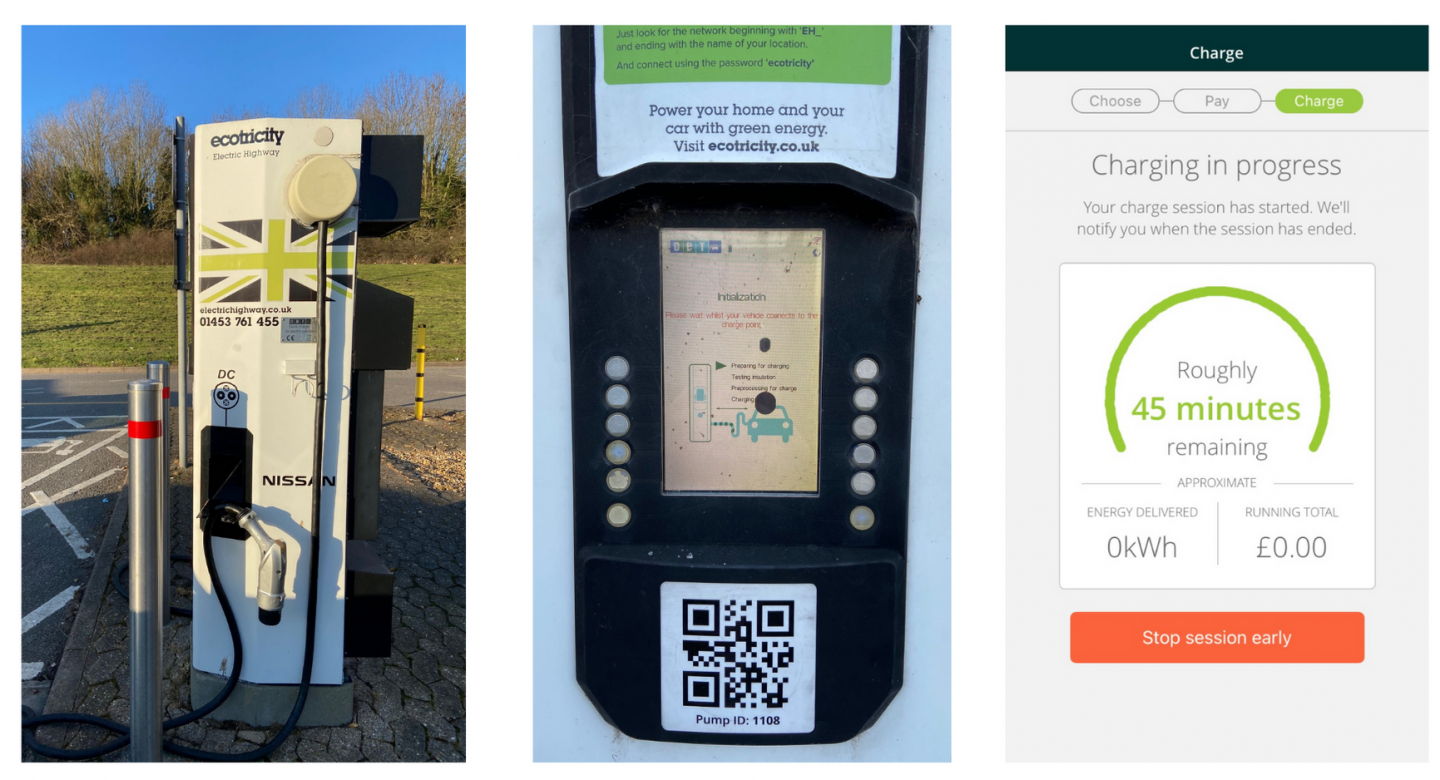 Once you’re all plugged in the app tells you exactly how much energy has been delivered and what your running total is. Our second issue came at the end of the charge when I couldn’t disconnect the lead from the car engine. I was briefly quite panicked about this as I was worried I’d plugged it in wrong and messed it up, Much tugging did nothing at all and I imagined myself just trying to ignore it and driving off, dragging the charging station behind the car in some kind of awful Fawlty Towers type moment.

I sat in the car for a minute to calm down and had a Google. It turns out the car automatically locks the cable in place during charging and to release it you just press a button on the key. On reflection this makes sense – I guess you want to be able to charge your car at your house overnight or leave the car charging while you go into the motorway services or do your Tesco shop or whatever without worrying that someone is going to unplug it. I was relieved.

Performance wise I honestly wouldn’t have been able to tell that it was electric once we were on the move. I was worried that the milk cart vibes might be obvious in the speed or acceleration in an electric car but they didn’t at all. The Nissan LEAF felt great to drive and had plenty of zip when I put my foot down.

It was smooth, comfortable and very spacious too – the back seats could fit three people comfortably (if we were allowed to see that many people) and the boot had plenty of room for a large pushchair, lots of shopping or whatever else you might expect to carry around in a family car. This was a big plus for me as in my mind electric cars are smaller and more just for couples pottering around town, not families with lots of luggage.

Overall then we had a fun week with the Nissan LEAF and even though we weren’t really allowed to drive it very far, we enjoyed the short journeys we were able to take. If you’re looking for a practical electric car that would suit a small family then the Nissan LEAF should definitely be on your shortlist.

Find out more about the Nissan LEAF range. 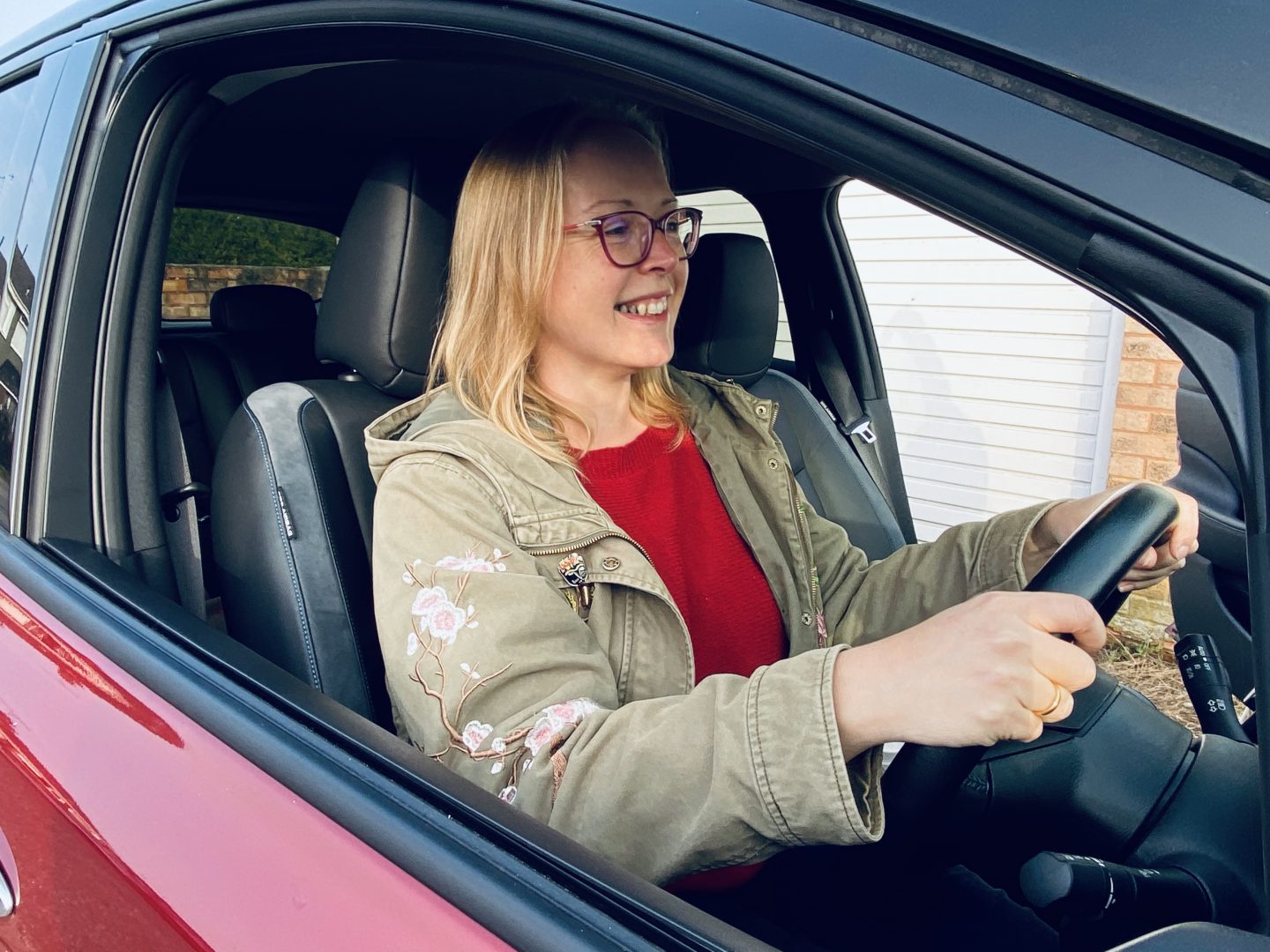