(Which we know I am, because I made my own party rings and they were quite possibly better than the real thing.)

I posted this picture of it on Instagram at the time and honestly, barely a day goes by when I don’t think about that sandwich. 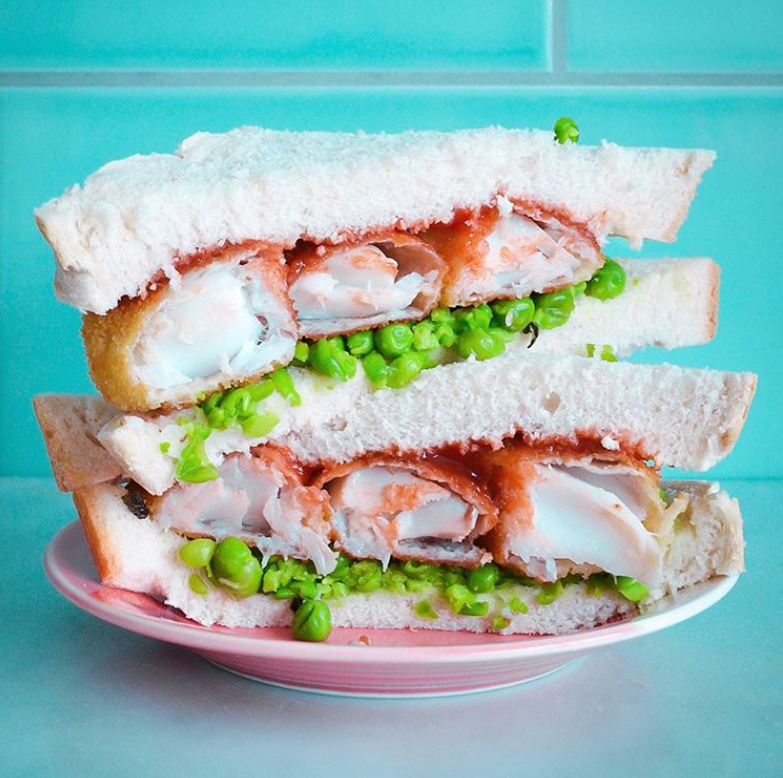 God it looks so good doesn’t it?

(‘Didn’t you already do a post about that sandwich?’ Belle asks, looking over my shoulder as I type. ‘I did,’ I say, ‘but just on Instagram.’ She nods. ‘People deserve to know how it’s made,’ she says, sagely.)

If you ask Belle about my cooking, she will tell you about the ONE TIME that I ALLEGEDLY served her up three solitary, burnt fish fingers for tea and on a fish finger scale, with those at one end, this sandwich is at the other. I cannot thing of anything that could beat it in terms of fish fingery deliciousness.

I thought I’d write a little post telling you how to make it, in the hope that this would then help me process it mentally, and I wouldn’t have to see it in my dreams every night. Fish finger sandwich closure if you will.

So, here’s how to make the ultimate homemade fish finger sandwich.

Get yourself a nice bit of cod fillet and slice it into fish finger shapes. Prepare three shallow dishes, one with plain flour, one with beaten egg and one with breadcrumbs. (I used the kind you buy ready made as I find them much easier to work with.) I can’t give you amounts because I was just on a roll with this sandwich, so use your initiative, you’re a grown up for heaven’s sake.

In turn, dunk each fish finger into the flour, then egg, then breadcrumbs, making sure it’s evenly coated. It feels like a faff, but wash your hands between each one and you’ll get a much nicer finish and they will be easier to handle.

Heat a little oil in a pan and cook your fish fingers, frying gently on each side for a few minutes until the crumbs start to turn golden. I can’t remember how long exactly. It was February. Long enough let’s say.

While they are cooking, boil some frozen peas for a few minutes and then drain and smoosh with a little salt and olive oil. You could add in a little fresh chopped mint if you have any to hand, but it was winter and so my garden mint wasn’t exactly in its prime.

Cut some fresh white bread into chunky slices and spread with a little butter and ketchup. Layer up the bottom slice with the peas and then place the cooked fish fingers on top before sandwiching it all together with the second slice of bread.

Close the curtains, switch off your phone and eat your fish finger sandwich.