This is a guest post from Bee, who was sent a gluten free apple cake from Sponge for the purposes of this review. 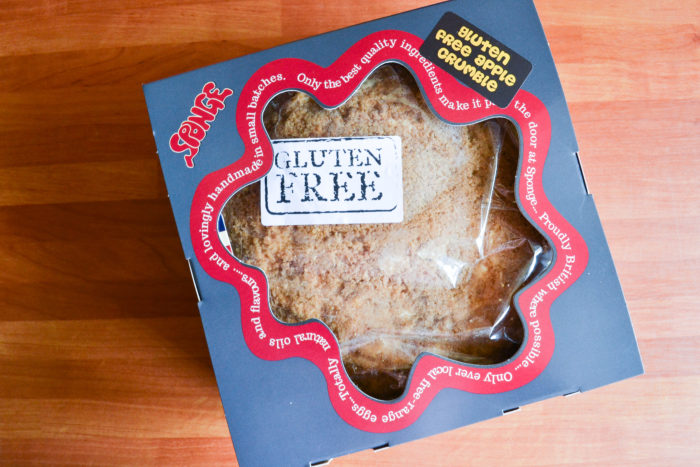 I need to talk to you all about the best (gluten free) cake on the whole of the internet. I say internet because my sort of sister-in-law made me a really nice gluten free birthday cake that was definitely as good as this one, so they have to take joint first place in the very important cake league table in my mind.

Anyway, when I was about six months pregnant I was becoming really ill after food and I soon worked out that wheat, and more specifically gluten, was the culprit. It took a couple of months of going cold turkey but it finally helped my skin breakouts, heartburn, digestive issues and a host of other crappy stuff I had been dealing with that I had just put down to pregnancy symptoms.

I optimistically thought that when I gave birth I would regain my tolerance to gluten but alas, it was not to be. I’m quite sad about it because even though I like feeling good in myself and not hideously ill, there are so many things I miss that contain wheat and other gluteny stuff. (Looking at you, Starbucks fruit toast.)

‘Free from’ alternatives have come a long way in recent years but gluten free stuff is still really hit and miss and with it often being so expensive I feel reluctant to try too many new things in case it’s a total waste of money. That’s why when Sponge offered me one of their gluten free cakes to try I jumped at the chance. 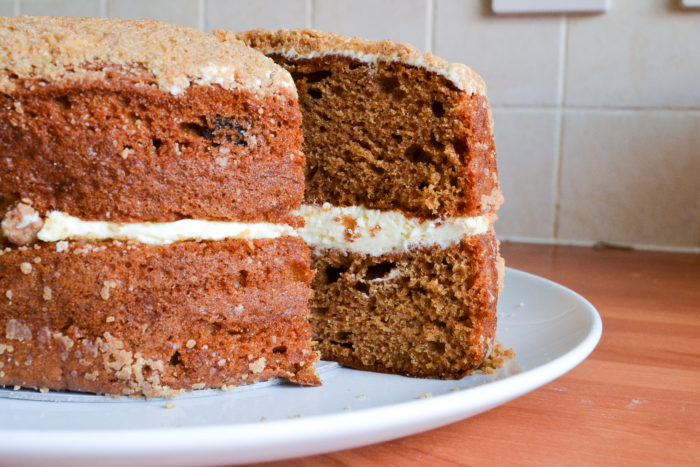 I probably actually jumped as well because I’m hungry all the time – when I’m not breastfeeding I’m pumping milk like crazy and I also just really missed a decent piece of cake.

(Sponge does all kinds of cakes btw, not just gluten free ones, so if you can eat gluten then knock yourself out. They also offer vegan options – a chocolate cake and a carrot cake. They’ve basically got cake COVERED.) 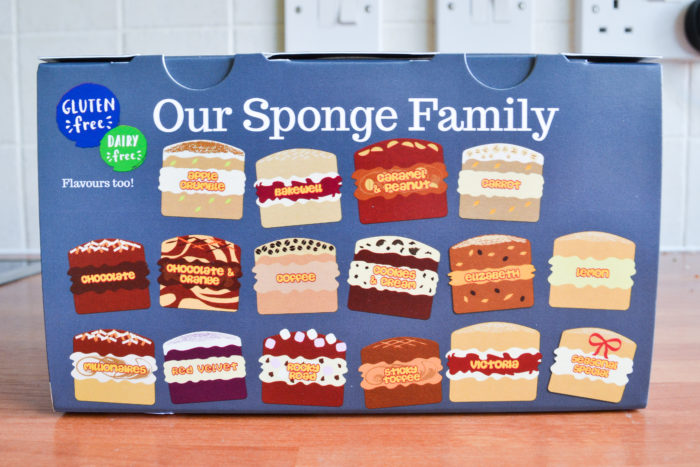 I’ll admit that I was sceptical while I waited for it to arrive. Like lots of products, Sponge claims that you “won’t notice the difference” but I’ve learnt the hard way with gluten free stuff that that doesn’t always mean what it says it does. But Sponge low-key came through for me on that promise!

I got the apple crumble cake and it was light, fluffy, moist and the perfect cake texture. It actually got even nicer and moister as the days went on, which is rare in gluten free products – they usually dry out really quickly and are quite claggy.

I always thought that to buy a cake off the internet was a bit boujee, but the apple crumble cake was less than £15 and I got at least ten decent sized portions out of it. (It says serves eight but that would be eight massive slices.) At a cafe down the road, I’d get a less-nice piece of gluten free something for at least three quid, so it really adds up and makes a lot of sense if you think about it. They also do next day delivery if you order by 2pm, so perfect for last minute birthday plans or if you have someone coming round and you want to act as though you’ve casually made a perfect gluten free cake.

I don’t say this with many things I review, but I would genuinely buy this cake for myself again just because it was so delicious. I actually miss it. I think about it every day. The sweet crumble topping haunts my tastebuds. I dream about it at night.

[Note: when I messaged Bee to say thanks for writing this, she replied with ‘I genuinely think about that cake every day.]

If you are gluten intolerant, do one good thing for yourself and order one of these cakes. Seriously. I think it counts as a form of self care.

If you don’t fancy splashing the cash on the cake of dreams though, we have a competition for you where you can win one of these cakes for yourself! You can pick any whole, eight person cake and can go for regular old cake, or gluten or dairy free options.

To enter, first have a browse on the Sponge website at the whole cakes and leave a comment telling me which cake you’d choose. (I’m thinking Gin and Tonic cake for Mum?) Register your comment in the widget below and then complete as many of the bonus entries as possible to maximise your chances of being able to EAT CAKE FOREVER! Okay, so not forever. A few days at least though.

The competition will close at 11.59pm on August 26th and full T&Cs apply.