Advertisement feature in association with McCoy’s

That title’s a bit of a mouthful isn’t it? ‘A Mexican feast with McCoy’s Muchos’. Try saying it after a few shots of tequila, see how you get on.

I’ll tell you what DOES make for a bit of a nice mouthful, (smooth Middleton, smooth), and that’s Muchos – three feisty Mexican flavours of folded tortilla crisp from McCoy’s, the UK’s number one ridged crisp.

To be honest, I tend to think of myself as more of a Jaffa Cake kind of girl than a crisp person, but when I sat down with a bag of Nacho Cheese flavour Muchos last week, (just for research purposes you understand), I found myself half way through a sharing bag before I’d even got to the first ad break in Celebs Go Dating. They’re just too damn moreish. That crunchy texture, the flavour… I had to get Belle to take them away from me in the end. 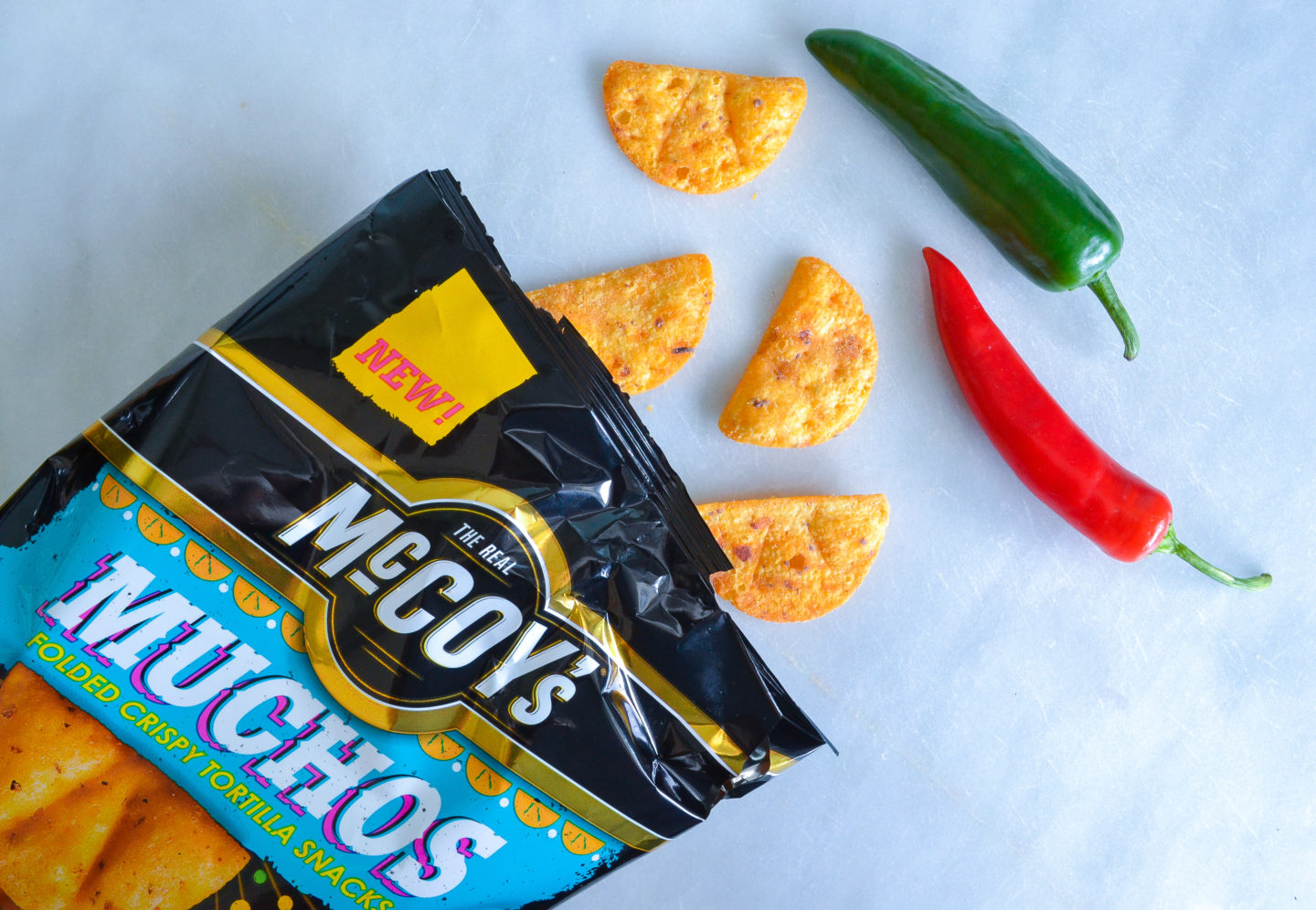 Available in Smoky Chilli Chicken, Nacho Cheese or Sour Cream & Onion, you could quite easily just chomp your way through a big bowl of Muchos and dips with friends, but I thought it might be nice to use them as part of a feast.

I’m calling this feast ‘deconstructed nachos’ because everyone knows that calling something ‘deconstructed’ makes it fancy. I mean sure, it’s really just laziness – you can’t be bothered to finish making something so you call it deconstructed and then you can get away with serving it in bits – but let’s brush over that and enjoy the splendour of my Muchos inspired Mexican extravaganza shall we? 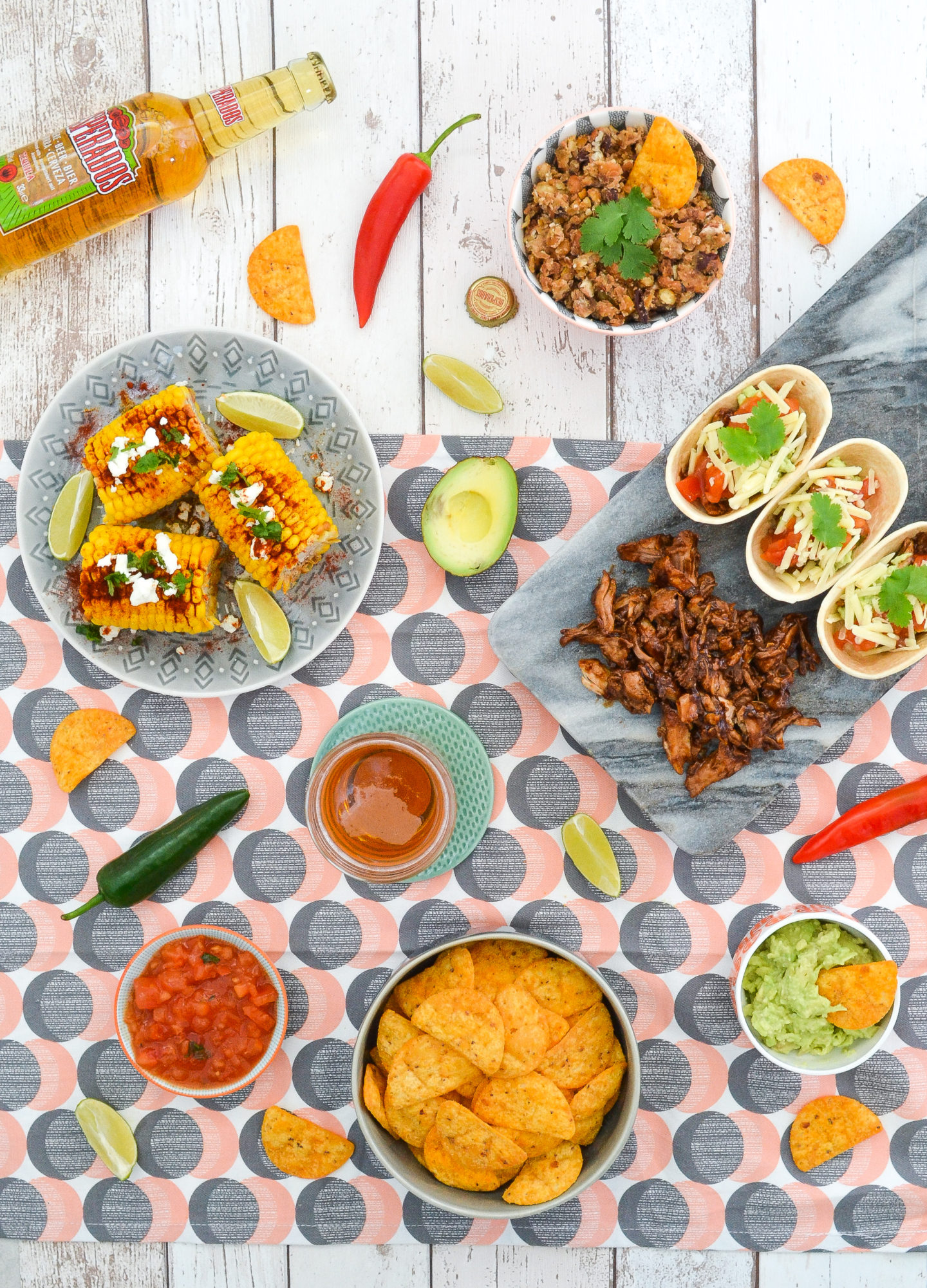 Thank you, thank you.

It genuinely looks pretty good doesn’t it? The beauty of this meal is that you can really make it as simple or as complex as you like, so if you wanted to make your own pulled pork from scratch then you could, but similarly if you wanted to just go to the Mexican section at Tesco and buy a load of ready made dips and salsa then that’s also fine.

Let me talk you through what I did, so you feel suitably inspired to recreate this Mexican Muchos family feast for yourself at home:

These look GOOD don’t they? I think I’ve given the plot away a little bit with the title though. Basically all you have to do is cook your corn on the cobs as usual, then dot each with a knob of butter, sprinkle with a little salt and smoked paprika, and crumble some feta over the top.

I added a little bit of coriander too, because there is nothing that is not improved with a sprig of coriander, whatever my daughters may try to tell you.

These are definitely something you could just buy a tin of, but I thought it might be fun to make my own version as sometimes I find the tinned ones a bit too mushy, like baby food.

To make these, I heated a splash of olive oil in a pan and fried a drained tin of mixed beans with a teaspoon of cumin and a little salt, just until the beans started to crack – five minutes maybe? I gave them a rough mashing (ooer) and Bob’s your uncle. 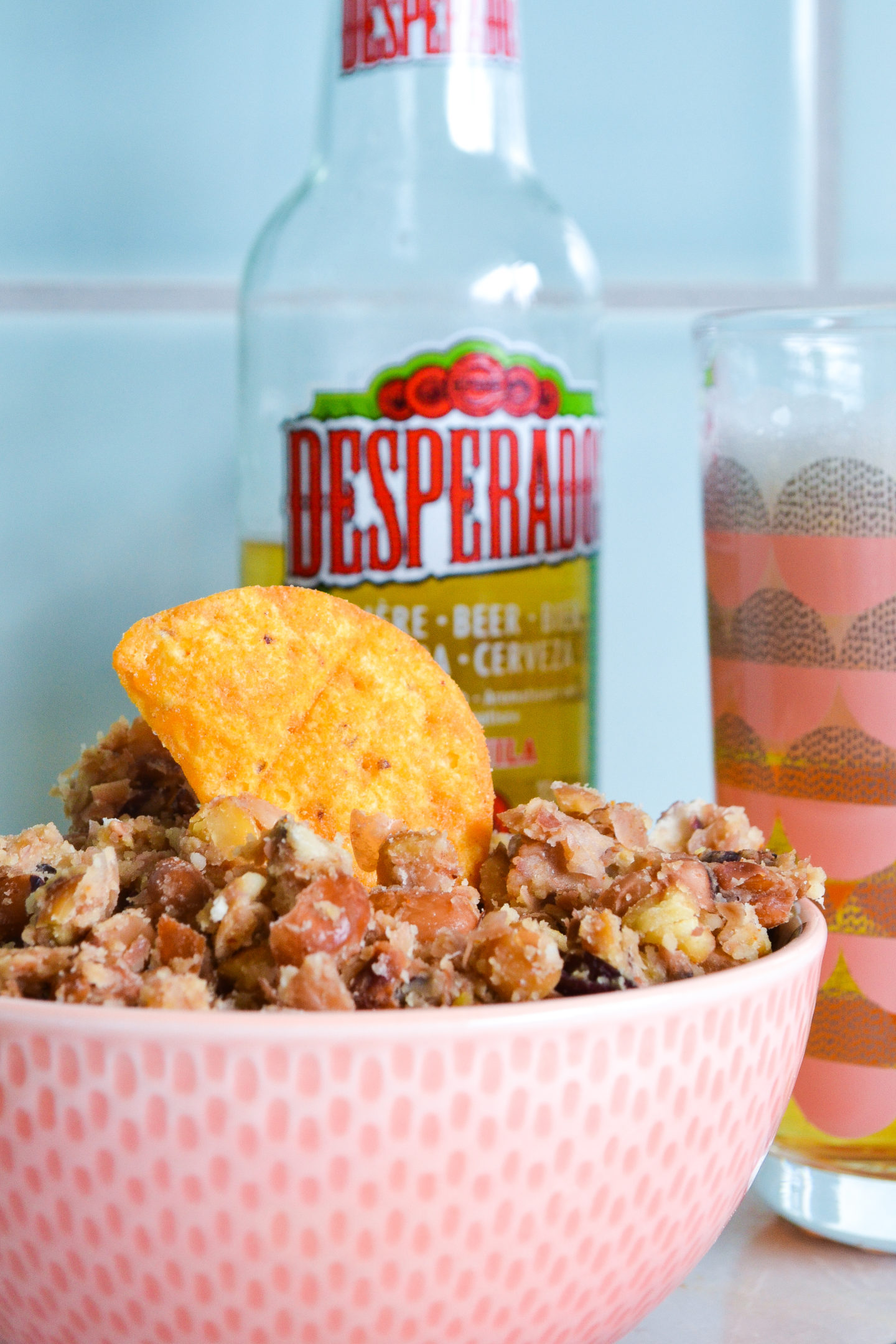 Although I do enjoy a certain amount of flexibility in my day to day life, I honestly don’t have the time or the inclination to pull my own pork, or whatever the term for it may be. I used a ready made pulled pork that you stick in the oven for half an hour and it was delicious.

On the pretty grey marble slab next to it you can see some soft mini taco shells, which Belle loves. I enjoyed just shovelling everything into my mouth on Muchos, but it was fun to have an alternative vehicle for table to mouth transportation of tasty treats. 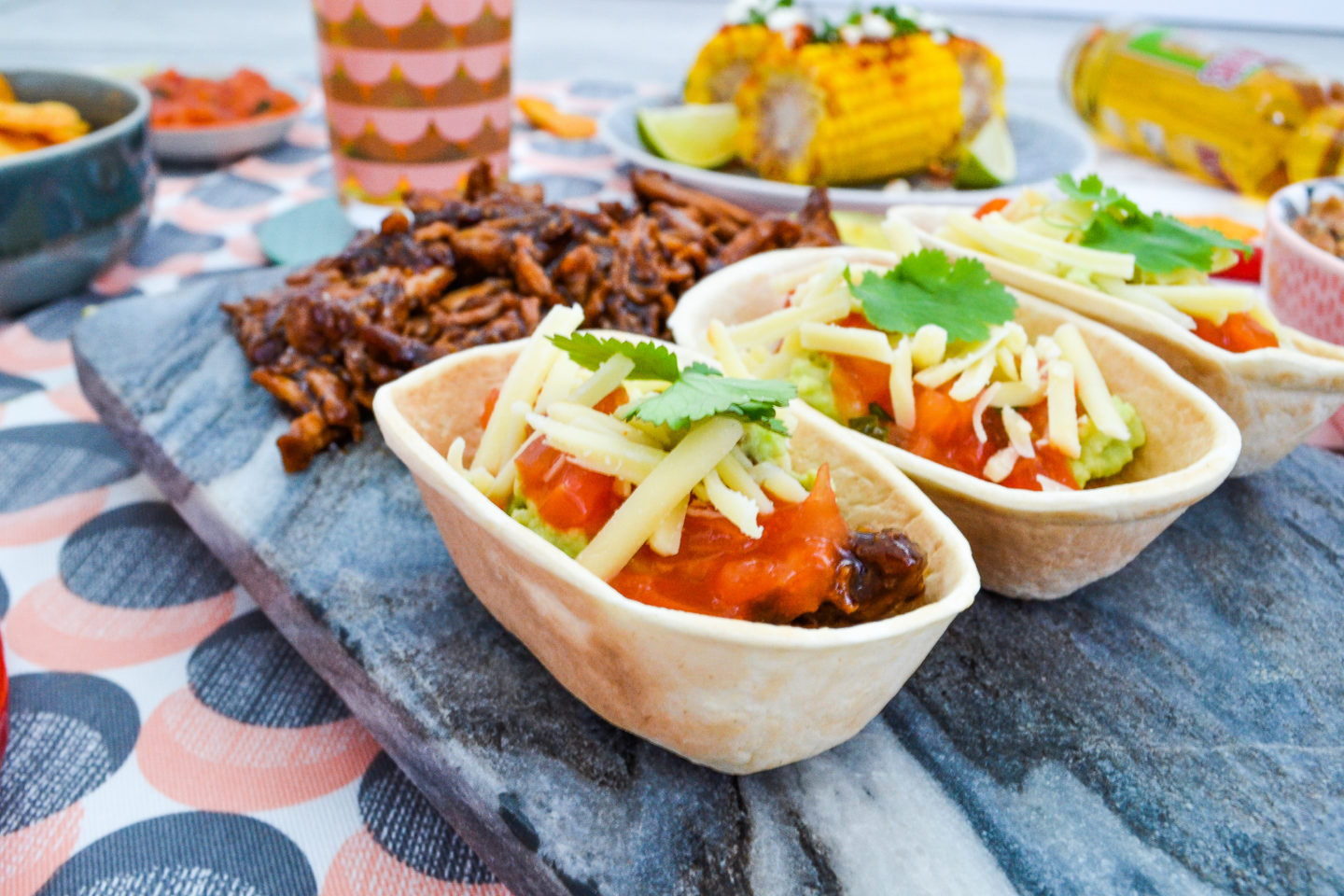 Okay, so the salsa is from a tub, via the chilled section of the supermarket, but I did make the guacamole myself. Guacamole is one of those things that is VERY easy, but looks super impressive. I once made some kind of Mexican dish – enchiladas maybe? – very early on in a relationship and it went a long way to help with the seduction process. The guy admitted he was very impressed, because he hadn’t thought I was the kind of girl to make my own guacamole, which was a bit of a back-handed compliment, but I took it anyway.

You can add in stuff like chopped tomato and garlic, but I kept this one really simple – just a couple of ripe avocados, mashed up with a drizzle of olive oil, salt and pepper and lime juice.

And that’s basically it! Chuck in a few bottles of Desperados – the drink of champions – and several bags of McCoy’s Muchos for dipping and you’re good to go.

Would you make this at home? What’s your favourite Mexican inspired dish?

New McCoy’s Muchos are available in supermarkets and independent retailers nationwide in a sharing bag pack size of 180g (RRP £1.99). 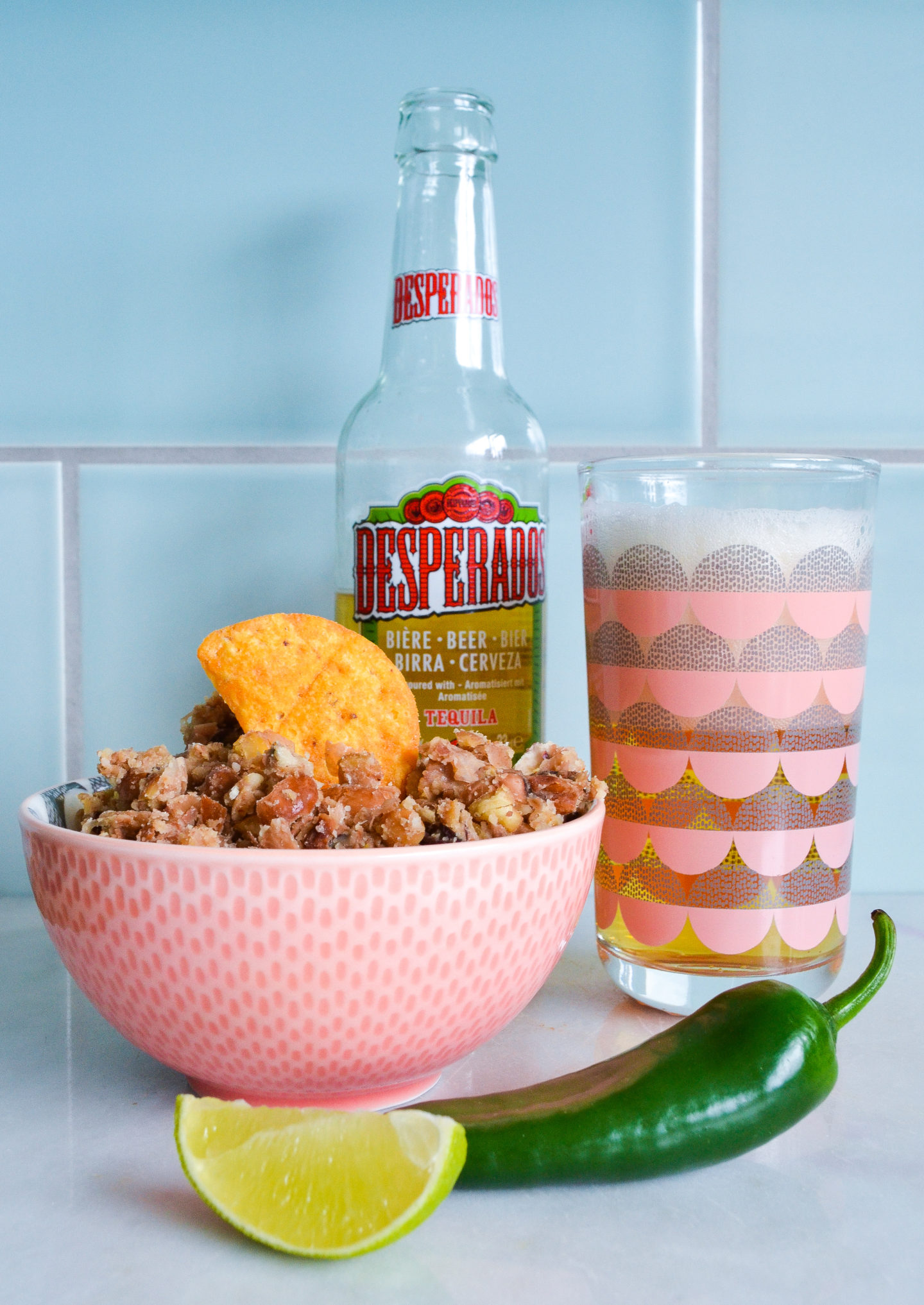