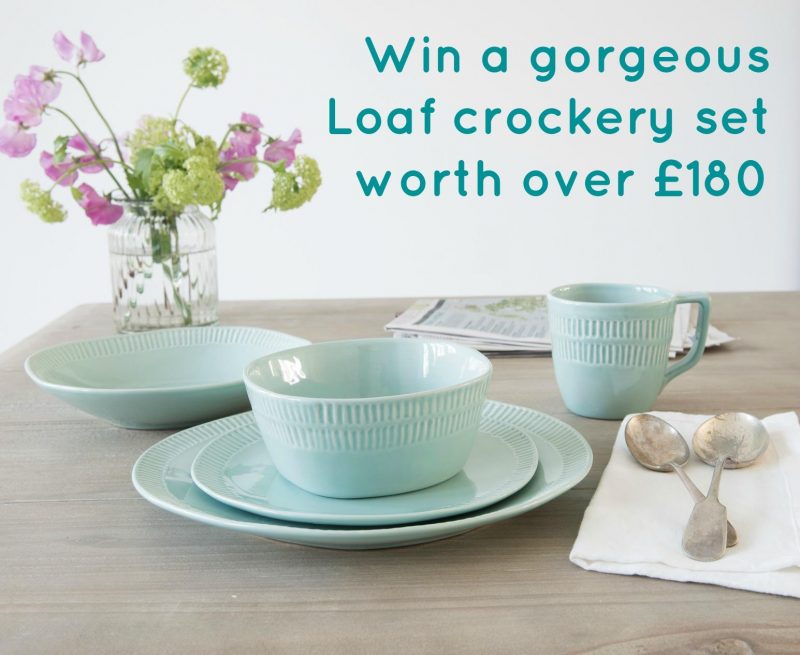 About 15 years ago a friend gave me a set of four dinner plates from a shop called The Pier. They were really beautiful – a dark red colour covered in swirly floral patterns. I loved them and was terrified of breaking them, so inevitably the first time I used them I chipped one. A white chip really shows up on a red plate.

After that first chip though, they seemed to take on an indescruitble quality – we used them every single day, they moved house with us often, and all four remined intact. Until one day just before Christmas. Belle was washing up, and accidentally dropped one into the sink, where it promptly broke in two.

She was horrified, terrified that I was going to be cross. (I wasn’t, it was just an accident.)

It got worse when we discovered that the plate had actually fallen onto a second one, hidden below the surface of the water, and that that one had broken in half two. All those years and there we were, half of our plates taken out in one soapy hand incident.

Still, you can’t let yourself get down in the dumps really can you? They were just plates after all, it wasn’t like one had dropped on the floor and chopped off Belle’s foot. Perhaps it was a sign. A sign that it was time to move on, and take the next step on our crockery journey.

I started browsing online for replacements, and quickly realised that there is a LOT of ugly crockery out there. I wanted something with a hand made feel, slightly rustic, with a bit of colour, but simple too – elegant. Like me. (The elegant bit, not simple.)

Eventually, after a lot of blood, sweat and tears, (of the metaphorical kind), I stumbled upon Loaf’s ceramics collection. I’d not thought about Loaf for plates – I always just associate them with furniture. More specifically, with the BED OF MY DREAMS.

Yes, that’s a yellow crush velvet bed. Apologies now if your own bed seems RUBBISH. It’s because, in comparison, it is.

Loaf do four different ceramic ranges at the moment, and it was a difficult choice between two for me. In the end I opted for ‘Kilny’, because that sounded like a very cute name for a range of crockery. I imagined the individual pieces within the range having names like ‘Platey’ and ‘Cuppy’. 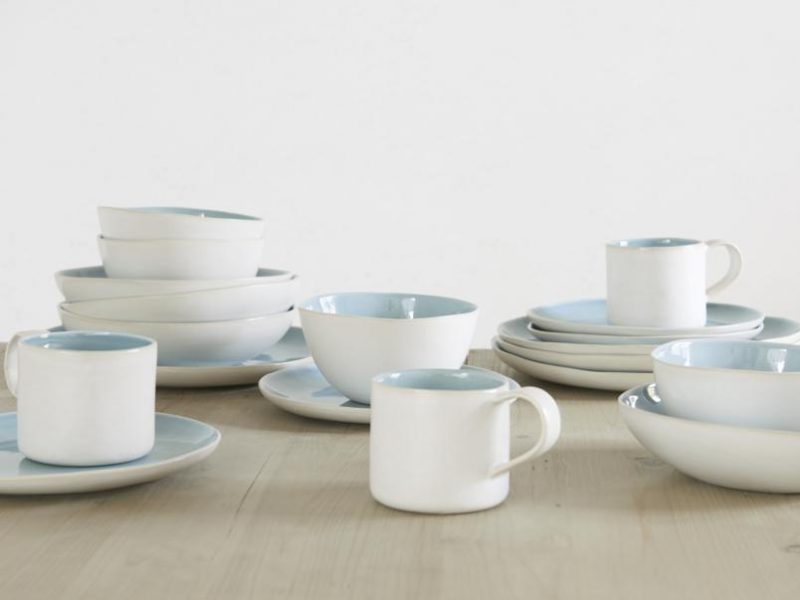 Isn’t it beautiful? It ticks all my boxes – a rustic feel, some colour, but non-fancy. The blue bits are glazed and the white parts are left natural. Don’t worry though, they don’t feel weird – it’s not like that horrid chalky blackboard feel – it’s smooth and lovely and everything I have ever longed for in a crockery set.

Plus they are dishwasher proof, although I think that means a dish washing machine rather than Belle, which is a shame, but fingers crossed this set will take us through the next 15 years at least, by which time I will obviously be a millionaire, living on a yacht, and someone else will have to worry about my plates. 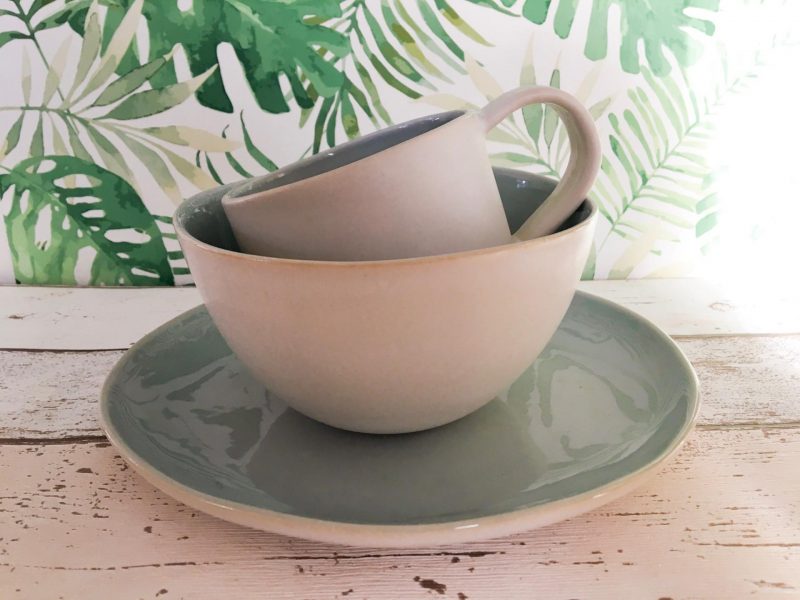 Win a set of Loaf crockery

If your crockery cupboard is in need of a refresh, or you have accidentally smashed up half your plates in one freak accident, then you are in for an absolute treat. The lovely people at Loaf have said that I can give away a WHOLE set of their crockery! How cool is that?? That will include four of everything – mugs, dinner plates, side plates, cereal bowls and pasta bowls.

To enter couldn’t be simpler. First up, visit the ceramics collection on the Loaf website and leave a comment telling me which of the four sets is your favourite. Come back and register your comment in the Rafflecopter widget and then enter as many of the other options as possible. You can tweet about the competition every single day too, for extra chances to win.

The competition will close at 11.59pm on April 16th and is open to UK residents only. 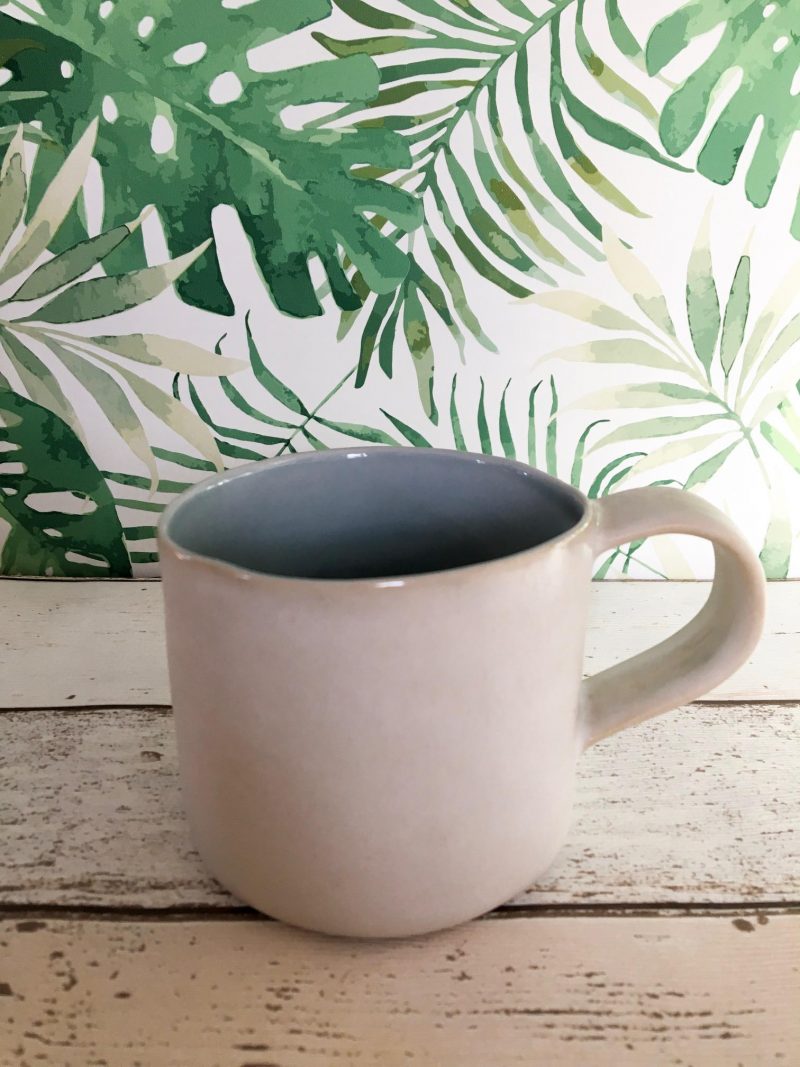