I’m not going to lie, this week has been a toughie. Not least because we’ve been taking part in a challenge set by Robinsons, as part of Nutrition and Hydration Week, to get Belle to drink more.

As I described in my introductory post about the challenge, Belle is not naturally drawn to water as a concept. I’m not sure whether she just forgets, or whether the tap feels just too far away at 14 years old? I had one comment on the first post that made me laugh a lot, and which does sound a bit like Belle:

‘I vividly remember being in my early teens at school,’ commented Alice, ‘and not wanting to drink loads because I couldn’t be bothered to go to the toilet!’

I can totally imagine that. I don’t remember my school toilets exactly being a thing of luxury. Plus at school you kind of want to avoid doing anything that draws attention to yourself, like putting your hand up in class to ask to go to the loo, so that could be a factor too. Whatever the reasons behind it, Belle doesn’t drink enough. I want this to change, and so does Robinsons. Hence the challenge. 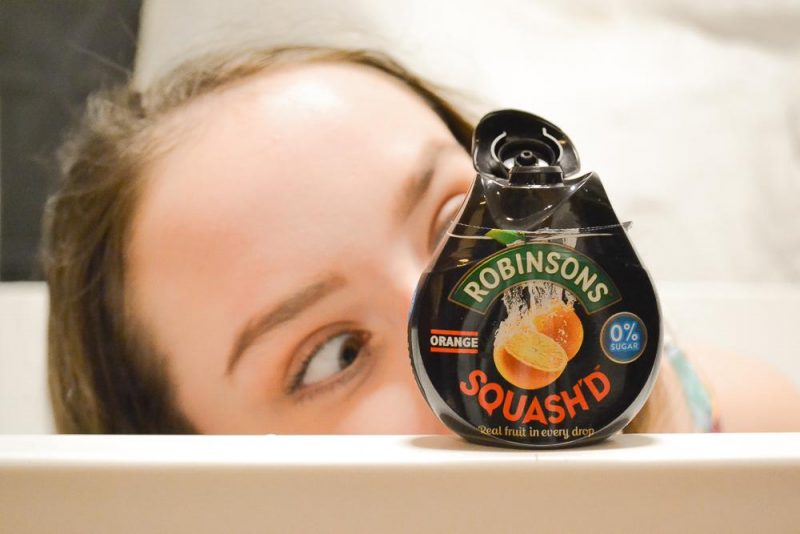 Belle last week, looking intrigued as to what her hydration challenge might entail…

Read on my intrigued chums…

1. Get yourself some Robinsons Squash’d

Robinsons set us this challenge, so it would be a bit cruel not to mention them wouldn’t it? Plus, we do actually love the little Squash’d bottles and have bought them lots of times before. They are basically a really concentrated squash, with enough in each teeny tiny bottle to make 20 drinks. They are sugar free, come in a range of seven fruity flavours and there is real fruit in every drop. We’ve found them particularly useful in the past when we’ve been travelling – festivals, camping, self-catering holidays, that sort of thing.

Belle is of the ‘water is BOOOORING’ school of thought, so having a little bottle of Robinsons Squash’d has helped her to drink more, as it’s so easy to jazz up ‘boring’ water. Plus you can make ace Boomerang videos with them:

Belle is starting Nutrition and Hydration Week as she means to go on. (By making a Boomerang..) 😊 #getsquashd @SquashdUK @DrinkRobinsons #ad pic.twitter.com/jnict8uiKM

You see how cool that is? That’s the very first Boomerang I’ve ever done! (Question: Do you call it a ‘Boomerang’ or a ‘Boomerang video’? I have a feeling that saying it wrong will make me sound HELL OLD, like someone saying they watched a video on The YouTube.)

2. Include some Squash’d in your lunchbox 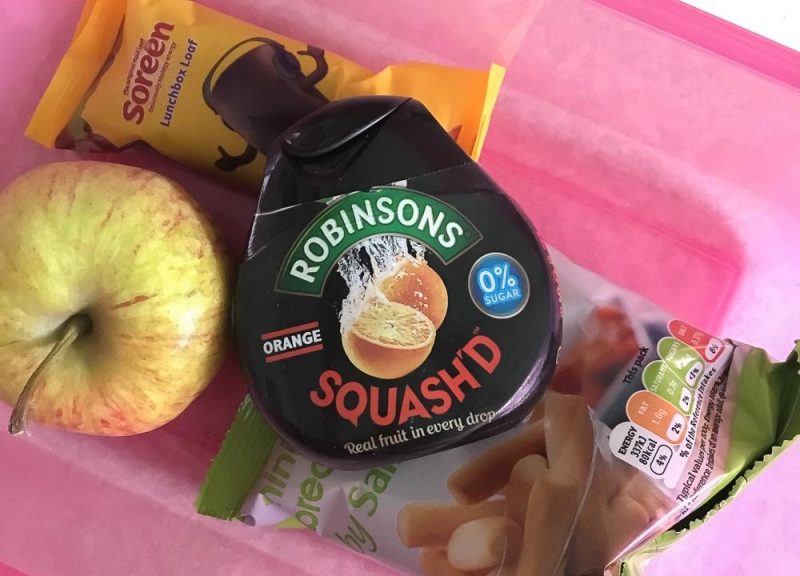 School is a bit of an issue when it comes to getting Belle to drink more, chiefly because I’m not there to remind her. Even if she does remember to take her water bottle, half the time she’ll bring it home again completely full.

‘I do mean to drink at school,’ says Belle, ‘but I just sort of forget. Having the Squash’d in my lunchbox has definitely helped me to drink more, as it acts as a reminder every time I get something to eat.’ It’s also handy when she forgets to take her main drink bottle with her. ‘We have water fountains at school,’ says Belle, ‘but they’re a bit grim to be honest, and I don’t really like the taste of the water. Having the Robinsons Squash’d has been handy as I can add it to the school water and make it taste better.’ 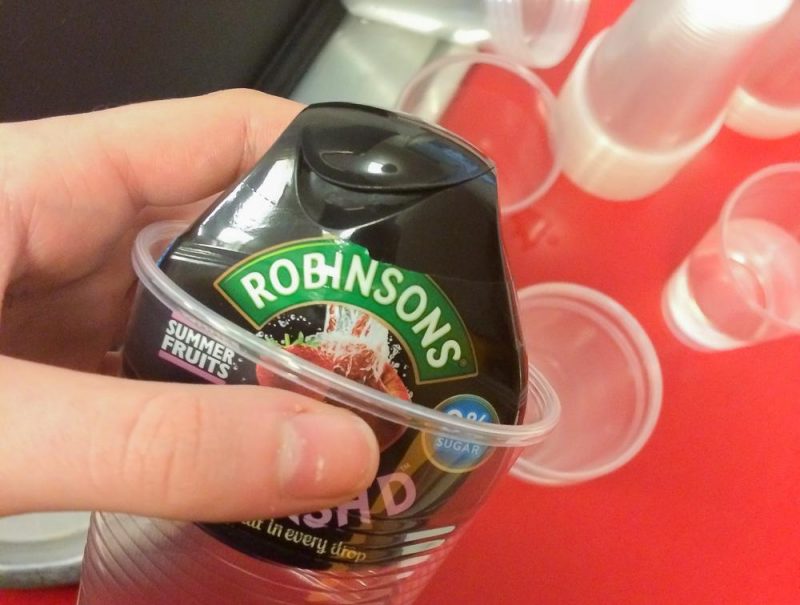 There are seven of them, so it shouldn’t be difficult. ‘Summer Fruits is my favourite flavour squash,’ says Belle, ‘and so I’ve definitely drunk the most of that one. My mum is always buying weird flavoured drinks at home, which is annoying. I really liked having my own bottle of Summer Fruits Squash’d to keep with me. I always drink more of something when I actually like the taste!’

But has drinking more made a difference to how Belle feels?

‘I do normally get headaches a lot, and feel sick,’ admits Belle. ‘My Mum is always saying ‘it’s because you’re not drinking enough’ but I’ve never really believed that drinking could make that much difference. Turns out it can. Oops.’

Have a look at this video – I would say she seems to have plenty of energy, wouldn’t you?! Her sister Bee was there when she made this – she always gets a bit excitable when Bee is around, like a puppy around its favourite human. (My favourite bit is near the end where she clearly remembers, briefly, how I told her that landscape was better for videos. In thinking about that though, she loses concentration, and nearly drowns…)

4. Get a water tracking app

Belle has been wearing a FitBit this week with a built in water tracker, but you can get free water related apps that do the same job, and will remind you when it’s time to drink.

‘Having the water tracker thing on my FitBit has helped me to drink more,’ says Belle. ‘I am on my phone quite a lot, [surely not??], and so it’s handy having the reminders, as sometimes I do just forget to have a drink. It’s useful too to be able to see at the end of the day how much I have drunk, and I do notice the difference in how I feel on days when I’ve drunk more. It’s easy to see that on the good days I feel more energetic and less headachy and sick.’ 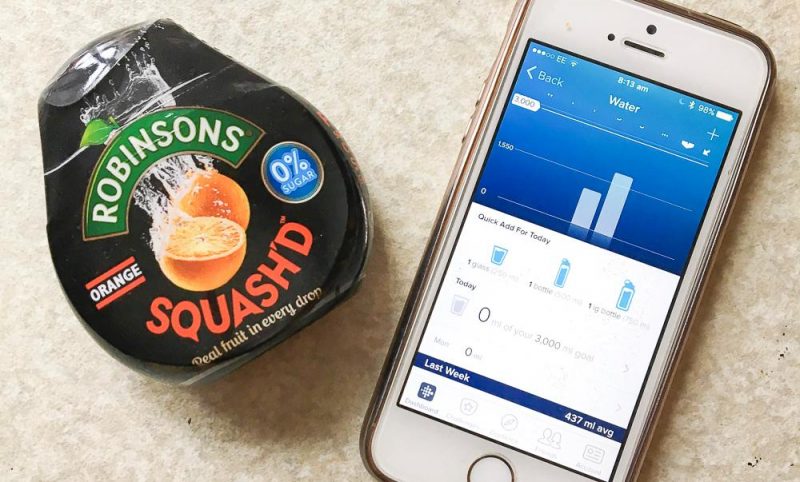 Teenagers are fussy right? The temperature of her drink is important to Belle and can make a big difference to how much she drinks. ‘I saw a hack online,’ says Belle, ‘that I do before bed, when I remember! Half fill a plastic bottle with water, and put it in the freezer, on its side, overnight. Top it up with water in the morning, (and Squash’d!), and it will melt gradually during the day, keeping your drink really cold.’

This week we also tried sending her to school with some iced water in our Sho bottle. It’s one of those insulated bottles that keeps cold drinks cold all day. It sounds like a really simple thing, but Belle also drinks more if we have straws for some reason. Don’t ask me why, but if it works… 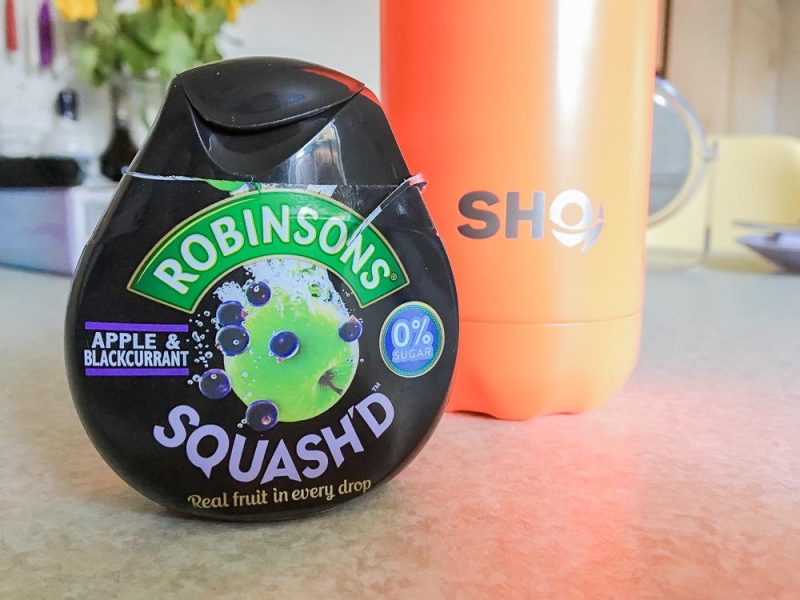 If all else fails, perhaps you need to think outside the box a little? Maybe you could sit your teenager in a bath full of squash and tell them they can’t get out until it’s empty? No, you’re probably right, not a great use of resources.

‘I really like the idea of earning rewards by drinking more during the day,’ agrees Belle. ‘Five pounds a day should just about do it?’

What top tips do you have for getting teenagers to drink more water? 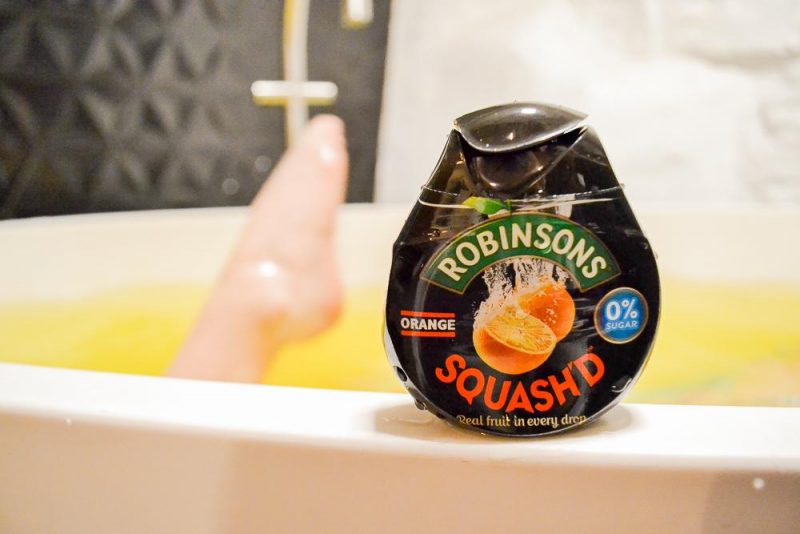 I’m working with Robinsons Squash’d in a paid relationship. Find out more about Robinsons here https://www.robinsonssquash.co.uk/.