This dairy free pineapple and coconut smoothie recipe is inspired by my recent trip to Vietnam.

Not only does it taste amazing but it looks pretty cool too.

When Dole asked me if I wanted to try out their new frozen fruit packs then, I thought it might be fun to try and create a coconut smoothie recipe that you could actually drink out of a coconut, should you felt so inclined. 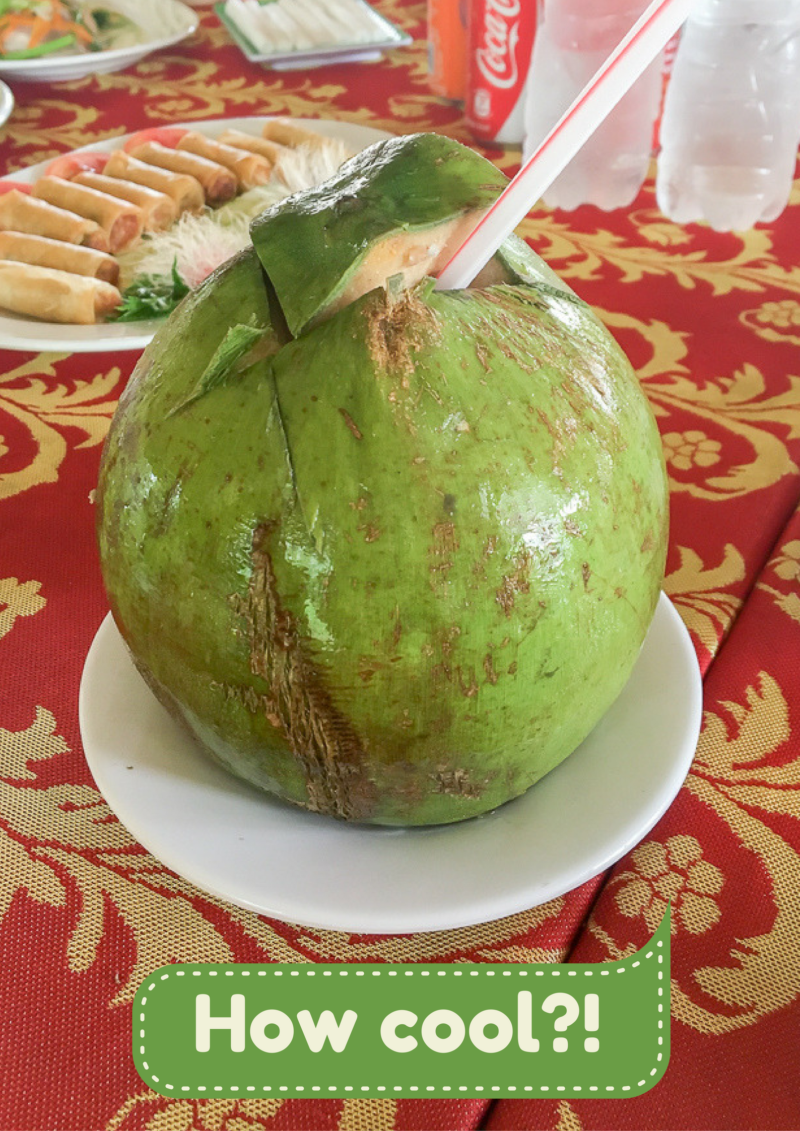 Of course you can just make it and have it in a glass like a normal person, but where would be the Instagrammable fun it that?! I realised too, when I came home and found myself ordering a massive cheese platter when out for lunch with a friend, that I pretty much ate no dairy in Vietnam, so I figured a dairy free smoothie recipe would fit well.

How to break a coconut in half

This was the challenge.

I’ve won coconuts at fairs before, but I’ve only ever eaten them by smashing them up with a hammer. You can’t display a smoothie just by pouring it over a smashed up coconut can you?

I needed something a little more professional looking.

I watched a few YouTube videos and the best approach, should you not happen to have a circular saw lying around at home, (which I don’t), seemed to be to tap around the circumference of the coconut with a hammer. (Drain the coconut water out first, or you will make a mess.)

I did this for about three or four minutes and started to get worried as nothing was happening. I had bought three coconuts, just in case anything went wrong with the first one, but I didn’t especially want to fail at the first hurdle. I kept on tapping and lo and behold, just at the point when I was ready to throw it on the floor and stamp on it, a crack started to appear! I kept tapping, following the crack, and look what happened!

I felt pretty pleased with myself. 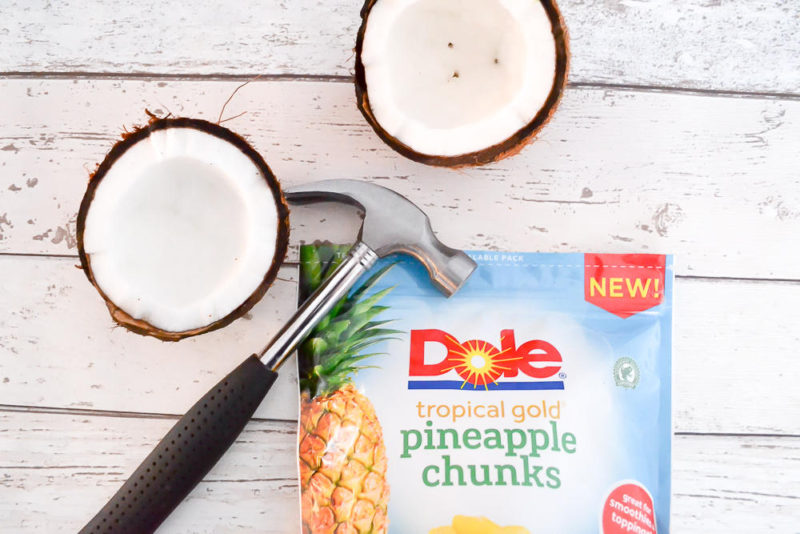 Then the recipe – this is a piece of cake in comparison.

How to make a pineapple and coconut smoothie

It’s pretty straightforward to make a dairy free pineapple and coconut smoothie, and the beauty of smoothie recipes is that you can be really flexible with them and adapt them according to personal taste or whatever you have in the fridge. For this recipe I used the following: 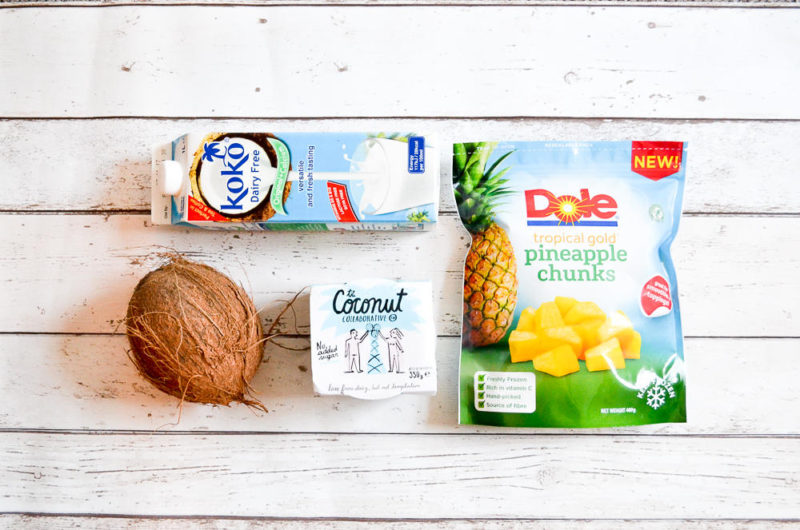 I was making my smoothie just for me, so if you want to make it for more than one person you’ll need to scale up the quantities.

Start with a big dollop of coconut yogurt in the bottom of a regular sized Nutribullet cup. Add a good handful of Dole frozen pineapple chunks. The benefit of using frozen fruit, other than that you don’t end up with mouldy fruit in the fridge because you forget to use it, is that you don’t need to add ice – the frozen fruit thickens the smoothie up a little and makes it lovely and cold. 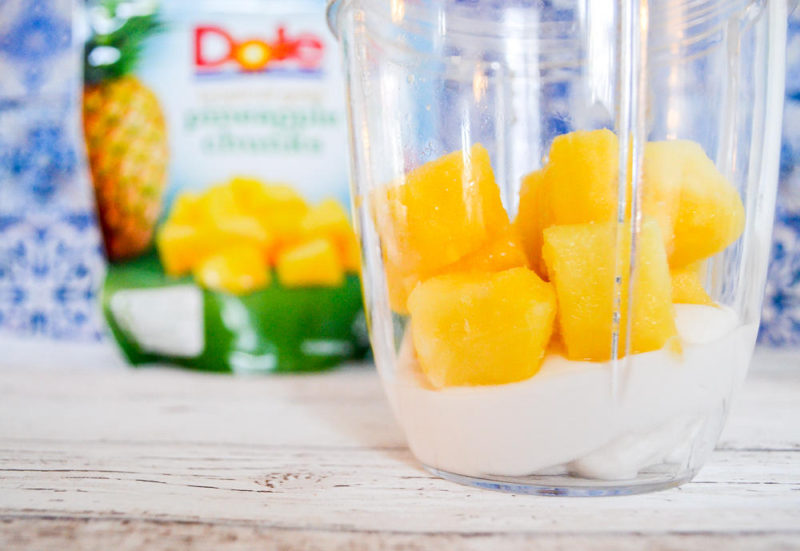 Top up your cup to around the ‘max’ line with coconut drink. I used Koko dairy free but you could use whatever you like. You could even try using the liquid you drained out of your coconut earlier if you are going for the full tropical experience. 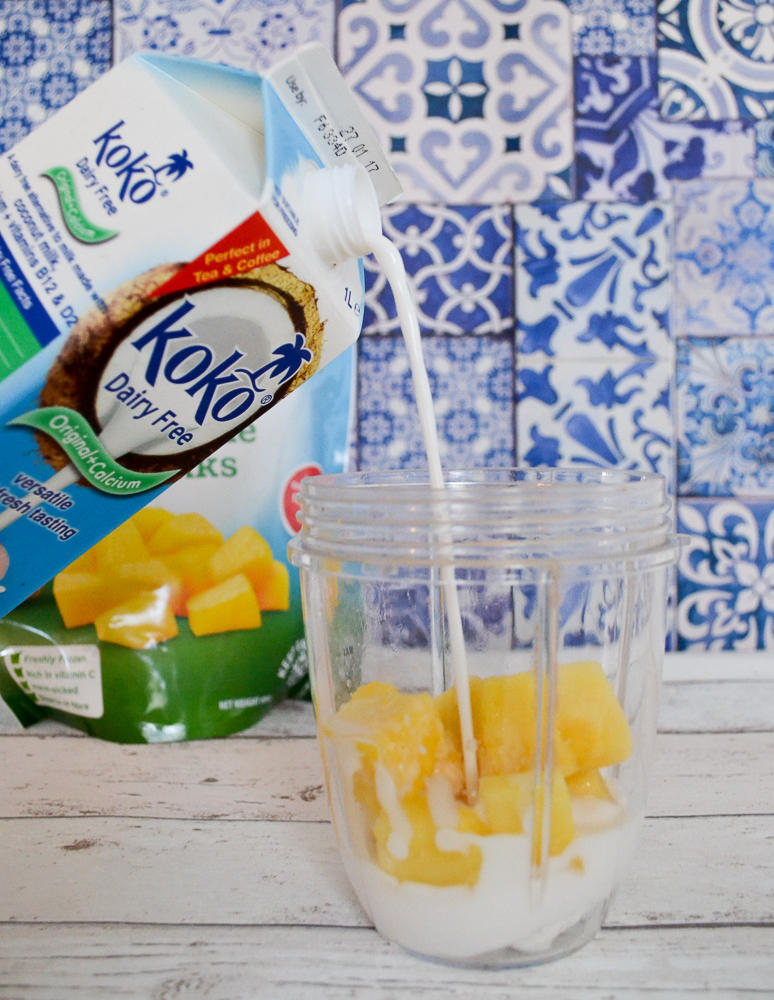 Then just whizz it up!

Now is the fun bit. If you’re just going to drink it, like a regular person, then go ahead! It’s yummy isn’t it? I was worried about the balance between the pineapple and coconut flavours but I think this is just about perfect. The Dole frozen pineapple gives it a lovely fresh, clean flavour and chills it too. This would be lovely with a cheeky splash of rum.

If, like me, you prepare all your food and drink with the sole purpose of taking nice Instagram pictures, then now’s the time to pour your pineapple and coconut smoothie into your coconut. (If you’re using the half with the three holes then don’t forget to plug them with something. I used blutac. Please don’t take that as a recommendation.)

I decorated my pineapple and coconut smoothie with tropical straws and toasted a little bit of flaked coconut to garnish. I did this just by tossing the coconut in a dry frying pan for about five minutes. 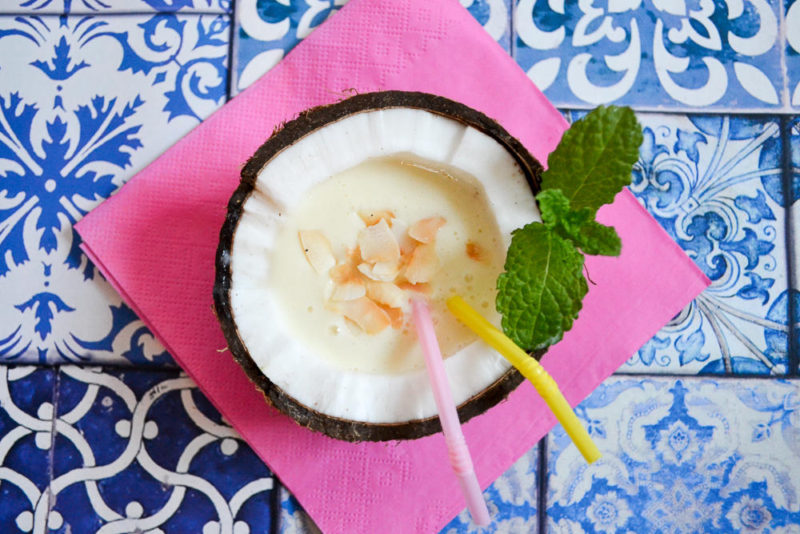 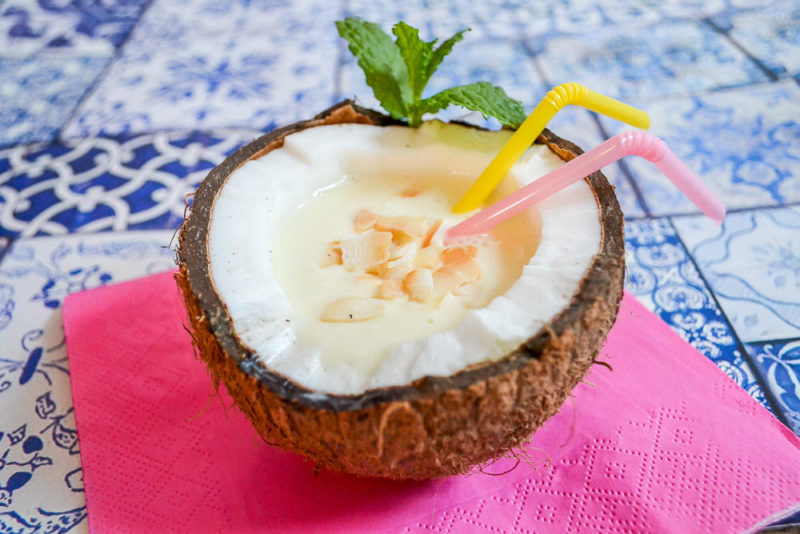 How to win your own Nutribullet

If you’d like to win your own Nutribullet, so that you can easily whizz up a dairy free pineapple and coconut smoothie whenever you fancy it, all you need to do is come up with your own easy smoothie recipe, inspired by your own travels. Take a picture of your smoothie and post it on Instagram with the hashtag #MYDOLESMOOTHIE.

I’ve posted about the competition here on my own Instagram, to inspire you:

It doesn’t have to be a super fancy recipe, just something that you love, and that makes you think of a favourite holiday or adventure. The winner will be chosen based on a combination of creativity, quality of photography and the story behind the recipe. The competition will close at midnight on 31st December, so you have the holidays to get creative. (Full T&Cs at the bottom of this post.)

Like the look of my dairy free pineapple and coconut smoothie recipe? Why not pin the image below for later? 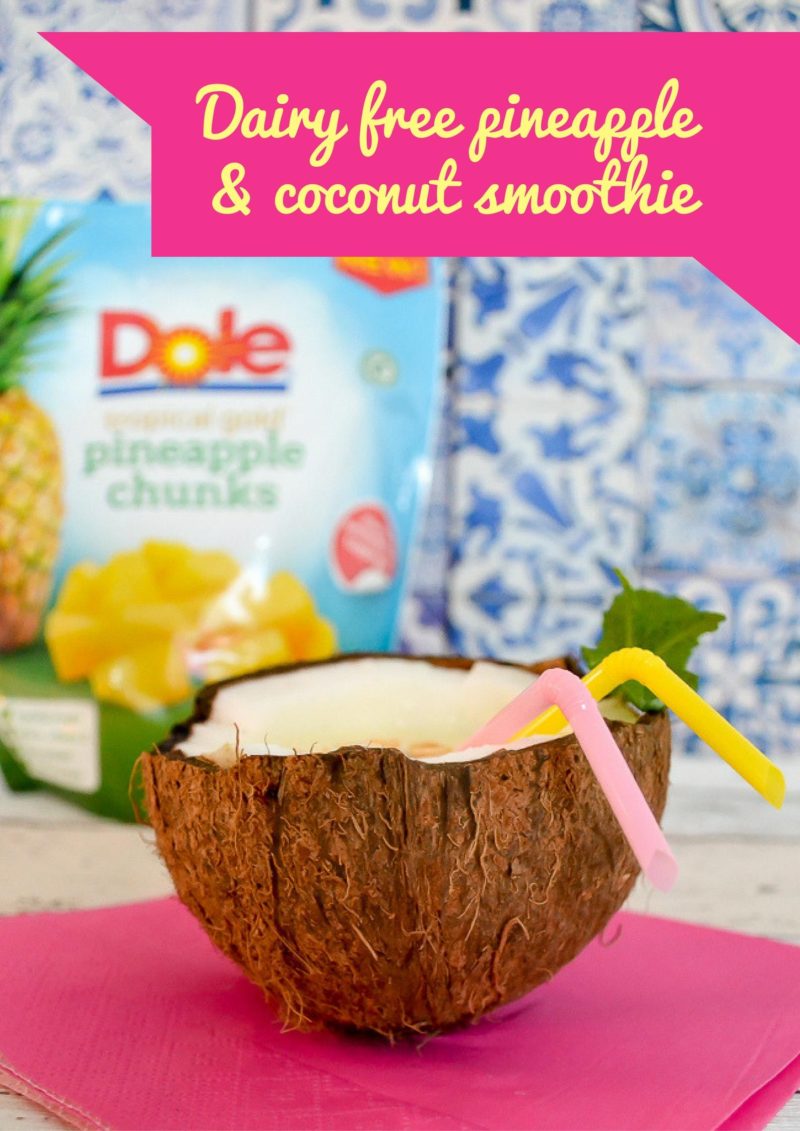 Produced in association with Dole.