Today I’m doing a bit of a tech review, looking at the Philips driving video recorder.

Do you ever do that thing when you’re driving, when suddenly you feel super tired and your eyes become harder and harder to keep open? Around 2.30pm in the afternoon is my weak spot and a few times this year I’ve had to pull in somewhere for a power nap. It’s a bit dull for Belle when she’s with me and has to sit watching me sleep in a service station for twenty minutes, but I figure better that than driving her into the back of a lorry.

The weird thing about getting tired while driving, (or generally), is that often you don’t notice it’s happening. You forget that you’ve been on the road for two hours and you go into that weird semi-awake state of mind where you can convince yourself of things that aren’t actually true.

‘Oh no it’s totally fine to close my eyes on the motorway for a minute or two,’ you find yourself thinking, ‘because I have that magical goat that sits on the dashboard to take over when I get sleepy.’

Heads up guys, the goat is not real.

Instead of a magical goat though, you could get yourself a Philips driving video recorder.

The whole ethos of the Philips driving video recorder is to give you peace of mind whilst driving. Philips describe it as a ‘personal road safety guardian’. 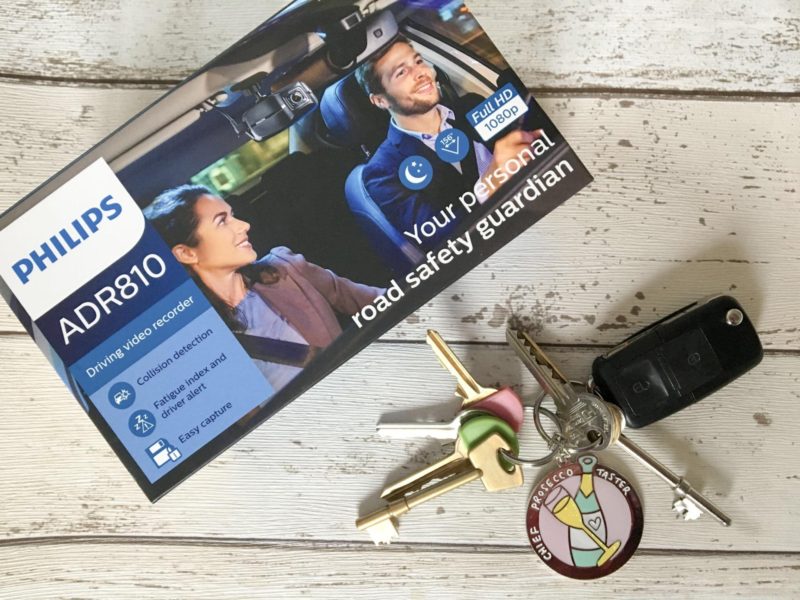 It’s dead easy to set up. Even I managed it and I get scared of new remote controls and have to get Fiance to switch on the Apple TV because I don’t understand it.

You get the recorder itself, a bracket to fix it to the windscreen and a lead to plug it in. 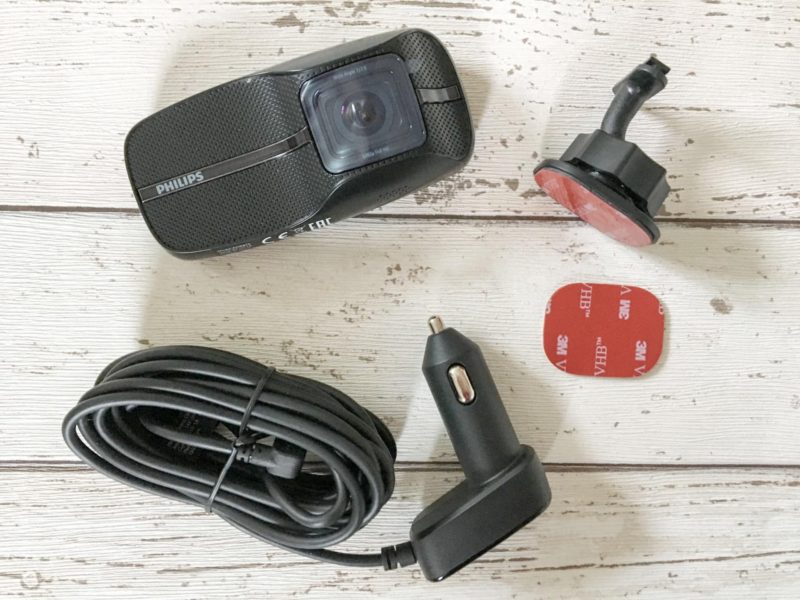 I was worried that having a video screen on the windscreen might be a bit distracting, but it’s really not. I positioned it just behind the rear view mirror, so you could still just about see the screen, but it wasn’t just stuck somewhere on its own. You’re used to seeing something vaguely in that area when you look up, so that worked for me. 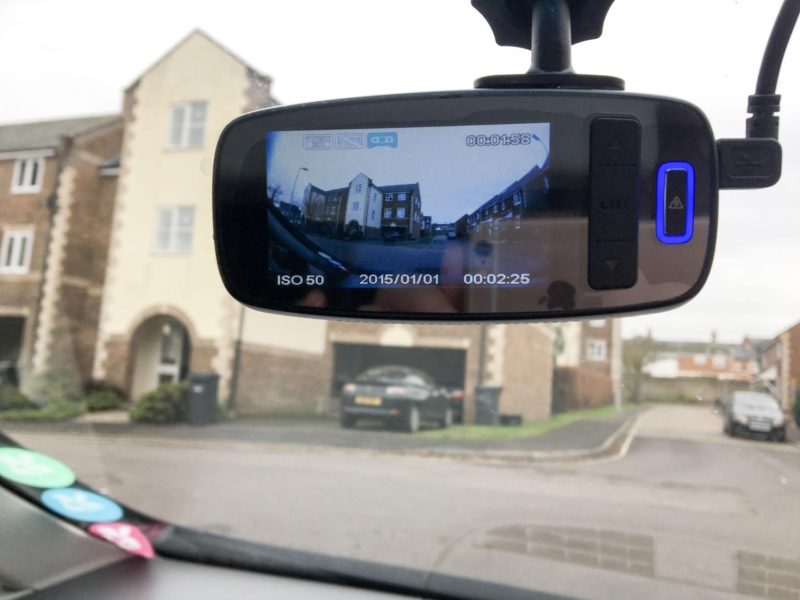 The recording starts as soon as the recorder is plugged in and you start the engine. It’s all pretty intuitive to set up, but I did also find the user manual online so that I could just be extra sure that I was doing it right.

Press ‘OK’ and you access the menu options. In here you can do things like set up the date and time and switch various functions on and off. Don’t skip the date and time bit! If you do have an accident and want the video evidence, you want it to show the correct details to help with any insurance claim. 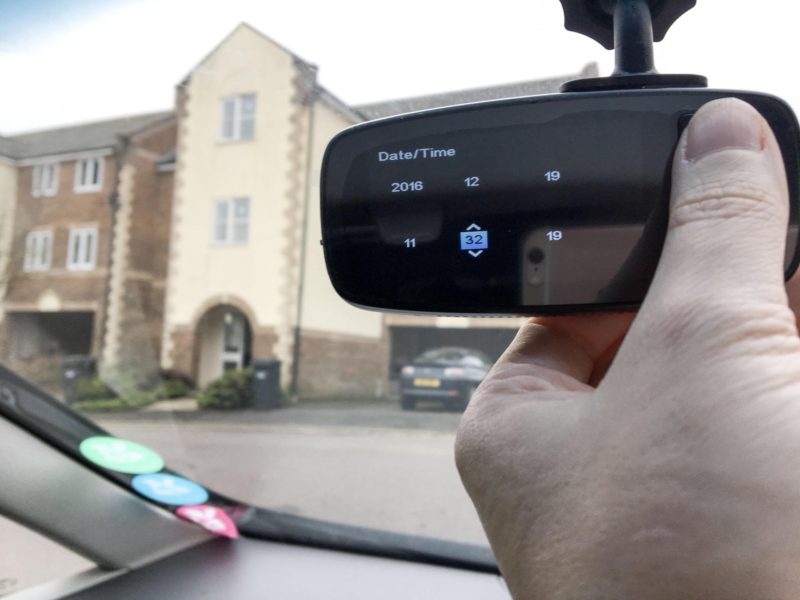 If you do have an accident or altercation and want to make sure your video gets saved permanently, there are two ways to do it.

If the Collision Detection function activated, (and why wouldn’t you?), the Philips driving video recorder automatically detects a collision and creates an emergency video file. The emergency video clip will show 30 seconds before and after the event detection and gets saved into the Emergency Records folder.

You can also create an emergency recording manually, using the ‘EasyCapture’ button. There is one of these on the device and another one on the end of the charger that plugs into the cigarette-lighter adaptor. This could be useful if you’ve been involved in an incident and want to record the aftermath, or are having problems with an aggressive or threatening driver. I do a lot of driving on my own and this function is very reassuring. I particularly like that you can just reach down to the charger to press the button and so could do it very discreetly if you needed to.

The driver fatigue function is switched on and off from the ‘OK’ menu I talked about earlier. Now obviously the Philips driving video recorder can’t know specifics about how well you slept or how many coffees you’ve drunk that day, but it makes a pretty educated guess about how tired you are based on things like how long you’ve been driving and the time of day.

It works on a number scale and when you hit 80 it will let you know that you really need to stop for a rest. The green number will turn to yellow when it hits 60, warning you that you might want to stop soon if you have the chance. I think this function is really useful as a reminder, because it’s so easy to slip into that driving trance and forget how long you’ve been on the road. 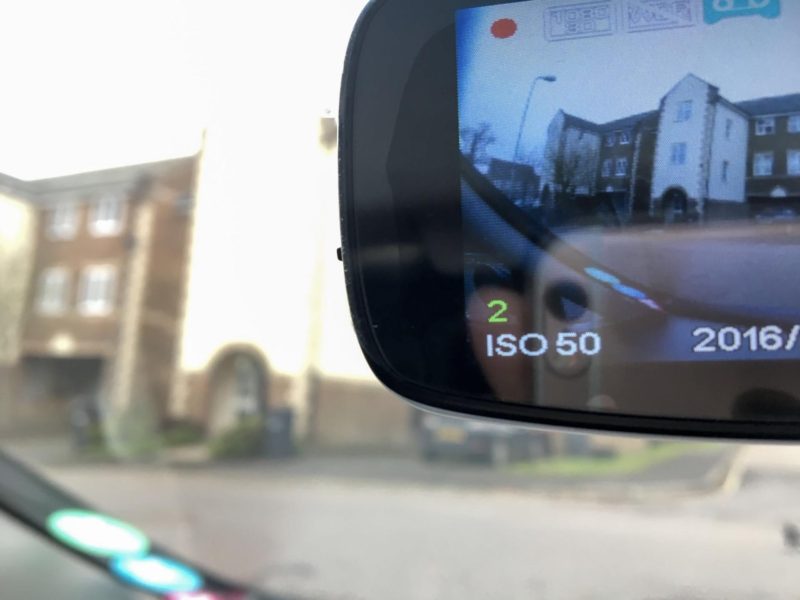 When you get home, (in my case you can see we have a very sexy car port), the recorder automatically switches off when you unplug the charger. There are manual ways to switch in on and off too, so you’ve haven’t completely handed over control.

I’ll definitely feel reassured having the Philips driving video recorder set up in our car. If you worry about personal safety on the road then it’s certainly worth checking out. 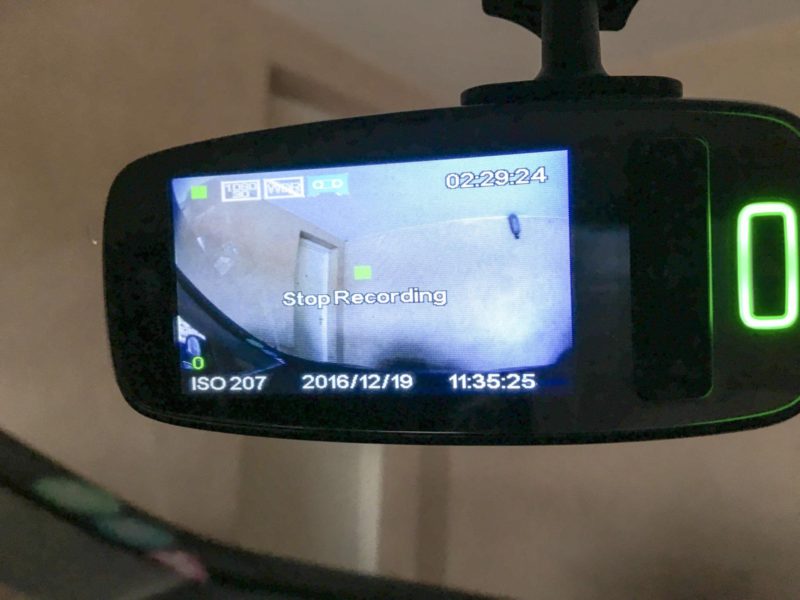 We were sent the Philips driving video recorder for the purposes of this review. All opinions are my own.