I was going to start by saying something like ‘I love Cornwall’, but then I realised that’s probably about the most obvious statement ever. I mean, have you ever heard anyone say ‘Oh God no, I hate Cornwall. All that beautiful coastline and those picturesque fishing villages? Not my thing at all.’

So let’s take it as a given that Cornwall rocks, and I’ll just tell you about the hotels we stayed in.

Our first night was spent at the Royal Duchy Hotel in Falmouth. We were very pleased to have been invited to Falmouth actually, as my Dad and step-mum moved there last year, plus my step-sister and her family live down there, so we could get to hang out with them for a bit, which is always nice. I have a rather adorable two year old niece down there, who is just about the sweetest thing you’ve ever seen, so most of our hanging out time was really just me gazing at her.

Safe to say it was FANCY with a capital FAN.

It felt like a cross between one of those classic seafront hotels, with the big picture windows overlooking the sea, and a luxury city hotel, with sleek furnishing and top notch finishes. But the right bits of both. The communal areas were cosy and friendly, and the service was impeccable. The staff made a real effort to chat and to make sure you had everything you needed, and we spotted quite a few older people dining on their own in the evening. I always think that if you have regulars who are happy to come back again and again, on their own, then that says a lot about the quality of the service.

First things first though, we went up to our room and I did a little tour. I have to remember to take photos and make my videos as soon as we arrive at a hotel, as we are so messy when we’re away – within about five minutes it looks like six suitcases have exploded in the room, and that’s not aspirational for anyone.

I made fiancé wait outside in the corridor, hid our bags in the wardrobe, and made this for you:

Did you enjoy that? Wasn’t the bath TV ace?!

After a nose around the room we went down to the lounge, looking out over the sea, for afternoon tea.

‘Two full afternoon teas,’ we said to the waitress. (I was with fiancé, not just being greedy.)

‘You probably won’t want two,’ she said, ‘not if you’re having dinner later too.’

We were unsure, as the full afternoon tea was only £14, which seemed pretty good value already, but we went with her suggestion and were so glad we did as it was huge! Three tiers of sandwiches, scones and cake – we couldn’t finish it all even though we shared. Plus we may have had a cheeky glass of champagne each. Fiancé even went as far as to say that he enjoyed it more than when we went for afternoon tea at the Ritz for Belle’s birthday, which is a pretty bold statement. 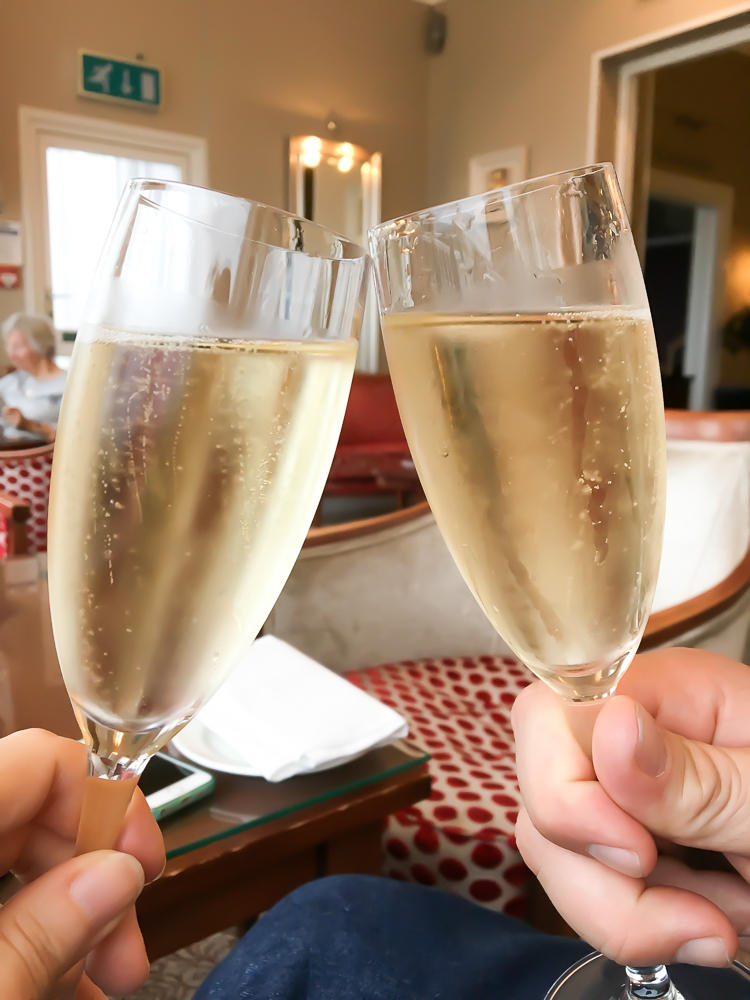 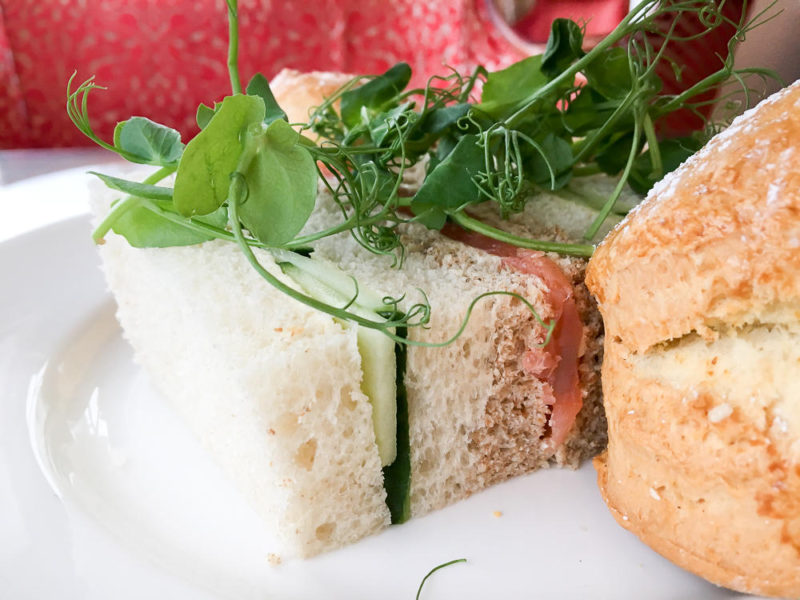 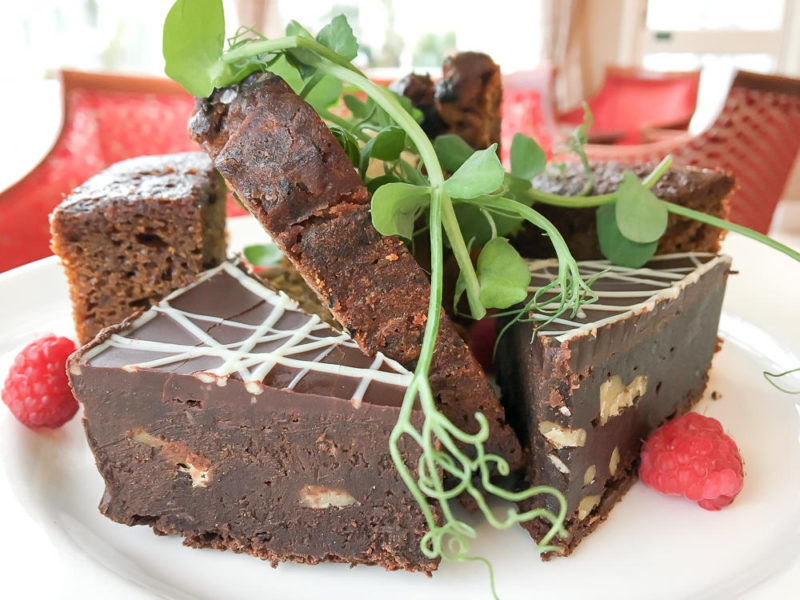 We had just a few hours then before dinner, which was a slightly worrying prospect. We kind of wanted to try out the spa facilities and the pool, but weren’t sure if that might be a bit risky after such a vast amount of cake, so we opted instead for a short walk along the seafront and then lying down on the massive bed and watching Pointless. Classic hotel afternoon fun times.

Barely had we had time to digest our scones and it was time for dinner. In the spirit of the afternoon tea, dinner at the Royal Ducky Hotel was delicious, as were the pre-dinner cocktails, although we didn’t quite have room to squeeze in a pudding.

It’s worth mentioning at this point the pea shoots.

As it happens, I really love pea shoots, but I wonder if the Royal Duchy had accidentally over-ordered on pea shoots that week, as they were on everything. No kidding, every single meal I had, including breakfast, had pea shoots on it. Have a look back at the plate of cakes… You see? Pea shoots! It’s not a complaint, I just thought it was funny.

We woke up the next morning to the sound of the sea.

I get a bit stressed out in hotels in the morning and I think fiancé finds me rather tiresome. I get very focussed on breakfast, and getting the timings right is a very delicate operation. I’m not hungry when I first wake up, so I have to make sure I’m awake early enough to build up an appetite, but not too early that you don’t get the treat of the lie in. I’m also a real square when it comes to check-out times, whereas fiancé has a much more laid back approach and sees check out times as more of a guide than anything set in stone. Plus he goes deliberately slowly to wind me up. 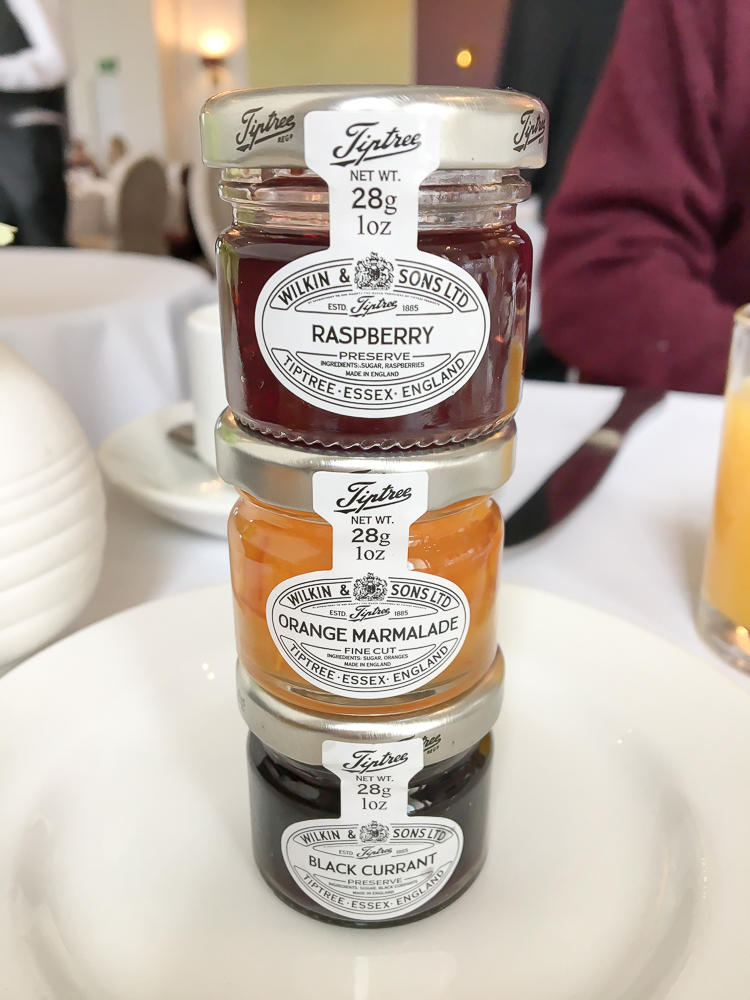 After breakfast and checkout (just about on time) we headed over to Constantine – a little village about 20 minutes away – to visit the Constantine Stores. From the outside, Constantine Stores just looks like a regular village shop, but inside it’s an Aladdin’s cave of wine and spirits. Seriously, there is more gin in this place than you can shake a stick at. I wanted to buy it all, just for the pretty bottles if nothing else. 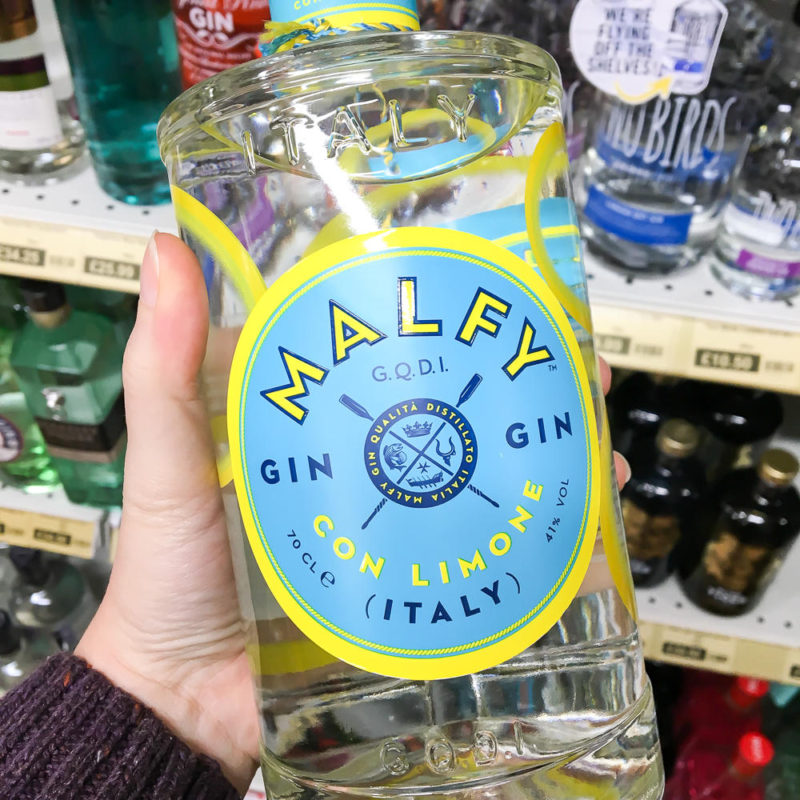 We tried some really amazing flavoured vodkas too. Normally flavoured vodkas are a bit naff, but we tried a Christmas one, a salted caramel one and an amazing  after dinner mint flavour, which was like drinking liquid Bendicks mint. PURE LUSHNESS.

Constantine Stores also has loads of cool mixers and tinctures and what not. These would look ace in your drinks cabinet: 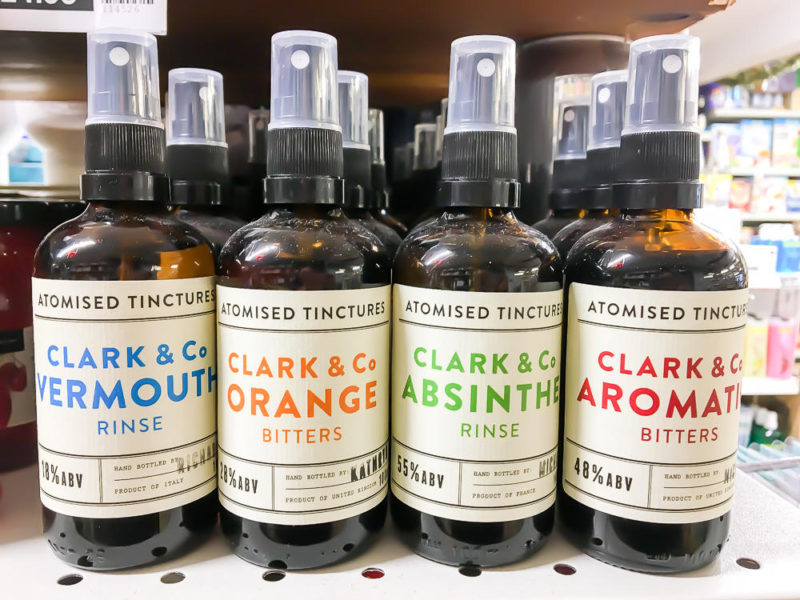 We then went to The Potager, which is a garden and cafe, to meet up with the family. The food there was amazing, and it’s well worth a visit if you’re in the area. They had plenty of things for children to play with too, with some board games and a table tennis table. I think fiancé was secretly impressed that I wasn’t as crap at table tennis as he was expecting. I’m not saying I was good, just not as rubbish as you might think.

Also, I couldn’t resist this door picture. When is a door not a door and all that. 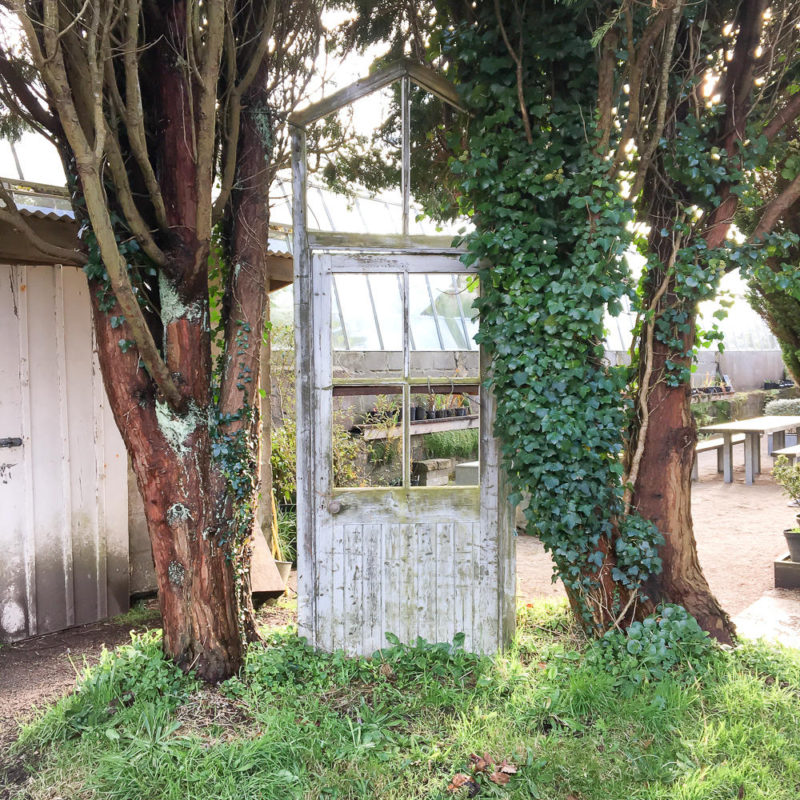 After a bit of family time, we headed towards St Austell for our second hotel of the weekend – the Carlyon Bay. We checked in and were told that our room number was 114. We headed up to the first floor and followed the corridor – 110, 111, 112, 115…

‘Where’s 114?’ I asked fiancé, worried we were being filmed for a strange reality TV show. ‘There’s only the Duchess State Room between 112 and 115.’

‘Just try it,’ he said, rolling his eyes.

It worked, but the room was vast, and I spent the first half an hour or so convinced that we had accidentally let ourselves into someone else’s room. When the phone rang and someone asked for me I was sure I was going to get told off for going into the special room. Fortunately it was just Josie from the spa, confirming my treatment for the next morning.

My first room tour seemed pretty popular, so I stuck fiancé out in the corridor again and did another one. Pretty swish right? I was dark by the time we arrived, so sorry if it’s a bit gloomy.

The Carlyon Bay and the Royal Duchy are part of the same small group of hotels and they were similar in lots of ways – the staff at both were excellent, and the atmosphere was very relaxed and welcoming. They were different too though. The Royal Duchy seemed a little bit traditional, and made a good base for exploring the local area. With the spa and golf course, the Carlyon Bay was more of a resort hotel, but it still had that classic old school glamour. It did seem to have a slightly younger clientele too, with a mix of groups on golf and spa breaks alongside the families and couples. 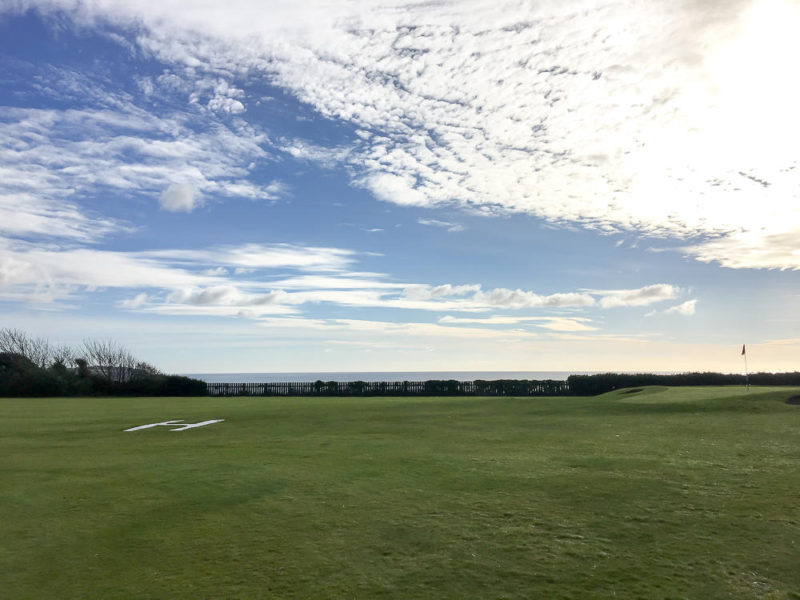 Yes, I’m pretty sure that is a helipad.

The food in the evening was excellent. I had scallops with a pea purée to start – mainly just to see if I got more pea shoots. I did! They were far less prolific at the Carlyon Bay though, which I was actually rather sad about. I followed it up with duck and then a chocolate and rum and raisin cheesecake. I may have had a glass of wine or two. Just for research purposes.

In the morning I was booked into the Carlyon Bay spa at 8.30am for a facial. This fitted in rather nicely to my breakfast plan, as it meant I had to get up early and so had plenty of time to build up an appetite for breakfast. It also meant I woke up early enough to see the sun rise over the sea, which was rather special. 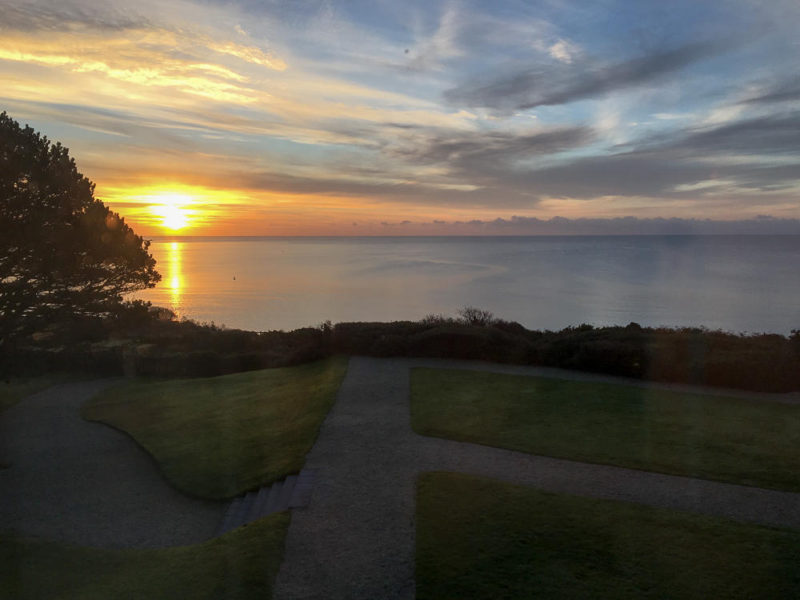 I’ve never had a facial before.

I’m not sure what I was expecting, but I definitely wasn’t expecting to have my feet rubbed. I might have made a bit more of an effort (i.e. had a shower) if I’d known. It was really lovely though. They had this fantastic ceiling full of twinkly lights that changed colour, so you felt like you were lying out somewhere remote in the middle of the night gazing at the stars.

From the Carlyon Bay hotel we didn’t want to go straight home, so we went to visit Fowey. (Pronounced Foy to rhyme with Joy.)

Fowey was stunning – a proper, classic Cornish seaside town. It was one of those little towns set on a steep hill, full of winding passageways. It meant that you could be anywhere in the town and not really be able to see anything else, and we ended up going up and down steps and winding our way between tall houses, catching glimpses of the sea, trying to figure out where we were. 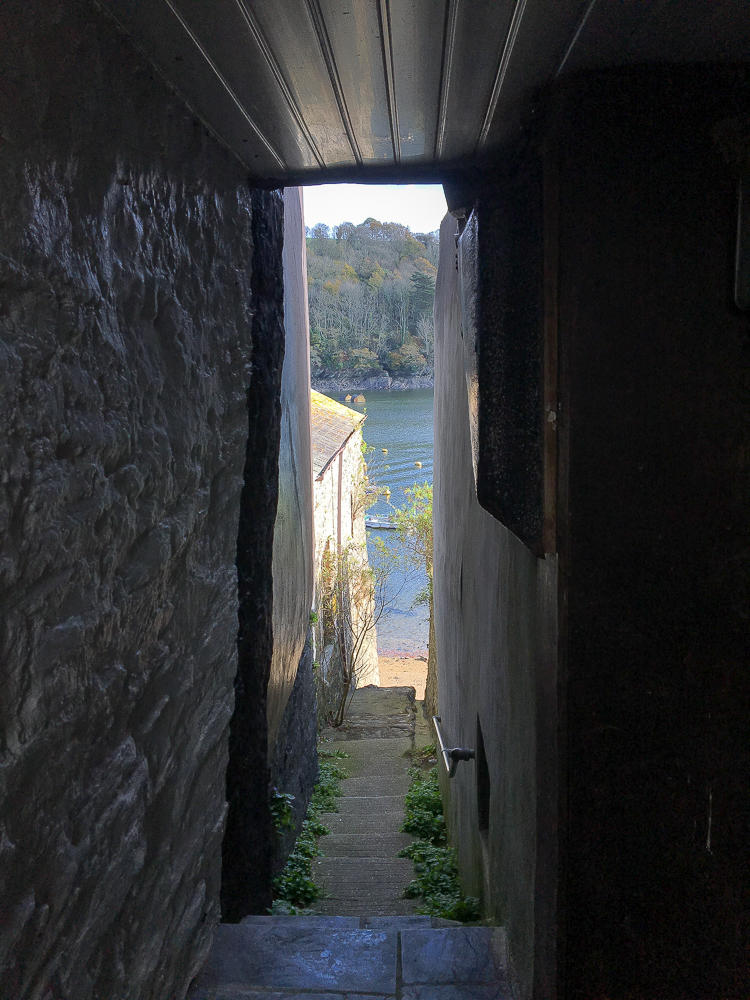 We did manage to find the church. Fiancé and I have a bit of a thing for exploring churches, and like to give them a rating out of five based on architecture, stained glass, impressiveness of the organ, that sort of thing. Fiancé gave Fowey church a very impressive five stars. I went for a 4.5. Well worth seeking out.

Overall then, a wonderful weekend in Cornwall. We’d heartily recommend both the Royal Duchy and the Carlyon Bay hotels. 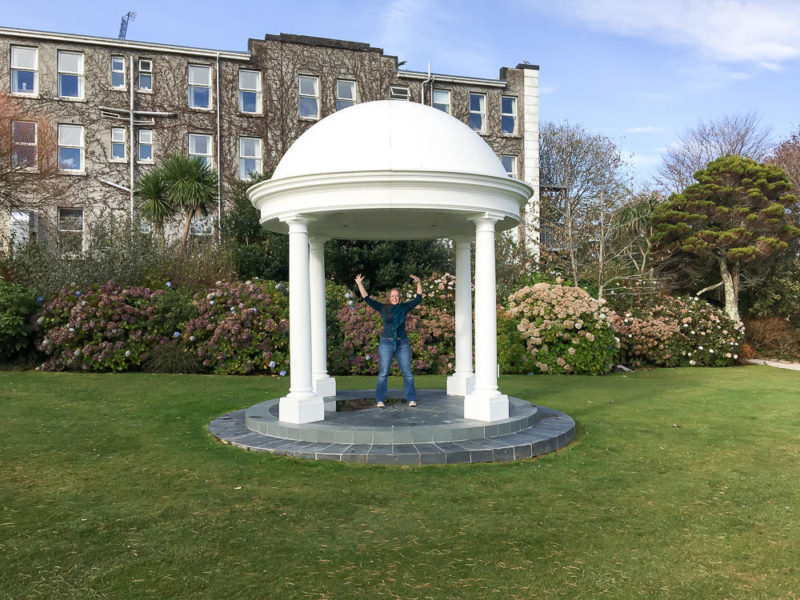 We were guests of the Royal Duchy and Carlyon Bay hotels for the purposes of this review. All opinions are my own.