A funny and unusual thing happened this morning. I accidentally sent Belle to her school cake sale with a batch of home made jam tarts.

I know, I know, it’s about the least slummy thing I have ever done, but in my defence, I didn’t mean to.

Let me set the scene.

I’ve not been feeling very well this week. Belle has been a bit poorly too, so was off school on Wednesday, and yesterday I was feeling particularly rough, in that self-absorbed, ‘I’m so ill’ sort of way. I went to Sainsbury’s in the morning and a friend from book group had to literally stand in front of me and shout boo, and it still took about two seconds for the world to swim into focus from behind the fog of self-pity.

Anyway, you know how sometimes when you’re feeling a bit yukky, so just want something nice to comfort you? I decided that the something nice I wanted was jam. Fiance actually made some jam a couple of months ago, but I felt a bit bad just eating jam out of the jar with a spoon, so I decided to make jam tarts.

Let’s face it, what exactly is a jam tart if not just a socially acceptable way to eat big blobs of jam? Plus you don’t even have a spoon to wash up at the end.

So I made some.

The pastry was a bit iffy, and I had a few problems when it came to making the cases. I only had a small cutter or a large cutter, when clearly what I needed was a medium cutter. I did my best though. I cut out 12 small circles, an then individually rolled each one out a bit more to make it bigger. I pictured myself on the Bake Off. Paul’s eyebrows were raised. 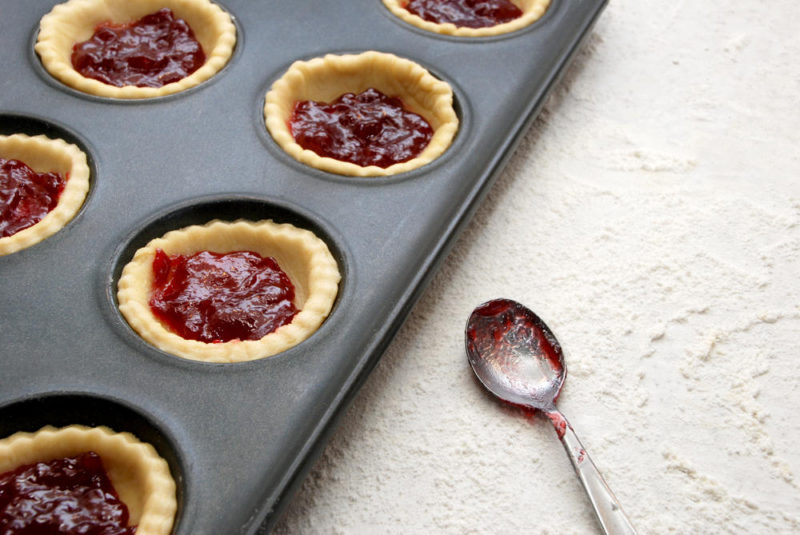 (This is a stock image, but fairly representative of the scene, although I was probably a little more generous with the jam. I didn’t want you to think though that I went about life doing ordinary things like feeling a bit crap and making jam tarts, pausing every few minutes to style a photo, just in case.)

I cooked them, (possibly for not quite long enough), and then exercised massive amounts of self control while they cooled down. When I was about four I stuck my finger into a hot jam tart and spent the rest of the day wandering around holding it in a little cup of water. I won’t make that mistake again.

When they were sufficiently cool, I ate one. Then I ate another one. Then a third. It was ace.

Fast forward then to this morning. I have nine jam tarts in a plastic tub, (bought especially for the purpose at Sainsbury’s yesterday), and a whole day of jam fun ahead. Belle is packing up the red velvet cupcakes she made last night, ready for the cake sale.

‘I could take your jam tarts too if you like,’ she said.

Gah! It’s for charity! What could I say? ‘No sorry, I need nine jam tarts today.’ No.

‘And don’t worry,’ she added, comfortingly, ‘they’re not going to be judged, we just sell them.’

‘No problem,’ I said, handing them over, ‘it’s all for charity!’

And off she went, to a school cake sale, with hand made jam tarts made by me. I’m pretty sure that has never happened before.

You’d think I would be sadder about it, but I’m doing okay. She may have the jam tarts, but I still have a spoon.