A few weekends ago I spent the night at the Mercure Bristol Holland House hotel and spa.  It wasn’t any kind of illicit rendezvous, I was just checking out their new Bristol inspired room. It was designed by Laura Withers, the hotel’s Assistant Spa and Leisure Manager, as part of the Accor Hotels My Room project.  Laura has lived in Bristol for nearly 30 years and loves the city, so created the room to reflect Bristol’s culture of street art, with particular reference to Banksy.

Arriving at the Mercure Bristol Holland House hotel and spa, I have to confess that I had my reservations. (See what I did there? Hotels? Reservations? Sorry…) Having lived in Bristol for a few years, I’ve driven past it plenty of times, and always thought that from the outside it looked a little bit dated. Because I’d only ever driven around that part of Bristol, I couldn’t really place it in my mind either in terms of how close it was to anything. I know it’s handy for Bristol Temple Meads station, but other than that, I was in the dark.

I’m pleased to report that stepping into the hotel lobby banished any concerns I might have had about the decor and design. The reception area was very smart and spacious, and I could see that the bar and restaurant area looked pretty smart too. I was soon checked in, and heading up to my room.

The Bristol theme struck me as soon as I put my little plastic key in the lock and opened the door. It was very well put together, with a bold pattern over the bed, and then little touches throughout the room. it could have easily been over the top, but it wasn’t – there was just enough of it to make a cohesive theme without the feeling like you were in Dismaland. 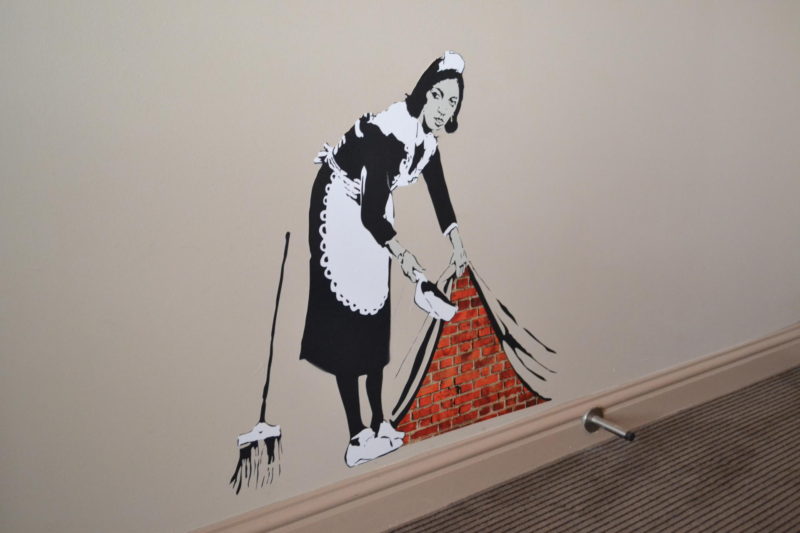 For dinner, I headed down to the hotel’s bar and restaurant. There were quite a few groups of people already in there, and it looked as though it was a popular location for hen and stag parties – I’m guessing the combination of transport links, a decent bar, spa facility, and proximity to the city centre makes it a good choice. It was the day of the EU referendum results, and so to drown my sorrows, I *may* have had three glasses of wine.

I feel like I need this today. I still can’t shift the sense of doom. #startattheurban

I also conducted a Twitter poll to see whether or not I should have chocolate fondant for pudding, which was far more conclusive than the referendum itself.

Should I order a hot chocolate fondant to smother #EURefResults in calories?

The next day, with just a mini hangover, I set out for a little explore. I hadn’t realised just what a brilliant location the Mercure Bristol Holland House hotel and spa is actually in. From my window I could see though exactly how close to the action I was, and a ten minute stroll took me into the heart of the harbourside, with the Arnolfini, Watershed and numerous lovely cafes and restaurants. I do find the actual ‘art’ in the Arnolfini a bit hard to get my head around, but it has a lovely shop!

I also went for a little wander in the other direction and had a look around St Mary Redcliffe church, which I’ve actually never visited before.

And of course, I had to sneak in a few front door pictures.

Yay! Yellow door! A bright of sunshine for a weird, gloomy week.

During my stay I also visited the hotel spa for a back massage and cleansing treatment. I’m generally not a spa sort of a person, (which I told the woman giving me my treatment – no pressure), but I have to say that I really enjoyed it, once I had relaxed into it. She did tell me that I would probably need three or four sessions to work on the tension in my shoulders, but I’m going to blame Brexit for that. I was feeling very tense about the whole thing. (I did say we shouldn’t have had a referendum, that we were too stupid.)

The only thing that I thought was a little strange was that the spa was in a separate building from the hotel, and so you didn’t get quite the seamless relaxing experience you otherwise might. You couldn’t really just waft down to the spa in your robe, as you had to go through the car park to get to it!

That and politics aside though, I had a very enjoyable stay, and would definitely recommend the Mercure Bristol Holland House hotel and spa as a base from which to explore Bristol.

What are your favourite things to do in Bristol?

I was a guest for one night at the Mercure Bristol Holland House hotel and spa. All opinions are my own.