We have a long standing Prezzo-related family joke. It’s not funny, I’ll warn you now. It’s so unfunny, that it barely counts as a joke, and I feel bad that I’ve even mentioned it now, when reviewing Prezzo. So bad, that I’m considering making up a funnier joke, just so as not to disappoint you. I can’t think of anything though. So, whenever we talk about Prezzo, we call it ‘Pressos’, in a strong Somerset accent. (We’re from Somerset so it’s okay.)

That is the entire joke.

I’m so sorry I put you through that.

Anyway, Belle and I went along to Pressos in Taunton a couple of weeks ago for dinner, as Prezzo wanted us to sample their new menu and let you know what we thought. (I’m stopping with the joke now, partly out of shame, partly for SEO purposes). Even though we’ve been back in Taunton for a couple of years now, I’ve not eaten in the Taunton Prezzo in all that time, so reviewing Prezzo in Taunton was a treat. (Weirdly, I have eaten in the Bridgwater Prezzo.) I don’t quite know why the Taunton version isn’t on my radar, as it has a very central location and, as I discovered when I went to the toilet, an outdoor seating area that would be lovely in the summer – definitely one to keep in mind for a cheeky summer lunch with a glass of wine.

I’m going to start with the pudding, as who doesn’t look at the puddings first and use that to plan their main course? No? Just me?

Do you remember Arctic Roll from your childhood? It was immense wasn’t it? For those of you who weren’t lucky enough to experience the joys of Arctic Roll, it was basically cheap ice cream, in a roll, surrounded by equally cheap sponge. It doesn’t sound much, but when you’re eight it’s pretty special.

For pudding at Prezzo I had a fancy, grown-up version of Arctic Roll: 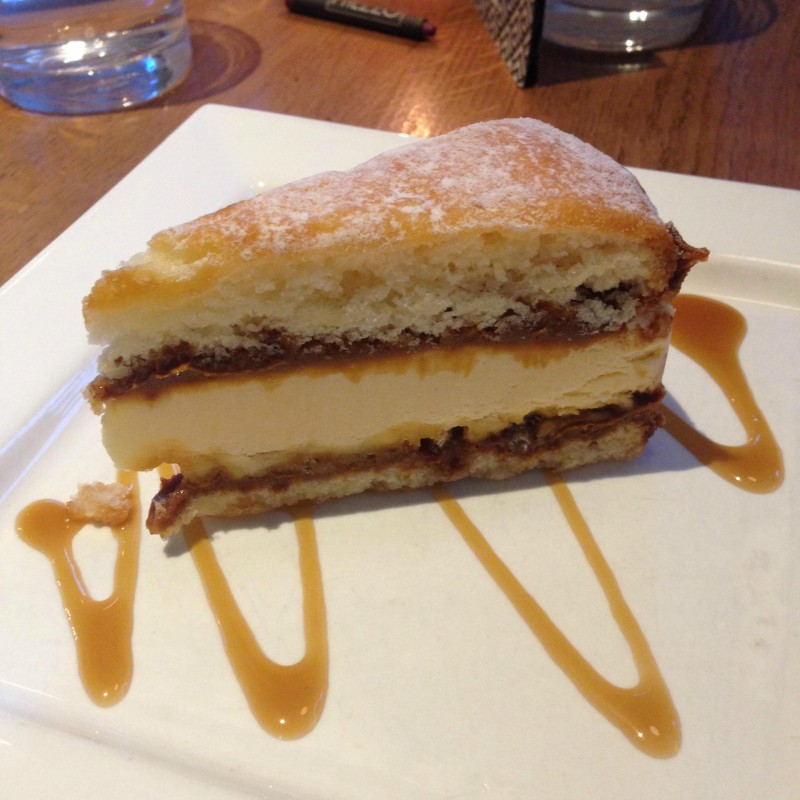 It was pretty ace – cake, but not, because it’s made of ice cream. And salted caramel. Oooh.

For my main course, I decided to go with something I’d never had before. I always like to eat things at restaurants that I wouldn’t eat at home, because somehow that feels like better value for money. I wouldn’t ever eat spaghetti bolognese in a restaurant for example, as I have made that at home about 729 times in the last twenty years. At Prezzo then, I went for duck pizza.

Duck on a pizza! Who knew? 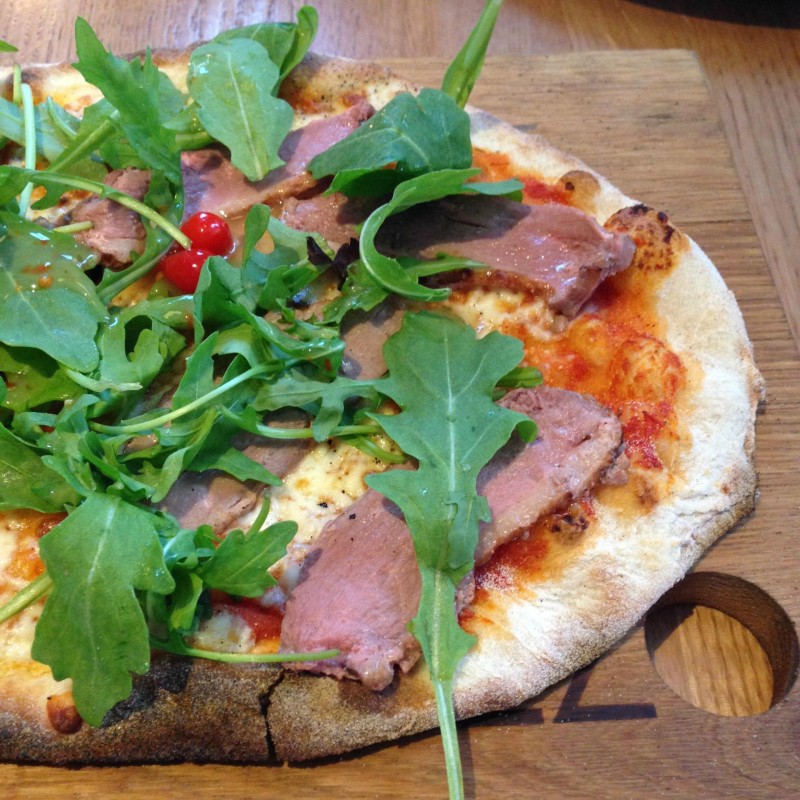 And finally, to start, I had these yummy little pasta parcels from the specials menu, with crumbled amaretti biscuits on top, because I love biscuits. They were really delicious, and it’s definitely not as weird as you might think to have the sweetness of the biscuit with pasta. 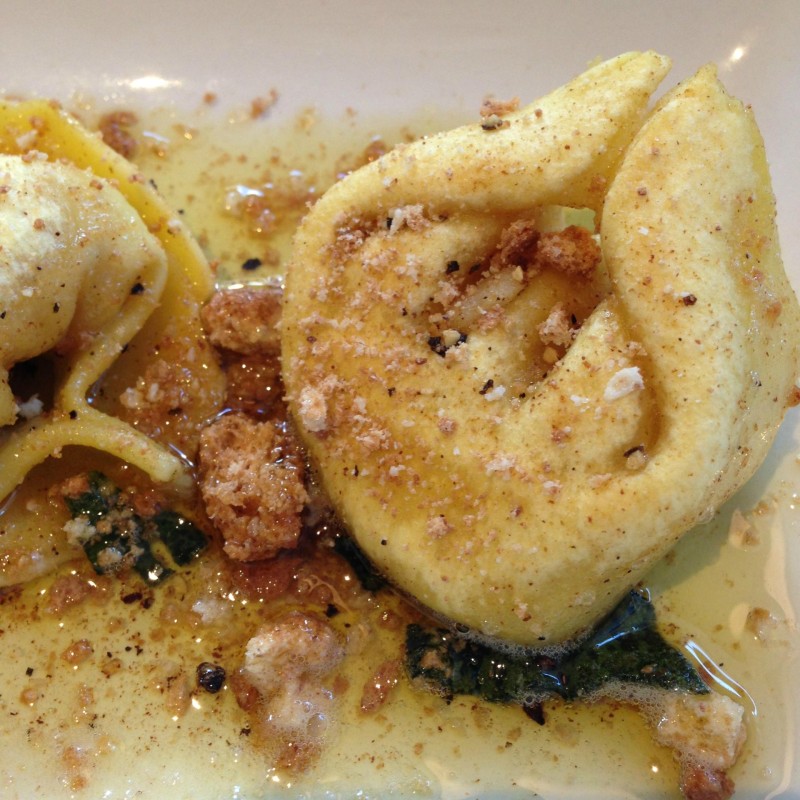 Belle enjoyed the standard kids’ menu choices, which are always great value in these sort of Italian chain restaurants, and she made a lot of effort with the activity sheet. We also enjoyed a few rounds of hangman, where she tried to catch me out by choosing words without vowels. It backfired after one round though, as I just guessed ‘Y’ first every time, and she kept getting annoyed.

For tasty, family dining, after reviewing Prezzo in Taunton, we’d definitely recommend it! 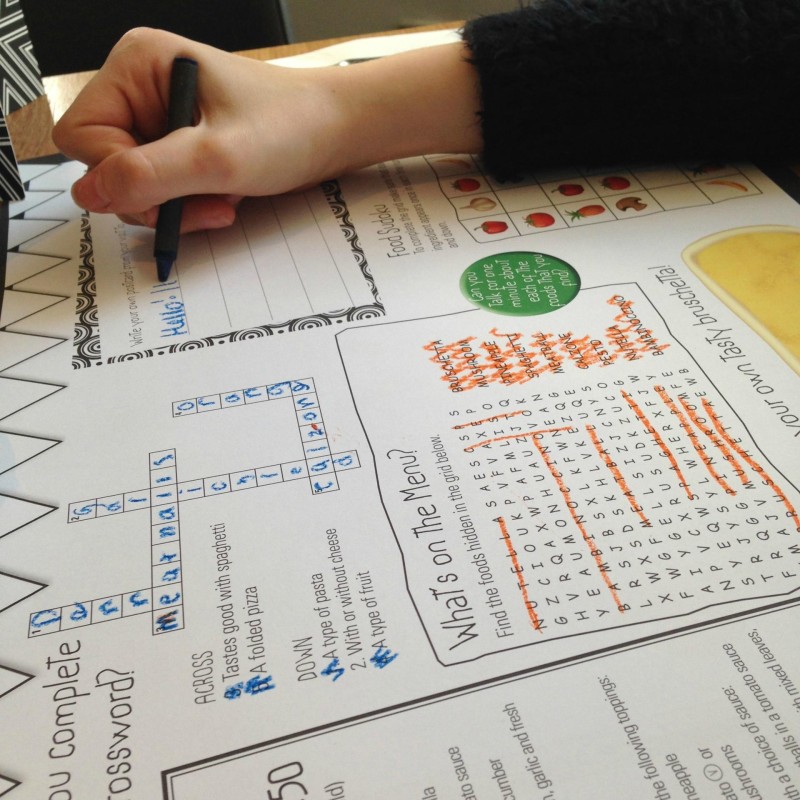 We were invited as guests when reviewing Prezzo – all opinions our own.