Did you know that April 25th marks the start of Stop Snoring Week? No? Well consider yourself informed. (It also marks my birthday, should you wish to send gifts.)

I’m sure my fiancé won’t mind me saying that he is the loudest snorer I have ever heard in my whole, entire life.

I don’t mean an adorable little snort now and again, I mean a full scale earthquake of a snore, that you can hear from wherever you are in the building, through closed doors, earplugs, the works. Fortunately, I am a extremely lovely and tolerant person, who can learn to live with most things, and so we’re a pretty good match. I have the odd night where I want to casually press a pillow into his face, but they really are few and far between, and I do appreciate that it’s not his fault, and love him regardless.

Still, it’s pretty loud, and it does have implications – it sometimes keeps Belle awake through the walls, it’s tricky if we go away as a family and share a room, and staying anywhere with friends or family can be a little awkward. And of course on top of all of this, I’m sure it must effect the quality of fiancé’s sleep – it can’t be very relaxing for him, and he often wakes up feeling tired with a sore throat.

One of the things that sets it apart from other snores is a complete lack of rhythm. There is nothing regular or relaxing about it, it’s more a series of snorts and choking noises – it really keeps you on your toes.

It makes absolutely no difference at all how he sleeps position wise. Sometimes I do ask him to turn over, but that’s more for my benefit, to make me feel like I’m taking some sort of action, or simply to point the noise away from me. We’ve tried lots of snoring remedies. Feeble things like nose strips make no difference, and he has even tried a mouth guard. Nope.

For a couple of months now though we’ve been trying something different – the SoeMac.

The SoeMac is a “non-invasive, alternative Oxygen Energy Therapy treatment that is helping people with a wide range of sleep and health problems. SoeMac is a completely natural device that works by drawing air inside, and producing a bio-usable form of energised oxygen, known as Singlet Oxygen Energy, or SOE. SOE can help to relax the lungs and the cardio-vascular system, and help to improve the body’s utilisation of oxygen.”

(I quoted that bit as it’s science.)

It’s designed to help with all sorts of breathing related issues, and more generally can be beneficial for conditions associated with low energy levels, such as ME and Chronic Fatigue Syndrome.

On a practical level, it’s really simple to use – you just plug it in and keep it near the bed. It suggests having it slightly above the level that you sleep, so we have it on a bedside table on a little stack of books. It emits a red light and gently whirring noise, which I did worry might be distracting, but actually it’s very comforting.

So, does it work?

Well, it’s hard to say. Personally, I think it has made some difference. You do have to give it a while – it doesn’t make a difference overnight – but I definitely feel that the quality of the snoring has changed. It hasn’t gone, by any means, but to me it sounds less laboured. There is less choking, and it sounds more rhythmic, which is less annoying for me, but I feel must be good for fiancé too.

He says he doesn’t particularly feel any different, but I would think that would be really hard to notice, especially as he has a lot of other contributory factors going on at the moment, like a new job, and a big commute.

To test it, we downloaded a snoring app called SnoreLab. The app measures your snoring during the night, and so in the morning you can see how much you’ve snored and how loudly. Now, I have to admit that, rather stupidly, we only thought to do this when we had been using the SoeMac already for a few weeks, so we don’t have a completely ‘before’ recording, but as the effects do take a little while to build up, it’s still useful to see how the results change.

This is the chart from a couple of weeks in. As you can see, it’s pretty loud. Epic in fact. You’d be hard pushed to get a higher snore score than this beauty: 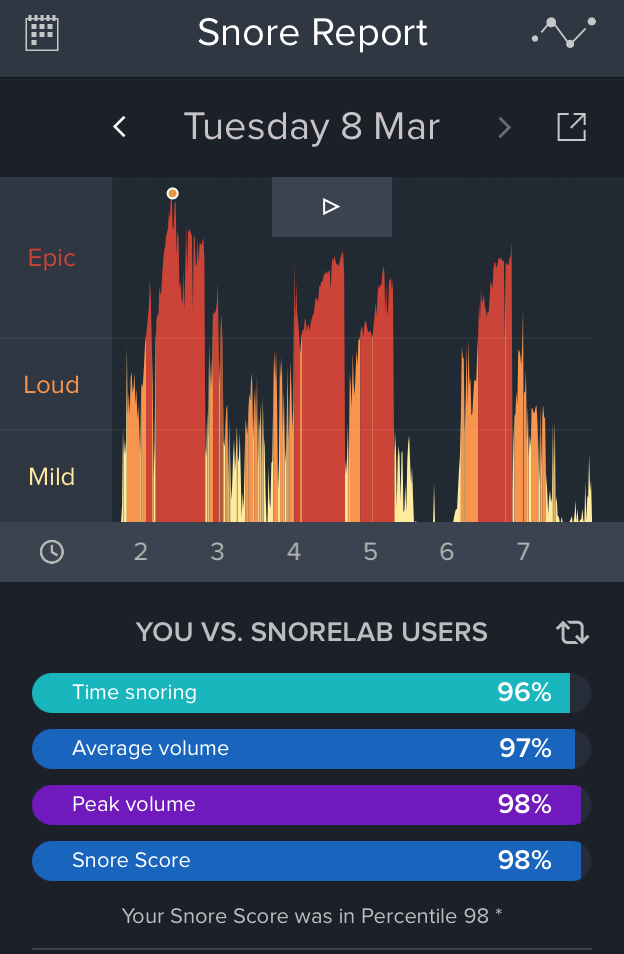 As you can see, it wouldn’t be hard, you’d hope, to see an improvement.

This read out is from a couple of weeks later, when we had been using the SoeMac for over a month. As you can see, the amount of snoring hasn’t really decreased, but the volume certainly has, and by this point I was definitely noticing the change in the rhythm. Even at a glance you can see that it’s looking much better, and the second chart, which shows the change in volume over time, backs this up. 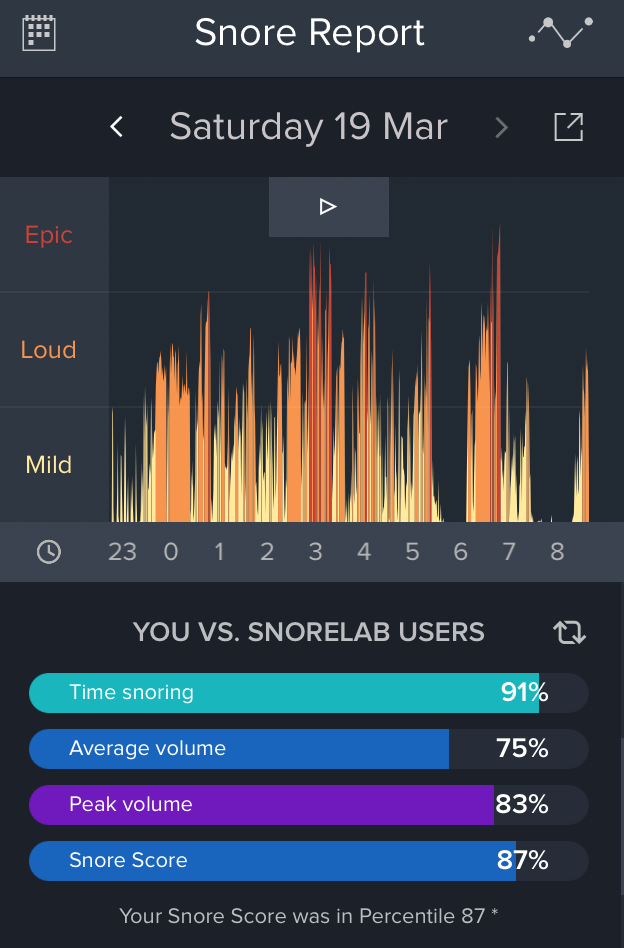 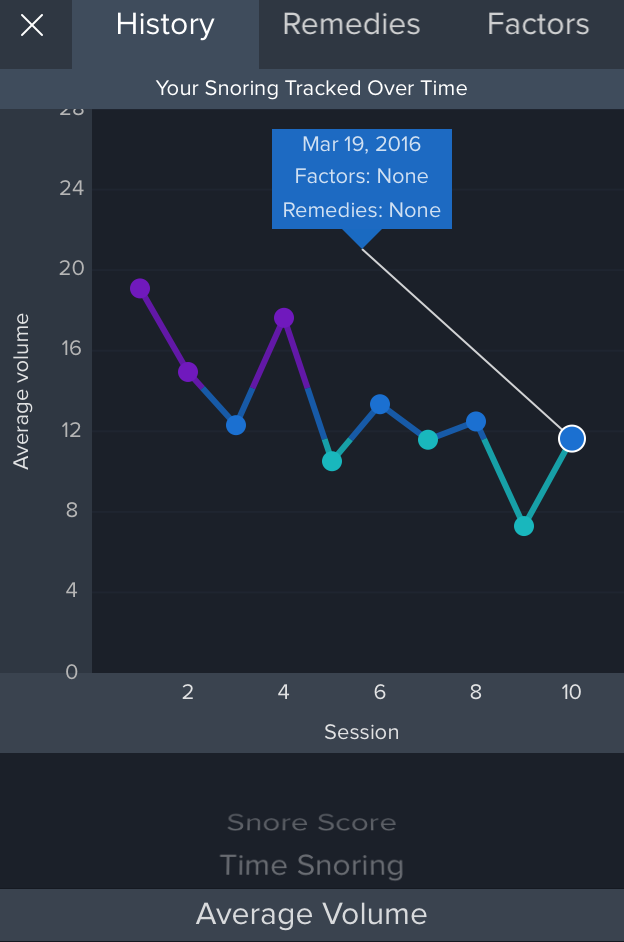 The downside is the cost. At £419 it’s not cheap. But it is cheaper than divorce and they do offer a 30 day money back guarantee.

Do you have any tips to help stop snoring or any snoring stories to tell?

We were sent the SoeMac to try for the purposes of this review. All opinions are my own.