Yesterday we booked a venue for our wedding.

It’s happening in April, so I realise that in wedding terms we are leaving it all very late in the day, but I’ve been feeling so laid back about the whole thing, it didn’t feel like an issue. ‘God, people make so much of a fuss about weddings, what’s the matter with them?’ I’d been thinking to myself. ‘It’s so easy, what even is there to do?’

Last night though, lying in bed at 1am, I realised that I had been so laid back exactly because we hadn’t done anything. In the middle of the night, it felt like the booking of the venue was a big cork coming out of a bottle. A bottle that had been shaken consistently for about 8 months.

The place we’ve booked is perfect, but it has one hitch – there is a booking first thing the next morning, which means all the clearing up has to be done on the night. Obviously we don’t want to do this ourselves, so I spent a large portion of time between 10pm and midnight worrying about who would do this.

The I moved on to tablecloths.

What happens about tablecloths??

Where do I get them? Am I meant to buy them? Hire them? Borrow them? Wash them afterwards?!

You know how in the middle of the night, ridiculous things become a matter of life and death? That’s how I felt about the tablecloths.

When I finally got to sleep, there was no relief. Instead, it got worse. It was my wedding day, and I was wearing what was apparently my dress – a shocking pink lace affair – but I had totally forgotten to plan anything else. People were milling about my house, but no one seemed to have actually been sent an invitation and I had no idea what time the ceremony started.

I realised I hadn’t thought about hair or make-up and when I looked in the mirror my face was a bright orange – some sort of TOWIE fake tan gone wrong – and my eyebrows were painted on like a clown.

It was NOT COOL.

Is this it now? Please tell me I won’t become some sort of hysterical bride, unable to talk or think about anything other than chair covers, (where do you get chair covers?!?) and bunting? 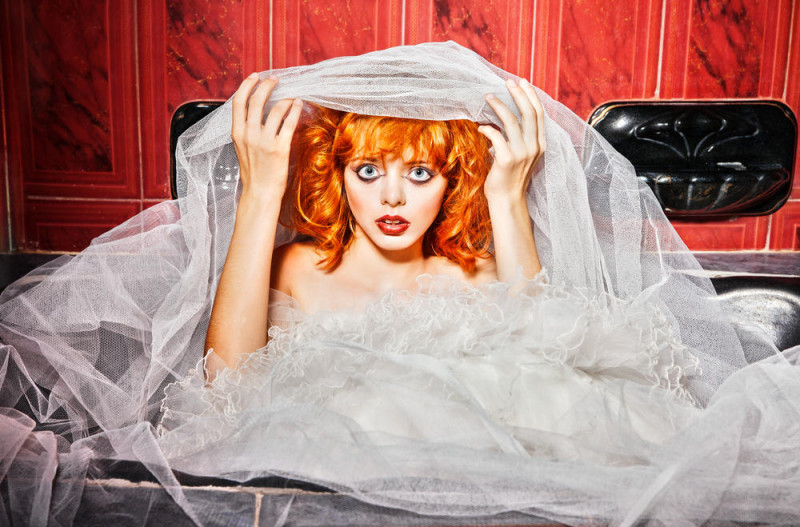