Did you know that potatoes are in decline? They’re not depressed or anything, we’re literally just eating fewer potato based meals. Gone are the days of sitting down every day to meat, potatoes and two veg. Now it’s all spaghetti and lasagne, or worse still, carb free.

(Not a way to live in my opinion.)

Although potatoes might immediately make you think of your Grandad, they actually have a lot going for them.

There is something so simple about a potato – when you cook with a potato, you’re cooking from scratch, and everyone knows that’s one of the most important changes we need to make to our diets. So this week I thought I’d get adventurous with my potato recipes and make some homemade potato gnocchi. We eat quite a bit of gnocchi but I’ve never made it myself, so it was time to get creative. 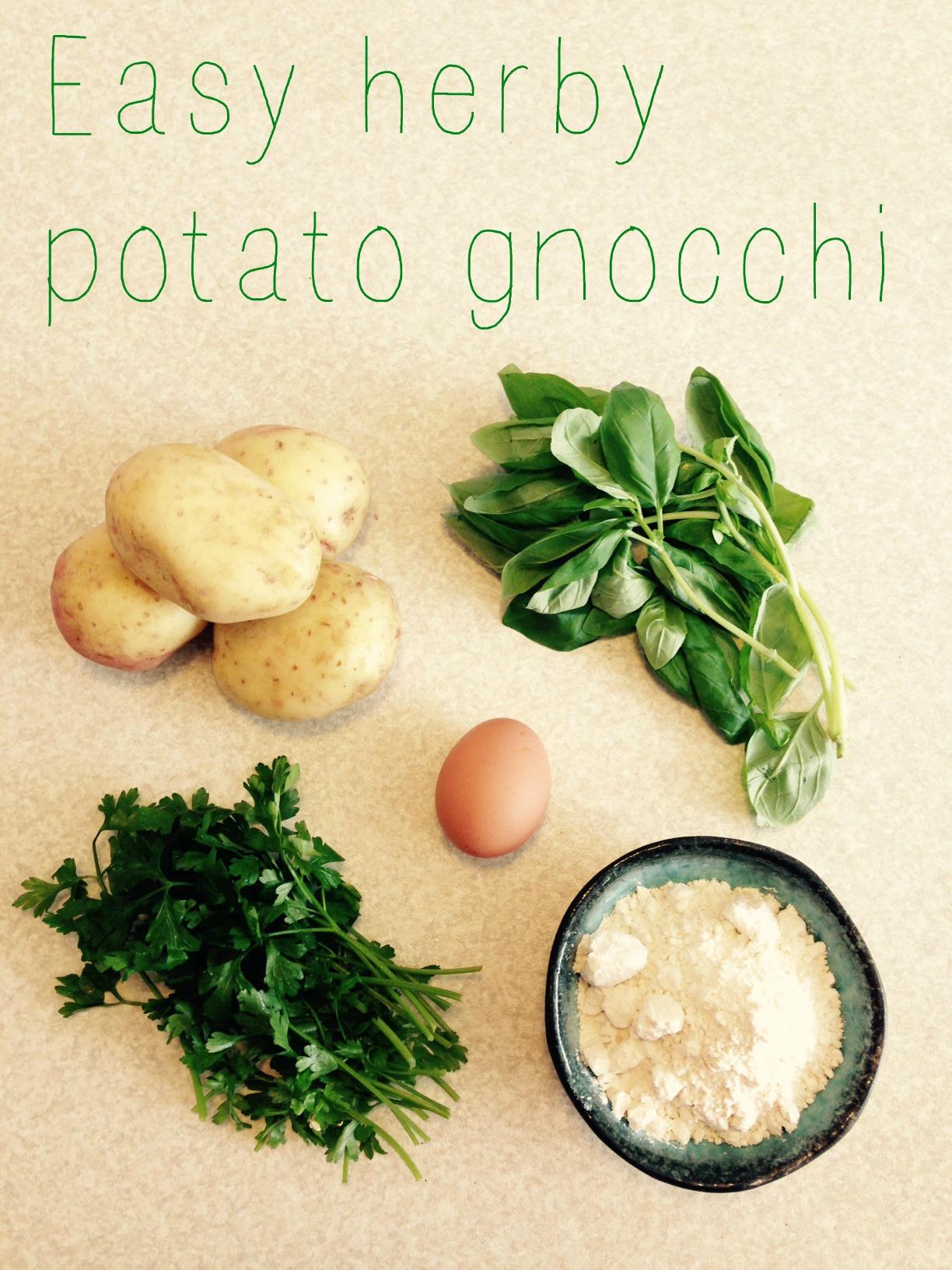 For my homemade potato gnocchi you will need:

This recipe was enough for good sized portions of homemade potato gnocchi for three of us and would probably stretch to four. In total it took around 40 minutes from start to finish.

Start by peeling the potatoes and boiling them. The secret is to not overcook them – you don’t want soggy gnocchi. While they’re cooking, you can whip up a simple tomato sauce. For this I gently fried an onion, added a punnet of halved cherry tomatoes and some salt and pepper. Once this had cooked down a little bit I added some water and simmered it gently until it looked suitably tasty. 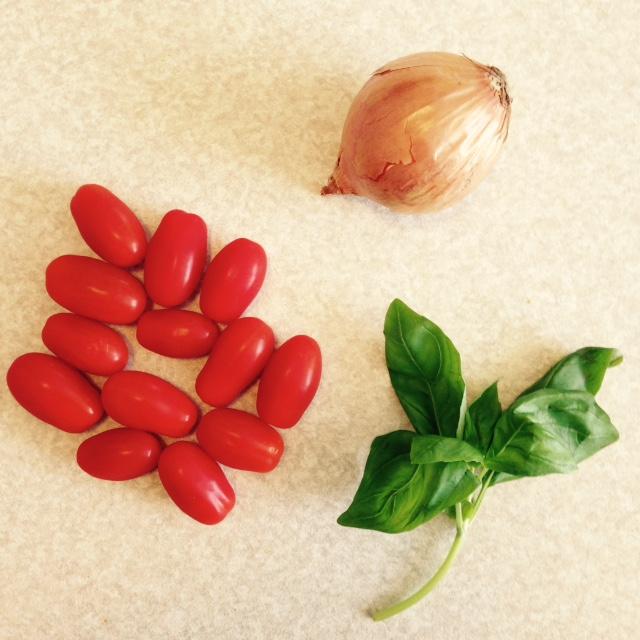 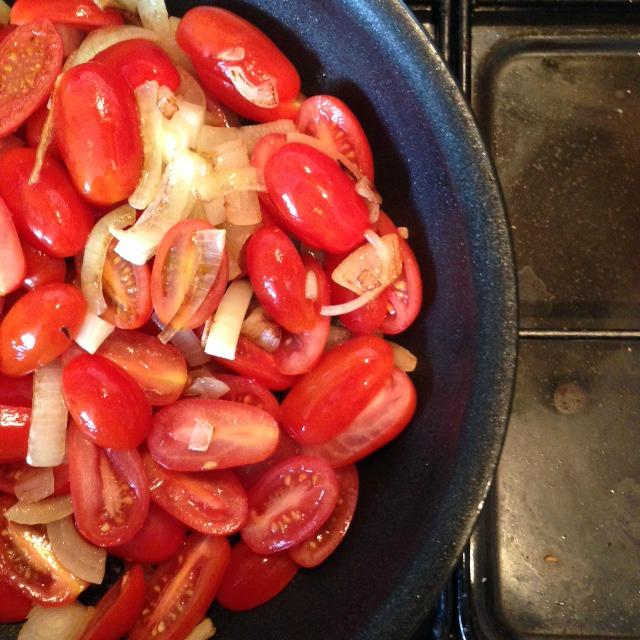 Once the potatoes are cooked, drain and leave them to dry for five minutes, then mash, with no butter or milk.

Beat in the flour, then add in the beaten egg, chopped herbs and seasoning. You’re aiming for a soft dough like consistency, so if the mixture is too sticky for you to knead then you’ll need to add a little bit of extra flour. 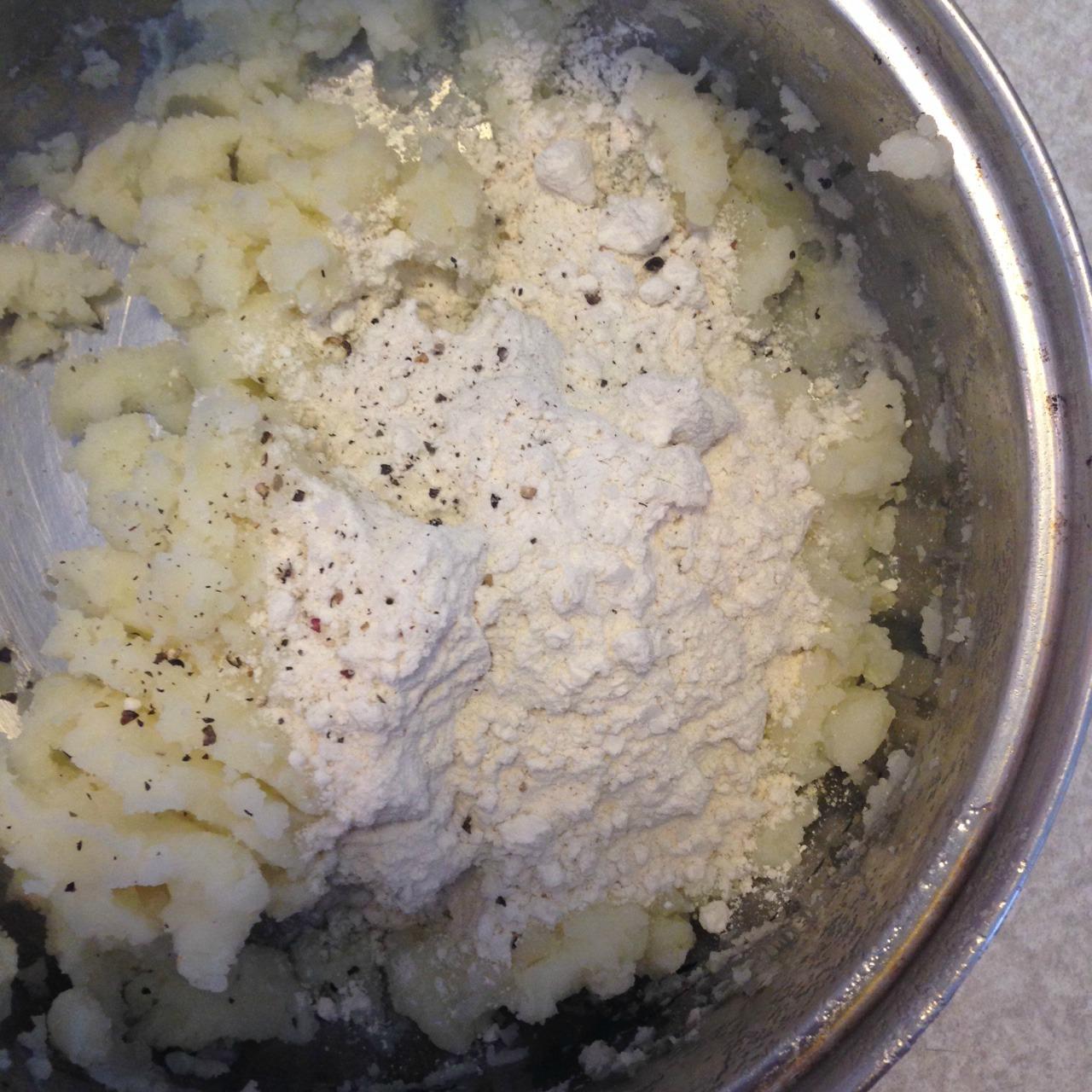 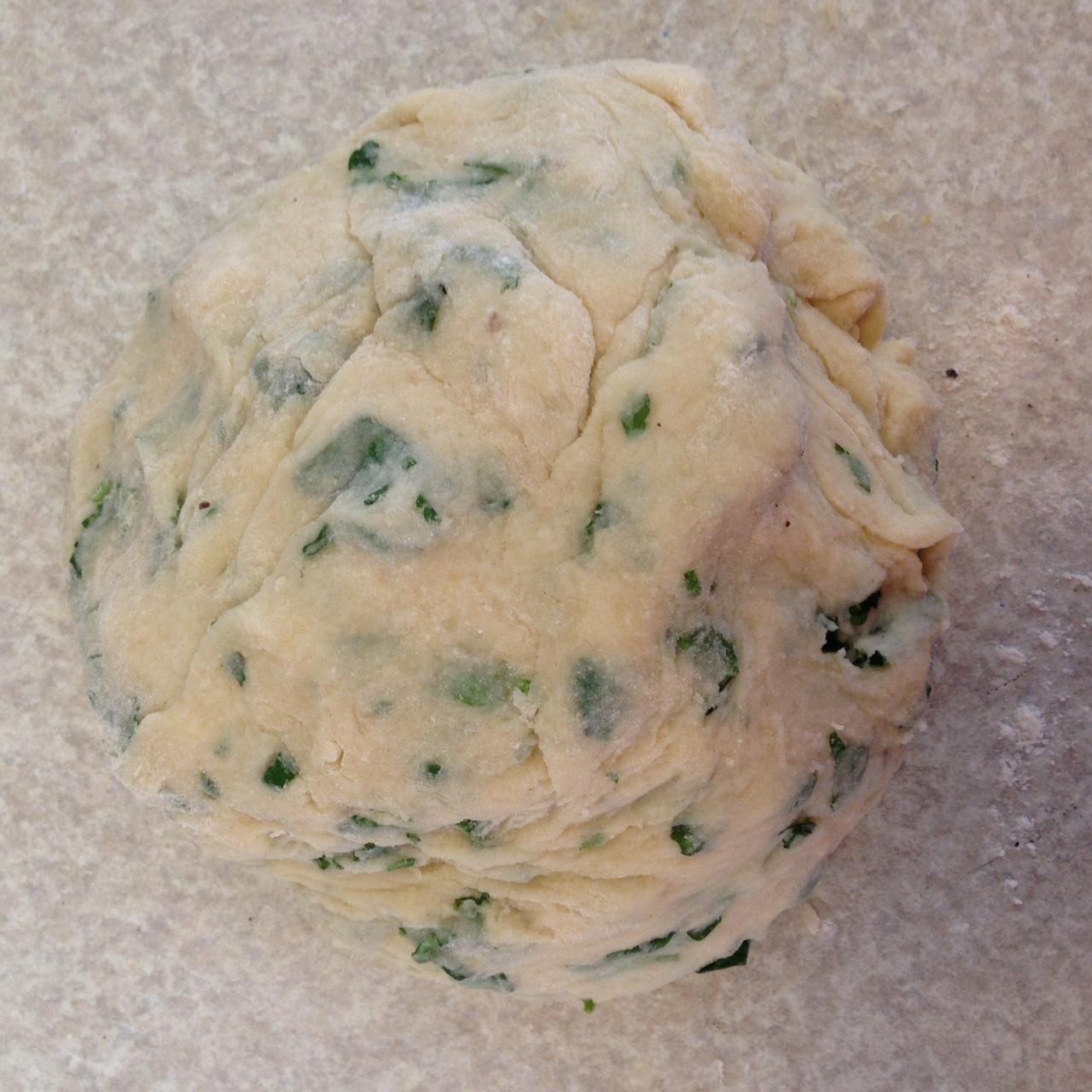 Once you have your homemade potato gnocchi dough, give it a bit of a knead on a floured surface. Take a chunk of dough at a time, and roll it into a worm shape, like you did when you were little and playing Playdoh. Chop your sausage into gnocchi shaped chunks. 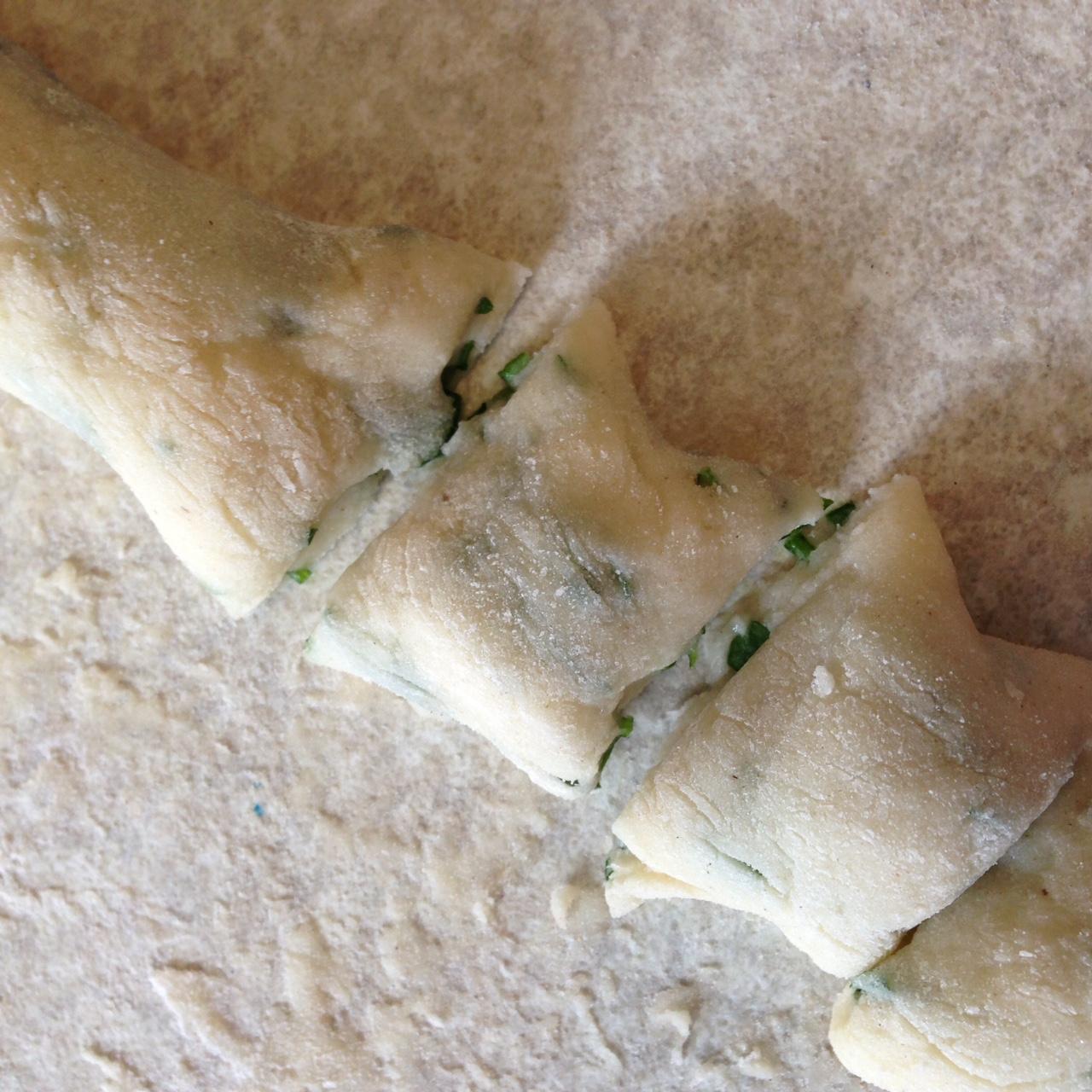 At this point you have a few options:

1. You can pop it into the fridge to keep for later.

2. You can freeze it. (I’m pretty sure you can anyway.) I did this by spreading them out on a tray to freeze before popping them into a freezer bag, so they didn’t stick together, just like when freezing banana chunks. If you’re a busy working mummy, just like me, this is a handy option because it means you can make in bulk and then have a dinner that cooks in a matter of minutes.

3. Or… add it to a pan of boiling water and cook for two minutes. You’ll know it’s done because it will bob to the top.

Then simply drain and serve with your tomato sauce, or whatever else you fancy. It works well as a main, instead of pasta, or as an accompaniment as you might do with boiled or mashed potatoes. You can experiment with adding flavours to your gnocchi, as it can be a little bland on its own. A little grated cheese works well.

Do you cook much with potatoes? What’s your favourite recipe? Has this inspired you to be a little more adventurous? 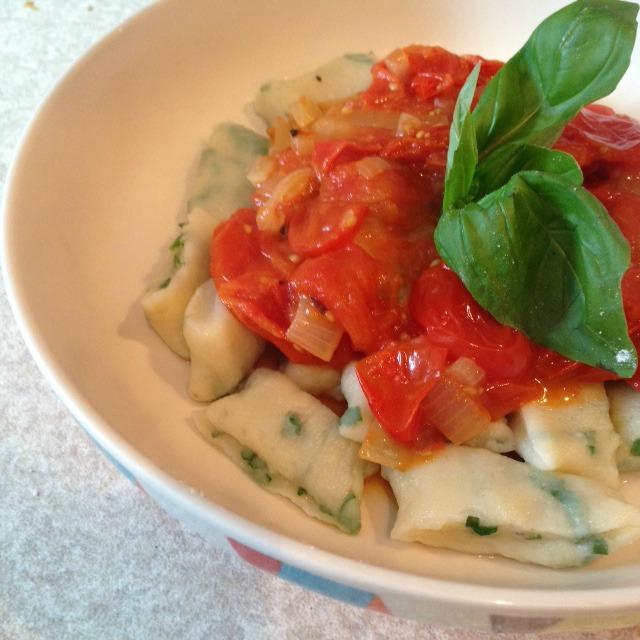 If you enjoyed this homemade potato gnocchi recipe why not have a go at this easy pea soup recipe?