This review of the Leitz Complete Professional Bluetooth Stereo Speaker has been written by my fiancé, because he knows all about things musical. (And I was really busy and he is very kind.)

A few years ago, I was sat on a train going into London. The train was busy with commuters, but rather peaceful. All of a sudden, the silence was broken but a loud distorted racket coming from behind me, that I think was rap. Over the course of half a song, I listened to the narrative of an angry sounding American who, between expletives, was suggesting he’d like to do some things to a lady of the night, which to my uneducated ear sounded neither pleasurable or physically possible.

Everyone was rather British about the situation. Commuters glanced at each other to show their general disgust, and there was an atmosphere of tutting and shaking heads.

“Excuse me, please could you turn that off?”

Having not seen who the music belonged to, I was shocked to see an immaculately dressed woman in her early thirties, holding a smartphone to her head. Perhaps she was deaf.

I was shocked and sat down. Other passengers used body language and facial expressions to confirm that I had just made an idiot of myself. Obliviously the noise was antisocial, but I can’t understand why anyone would listen to music that’s distorting.

The way we consume music is changing, and changing fast. Think back to when you first bought music. It was probably on CD, cassette, or even an LP. When I forked out good money for my first single – The Firm’s classic, “Star Trekkin’” as you ask – I had to put it on a record player, delicately place the stylus on the record, and then put it away again for choosing something else to listen to. And records were delicate too – there was what can almost be described as a ceremony in putting music on. The juxtaposition to listening to music now is marked. You type in the name of a song into Google, listen to it for the 30 seconds you like it, and then move on. Listening to music now is different. It’s a commodity that’s available without paying money or paying respect to it and it doesn’t matter how the sound comes out. We all have smartphones that can do and play anything, but they still don’t sound good enough.

Since we moved our living room around, we’ve been watching far less TV and listening to more music and radio, which made a review of the Leitz Complete Professional Bluetooth Stereo Speaker easy to do. Having a Bluetooth speaker in the lounge has meant that whether Jo is listening to (sorry, having a conversation with) The Archers, Belle is dancing, or I’m listening to music, there is a decent speaker without cables all around the room. 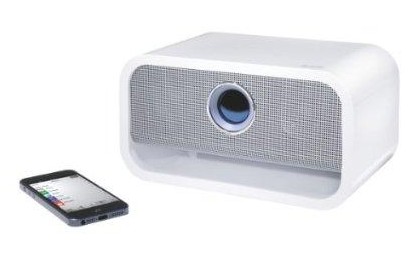 The Leitz Complete Professional Bluetooth Stereo Speaker, a name which trips delicately off the tongue, is stylish and easy to connect. One tap of its aptly named blue button makes the device discoverable to compatible devices. It’s all very simple.

Regardless of what it looks like, the sound quality is good. All too often with smaller speakers, you get a tinny treble end and the bass rattles. Not through this. There’s a discreet rubber lip around the base that means it doesn’t rattle, no matter how high you turn up the volume or how much bass there is.

I know it’s designed for ease, in a review of the Leitz Complete Professional Bluetooth Stereo Speaker I’d have liked to see a more accurate way of controlling treble and bass balance than the two knobs on the back of the unit (although that’s being picky). There are also input and output ports if you’re using the machine with cables, but to be honest there’s no point as it’s not what it’s designed for.

As a base unit to have around the house, this is perfect. It’s small and stylish and is punching well above its weight in terms of the sound it produces. So, next time you’re going to listen to some music, take the time to listen to it properly. It sounds so much better.

Disclosure – we were sent the speaker for the purposes of this review of the Leitz Complete Professional Bluetooth Stereo Speaker. All opinions are our own.