I had a bit of a moment yesterday, and I can’t quite decide in my head whether it’s a proper achievement or a bit lame.

It’s been brewing for a while, and when I got to within 10 I became a bit obsessed, checking my phone repeatedly, refreshing the screen again and again so that I could take a screenshot of the moment when it said 60,000. (I think this was possibly the lame bit in the proceedings.) 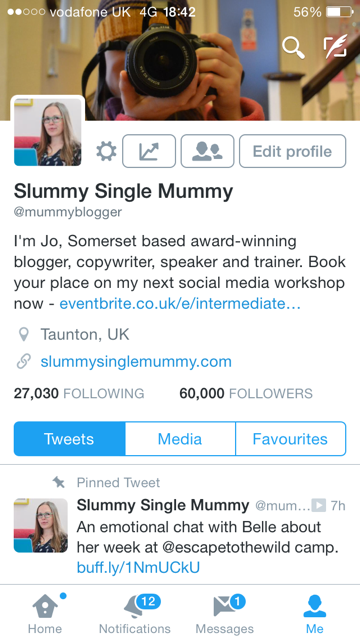 It was an awkward moment for me, because on the one hand I wanted to be proud and excited, but at the same time I was struggling with that little voice in my head saying things like ‘yeah, but come on, it’s not a real thing is it? Who plays with Twitter as a job?

“But it is real!” I say to the voice. “It’s important for people to connect online and create content that’s interesting and engaging…” and then I trail off for fear of sounding like a bit of a goon.

This isn’t about looking for praise, because I genuinely believe that anyone can build up a decent Twitter following if they really want to, (come on my workshop next week and I’ll show you how), it’s more about wondering what motivates that nagging voice and how we can stamp it out.

Why is it do you think that so many of us still suffer from that imposter syndrome, even when we’re successfully managing careers and families? At what point does that annoying inner voice shut up and let you get on with things?