Before we start, I have to say up front that I am not a big shopper. I particularly don’t like trying on clothes and seeing my bottom in mirrors.

However, I do like a relaxed mooch around a few well chosen shops, looking at cushions and notebooks, followed by a spot of tasty lunch. I also like it when shops are lined up in a nice row or circle, so I don’t get too befuddled by choice, which I why I normally prefer doing serious shopping in a shopping centre rather than a town; then I can be sure I have visited everywhere, and not be worried that I’ve missed a gem in a back alley somewhere.

(I do appreciate that this probably makes me very unfashionable, and I do support local, independent retailers, but on big days out I just like a bit of order thank you.)

This weekend we went off to explore the McArthurGlen Designer Outlet in Swindon, never having been before, and I was immediately comforted by the fact that everything was laid out in a circle and that there was a map, where I could tick things off. I also liked that up to five hours parking was only a pound – bargainorama. It was very easy to find, just off the M4, and by the time we arrived Belle had only said ‘I want to go to Claire’s Accessories!’ about 27 times, so it was all good.

Everything was covered, which was jolly good luck, as it was pouring down with rain. The complex had plenty of character though, and definitely didn’t feel like a sterile shopping centre. It’s next door to the railway museum, and this is built in to the design, giving you a feeling of arriving on a train platform when you step through the doors. 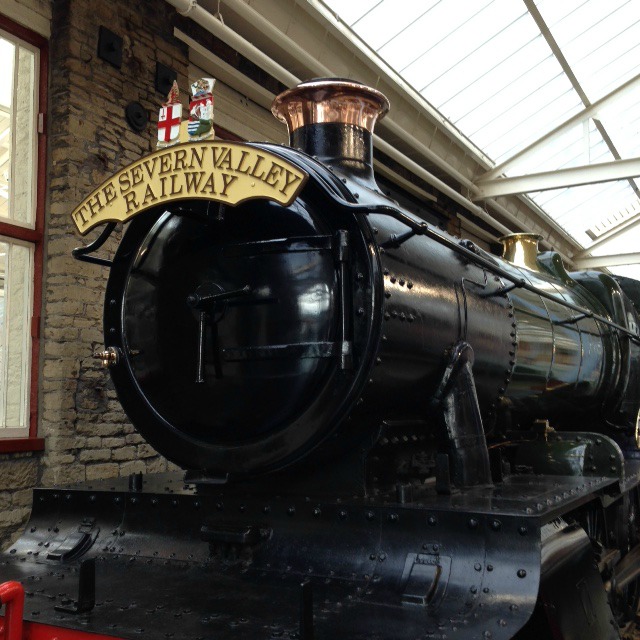 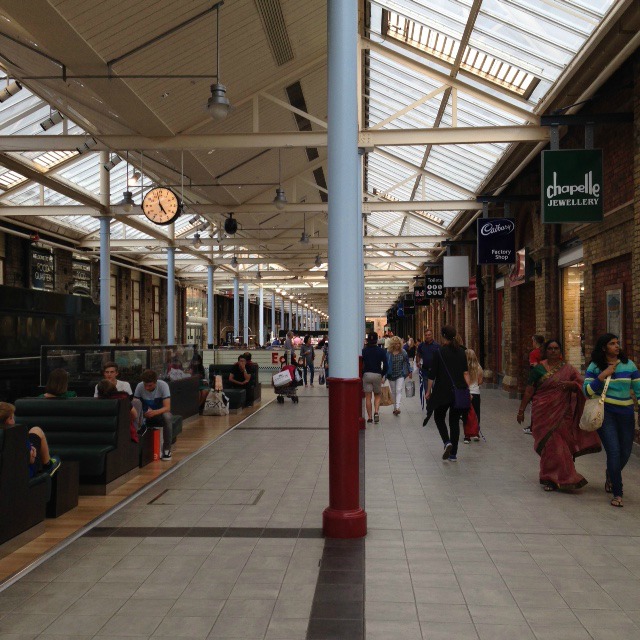 There was a good variety of shops, including things Gap, Crew, Next, M&S and Lacoste for kids clothes, and Paperchase for me. (I do love a good notebook.) Belle made a beeline for Claire’s and the beauty outlet, as she seems to have discovered make-up recently, much to our horror.

Shopping trips like these can sometimes be a bit dull for kids, but McArthurGlen have done a lot to try and make it as enjoyable as possible for everyone. There’s a creche for kids between 18 months and 9 years, high chairs galore in the restaurants, plenty of baby changing facilities, and parent and child parking. One of our favourite things was the mini cars available to hire – I can imagine my kids would have loved these when they were little and we saw a lot of them around the shops. They had handles too to hang your shopping on, which looked very useful – I remember how much I missed having somewhere to hang my shopping once we stopped using pushchairs.

For really tired legs there’s even a land train travelling around the centre, something that would definitely help sell it to my mum! 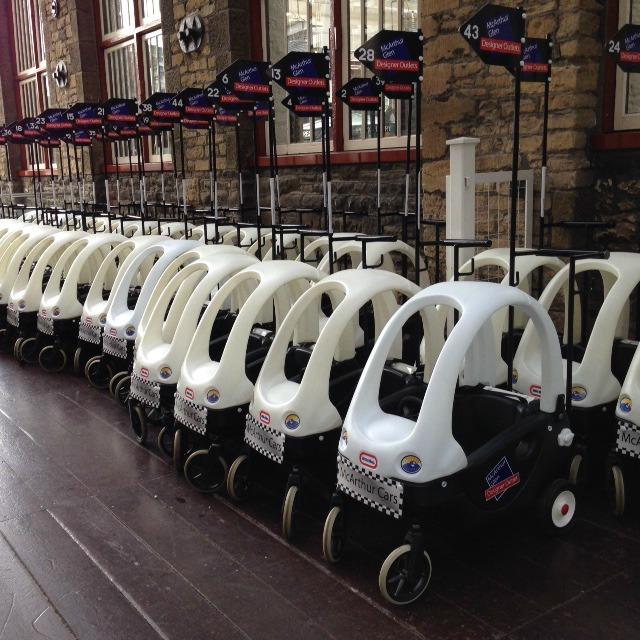 There was a really cool play area too, which was in a sort of courtyard in the middle of the centre. It was partly covered, but open to the elements, so really nice for kids and parents to get some fresh air. Apparently it’s the UK’s ‘first and only Wall Hola children’s play area with interactive Sona’ – I don’t quite know what this means but it sounds impressive. I didn’t want to be the creepy grown up loitering in the play area taking pictures, so you’ll have to take my word for it being good, and try to imagine it from the sign… 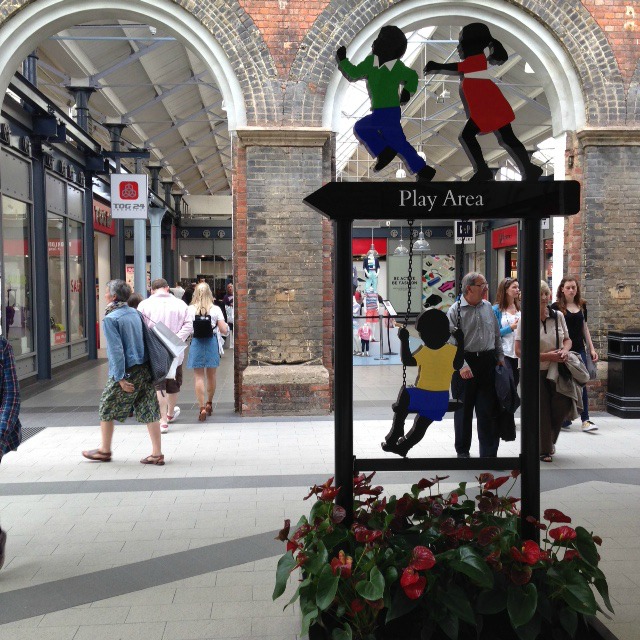 The only negative for me, family wise, was the proliferation of mini amusements dotted about – the sort that cost 50p of £1 a ride. (I didn’t actually check that you had to pay, but I’m guessing you did.) I know kids do love these, but I can imagine if you had small children it might get rather annoying having to drag them away from them every hundred yards! 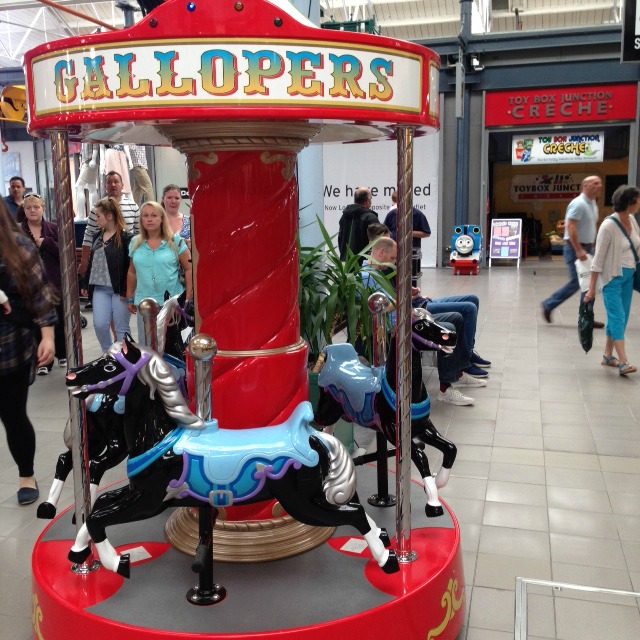 Opting to go for lunch at 1pm on a wet weekend inevitably meant a bit of a queue outside Wagamama, but it did move relatively quickly and once inside the food didn’t take long to arrive and was very tasty. There were plenty of babies and prams around, but it definitely didn’t feel crowded.

We went for Wagamama as they have such an interesting menu, including simpler options for kids. Belle enjoys using chopsticks and I like being able to watch everything being made in the open kitchen. I went for Yaki Udon, and only partly because the chunkier noodles are easier to pick up. 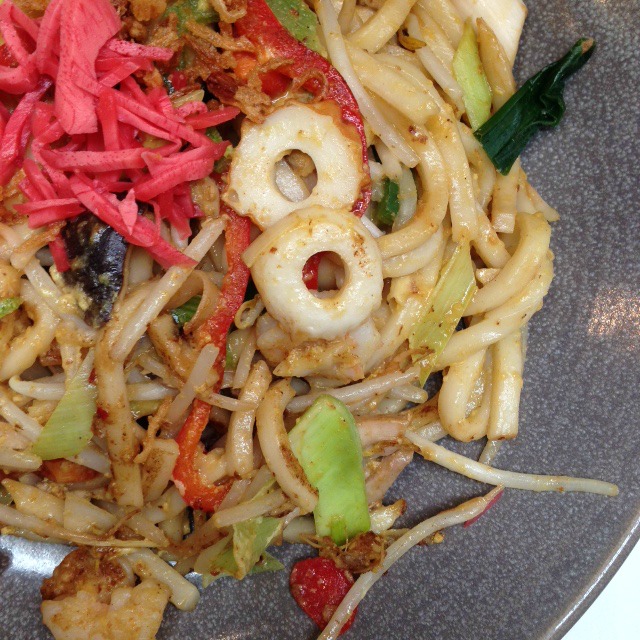 I often find it’s the attention to detail that makes the difference on days out like this, so was pleased to find plenty of bins and lots of seating dotted about. There were also some high benches with stools and plugs, so bored teenagers (or grown-ups) can recharge themselves and their phones.

Belle also really enjoyed entering the competition to see if she could win a prize from one of the outlet stores. In return for signing up to their newsletter at the information desk, you were able to chose a key from a big bucket and have a go at unlocking three glass cabinets, each containing a different item. We didn’t win, but I thought this was a really fun idea and definitely a more exciting way to sign up to a database than just filling out a form. 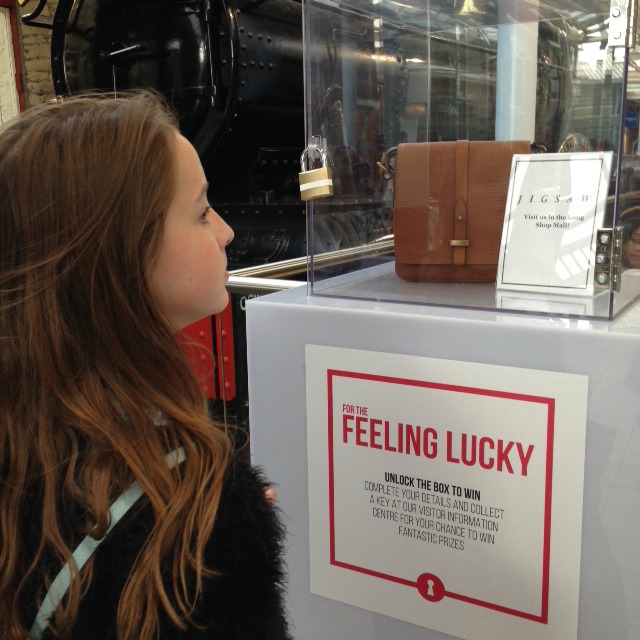 By 4.50pm things were starting to shut up, (it was a Sunday), so how else could we finish the day than with a visit to Ed’s Diner? Belle put Surfin’ USA on the jukebox and we ordered a round of peanut butter and banana milkshakes – an excellent conclusion to a lovely day out. 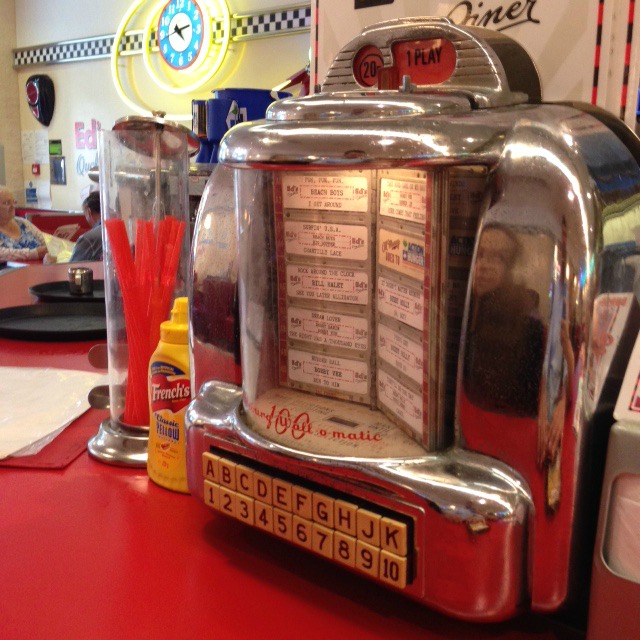 Disclosure – we were invited to McArthurGlen in Swindon as guests and given a voucher to spend for the purposes of this review. All opinions are my own.