Looking for a cool cafe in London to work in? Want a creative workspace in the city to hang out in for a couple of hours? Need somewhere funky for a London meeting that will make your prospective client think you’re super cool?

You’ve come to the right place, because I’ve put together a list of 11 cool cafes to work in in London. (I bet you guessed that from the post title didn’t you?)

After six years of freelancing I can safely say that nothing is guaranteed to sap your motivation and creativity more than five days in a row sat at home, staring at the same four walls as you work, with only the murmur of Escape to the Country in the background for company.

You need to get out there dude! Soak up and the sights and sounds of life! Honestly, the change of scene is just what you need to kick start that dusty old work ethic, and finding a great cafe to work in can be a lifesaver. I took a whole day recently, getting up extra early, to explore some of the best cafes for freelancers that London has to offer. All of these I have visited myself, (or a branch at least), and I paid for all my own food and drink, so you know I will be totally honest.

Of course one of the key factors in choosing a cafe to work from is the internet access. Experience tells me that wherever you are in London you’re never far from the Internet, but just in case, I went armed with an 4GEE WiFi Mini from EE. This funky little device not only looks pretty cool, but it’s actually useful too. It acts as a mobile internet hotspot, so even when you don’t have access to WiFi you can still get online. In fact, you can connect up to ten devices at once! Not only that, but it doubles as a charger, so you can use it to top up your phone or tablet battery when you’re out and about.

EE have the biggest. fastest network in the UK and they’re now doubling their 4G speeds too apparently, (I find it hard at this point not to imagine a series of hamsters in wheels being made to run faster than ever), so if you are thinking of getting a gadget like this, EE are the people to get it from. 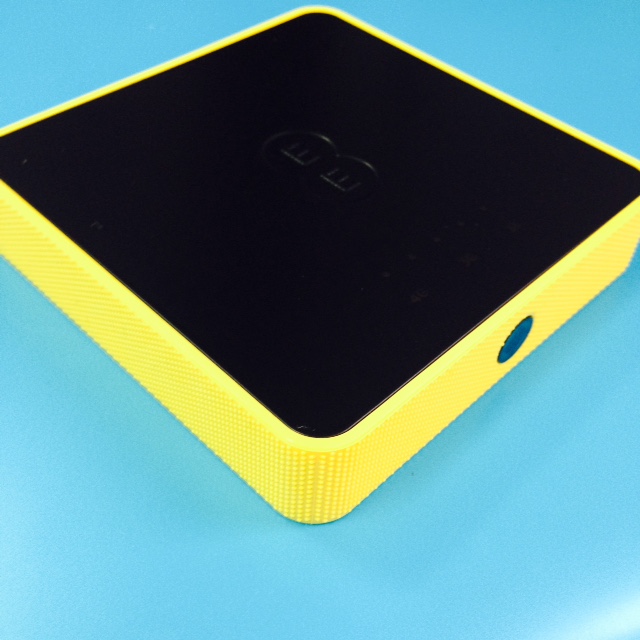 The 4GEE WiFi Mini is perfect for me as I use a Chromebook and so am pretty much impotent without the internet. On the plus side however, my Chromebook is super light and has a battery life that’s longer than the string of excuses Belle can churn out to avoid the dishes. Eight hours plus is standard for me, so I can easily go out for the day without having to worry about where I’m going to plug in.

Whether you’re a London local then, or an interloper with an hour to kill and a backlog of email, looking for a decent cup of coffee, I’ve got 11 cool London cafes to work in to inspire you, all within easy reach of public transport and none so hipster that they’re too scary to go into without a beard.

Every time I asked on Twitter about cool cafes in London to work in, at least one person mentioned Timberyard, so I couldn’t not visit could I? Timberyard has two cafes in London, one on St Martin’s Lane, near Covent Garden, and one on Old Street. I went to the one near Covent Garden, and actually met a potential client there. It was a great venue for a work meeting as there was enough going on to enable you to talk freely without everyone hearing, but without excessive cup rattling and chit chat noise. I had a wonderful hibiscus ice tea. 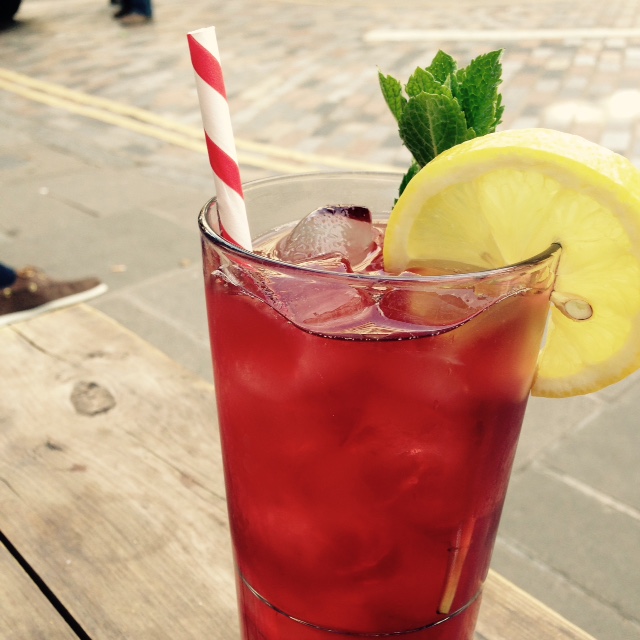 I had a nose around downstairs when I went to the toilet and this seemed to be the heart of the action freelancing wise – there were loads of people using laptops and an awful lot more space than you would have thought from the road.

The Attendant – Fitzrovia and Shoreditch

The original Attendant, a five minute walk from Oxford Circus, is a disused public toilet, complete with urinal booths, giving it the feel of a very small, slightly grubby, library. It’s very small, as you would expect from a toilet, but I don’t think you’d need to feel bad about cracking open the laptop – I was the only person in it at 10am. The downside of this is that there isn’t a huge buzz – probably better for killing half an hour than for a whole morning. (The newer Shoreditch version looks much bigger, but without the fun toilet angle.) 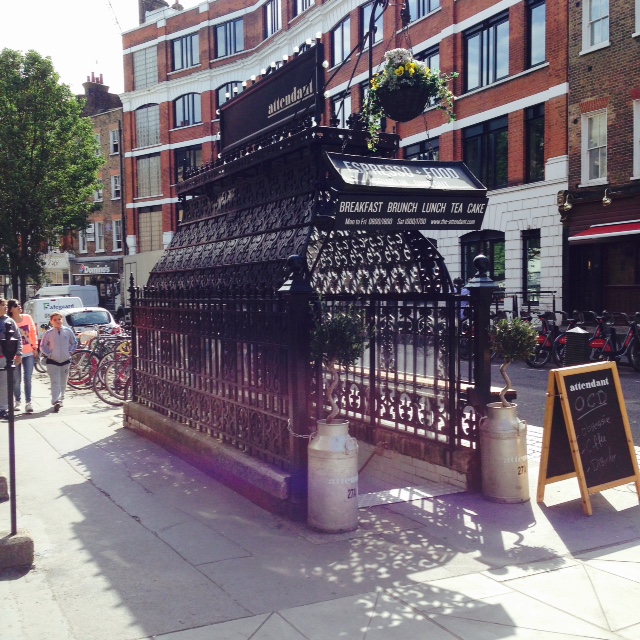 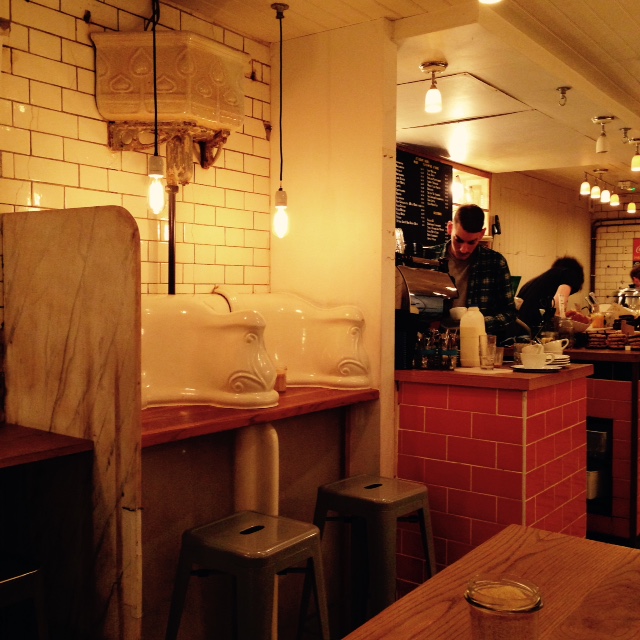 Two of the three members of staff had beards, making it borderline too cool for me. My 4GEE WiFi Mini had a brilliant signal, despite it being in a basement. (NB While I was writing this, three more men came in, two of these had beards too, bringing the total number of beards to four.) 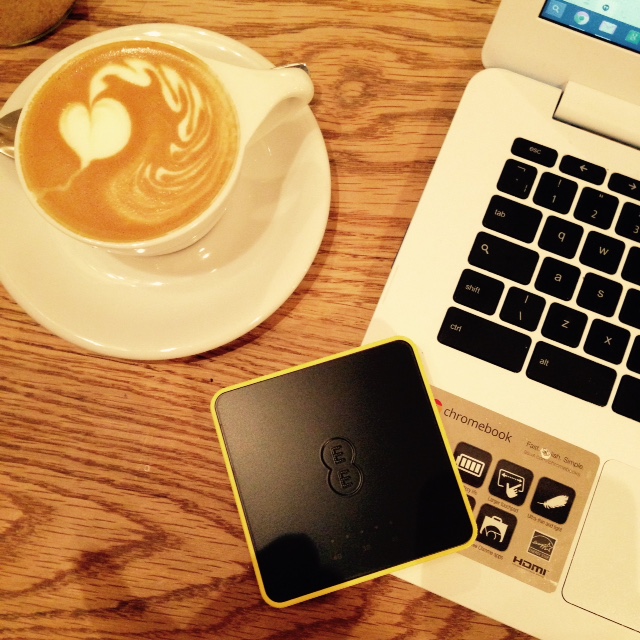 Piacha tea bar – Islington [NOTE: Piacha has since closed down but until I replace it it is staying here otherwise it isn’t still 11 places. Don’t go there though or you’ll be disappointed.]

I wanted to try somewhere with a tea focus, because it’s not a given that all freelancers are coffee fiends, and I was drawn to Piacha by an offer I saw on Twitter of free tea.

“What should I say about this place?” I ask Bee, who has joined me for a Peach Earl Grey ice tea smoothie.

“Say it was fine,” says Bee, “and then Beeface walked in and it was amazing.”

From the street you might be forgiven for worrying that there is literally just one table, but fear not, there is plenty of seating at the back and downstairs. With over 25 different teas on offer, you may find that 47 minutes out of your hour of alloted work is spent on choosing what to drink, with the remaining 13 going on taking arty shots of your tea for Instagram. Do try to concentrate a little bit if you can. 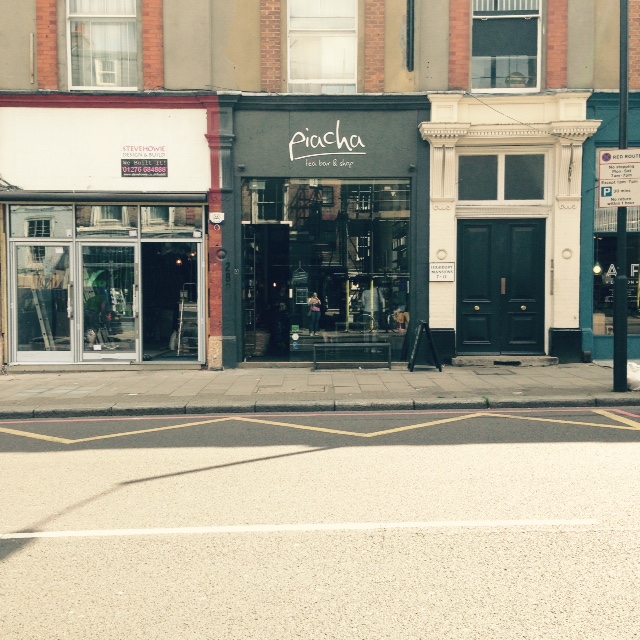 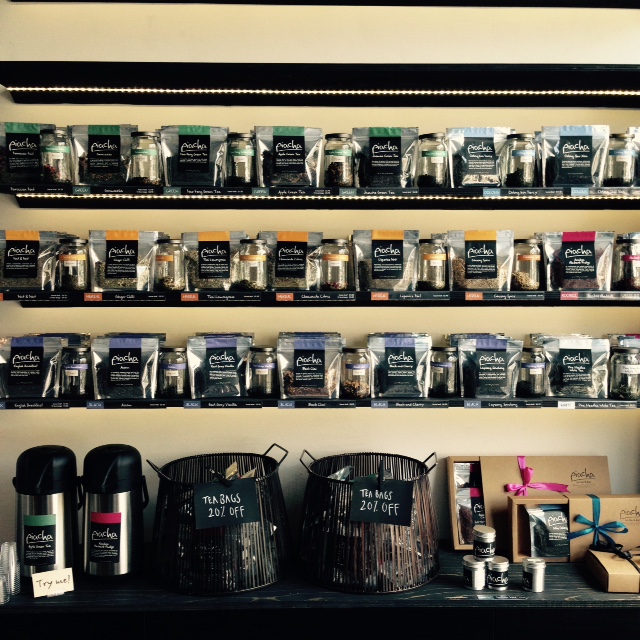 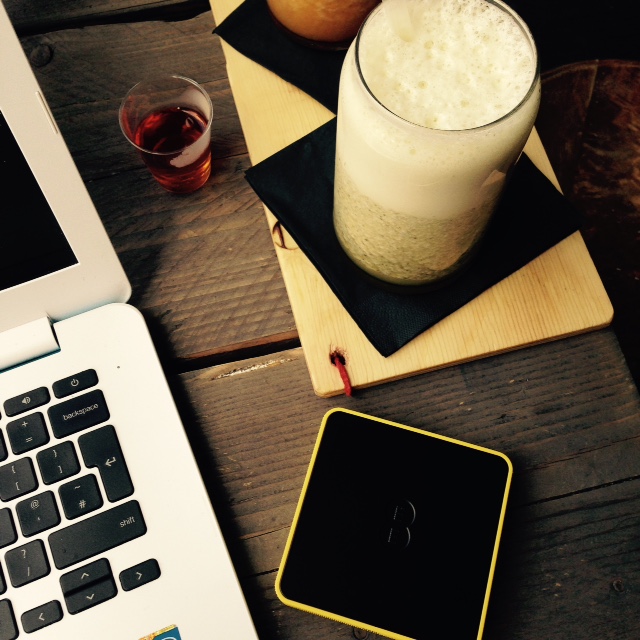 I used the basement cafe at Google Campus a month or so ago for a day long consultancy session with a client and it was ideal. Unlike a regular cafe, where you might feel bad loitering for a whole day, Google Campus cafe is full of freelancers and people having meetings. The food is reasonably priced and delicious – we had very tasty salads for lunch, followed by gluten free salted caramel chocolate brownies.

You have to register as a member in advance, but it’s free and very straightforward. You then get a plastic membership card, which makes you look awesome when it casually falls out of your purse. It did get very busy, so get there early, and don’t forget to tweet about it while you’re there so you can watch your Twitter account pop up on their big screen.

The Wren was my lunch stop on my cafe crawl of London and I was very pleased indeed that it was. It’s in the City, just a couple of minutes from St Paul’s Cathedral, yet the minute you step inside it’s like being transported somewhere miles away from the throngs of financiers just outside.

The Wren is in a church, complete with stained glass windows and vast ceilings, and is the complete opposite of a lot of coffee shops, where low ceilings and squished in tables are the name of the game. The food was excellent value – I had a big plate of quinoa, roast carrot and feta salad for a fiver, and it kept me going for hours. Do go to the toilet while you’re there and check out the floor in the hallway. 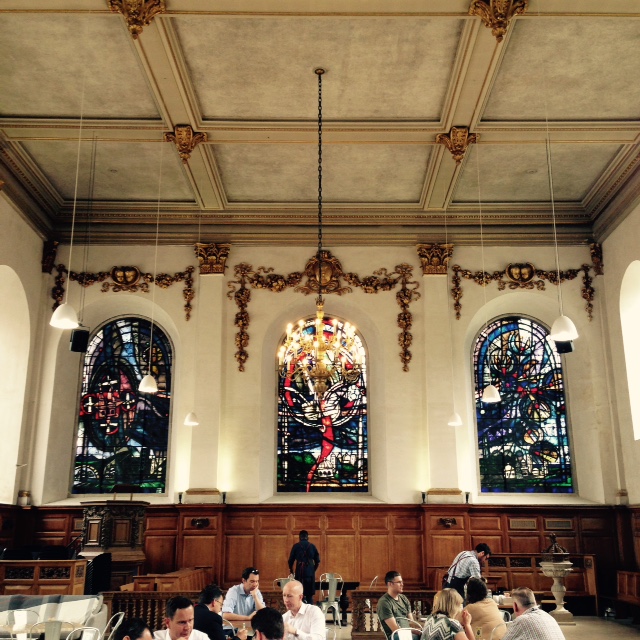 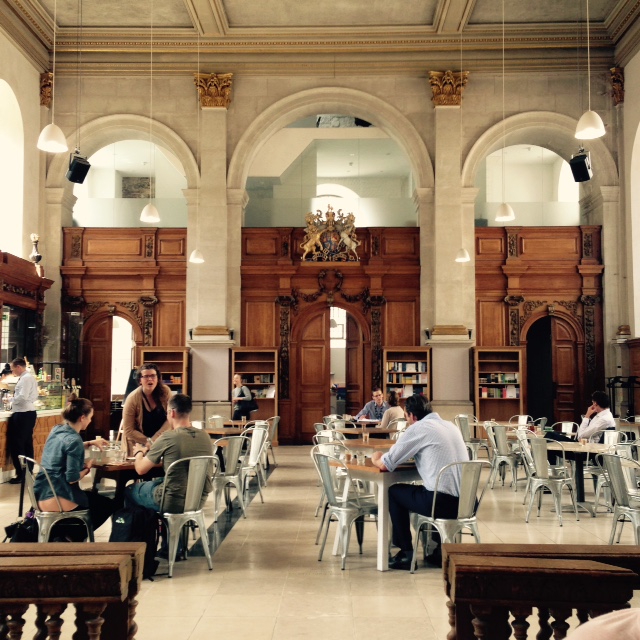 I visited the Trafalgar Square branch of the hugely popular Notes cafe and the first thing that struck me was that you really have to admire an anglepoise chandelier. I liked the table layout, with single tables for if you’re meeting friends and a couple of larger tables for co-working. When I was there the large table at the back, which I think would suit about 8-10 people, had 3 people sat around it, all working individually but creating a very welcoming freelancer vibe. The chocolate cake was very nice and in case you don’t have a fancy 4GEE WiFi Mini like me, the free WiFi from the restaurant next door was very strong.

I went in at about 4.30pm and did feel under pressure to leave by about 5.15pm once I had finished my cake and people where piling in after work. I’m sure it wouldn’t be like this at non peak times though, as it was pretty quiet when I arrived.

Where are your favourite places to work in London? Please share your top tips! 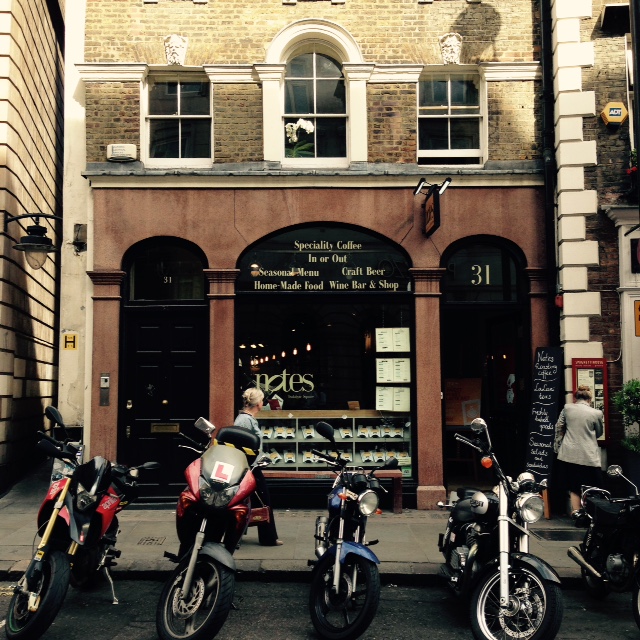 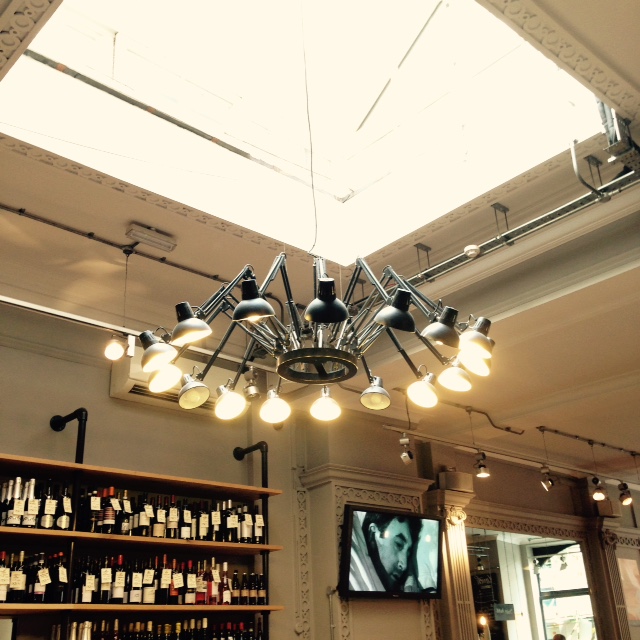 Disclosure: I was sent the 4GEE WiFi Mini from EE for the purposes of this post. All opinions are my own.