Today I have a guest post from my fiancé, because he knows about football and I wasn’t sure who Sir Geoff Hurst was. I did pose for the picture though: 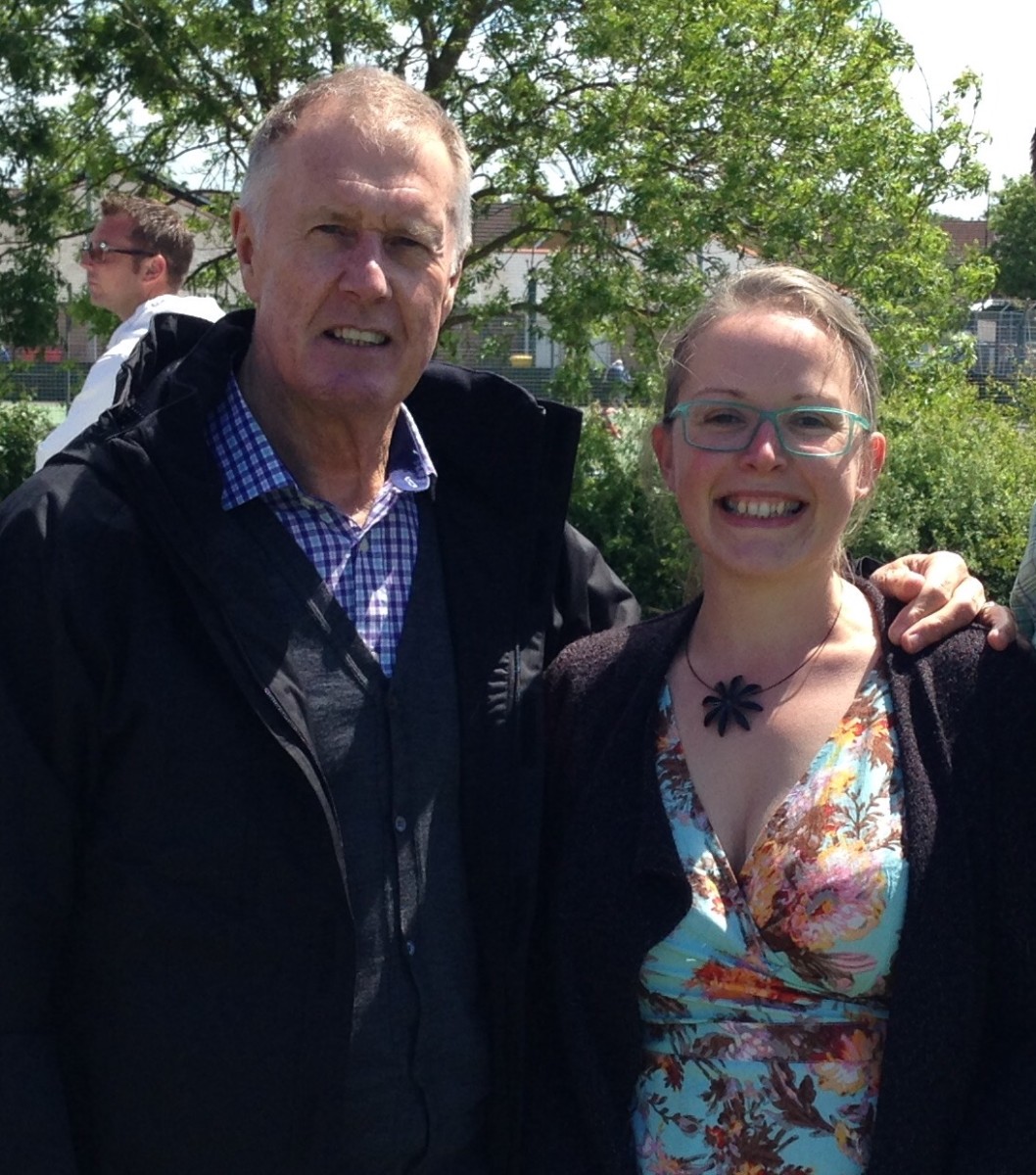 Think of Mcdonald’s, and you’d be forgiven for not associating them with sport at grass roots level in the community. All right, you might think of their logo blazoned on sponsorship boards at every football World Cup in recent memory, but you probably wouldn’t think that they’re that heavily involved in getting children active and involved in their local football clubs.

We were pleasantly surprised too.

“Do you want to come with me to interview Sir Geoff Hurst? “ Jo asked, adding, “is that a thing?” to confirm her understandable ignorance to English footballing history. I don’t blame her for this – mine is sketchy too, but it’s always nice to have superior knowledge to Jo when the majority of the time, on most subjects, I’m metaphorically in her rear-view mirror.

It was a no brainer. The immortal words of Kenneth Wolstenholme sprung to mind, and the hairs on the back of my neck stood up.

Of course, I knew the basics that most armchair sport enthusiasts know about Sir Geoff. He scored a hat trick for England in the 1966 World Cup final and is still the only player to do so in a final. He played for West Ham and Stoke, and with the greatest of respect, wasn’t the greatest manager when he led Chelsea. Other than that, I assumed that like so many sporting greats, his life was now spent on the cooperate circuit doing a bit of after dinner speaking.

How wrong I was.

For a number of years, Sir Geoff has been Director of Football for McDonald’s. Don’t be fooled into thinking this just means he gets free Happy Meals for his grandchildren and has to turn up at Wembley on cold wet February nights to watch dull England friendly matches. Well, he probably does have to do that, but he does much more. About 25 times a year, Sir Geoff goes to community events to see the fruits of McDonald’s work with local clubs.

It’s a simple yet effective structure. McDonald’s sends trainers and coaches into schools to work with kids from the age of five upwards on footballing skills and other exercise. Then, in conjunction with a local club, they’ll organise a community event where the kids from all the schools involved participate in a competition. All the teams leave with a trophy, and the local club also benefits from scouting for fresh local talent.

We went to an event in association with Bradley Stoke Football Club on the outskirts of Bristol. Yes, it was heavily branded with the golden arches, but there wasn’t a Big Mac in sight. In fact, there was a lovely sense of community, and it’s been down to the hard work of the Mcdonald’s franchisee on a local level, which has sponsored Bradley Stoke Football club for over 10 years. “What’s important to the community is important to Mcdonald’s” their manager said.

The cynics might think these types of event are just a cheap way for Mcdonald’s to look vaguely good. They’re wrong. You can’t just throw these events together and drop in a couple of football celebrities. This was over a decade of hard work and empathy to a community that has really paid off. What was meant to be a bit of an excuse for me to meet a sporting hero turned into food for thought on what the big corporates can do for their local neighbourhoods.

Sir Geoff is clearly passionate about the community work, but I couldn’t waste an opportunity. We got to the end of the interview and I asked him what I’ve been wondering since I first knew about the miracle of 1966.

The non-football lovers amongst you might want to reference this:

He smiled, and asked if I had German parents. “What you have to remember is that I’m playing in a World Cup Final, for England, at Wembley. It’s 2-2. At that moment, you want to believe more than anything that that ball has crossed the line”.

That was as good a ‘yes’ as I was going to get. Those hairs stood up on the back of my neck again. The stuff of schoolboy dreams.