I call myself a feminist.

I complain about the representation of women in politics and share my thoughts on pornography and the sex industry, but these are all big issues. I’m not saying they aren’t important, of course they are, but they are the bigger picture.

Recently though I’ve started noticing more everyday sexism than ever before. Partly I think it’s because I’m in a relatively new relationship and this always makes you look at the world in a new way, but it has also had a very tangible impact, not because of anything my boyfriend has said or done himself, (he is always thoughtful, courteous and kind), but because of how his presence impacts how people see me.

I’m used to doing things for myself and by myself. As a single mother I may not always be treated in the same way as a man, but I’ve not often found myself in situations where I am able to make exact comparisons. Now though, with a well spoken, 6′ 1″ man at my side, it has become very obvious indeed.

We’ve just joined a local drama group – a wholesome family activity if ever there was one. It’s a lovely group, lots of fun and something we all enjoy doing together. The average age is a little older than us, but everyone has been very friendly and welcoming. It’s all good.

Except of course for the casual sexism.

It’s the sort of casual sexism that you don’t always notice, because nobody is actively offending me, nothing awful is said, it’s more about what isn’t said. In the whole time we’ve been going, not a single person has asked me what I do for a living. Despite the fact that I could actually be very useful to them, it has apparently not occurred to anybody that I might have a job, let alone something positive to contribute. Even when I ask that very question of other people, they don’t return it. Nobody seems particularly bothered about where I come from either.

Presumably they imagine me keeping myself busy making Belle’s packed lunches and ironing my boyfriend’s shirts. 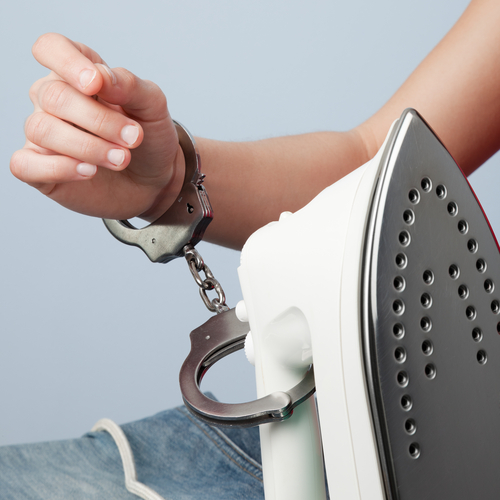 My male partner in crime however is asked all the time. Everyone is keen to find out what he does for a living, because obviously he is a man and thus far more important and professional than me. He has been asked about where he lives and where he comes from and the Director has already suggested he might like to take to the stage in the next show.

There’s a part of me that wonders if I am being too sensitive and wants to make excuses – it is partly a generational thing I’m sure – but does that make it OK?

Am I being unreasonable to be offended by this?

Photo credit – Handcuffed to the iron from Shutterstock.