This week I have been in Amsterdam.

You know how I feel about pornography, but I couldn’t go to all that way and not visit Amsterdam’s Red Light District could I? Even if just to say first hand how seedy it is.

And it IS seedy. Let me tell you though how I got on, and you can tell me if you think it sounds sexy…

I’m in Amsterdam’s Red Light District on my own, and it’s about 9pm, and getting dark. The canal that sits serenely between the two rows of buildings is beautiful, but its hard to look at anything other than the windows framed in red neon, and the bright lights advertising live sex shows, each one claiming a better drinks offer than the rest.

In each window stands a young woman in her underwear and high heels, trying her best to look seductive. Most just look bored. One stands with her hand on her hip, weight shifted onto one foot, checking her phone. Nobody smiles. 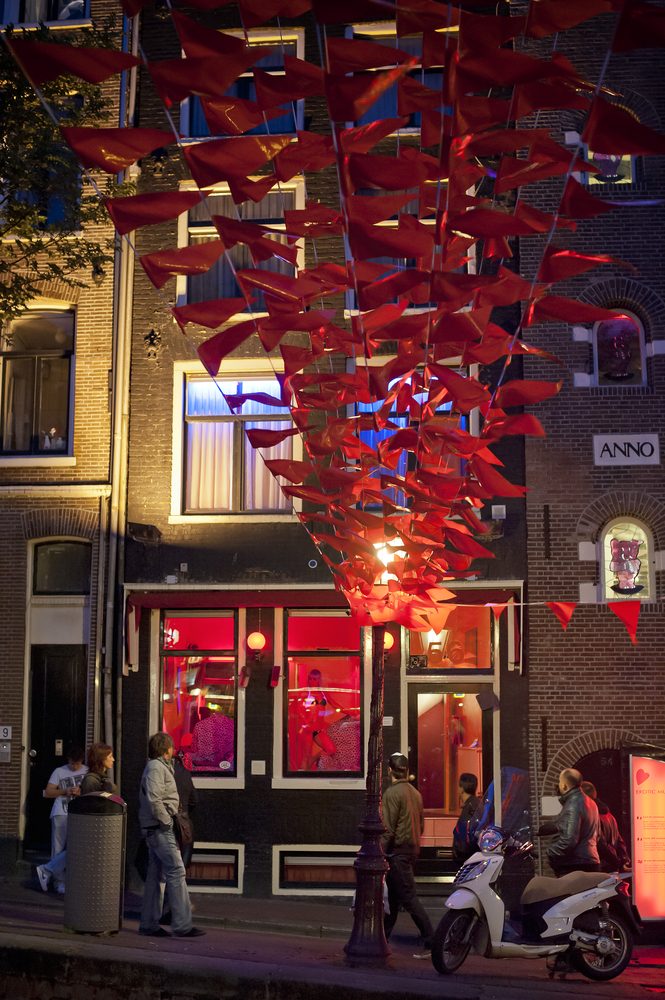 A lot of the attention seems to be on the clubs and shows. “Why are you looking so serious?” a man on one of the doors asks me. “Where are you from?”

“I’m from Bristol in England,” I say. “And I look serious because I think this whole thing is pretty shocking really.”

“I have a cousin in Bristol!” he tells me and I laugh.

“Of course you do! I bet you have cousins everywhere.”

“You think I’m playing you?” he asks, looking offended.

“You think I like this job?” he asks. “I hate it as much as you do. I hate these people,” he says, sweeping his arms and genuinely looking fairly disdainful. “I just sell what’s inside, but I stay out here. You should never judge people. You see me here, you think I’m trying to sell you a lie. I’m not.”

He is distracted then by a young couple, loitering nervously. “Stay there,” he tells me, “I’ll tell you.” He turns to the couple. “You want to come in?” he asks them. “We have four shows, including a cigar show, and our drinks are much better than next door.”

“When does it start?” the girl asks.

It sounds awesome. Who doesn’t want to watch a couple have the same sex they’ve had already half a dozen times that night? I shift my attention to a group of British men sat on some benches nearby, who turn out, surprise surprise, to be on a stag do.

“Look at this!” one of them says, and pulls up his shirt to reveal ‘BAD BOY’ written on his chest in marker pen. “A girl just wrote that with the pen in her you know…” and he raises his eyebrows and points down. “Pretty good isn’t it? The A is a bit wonky, but other than that.” He looks very pleased with himself.

“Do you reckon you could do it?”

Another of the men chimes in, pointing to one of his mates. “He’s just paid 140 euro to have sex with two women,” he says, matter-of-factly. The friend looks a bit sheepish, but he’s smiling, like secretly he’s pretty pleased with himself.

“How did that work then?” I ask, both intrigued and appalled. “Was it two separate times, or both at once? Was it buy one get one free?”

His mate, the one so willing to volunteer the information in the first place, laughs. “Nah, it was buy one, get another at the same time for another 70 euro!”

He hasn’t done it before he says, but just shrugs when I ask how he feels about it. “It was fine,” he adds, not giving much away.

“That’s not what you said at the time!” says his helpful friend. “You came out and high-fived all of us!”

“So do you really think this whole set up is sexy?” I ask. “They just look bored to me.”

“One of mine was on her phone a lot,” he laughs.

“She was tweeting,” adds his mate. “I bet she was using the #worstsexever hashtag.”

They tell me about the live show they’ve just been to. Apart from the chest writing, they aren’t impressed, particularly not by the man who was dressed in a leotard, which he just pulled carefully to one side for the act itself.

“They were really old,” one of them adds. “And he was wearing kneepads!”

“Was it like watching your mum and dad do it?” I ask.

Have you been to Amsterdam’s Red Light District? What did you think of it?

*They did let me take their photos, and were happy for me to blog about them, but I’m thinking that the morning after, it might not have seemed like such a good idea. Would you want your photo on the internet with the caption ‘this man just slept with two prostitutes’?