Weather permitting, tomorrow I am flying out to New York to interview some of the cast of the new SpongeBob movie: A Sponge Out of Water.

Who am I kidding? I am about as chalant as it gets. (Why is chalant not a word? You feel like it should be.)

Firstly, there is the snow. I’m not good in snow. I will fall over and it will be embarrassing.

Second, NEW YORK BABY!! I have only been to America once and that was to go to Arkansas. Even the guards at airport security looked at me funny and asked me why I was bothering.

And finally – the thing I am most chalant about – I have to conduct video interviews with celebrities. When they asked whether I wanted to do written or video interviews I figured ‘in for a penny’ and all that, and so said video before I had chance to think about it. I figured it would look far more impressive and then you would know that I had actually been there and not just sent an interview by email. 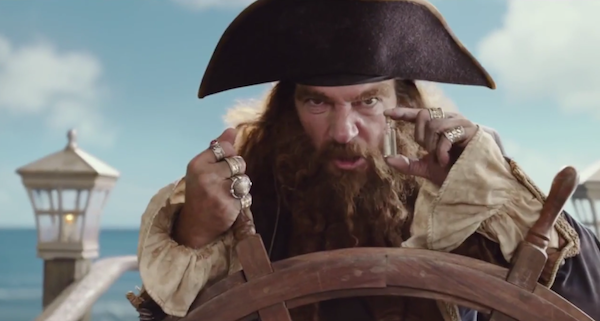 I will be very disappointed if he doesn’t do the interview in full pirate costume.

The truth of the matter is though that I have to look up in the instruction manual how to even switch my camera into video mode. I have no idea even if I am meant to take my own camera. I am going to have about five minutes with each of the celebs and I suspect that four and a half of these could be taken up by me trying to figure out how the camera works, only to get home and discover that what I actually have is a series of blurry photographs.

You know Bridget Jones? You know how she slides down that fireman’s pole and lands in the pigsty? (Separately, but still.)

Anywho, while I rush to download the first SpongeBob movie and try not to have a mental breakdown about the whole thing, I thought that you could help me out by coming up with some questions for me to ask. I will be speaking to:

So, what would you like me to ask them??

And also, what interesting stuff should I do in New York while I am there, once I have recovered from the kerfuffle of the interviews? I can’t miss the opportunity to fill a couple of the spaces on my 40 things before 40 list after all.