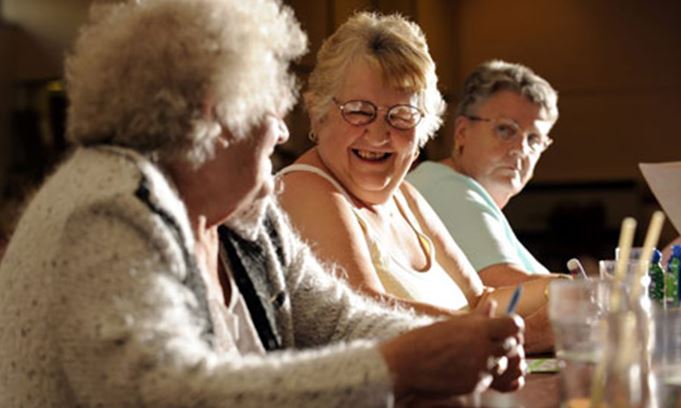 I’m sure we all have the same preconception of the stereotypical bingo player. Not exactly a great advert for what i believe to be one of the best forms of gambling available to us today. You usually think of a trip to a bingo hall and you’re probably thinking about groups of retired ladies, all with the same blue rinse, jostling for the best seats, handbags full of those special bingo markers. (I do think the woman on the right looks like she might have a jab with her pen if you don’t keep an eye on her.) Sure, you’ll still find the older demographic in bingo halls around the country, but think about any advertising you’ve seen recently for bingo – both online and in bingo halls – and you’ll probably recall images of groups of younger women rather than the stereotypes that you’d expect.

The cynical amongst you may be thinking, “Yeah, but are those adverts just trying to attract a new demographic that they don’t have, positioning bingo as a younger person’s game before all of their customers die off?” The answer, actually, is no. Go to any bingo hall and you’ll see groups of younger women and even – shock horror – MEN! Who’d have thought it.

It’s the same online, with sites such as Titan Bingo definitely aiming for a younger market in terms of their branding – and it’s hardly surprising that they’re succeeding. While the number of “silver surfers” is constantly growing, the Internet is still populated by a younger demographic than the world as a whole.

It’s actually a pretty sociable game to play online as well, which may be surprising for some. While you’re playing, you get to enjoy the live chat functionality of the site, and you’ll find that the majority of online bingo sites also include chat games which can win you loyalty points that you can convert into bingo funds, giving you even more chances to win. It means that you can be playing alongside people from all over the world, making friends online that you’ll no doubt see time and time again as you continue to play. And when you’re playing and chatting online, nobody cares about how old you are – it’s a pretty sociable world to be in, where age is completely irrelevant.

You’ll even find cases of people meeting up with others that they’ve met on bingo sites, and becoming friends in “real life”. In traditional bingo halls, talking while playing is often frowned upon, as players will risk missing the numbers that are called if the room is too loud. Online, however, is a different kettle of fish – there are no restrictions on when the chat functionality is available, and you can choose to set your cards to “auto-dab” mode to make the game even easier, and to avoid the risk of missing numbers that are called. For this reason, many online players choose to play while they’re doing other things, such as chores, watching TV or even working.

We’re also seeing the rise of mobile bingo sites and apps, which are played via smart phones and tablets. Again, with this method of playing, you need to erase those stereotypes from your brain…there’s no way these companies would have spent the money and effort on developing more modern ways of playing if they were still targeting the stereotypical bingo playing audience.

I mentioned men earlier…and it’s true that more and more men are starting to play the game, both online and in bingo halls. Look at the recent winners lists on Titan Bingo and you’ll see that not all of them are female – it’s a game that appeals across all demographics. And, if you think about it, it’s unsurprising that so many men are interested in the game. Bingo was created by a man in the 1530s in Italy in the form of a lottery called “Lo Giuoco del Lotto D’Italia”, and it was another man – Edwin S. Lowe – who developed it into the game we know and named it “bingo” in 1920s America.

The lack of constraint also appeals to younger players – with the rise of online bingo sites, you don’t need to commit to a night at the bingo hall to play. Instead, you’re able to play wherever you want, whenever you want and for however long you want – and you can even pre-buy tickets for big jackpot games so that you don’t miss out on the chance to win huge prizes, even if you’re busy at the time of the game. It’s partly due to the rapid advances in bingo technology that its appeal has become so widespread, turning it from a pre-planned evening out into a game that can be enjoyed for a few minutes at a time in between work, chores and other things.

There’s no denying that bingo is a game of chance, and it’s this element that makes it so satisfying when a win comes along. And, let’s be honest, everyone loves the chance to win something, no matter how old they are. While an evening at an old-school bingo hall was always a pretty sedate and slow-paced affair, online bingo appeals to a younger and more varied audience thanks to its speed and the low costs of tickets, with some available for as little as 1p each. There’s also far more going on online, with chat games, regular large jackpots and, on some sites, the chance to have a flutter on online slot machines between games. Various surveys estimate that more than three and a half million people now regularly play bingo online in the UK, with around 20% of those aged 18-25. It’s definitely not just for old ladies anymore…